In the middle of the night we find Lee asleep.. in his pyjamas.. and.. with nooooo light on!!! Poor Lee he must be scared silly! 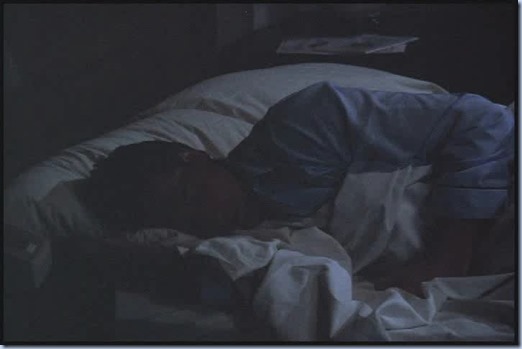 Okay, I can hear it now – there’s enough light coming through the window that it didn’t matter! Sorry but I don’t think I’ll ever get on board with Lee being afraid of the dark!

Hmm he seems to be a side sleeper..
What side did he prefer to sleep on in Utopia now?
Lee: I like to sleep on my right.
Hooray!!! continuity!!
More continuity- we saw Lee’s blue pyjamas in If thoughts could kill.. remember?! Am I obsessed with sleeping Lee? Yes I am.. and so what?! 😉 tee hee..
Anyway.. I digress.. Lee’s sleep habits are just so much more interesting than this episode! ahem..
Suddenly, Lee is jolted awake by shouts out in the parking lot. 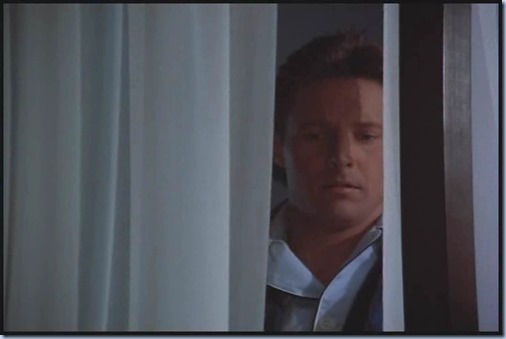 This is exciting! Because he’s watching the baddies? 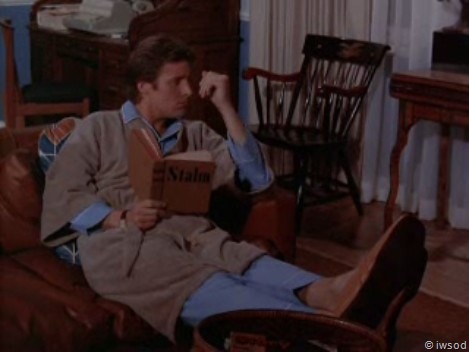 nahhh because he is no longer wearing the ‘he’ robe from his He/She set!!! Remember it?? Does it mean something?? 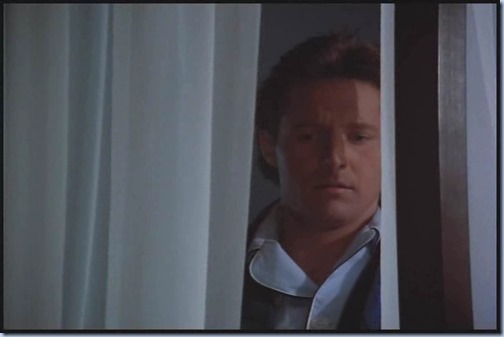 Okay okay.. focus iwsod!
Carla (off camera): I want it ready tomorrow! No delays, no excuses!
Finally we see what’s going on outside.. lame baddies!

Bendix the weasely wimp agrees… Carla bosses Barry around and tells him to come with her as they leave Bendix.
Barry (indistinct): You have something in mind?
I don’t get the Barry character at all.. nor his relationship with Carla.. is she his boss or lover? For me it’s all pretty unconvincing and uninteresting.
Yes.. let’s cut back to Lee in his pyjamas..

There.. that’s better – now I’m interested!
This is all super complicated.. Can Lee work it all out?! Rofl..
The next day, the birds are chirping and we are back at Marvellous Marvin’s HQ – and Yep I think that writing on the curb there says ‘Columbia Pictures’ rofl!

Inside we find Amanda and Marvin having their random breakfast ‘date’.
Ugh.. look at all those creepy burgers!!! That’s enough to turn me off my breakfast!

Amanda: Well, my boys are gonna be very impressed when I tell them that I had breakfast with Marvin Metz.
Marvin: ha haa.. Heck, I do it every morning of my life. [I’m laughing on the inside.. somewhere..]
Amanda: Heh.
Marvin: Nothing special about it.
Amanda: Well… you must be awfully proud of all the things you’ve accomplished.

Marvin: Sure… I, uh, worked most of my life for this. (tsks) And now that I have it, I guess I miss sharing it with… someone.
[lol again, it sounds like a pick up line! Marvin has that knack! Is Amanda wondering if Marvin will make her an offer?! hmm.. maybe not

haaa
Amanda: So you’re alone, then, are you?

Marvin: Except for my son, Barry… [in other words, yes I’m alone!] …Some son. Huh. Laziest person I’ve ever known. Thirty years old and he still expects the world to be handed to him on a platter.

[Ouch. Tell us what you really think of Barry?! Is it just me or does this all seem kind of – BAM! Hello nice to meet you, my son is a lazy idiot who is a thirty year old brat with a sense of entitlement?!!!
I have no admiration for Barry based on what I’ve seen- but I’ve gotta say, Marvin talking down his son like this to someone he just met, who is looking at buying into the company, is just poor form. Makes Marvin even less likeable. I’m left with the impression that Barry and Marvin are equally to blame for this big mess! ]
Amanda: Oh, gee… that’s too bad.

Marvin: The kid’s impossible. I have him working here, but it’s… like trying to put a square peg in a round hole. That’s the story of my life, lately.
[And yet you let him work there. Keep him around but criticise him openly to people you don’t know? Hmm not a fan of Marvin, but I’m pretty sure I’m suppose to think this is Amanda’s amazing people skills at work, and I’m suppose to feel sorry for this old, alone man]

Marvin: It was the same with Carla.
Amanda: Carla?
Marvin: Oh, hah… (waves his hand) It’s not like me to be running on like this.
[Yes Amanda has magical powers with people! I guess Marvin was old, lonely, and looking for someone to confide in..sorry I’m such a grouch when it comes to Marvin!]
Amanda: Oh, no—that’s all right.  You don’t have to talk if you don’t want to. 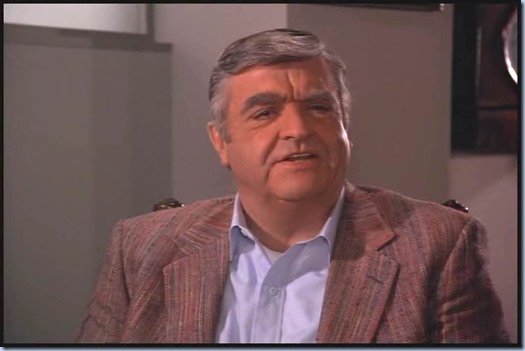 …Carla’s my… executive assistant. She and I got

involved about two years ago.  I was lonely, and she was working as my secretary. Same old story, except it meant something to me. I found out that she was cheating on me with one of our regional managers.
[And she’s still working for you??!! How convenient for Marvin to tell Amanda all this.. and for no reason whatsoever.. ahem.. Oh wait. Eddie was a regional manager (they’re some big hamburgers!) .. maybe Eddie was recruited by Carla for her evil cunning plan but he refused to play!]
Amanda: Well, that must have been very difficult for you.

Marvin: Broke my heart. But I… 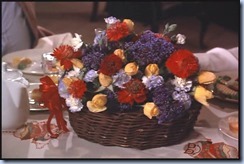 (Shot zooms in on the flower arrangement on the table.)
… I’m thinking of making some changes around here, anyway.
We cut to another room, where Marvin and Amanda’s conversation is being listened in on.. Uh oh!!! It’s the old bug in the flowers trick- again!!!

It’s Barry and Carla listening in on Marvin’s glowing reports of them! eek!!!
How is it that Barry could start up something with Carla when Carla had been with his dad?! ewwwwwwwww!!!!!
You know for a family show.. this is a bit racy! (and ick!)
I’d more easily believe if Carla was blackmailing Barry.. but as it is.. this is all seriously lame and makes no sense to me.
Marvin (off camera, through the recording device): So, uh, maybe it’s time for this old buzzard to kick Carla and Barry out of the nest and… see if they can fly by themselves…
(Well, one flew over the cuckoo nest.. let’s see if two can!)
… They’ve had plenty of time to learn the business.
(Carla snatches up the portable speaker and throws it across the room. ) Whooo she means business- She threw something!
Is it just me or did the camera jump when she threw the speaker?! Maybe it was an ad-lib! to try to make Carla more interesting as a baddie.. fail!

Carla had enough.. : We’ve gotta move now. We start tightening the noose around that old man’s neck and around the Stemsons’ too. We’ve come too far to let them get in the way now.

Time to put the evil mastermind Carla’s plan into action.. you know.. the one she was yelling about in the middle of the night for everyone to hear?!

Anything you’d like to share about this post or the ep so far?? Sorry if you love Marvin, but I’m just not connecting with the guy at all.. I suspect it’s because the writing is very clunky. Not even knowing Marvin plays Jerry Seinfeld’s dad is saving it for me! The actors are trying valiantly with this one…but I’m starting to think this ep should have been called Fast Food for very slow thought! What do you think?? byee for now!!