Back at the hotel again, we find Lee and Amanda exiting the elevator.
Lee: Amanda, that was very good work. Really, it was.

…That was just spur of the moment stuff. 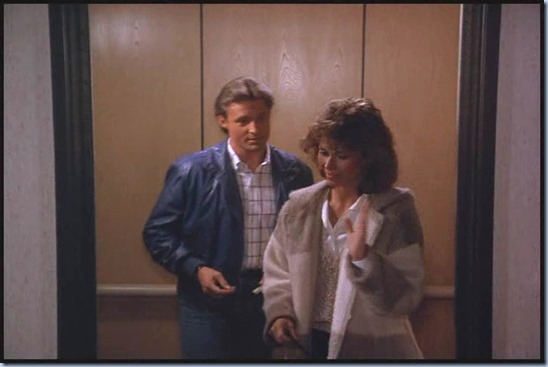 Lee: Spur of the moment? It was natural, spontaneous…
Amanda: Look, I’m just glad you got out okay.

Okay this can’t be a coincidence, this has to be intentional! err maybe?!  This reminds me (and maybe you too?) of another scene were Lee and Amanda have just exited an elevator! In Over the Limit.
Amanda: … You were really really good. How did you learn how to do that? 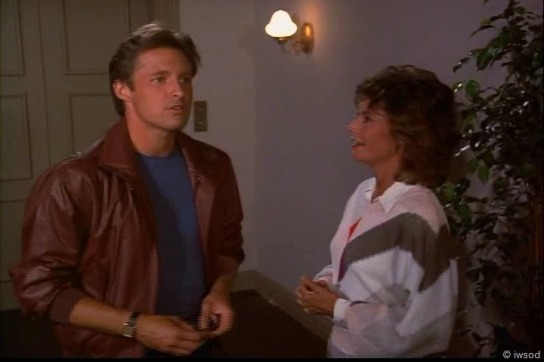 Lee responds to Amanda’s question: Ohh I don’t know….…It sort of comes out naturally.
Amanda: Oh it was good!…it was really good.
Lee points at Amanda: you were pretty good yourself…

And on it goes! but.. Interesting how Amanda was excitedly complimenting Lee, and now Lee is taking the initiative and praising Amanda’s skills on the job without any prompting! Plus.. interesting that in both scenes, the concept of ‘natural’ comes up – Lee is a natural.. Amanda is a natural.. together – they are a natural.. and yes.. this is ‘much more natural’

I digress…. and back to Fast food for thought! Back to the back of Lee and Amanda.. ahem..
Lee: Well…
Amanda (pointing to the vial): What is that stuff? 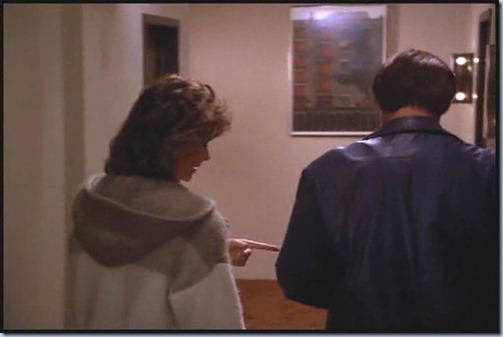 Lee: I don’t know. Eddie was a real pro. His pictures led me right to it. [Not bad for a ‘flake’ take it back Billy! I guess he’s a flake because we don’t get one of those ‘he saved my life once’ stories! lol.. ]
(They pause outside Lee’s room.)
Amanda: Hmmm…

Lee (continues): The lab boys’ll have it analyzed in a matter of hours. [Lab boys huh.. you can have girls in Labs too thanks very much!
Call me crazy but umm the lab boys can’t analyse it until you give it to them. Umm why exactly have Lee and Amanda returned to Lee’s room with the vial?! Makes no sense.. ]

Lee unlocks his door, and puts the vial into his shirt pocket as he starts to walk into the room; You can call me crazy again.. but I wouldn’t put a vial full of a possible chemical weapon in my shirt pocket like that!
Lee stops.. uh oh.. the room has been tosssed over..
Actually, it looks suspiciously like Eddie’s room when that got tossed – just a few strategic pictures changed.. a different camera angle.. I think it’s the same. LOL

Well, it’s enough to distract me anyway! LOL…
Lee moves further into the room and re-holsters his gun. Amanda leans over in the doorway to peer into the bathroom. 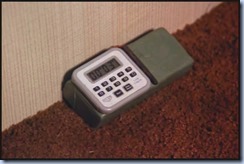 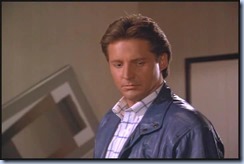 Shot cuts to Lee, looking down at the floor.
And lookin good.
He looks toward Amanda..

Lee rushes toward Amanda shoving her out into the famous hallway.. yelling: : Amanda! Get out of here!
He closes the door.. and things go Boom! (my ode to Burn Notice! BN fans will get it!
Lee jumps on Amanda covering her from the blast. 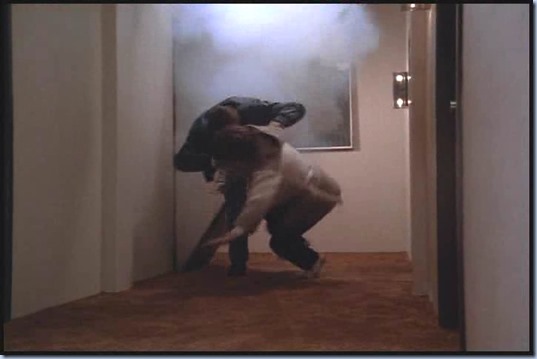 They sit up and look toward the destroyed doorway

Lee turns to meet her eyes..

Uh oh.. things just got serious!
They  look around still a bit stunned.. Umm lovely to jump on Amanda and protect her and all – but you do have  vial of some potentially powerful chemical weapon in your shirt pocket there Lee.. if it’s not all over Lee it would probably be  all over Amanda! lol.
End scene.
Poor Foxrun Hotel.. they’ve had a bad (fox)run of crime in their rooms of late

We find Lee and Amanda walking through the hotel lobby in a bit of a hurry.
Lee: You have to get packed. Someone’s starting to play hardball, and that’s when you pick up your mitt and go home. 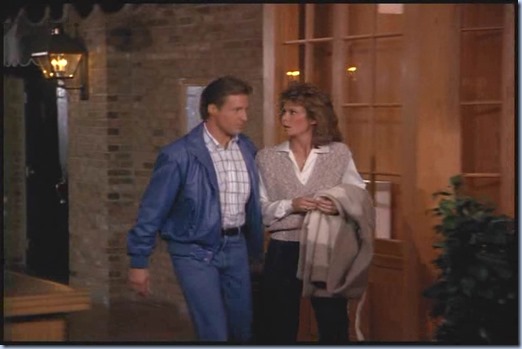 Amanda: Yeah.
[hmm interesting, she’s not fighting it.. what do you make of this everyone?]
Francine joins them in the lobby.. 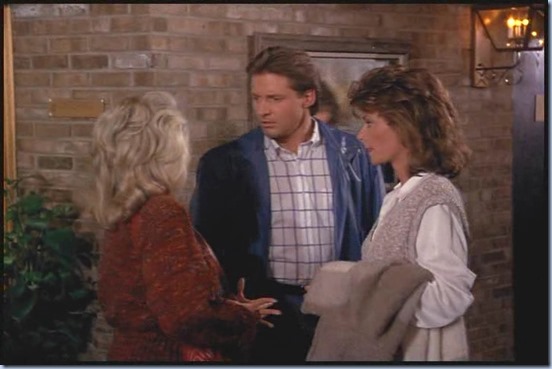 she fills in Lee (and accidentally Amanda lol! 🙂 ) on what their industrious little worker Billy has found.. apparently the vial 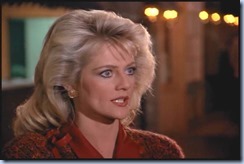 contained a potent poison called Scion – which was developed by the army.. at Fort Detrick of all places.
[So Umm how did they analyse it so fast? 2 seconds ago Lee had it in his shirt pocket and it was being blown up? and I thought as Lee and Amanda rushed through the lobby here they were quickly getting Amanda out of there because the bomb had just gone off and it was getting dangerous? help??
It makes no sense.. yet again!
It feels like the bomb in Lee’s room was added short notice to add some excitement to this rather dull part of the ep.. (thus my rocky horror picture show meme).

Anyway, all this leads them to suspect Bendix.. man.. are you following this plot? such a tricky one this one. so super complicated. Poison in vial by Bendix. super simple to figure that one out. Now that is some extra special sauce right there!! LOL.. 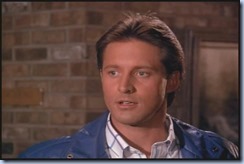 Lee finishes off saying lets go find out why Bendix is mixing up a batch..
So what happened to Francine not knowing Lee and Amanda? I guess suddenly none of that matters? Hmm whatever.. they all head for the door.. 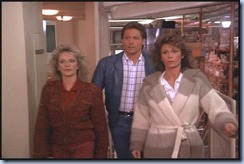 On to Marvellous Marvin’s HQ.. and upstairs in the factory, we find Marvin coming out of Bendix’s office in a panic. 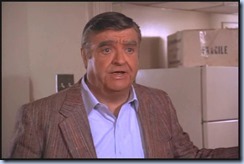 Everyone stands around looking shocked that the side kick baddie who had provided the poison and was no longer needed was now dead.. meh.. 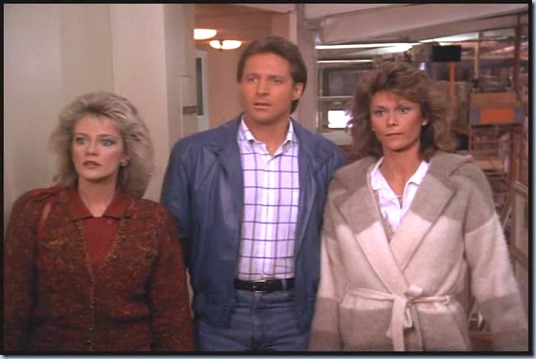 ]
Hey does it feel like I’m skipping bits and finding this pretty uninteresting? that’s because I am!

Anyway, I’ll finish here for now – so what do you make of this part of the episode, or the episode so far? Anything you’d like to share? Bye for now!