Lee looks at Amanda, still smiling, and puts his hand to her back and steers her toward the elevator. 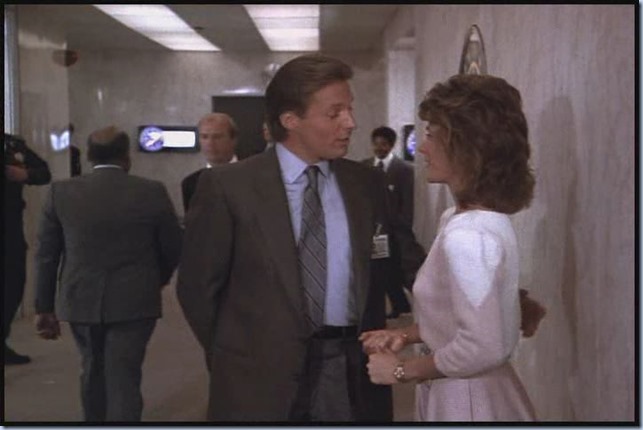 Lee: Well, how are you feeling?
[she loves you –you fool! lol.. err that’s not what he meant? too soon? yeah.. you’re probably right! ]
(Lee and Amanda start slowly walking down the hallway.)
Amanda: Oh, I’m all right. You know… 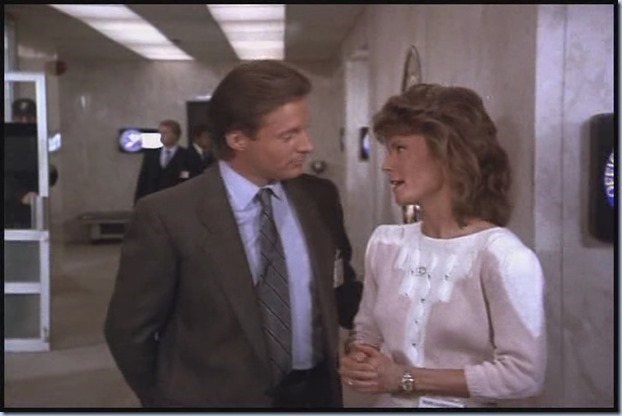 …When I think about it I can still get a little cold. 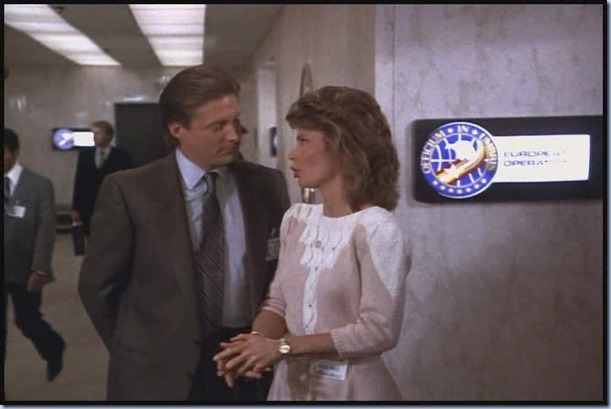 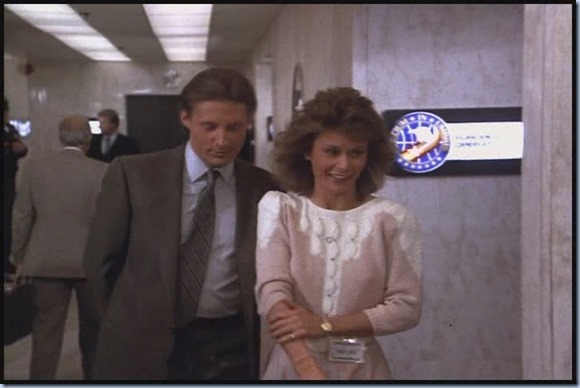 Lee: I’ve got just the cure for that.
Amanda: Oh, you do, do you?
(They pause at the elevator doors. Amanda pushes the elevator call button, and they turn to face each other.)
Lee: Yeah… 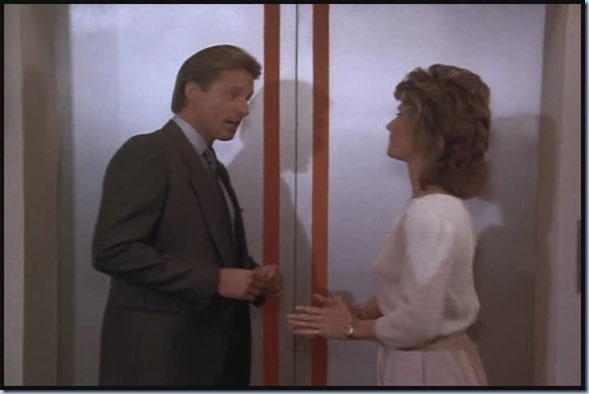 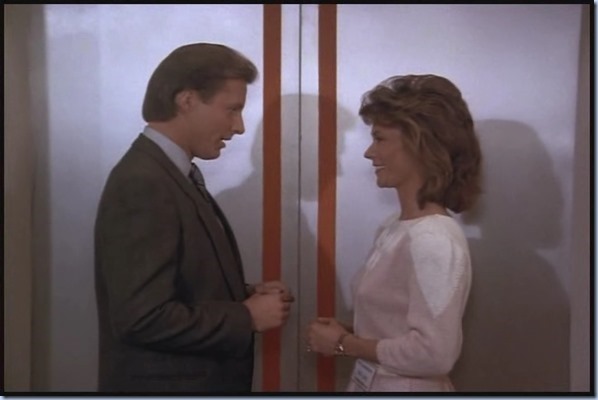 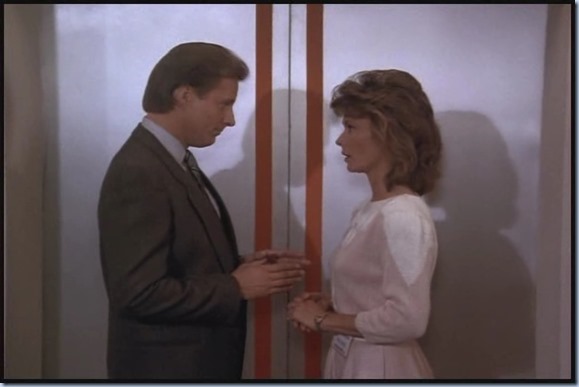 [oh my.. what an interesting choice of words – time.. is Lee saying here he knows moving into this new phase of theirs will take time? Maybe that’s what Lee learned in the milestone hallway scene?! I like to think so.. it’s a work in progress.. Lee’s working on it! Hoorah!]
Lee continues: … and dinner…
Amanda: Oh. 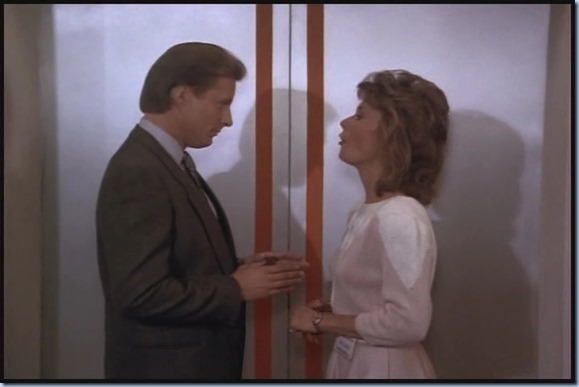 Lee: … and a very special bottle of wine. 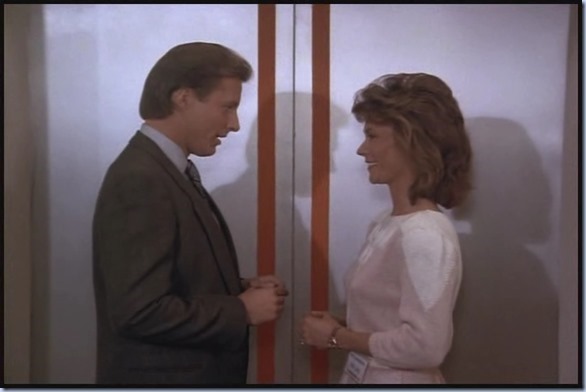 IMHO Lee doesn’t smile here until he sees Amanda smile in response.. which (again IMHO) indicates Lee wasn’t assuming Amanda was up for it. 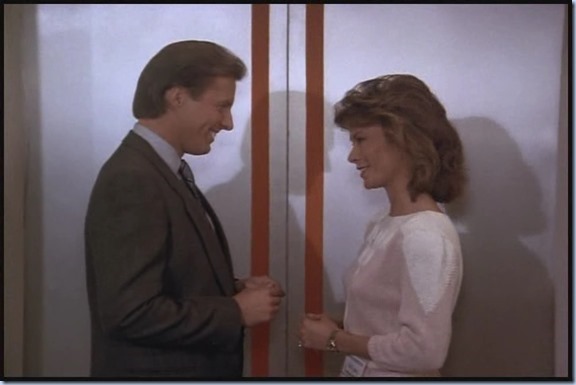 [LOL there Lee goes with the wine again! 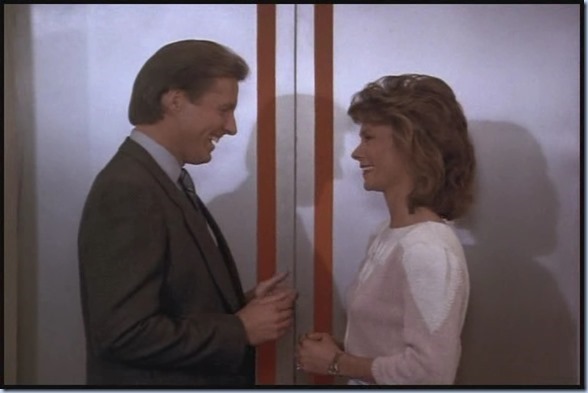 Lee  chuckles and looks around, not wanting to be overheard:  By the way, uh… 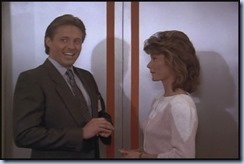 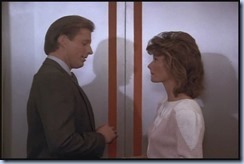 Amanda: Mm?
Lee: Did you buy those chocolates for Francine? 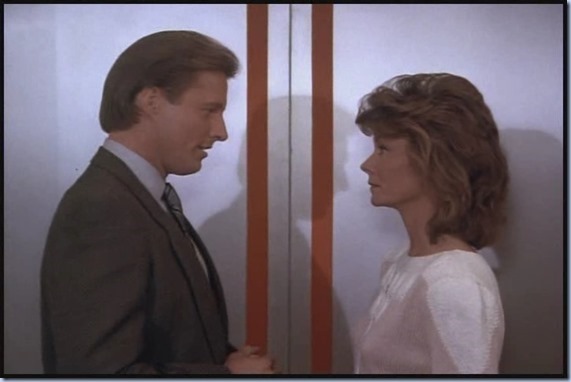 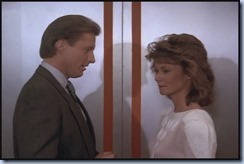 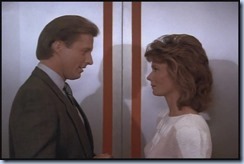 Amanda: Once on the lips,…
(does Lee look at Amanda’s lips here?) 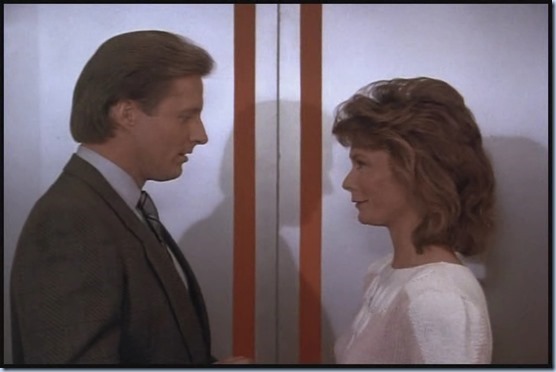 …forever on the hips. 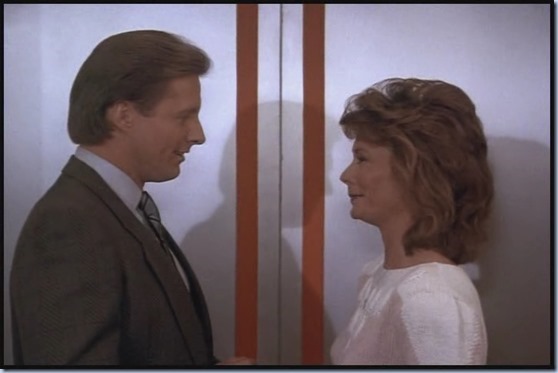 Amanda cracks herself up laughing.. 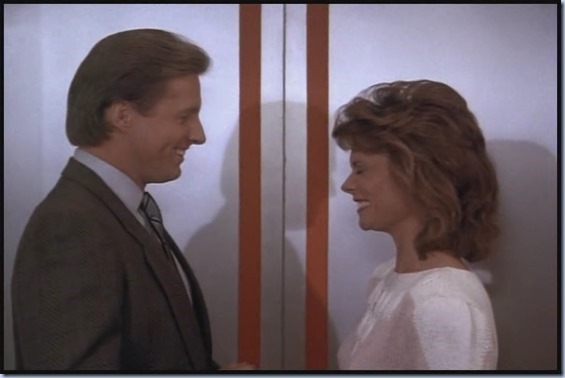 (I love this cheeky little laugh of Amanda’s!) 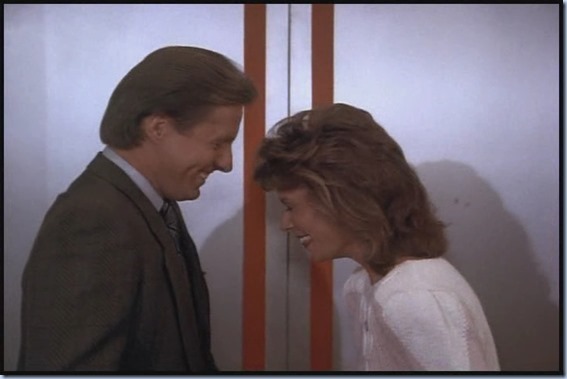 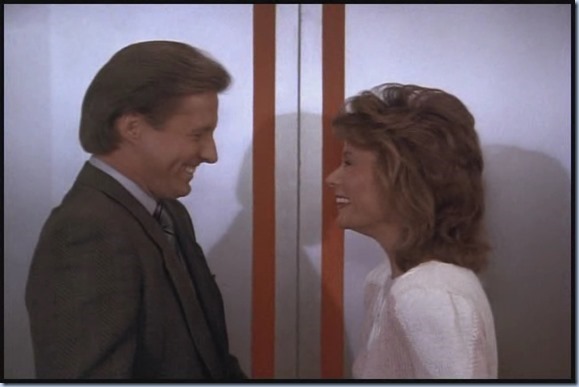 and they share a laugh.. these two are as thick as thieves!!!

This moment by the elevator is burned on my brain. After 20 odd years of seeing zero smk and forgetting it existed (yes I really did) – about 8 years ago I was babysitting at a posh place that had cable and flicking the channels – and I came across this tag. I was stunned!! wha?? this is smk ? on TV in Australia??
I think the last episode I had seen was If Thoughts could Kill – so it was a huge shock to jump from that to this tag – I was transfixed by how close these two were now – The connection between them was clearly visible,  openly expressed and welcomed by both of them.. It was such a stark contrast to now see Lee and Amanda laughing about their shared private knowledge… At how Amanda got Francine good!

I also think the two of them are now teaming up to force Francine to become more human.. and accepting of Amanda..

And what of this dinner and special wine?!! Amanda seems to accept this suggestion happily – IMHO it’s not a shock, but nor is it yet fully ‘routine’ you know? What do you all think??

And I totally think these two are dating – and just not yet calling it that!! (‘it’s going to take some time’!)

I think Lee was wise to not interfere in Francine and Amanda’s relationship – I think if Lee had stuck up for Amanda on a personal level that only would have made Francine worse. So I think Lee is thrilled to see a little ‘thawing’ and interaction between Francine and Amanda due to whatever it was that went on in that freezer – hey! secret women’s business!

Hey is De Verona chocolate for real? I always thought it was Vahlrona chocolate.. num num…  but I’m now hearing De Verona too.. Maybe they weren’t allowed to mention the brand (without being paid $$! ha!) ‘Ecstasy assortment’?? that is flippin hilarious!!! I can just picture Francine in the xerox room eating them after this very scary encounter with Amanda – acting like they are friends! eek!! And scary that Francine’s mask and resolve is slipping.. who knew chocolate could be great for world peace..

I think this is an ep to focus on Lee and Amanda and fast forward the baddies.. really.. I don’t think we would have missed anything- Some tea sipping, weird props or the baddie phone were lacking me thinks.. But the Lee and Amanda bits we got are so great – it makes this episode well worth watching anyway.. and hey.. we can always just payout on the baddies and dumb bits!
Anyway.. I best leave it here – can’t wait to hear what you all make of this tag.. and of this ep overall..