It’s tag time! It’s night at IFF and whooo Lee’s nabbed the sacred car spot out the front of IFF!
We find Amanda exiting the elevator a gold box in her hand.. and she greets an agent getting in after her.

Amanda looks down at the gold box, and seems rather pleased with herself! 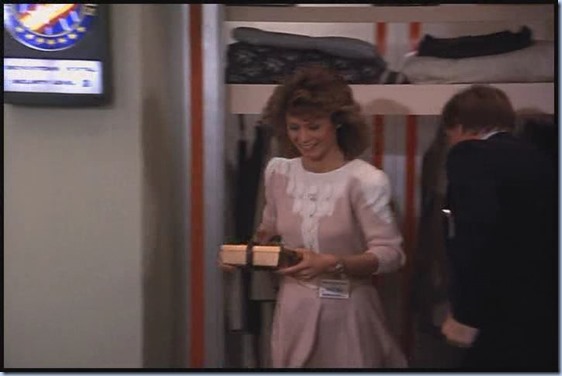 Amanda rounds the corner letting out a massive, satisfied sigh and she sees Francine exit the bullpen in front of her, her nose in a file and not yet noticing Amanda..
So Amanda hides the gold box behind her back.
Francine looks up and sees Amanda approaching. 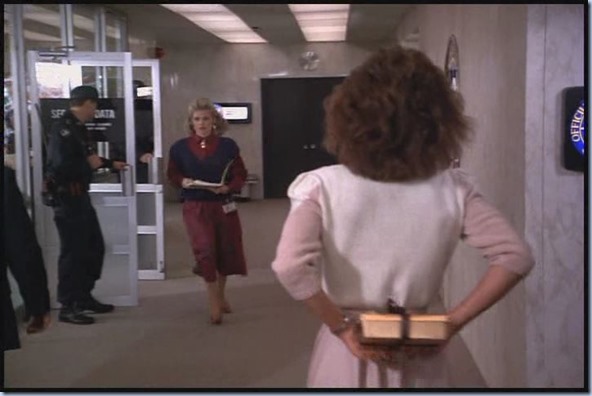 Oh my gosh.. Francine has huge blue paisley patterns on her burgundy outfit??!!! and that cardy?? Oh my.. I do believe Francine is starting to dress like Amanda!
Francine lightly touches Amanda’s shoulder while she looks about.. 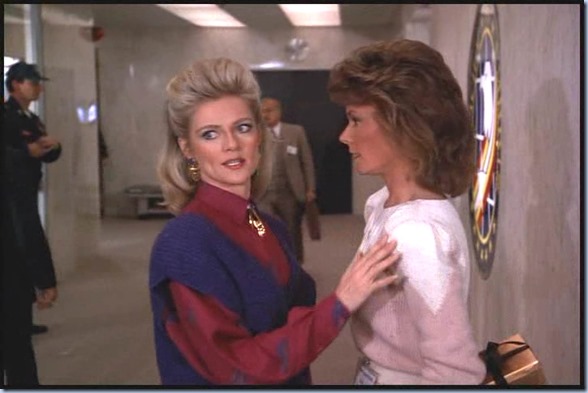 Francine (In serious quiet tones): Amanda, I want to talk to you.  …Uh, it’s about you and me in the freezer.
Amanda: It was kind of nice, wasn’t it?… 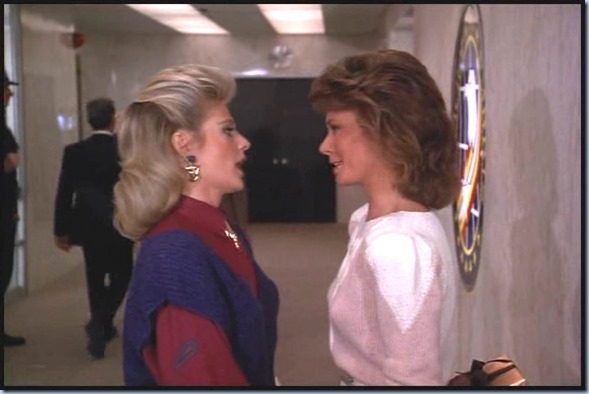 [Hilarious how Amanda goes to touch Francine on the arm.. but thinks better of it. rofl.. I think Amanda is not oblivious to what is going on here. IMHO she knows exactly what she’s doing]
Francine: Yeah, but, ah… you know there is a very strict code of confidentiality at the Agency?

Francine: All right. Well, I want you to know that none of that ever happened. 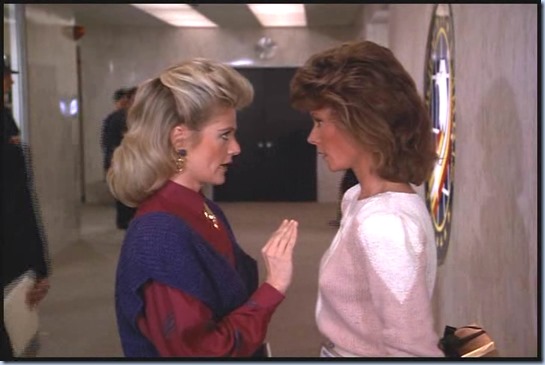 Amanda: None of it ever happened?
Francine: None of it. You understand?

Deja vu everyone?? I think this is deliberate..(what do you think?)  it’s a revisiting of Lee and Amanda’s moments here in this same hallway, in two other tags no?
It especially reminds me of the ship of spies tag – only this time, it is Amanda worming her way into Francine’s affections and Francine fighting it and trying to deny it lol!!

Interesting.. I know I said earlier that Amanda was use to having to assert her contribution to a partnership, having already gone through that with Lee – here she is confronted with Francine doing what Lee use to do.. haaa.. Francine doesn’t stand a chance!

Amanda sets about turning the tables on Francine.. (IMHO putting into action her cunning plan! muahahah!)
Amanda: Yeah, well what am I gonna do about these? 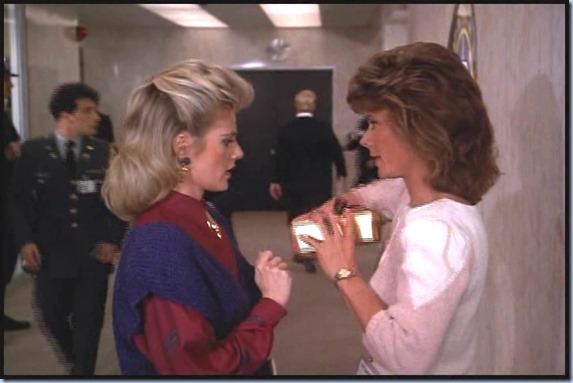 rofl.. Francine is transfixed.. look out! Now Amanda knows her secret Amanda may just become a real friend yet! 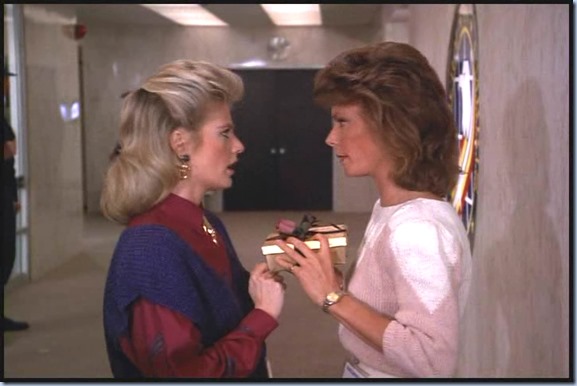 …But, uh, if none of it ever happened, then… 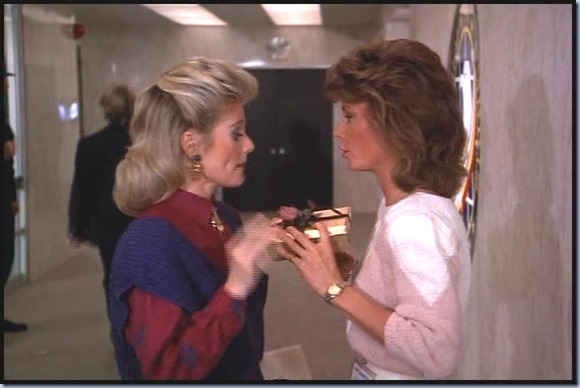 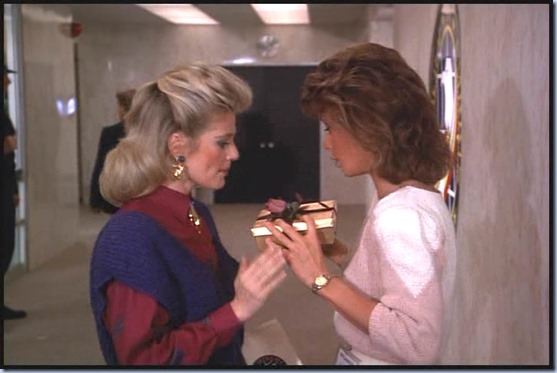 Francine (same time): Most of it didn’t…
Amanda (same time fast!): … so I couldn’t give them to you…
(Amanda puts the ecstasy assortment back behind her back.. because.. well.. it didn’t happen! rofl!!) 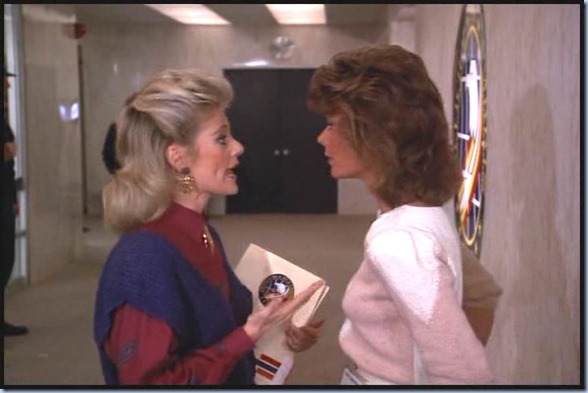 Francine (same time): … but some of it happened… a little bit happened… [whooooo hoooo! Amanda’s got her good!!!!]

We can just make out Billy appearing in the distance..
Amanda (continues): You mean you want these chocolates?

[It’s Billy and Lee!! Do you think they saw? I think they totally saw!!]

Billy: Well, we have some good news.
Amanda: Yes, Sir?
(Billy stops in front of Amanda, with Lee just behind him.)
Billy: Once Carla started talking, we were able to recover every ounce of that poison.

Amanda: Ohh. Good, Sir.
Francine (same time): Ohh!
Smiles all around! Is it just me or is this a rather unsatisfactory tying up of the rather unsatisfactory bad guy plot? we didn’t even get to see Carla get nabbed!!! At least we saw Nasty Rita find out she’s no lady!!
Oh well..Can’t complain too much I guess.. Francine has acknowledged Francine and Amanda in the freezer actually happened – a little bit!
Lee: Yeah. Yeah… and I just got a call from the hospital. Eddie’s out of his coma. 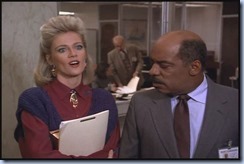 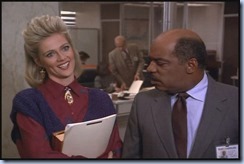 [whahahahaa.. I think Billy knows it’s Amanda.. he doesn’t miss much.. he’s just having fun messing with Francine here me thinks.. how about you? how are you seeing this? ]

I think he knows it was Amanda.. and he’s giving nothing away.. (to Francine I mean) 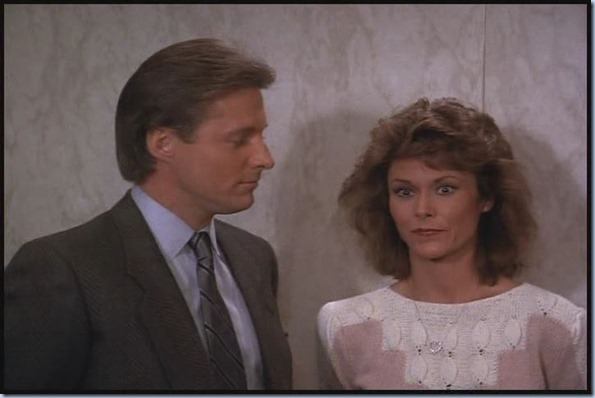 [She could tell you.. but then she’d have to kill you]

..Excuse me.
(Francine rushes off…) 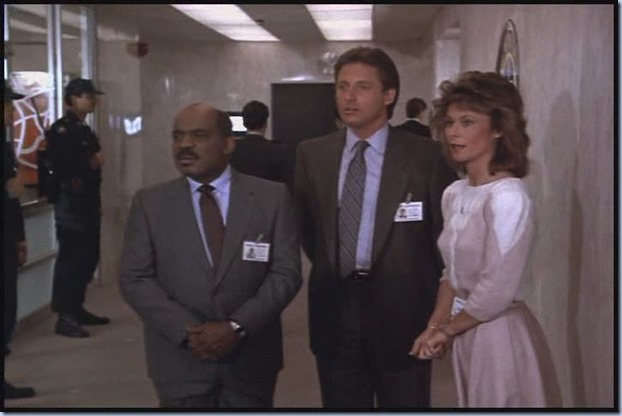 Amanda: I think it’s really nice that someone likes Francine. 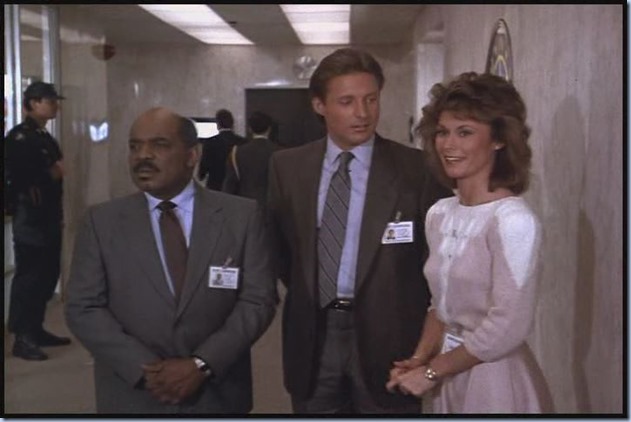 Amanda chuckles.. yeahhhh someone probably should like her! she’s sooo darn… likeable!!!

Billy laughs very loudly – a real rip snorter! hilarious!! If I ever made videos.. I’d include that laugh!!

I think Amanda knew what she was doing the whole time in this tag.. I don’t think Amanda thought for a second that Francine and she were suddenly best buddies. No way! Amanda had probably guessed Francine would try and back up from what happened.. (Lee’s old trick!) Try to back up? you get no chocolates!! go on ! admit it! we were talking like friends!! tee hee.. Amanda got Francine good!!! Gotcha!!

This part of the tag also reminded me of another Francine gotcha – and it’s the tag in The Life of the Party!

Lee gives Francine a gift that time.. again – in a Gold box!
Can this be coincidence?!
Only Lee’s gift was definitely not the ecstasy assortment..rofl maybe it was for Lee and Amanda! but not for Francine

more the complete opposite

I don’t want to rush this final part of the episode – sorry! going to cut the tag in two.. and will be back with the final instalment soon!!! do let us all know what you thought! bye for now..