So Lee sees Donna approaching and quickly has to hang up on Amanda – who’s just copped a nasty earful from Francine..

Donna: Excuse me, I just got word that Mr Tomerson has made contact with his lawyer who has flown in to speak with you.

Francine: He’s here.
Donna: Mr Jeffries wants to speak with the two of you out by the Grounds-keepers barn.
Lee: Now what sense does that make? That’s half-way back to the main highway.

[They must be very extensive grounds!
Do you think they are wondering if it’s a trap?]
Donna: Well, he says it’s for security but you’d know more about that than I would…

[oh nice! play dumb hey Donna.. Donna who flashed her gun.. Donna the ‘former military flyer, weapons expert and black belt’?? This Donna doesn’t know about security? Are Lee and Francine buying this?!]
…Tomerson wants a complete report on the threat to his daughter but he doesn’t want Tina to see you with his lawyer… 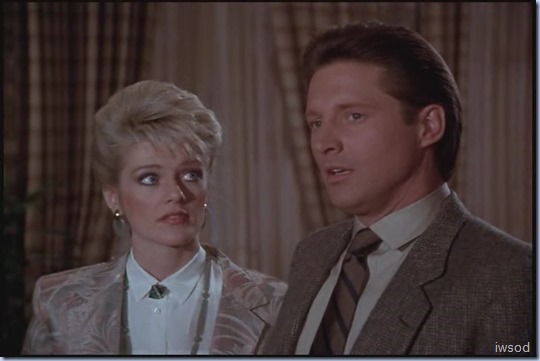 Francine and Lee leave Donna to go meet with the lawyer.. and Donna gives them an evil look as they walk off. Muahahahaaha!

Donna is turning out to be quite the big bad evil errr baddie!
What was it Tina said about the agency sending a female agent? -Francine was underestimated..
Seems she wasn’t the only female underestimated – Donna too!! [interesting..it worked very well for both these women that they be underestimated]
Amanda knows a thing or two about that! I wonder what she would have made of Donna…
Next thing, we see the barn, and dynamite on a table.. 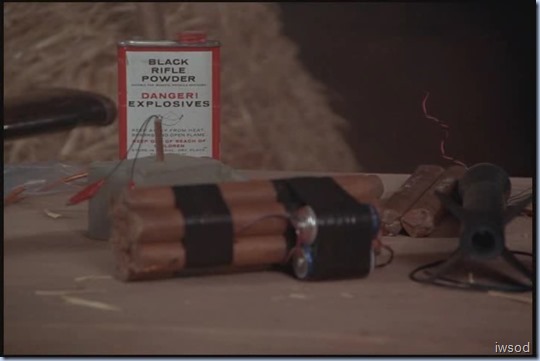 Lee and Francine pull up at the barn.

As Lee calls out we see Scorpion Dude moving into position in the barn with his rifle.

Lee: I don’t like coming all the way out here. It just doesn’t feel right…I don’t like the look of this. Come on.
Anyone home? Hello, Mr Jeffries? Anyone here? 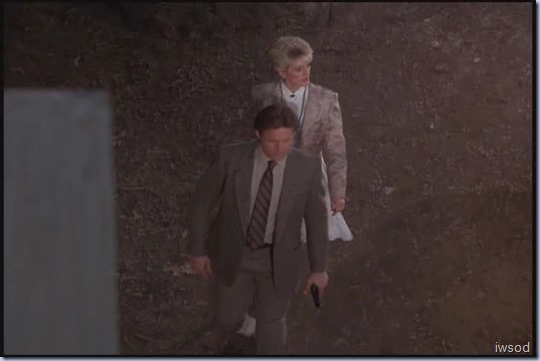 Lee and Francine are exposed- Scorpion Dude lines up his shot. 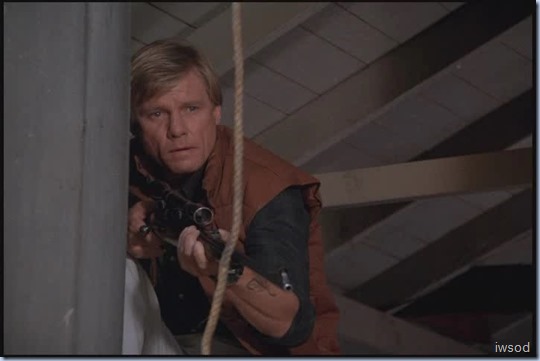 And is interrupted by Tina and Tony arriving.. Gee I thought Donna was keeping an eye on her.. ahem.. Scorpion dude told Donna to bring the agents to the barn.. but I don’t remember anything about Tina and Tony..
Lee: What the hell are you two doing here.

Tina: We got a call from Donna. She said to come out here and meet you, and—
[Seems Donna is following her own play book] (Donna flashes some light at scorpion dude and he shoots)

– lol right when he can’t aim at anything, that’s when he shoots?! tee hee.. Dumb baddie!
Hey everyone! I’m here with a gun! rofl!
Tina and Tony scramble out of the car, and Lee and Francine take cover too.

Lee: Get down everybody! Get down!  Look Francine, get ‘em outta here. And stay down!

Francine leads Tina and Tony back to the corvette to take cover… while Lee stays by the red convertible..
The mirror in scorpion dude’s face continues.. so does the lousy shooting.. Then, Lee manages to shoot back,

one way or another scorpion dude ends up backing up and falling onto the table with the dynamite.. whatev..

We see a huge explosion.. Scorpion Dude is no more!
And when I say huge explosion.. I mean HUGE Explosion!!!! Why??? Well.. as Lee dives from the bomb blast…
Lee morphs back into Polyester Lee!!!!!! 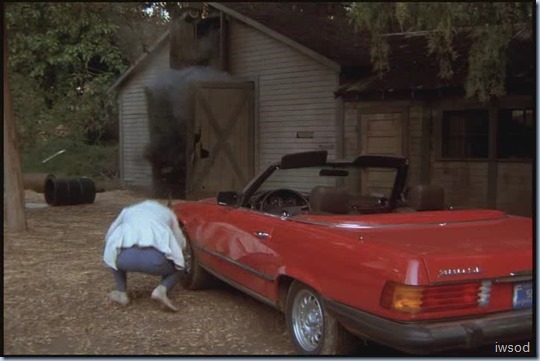 That’s quite a blast!!

For a moment there it blew Lee back in time!

[I guess someone forgot to tell second unit Lee had changed clothes by now.. maybe this is due to script changes.. but anyway.. hilarious!]

Whooo seems Francine, Tony and Tina have maintained their current wardrobe and have been shielded from the full blast

Boooo.. it’s just not the same when it’s not Amanda running toward Lee to check if he’s okay!!!

We get Lee and Francine sort of sharing confused looks at this turn of events..

Hmm it’s almost like us, the audience, experience the same thing Lee is experiencing throughout this episode – we notice how very different things are without Amanda.. It’s just not the same.

Moving on back to the tennis ranch and we see some tennis archival footage –  that’s Martina Navratilova!! I’d know her anywhere! in the foreground

not sure who she’s playing..

Anyway, back to the hotel room – Billy and Lee are talking, and lots of agents are moving around..

Hey, Lee’s changed outfit yet again.. Like the jacket.. but gotta say.. those pants? Meh.. maybe it’s looking really dated.. but to me it makes Lee look ummm.. more mature and fuddy duddy..
Is it just me?!
I’ll focus on the jacket! At least I don’t need sunglasses to look at this one.

Francine gets off the phone..
Francine: Well, we can all rest easy. I just got confirmation that Donna is on the flight from Dulles to Honolulu. She’ll be taken into custody the minute they arrive.

Billy: The $100,000 that was credited to Donna’s account has been traced back to the communists who threatened Tomerson.

Francine: Well Lee, this is no time to look like someone just stole your bicycle… [wha?!] 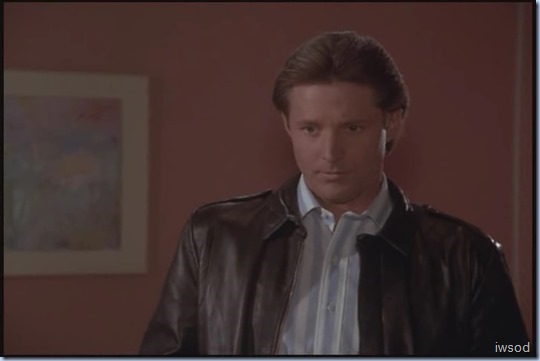 ….Steckler is dead, Donna’s going to be picked up in a couple of hours, and Tina’s back in the tournament.

[lol at the brooch Francine is wearing.. she does think she is destined to become royalty.. and the earrings? two disguised sticks of C4 explosives!

[Yeah!! and this time.. it might actually mean something that it’s too convenient!] …Look I spent half the night talking to anyone anywhere who had ever dealt with Steckler – met him, investigated one of his hits—
[I guess this is day two huh.. the timing is a bit confusing]
Billy: Any help?

Lee: But one thing is certain – Steckler was a consummate pro. He always did his job and always got big headlines. Headlines seemed to be very important to him.
Francine: You’re right…
[wow.. now such a direct admission Lee is right? would that be something Amanda would say? I don’t think of Francine telling Lee directly he’s right- there’s too much competition between them.. she might think he’s right but she would say it.. would she?]
…I remember in Geneva he assassinated an ambassador that was being honoured at a public concert. 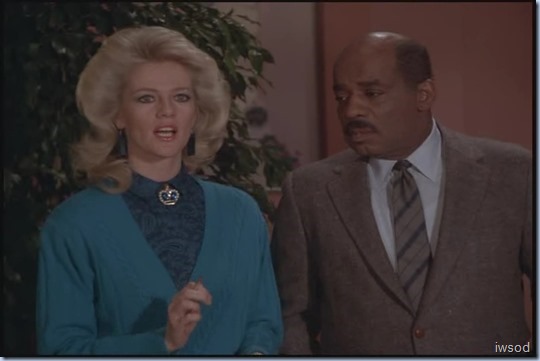 [Dang.. the ambassadors are having a hard time of it this episode!

Reminds me of Von Snob trying to kill the American Ambassador in Munich! Funny it doesn’t remind Lee.. he was there- Lint?! err.. oh yeah.. Lee is not real. He is a character.. Lee was not really there – whoooo Lindt!]
Billy: Well, when he was in Hong Kong he used a bomb on a British Emissary in the middle of a press conference. So what’s the point? He’s dead.

Lee: Another thing, the Police recovered his rifle at the barn. Now a pro like Steckler would either use the rifle or the bomb, but not both. 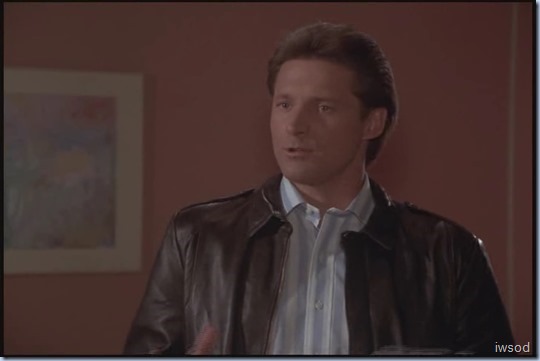 [ummm.. to me that’s a stretch!!! there were little missiles on that table earlier when Steckler was working there.. I don’t buy this logic. but.. I’m sure Lee’ s right and it’s not over.. the ep has another 10 minutes.. that’s 9 minutes of action finale and a one minute tag lol.. ]
Billy: So if Steckler was set up, this thing’s not over.
Francine: All-right, we still have 20 guards on the tennis courts and have spotters on all the perimeters. 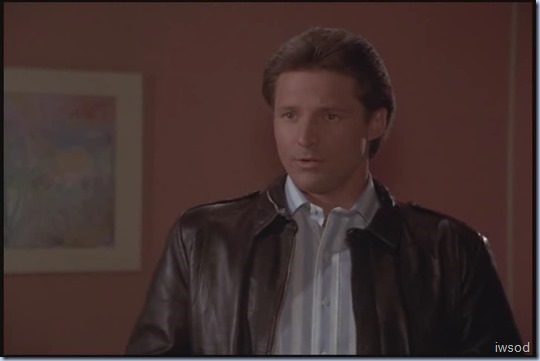 (Lee makes for the door)
…C’mon, we’d better get back.

Lee and Francine leave..
I shall stop here for the moment too..
I miss Amanda.. seeing Lee call for Francine and go to open the door for her.. is just so sad!