I enjoyed PFK, but I’m thrilled to move on to an episode where Lee and Amanda are working together again!
I’m guessing I’m not alone in that

Huge thanks to Happy Camper who has transcribed the dialogue of this episode to help JWWM keep on keeping on – Happy Camper- We salute You!!

Also- thanks Learjet for formatting this dialogue for me and helping to reduce my computer time. My eyes thank you too!!

Okay.. ready to get on with the show?? Here goes!

Why OOOOOhhhh why is Pharaoh spelled incorrectly???  Is this intentional or a boo boo??
And is the person who named American Pharoah an SMK fan? Enquiring minds want to know 😉

Well anyway.. the episode opens with this hi-tech music and a bunch of serious looking men in black looking like they mean business.
Except for the dude on the end with the Medieval hair don’t

Wow.. right away this non smk music is screaming that this episode is going to be something different!!
Anyway, we see someone drill a big hole in a wall, While the moustache army watches on..

And whose name did I see as Director?

Whoooo Hooo!!! go KJ!!! Ahhh Learjet, now I see why you love the direction of this episode! 🙂

One of them puts explosives in the hole and then blow a massive hole for all these people we don’t know to go through.. Well.. the music tells us their being sneaky! Very sneaky.
Suddenly.. the music stops, and we see a hand turn on a spotlight. Seems someone is up high supervising them. He calls out: You will only get 15 seconds, gentlemen. The air conditioning automatically seals…

…You’ve got to get the gas into the ducts. Miss by one second and we all end up dead! I’m paying you to kill them, not get killed yourself – let’s do it again….

[Yeah way to go with the motivation there head baddie! I’m not paying you to die!! so therefore you shouldn’t want to die! Heck, If I wasn’t paying you – you would want to die!!! whahahaaha]

…Now remember, gentlemen, our objective is Level F, the main A/C plant. Regardless of where we break in, you will have ONLY 15 seconds. Questions? Let’s do it!
We see a massive door being slid open and a van is driven into this big warehouse as a voice in the background booms: Alright, you heard Mr. Durran. Let’s reload…. gas, everything. System one, 15 minutes. Alright, let’s move! Yeah. Break it down.
We see this Mr DuranDuran (who’s hungry like the wolf!) come down to ground level and approach a high tech alter of some kind

Or.. is that a Pyramid? whooooo…

Durran orders a baddie around: Alright, get ‘em reloaded.
And puts the map he was looking at into a cylinder and into the back of that van..
Then we get a super fast close up on DuranDuran’s face.. whoooo he’s nasty! [Bet he’s a ‘wild boy’ – how many Duran Duran references can we give this dude? 🙂 ]

So okay everyone.. who do you think of.. Laura Palmer’s father?? or the Lawyer from The Closer?? or another role? Ray Wise has had a long and varied career huh.. Kudos to him! But I’m sure that SMK was the pinnacle.. and it was all downhill from there 😉 whahahaa.. well.. moving on!
On to IFF.. The scene opens with a close up on a wrecked van.. 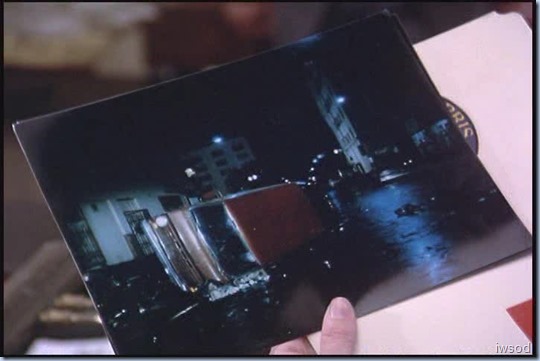 [Is this the van we just saw?]
Billy: The driver tried to outrun the DC police after being stopped for a minor traffic violation. [Me thinks this baddie driver sounds dumb!] He was DOA at the George Washington University hospital.
Francine hands the photo to Lee..

Ohhh My Gosh!!!! what is she wearing??!!!! The Pharaoh’s are rolling over in their raided Pyramids! gah!!!
Quick Kiwismh! Make an arrest!!! Hey we got any other fashion deputies patrolling? [it’s exhausting work – so we need help!]

Francine: Chemical warfare agents — G-S gas, to be exact.
Lee: Whew, nasty stuff. [G-S Gas? oh dear… Billy can’t spell.. it’s GAS Gas whahahahahh this has got to be a little in joke no?]
Francine: Yeah, also plastiques and blueprints, and that’s a pretty interesting cargo.
Lee: You know, it sounds like someone’s getting ready for a break-in.

Francine: So what do you do with a vanload of G-S gas?
Lee: Almost anything you want. Question is, where? 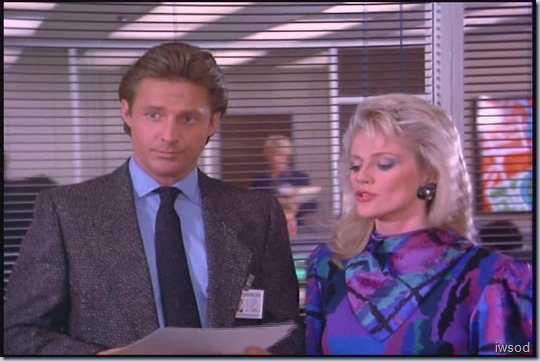 Billy: I think the lab people are gonna be able to help us on that. Here’s a piece of blueprint that was in the back of the van.
[Ohhh cool. okay it was that van.. phew..seems the baddies have accidentally showed their hand. and rofl yeah a map might help identify a location!] 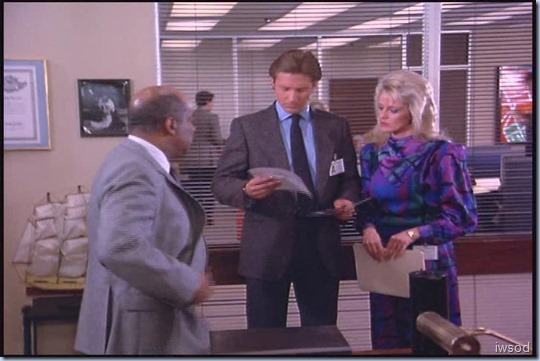 [Does this look like a blueprint? looks like a receipt of some kind to me. Not a blue print like Billy said it was?]
Billy: Security system made exclusively for our government offices.
Francine: Look, I’ll run a check on it and find out who’s got one. 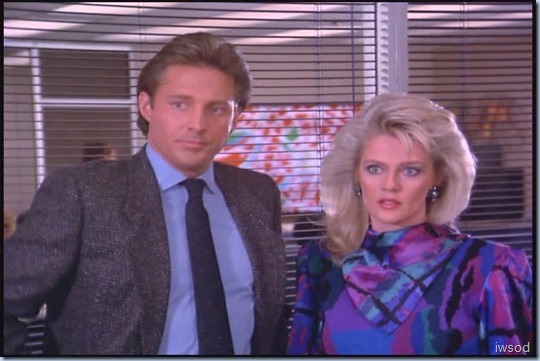 Billy: Lee, see what you can dig up on the street. Be careful, be quick. Blueprints, chemical weapons, mercenaries — whatever it all means, we’ve got to stop it.
I’ll apologise now – this episode seems to be giving me loads of trouble getting non blurry images. I’ve ripped the dvd twice to try and improve it but no luck – I’ll just have to go with what we’ve got. Reach for the sky gave me similar problems.. booo.. oh well at least we can’t see Francine’s out fit too clearly

Anyone like the outfit? Okay.. I like the colours on her, but that’s about as far as I want to go! How embarrassing that Francine forgot to remove her bib after breakfast that day

and so matchy matchy