On to Birchwood where Amanda is ‘picking the residents brains’. Sounds like they’ve had a lot of that lately

We see a lady in yellow patrolling the perimeter. Oh wait.. Is this Ms Walker?!

We saw her earlier this episode..

Is Birchwood on her route? or has she since retired?!

Oh hey, the scene before this shot was that Sphinx riddle..  remember?

What walks on four legs when it’s young, two when it’s grown and 3 when it’s old?
I think the transition to this shot of Ms Walker with her Walking Walker stick could be a clue- lol I haven’t looked it up and this may be really obvious lol.. and.. probably by the time you read this you will have already sorted this one out in the comments to the previous post. lol.. but I’m only now maybe solving that riddle.. this lady has 3 ‘legs’ and is old! Me thinks the answer is People. Am I right? Maybe I’m not because I don’t get how this is a riddle about the sphinx. My head hurts. moving on!

Amanda:  OK, Miss Mendelssohn, I have that.
Glynnis:  Protein, energy food, that’s the main thing.  No junk.  You can’t expect your people to give you their best on potato chips.  [hallelujah!]

Amanda:  Miss Mendelssohn, do you know where they used your menus?

[Hey I just realised.. Amanda is wearing the same clothes from the day before.. and.. Lee in the last scene was too.. sooo they were up all night long and never changed? I would have thought they’d have changed before waking Rupert. I must say – Amanda looks terribly well put together for having been on stake out all night. And Lee? well.. he always looks terribly well put together no?

]
Glynnis:  We don’t need to know.  That’s the Agency way.
Amanda:  That’s right!  Well, thank you very much for your help.  I hope maybe someday I can come back and tell you what this is all about, but in the meantime — 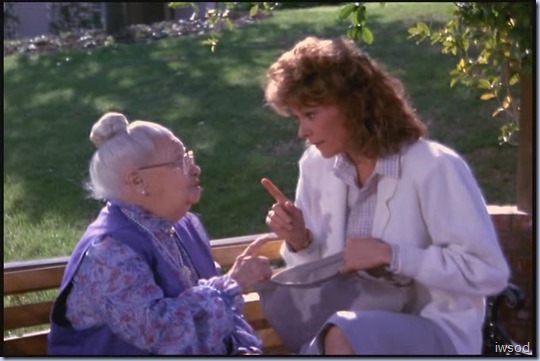 Glynnis:  Mum’s the word.  Don’t worry dear, we know all about it.

A baddie nods at Durran, who nods back. Seems things are going according to plan – so far!

You know, these baddies have a nerve! don’t they know they’ll be cursed if they break into a pyramid and find the Pharoah’s tomb?! And what I want to know is – which Pharaoh built this Pyramid anyway? Was it King Harry V Thornton?

Back to Billy’s office.. Billy has a clock on his wall..

Can anyone make out what is the picture under the clock?
Billy turns and says: Keep trying, Amanda.
We see Rupert seated with Amanda..
(Lee is perched on the side of Billy’s desk watching on.)
Amanda:  Yes, sir.  Um, Rupert — Rupert, Mr. Eisenstein supervised the formulation of a high-fiber content weave for a new carpet.  And they produced 11 square acres of it in South Carolina.

Lee:  Yeah, the carpeting, Rupert.  Tell us what you were going to use the carpet for.
Rupert:  The question was, whether to use carpet at all.  I had to fight that one, I can tell you.
Billy:  I’m sure you did. And you had good reason.
Rupert: I couldn’t make them see that.

Amanda: Who, Rupert?
Rupert: The bigwigs! The stuffed shirts! The pencil-sharpeners. The guys in the suits. Ah . . .

…What was the question? 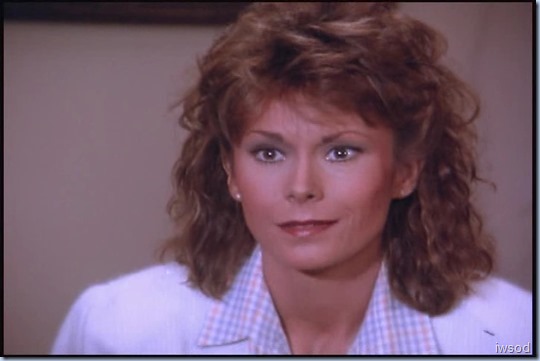 Billy: What else, Amanda? Something else you found out might grab him.
Amanda: Uh, Rupert — Mr. Olney designed a ventilation system,..
(We see Rupert snoring- understandable. He didn’t get much sleep the night before!) 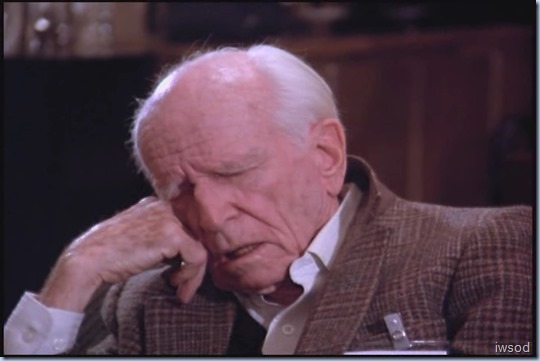 …and he based it on an aircraft carrier with the inflow and the outflow and the residu– Rupert!
Billy: Rupert!
Amanda: Rupert, please!

(LOL both Billy and Amanda start shaking him. Lee watches on from a distance) [I keep wishing someone would bring Rupert a nice cup of hot tea!]
Billy: Rupert, the air conditioning. This is the design for the Pyramid. Do you recognize it?
Rupert: Air conditioning? What do I know about air conditioning? That was Olney’s baby — ask him.
Billy: More, Amanda — come on, come on.
Amanda: Yes, sir…  (Super upbeat now!) …Rupert –Did you know that Washington sits on an alluvial plain above a granite base… 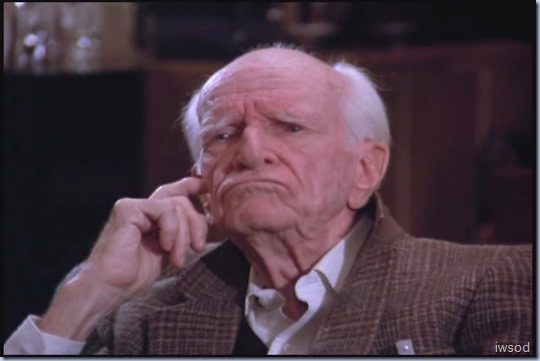 …We had to blast the dickens out of that stuff. But boy, do you get a nice hole in the ground. Solid!
(Billy seems to be thinking there’s no use..) 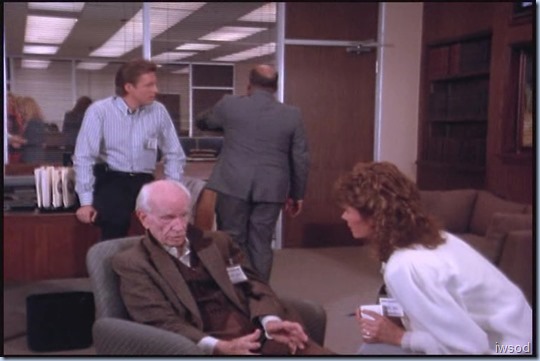 Lee: The White House War Room, the new facility was built in the 60’s.

Right on cue in comes Francine and some annoying dude who interrupts: Sixty-eight!

[LOL what a dude.. Francine hasn’t even introduced him yet]
All: Shhhh!

[LOL!] Francine is a bit shocked at their combined reflexive Shhhh!!! But hey.. you didn’t even tell them you were there!

Seaforth dude: We put a “G” model in there.
[They seem to realise who this guy is.. and suddenly Billy is addressing him rather than shushing him. Weird edit here.]
Billy: You ID’d the blueprint?

Lewis: We were up all night with the microfilms.

Francine: This is Doug Lewis with Seaforth Alarms — he just got in on a flight from Tulsa.
Lewis: Studied all the Seaforth 900’s in the country. Sixty-three to the present. Model A to the latest — the T. It’s not there. No match. 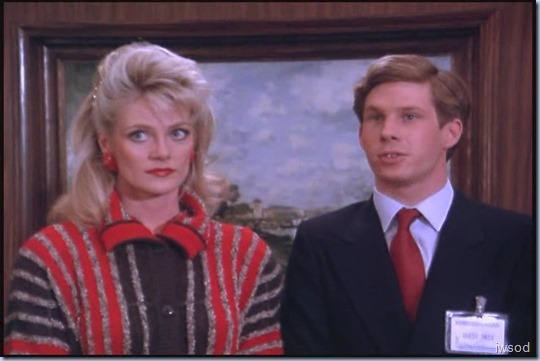 Rupert: Best damn alarm money could buy. More transistors than Carter has pills. Ha! A beauty.
Amanda: Oh, I’m sure it is, Rupert! Why don’t you tell us about it?

Rupert: Eleven levels of sensors. Closed-loop system. Indestructible. Cost six million to develop. But I said, it’s worth it. You don’t go to all this trouble to hide things, and not be secure.
Amanda: Oh, you sure don’t! But why did it cost so much money, Rupert?
Rupert: It was the prototype! The first one! Serial number, ought, ought, ought!

[I think Rupert does a good job here of divulging but still being under the influence!]
Lewis: My —, the prototype. I never thought of the prototype. Who would? I only looked for the production series!

[Okay, is it just me or.. when you get over how swoony Lee looks here.. does this shot look really ridiculous??!!!! Captain America and his super short but plucky side kick? kinda ridiculous? ]
Lewis: You’re standing on it.

Whoa… everyone takes a second to compute this..

Amanda (to Rupert): Pyramid is the Agency? 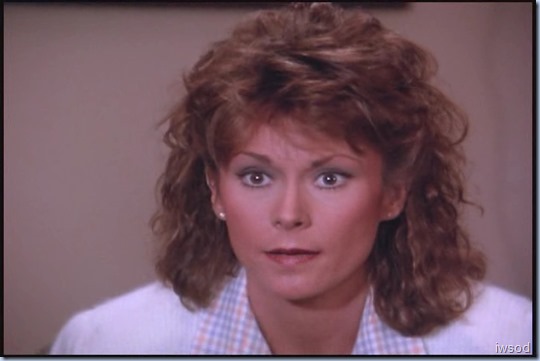 He looks exhausted.. if he weren’t on drugs about now he’d be thinking – now I understand why they use to bury the Pharaoh’s engineer with him when the Pyramid was sealed!! [or lol is that just a myth?]

Amanda nods back.. and KJ does one of those expressions she’s so good at.. you know.. oh boy what are we into.. what’s going to happen.. and they cut to commercial or another scene.. I think KJ is expert at these!

I’ll pause here.. and look forward to hearing your thoughts everyone! I think I’ll be able to finish this ep in the next post… that or I’m going to start behaving like Rupert on these drugs..