So where were we?
Francine had just interrupted Lee and Amanda’s cosy hideout (or game of hearts)  to replace Lee in keeping watch on Amanda, because Billy wants Lee back at IFF.
Reluctant Lee walks out to his Corvette, gets in and drives away.
Lee: You’re coming in loud and clear. I thought the phone lines were messed up?

Billy (in his office): There’s nothing wrong with our phones.

Lee: That’s funny. Francine said she could barely understand you. 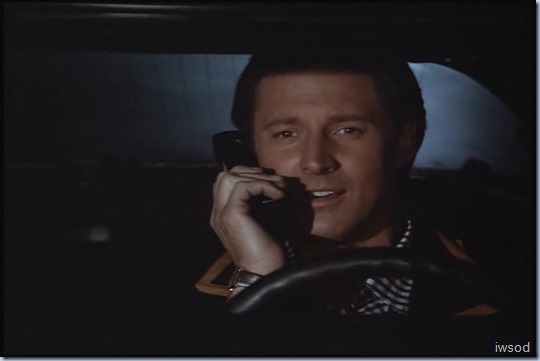 [I love how Lee is holding the phone to his ear while driving.. in this day and age – Lee would be breaking the law!! well.. at least in my neck of the woods – very naughty! Both hands on the wheel Lee!! but then.. well … it is urgent and about keeping Amanda safe.. soooo.. go ahead!

]
Billy: What? What’s going on, Lee? Why aren’t you with Amanda?
Lee: She’s with Francine. Look, what’s up?
[Eh? Is it just me or is Lee a bit slow on the uptake here? What’s up? Billy just asked you why you aren’t with Amanda- helloooo?!! Hmm.. I’m going to blame the editors for trying to make Lee look a bit dim – their jealous

]
Billy: Well, you tell me–I haven’t spoken to Francine all afternoon.
Lee: Well, someone who sounded just like you did… someone who knew our… our recognition codes… [Bing! the penny drops! Gee.. just like that dude who stopped by Amanda’s to pick up the cheque!]

…Billy, I’m gonna go back there. 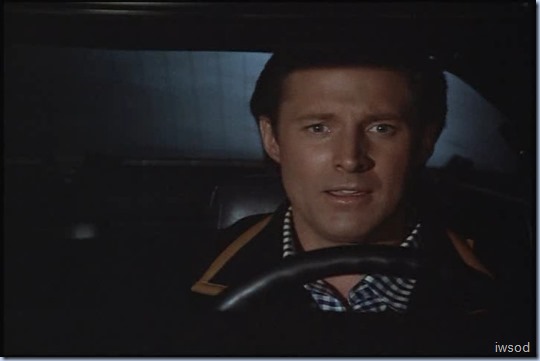 Lee puts the Corvette into a snazzy screechy super heroic  U-turn and starts driving back to the hotel,..[Oh my.. swoony very worried mode!]

…then Lee picks up his car phone again.

…Jepard, wearing black clothing, is outside the hotel behind a hedge…. 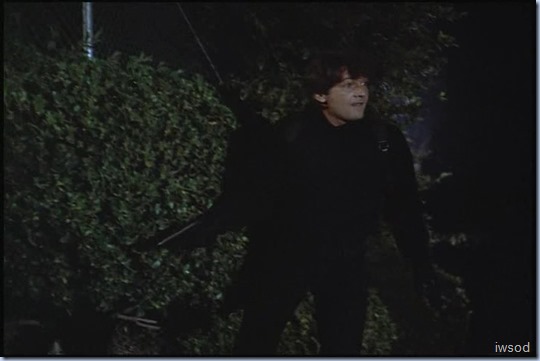 Uh oh.. this can’t be good!
He carries a gun and is wearing a crossbow … 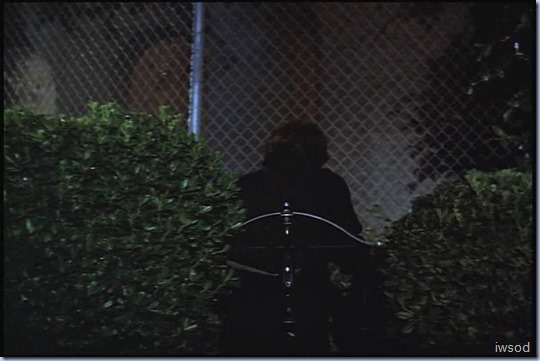 He starts scaling a mesh fence.
I get why Jepard would know Amanda is being hidden in this building.. but how would he know what floor Amanda is on? oh wait… the only floor with the lights on maybe? lol!

Cut to Francine and Amanda inside the suite in the hotel room. Francine ‘s on the phone..

Lee (off screen): Francine, I just talked to Billy. He never called you.
Francine: They’re trying to shake us off Amanda.
[yeaahhhhh don’t be offended Francine.. because the implication here is that Lee would have been better at protecting Amanda than Francine haaaa– so they tried to get him out of the way!  It seems rather dumb to me- and risks the surprise element giving them a clue something is about to happen.. but.. I’ll hold this thought for now]

Lee: All right, all right. Now you just sit tight. I’m on my way.

Francine: Nothing good. I’m gonna call security—have ‘em send up a guard.
She picks up the phone and starts dialling.

Jepard is climbing up the side of the building, using a rope. Francine is waiting for security to pick up her call..

Jepard continues climbing. The Corvette screeches to a halt in front of the hotel. Lee sprints through the door and into the hotel. Jepard looks to have arrived on that balcony to Amanda’s room.. you know.. the only one in the hotel?!  Lee runs around the side of the hotel, pulls off his jacket and dropping it as he keeps running, then pulls out his gun.

In the suite..
Francine: Something’s wrong. Nobody’s answering.
[Why is no one answering? Doesn’t seem to me like Jepard would have had time to go inside the foyer and shoot security then get back outside to scale the building.. anyone? help?]

Yep, Jepard is on the balcony immediately outside the suite.
Yeahhh… that super convenient balcony for the baddie to get ready to attack from. Gee what a shame they hid Amanda in the one room with a balcony! whahahaahaaa 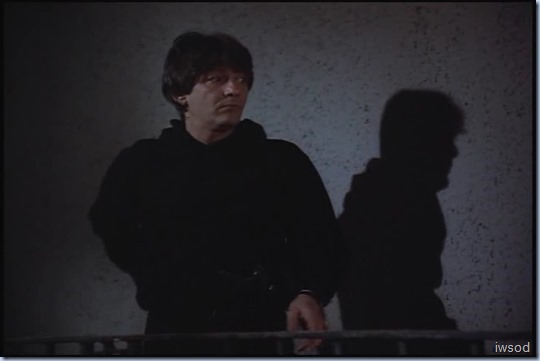 He lifts his gun and starts aiming it towards the door.

[Umm.. it looks like the door to the balcony is wide open?!]
Below, in the garden, Lee aims at Jepard and fires. 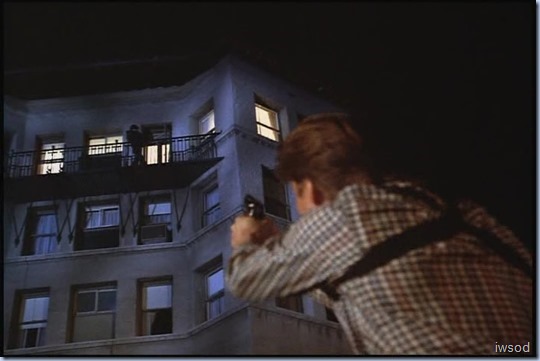 Jepard twists and rolls onto the bed in the suite.

[This must be one of those magic doors that opens both out and in!]
Francine slams the phone down and raises her gun.

Francine: Get down, Amanda…
(Francine takes cover behind the sofa and shoots.. but misses Jepard who’s also taken cover…)

…Amanda, get the backup car; get it started. I’ll be right there.
[Really? Let Amanda go alone?! Kinda makes me wonder if this was the back up plan, why didn’t two people guard Amanda.
Aie… it’s times like this I think Amanda should have been given some kind of weapon to defend herself! Then again, given all the improvised weapons Amanda has used in the past (Brilliantly identified by Jestress HERE) maybe they thought she wouldn’t need any! ]

Amanda leaves the room.
[Kudos to Amanda for how quickly she can unlock that chain and open the door while in the firing line!
LOL at how for that moment no one chooses to shoot – lol Francine doesn’t even give her any cover.. the baddie is so polite! thanks Baddie!]
Francine aims at Jepard and shoots again, she misses- again!
Amanda runs down the stairs.
[In heels! whooo danger danger!] 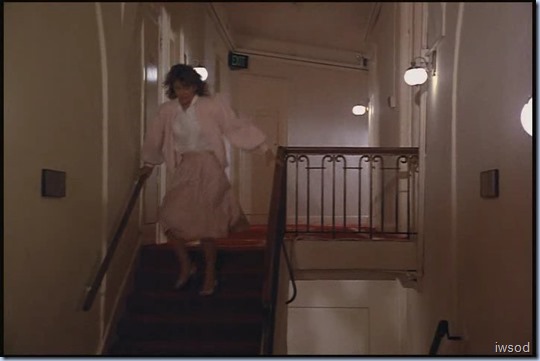 Francine runs towards the door and Jepard shoots at her,..
[Seems she can’t make it through the door as quickly as Amanda did

Uh oh – Francine is hit by a bullet as she reaches the doorway.
Amanda pushes the elevator “down” button several times, and then gets in. Francine struggles out of the room and collapses on her bottom, revealing a bleeding gunshot wound on her thigh,..

I’m going to need to pause it here for the moment guys.. we’ll pick up right where we paused!

Is it naughty of me to enjoy that Francine took a bullet for Amanda?! tee heee..

41 responses to “12/17 Season Three, Episode 16: The Triumvirate-Scarecrow and Mrs King”