It’s tag time.. and back to IFF, we find Billy leading Lee and Amanda out of his office. I guess this is the next day? Or why would Amanda be in a different outfit..
Billy: Same old story. Brody dug into Goldberg’s life, came up with some mistakes. Held him for ransom. And those lenses were the final payment.
[too true.. too true.. this really is the same old story

]
Billy: How did you make the connection between Goldberg and Diller Pharmaceuticals? 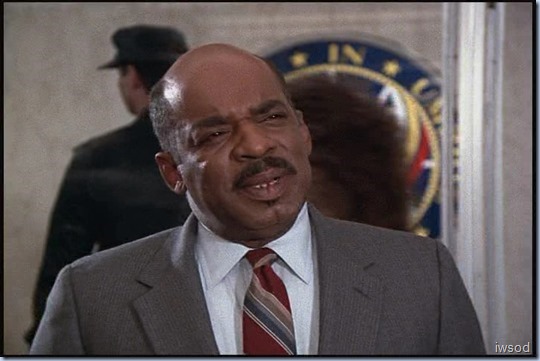 [someone call Dr Schardelli Stat! Billy seems to have Amnesia! Honestly – this has rushed re-write written all over it – pun! haaaaa.. I mean Billy saw Lee at his apartment go get Goldberg’s file and make the connection when Francine mentioned Diller Pharmaceuticals! Okay the audience didn’t know at the time which doctor’s file Lee was looking at.. but Billy would have. Aie. this is seriously lame. ]
Lee: Well there was this footnote in Goldberg’s dossier about some research work he’d done for Diller. It kind of stuck with me…

…You know how I am about reading the small print. 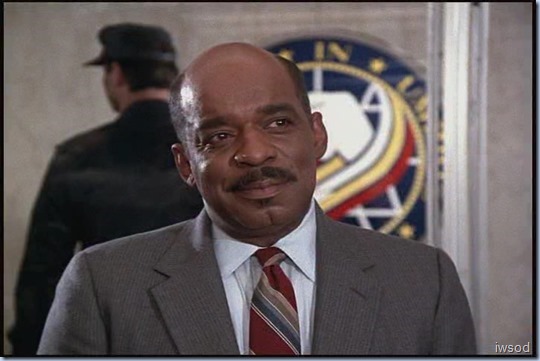 [Err no not really! Isn’t that Amanda’s strong suit?! I just love it when they change characters’ strengths to keep a plot moving.. And what  a lame line!  Ugh!!!]
Amanda: Oh speaking of small print…

[Billy looks at Amanda.. hmm – do you think he knows what’s coming? he does seem to have a quiet knowing look here!] 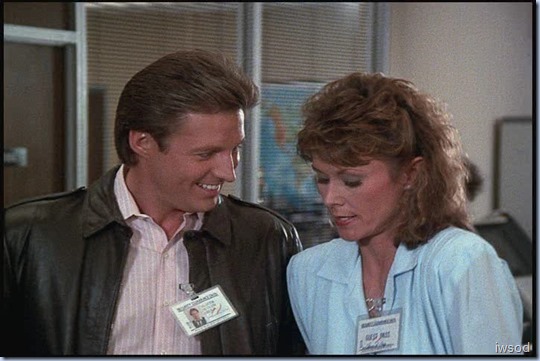 (Amanda unfolds a piece of paper)

…here’s some that I don’t think you’ve read it all yet……. [rofl! because he is soooooo good with it and all

…It’s your prescription from Dr Scardelli.

[Amanda looks up secretly at Billy.. Oh yeah! I’m thinking Billy and Amanda already had a discussion about this ‘prescription’ whahaahaha!! I think Amanda’s trying not to laugh!] 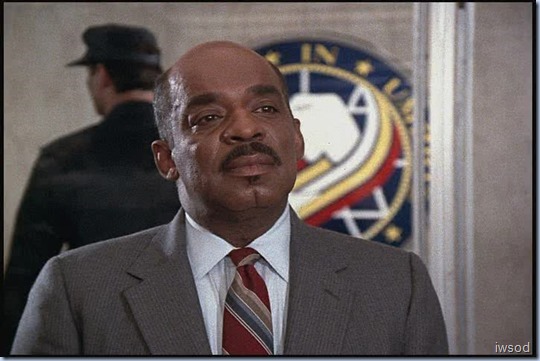 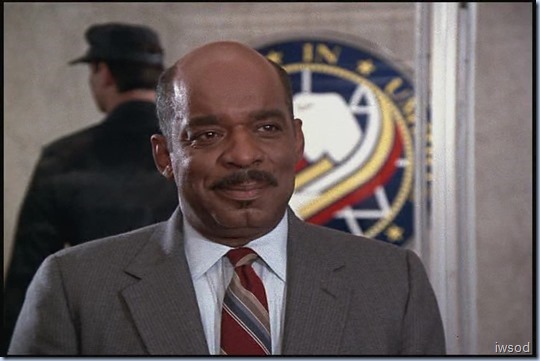 …and total relaxation for five days? [Dr Scardelli is the best matchmaker err doctor ever! I guess that whole accusing her of being corrupt thing was all a big act.. phew!]
Amanda: Five days.
Lee and Amanda say ‘Five Days’ in unison.

Lee laughs it off: Look- 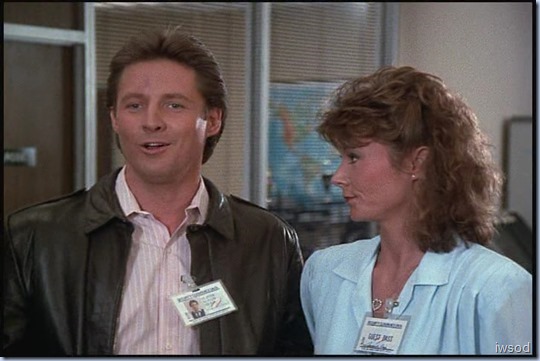 Amanda: –that’s right.
[The expressions on their faces in the image above crack me up!] 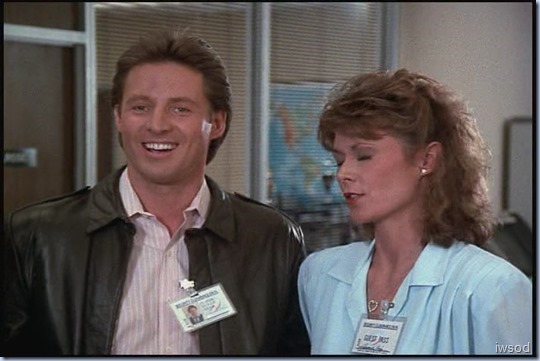 [lol Love how Amanda doesn’t even bother to argue.. Uh huh.. right.. sure.. that’s right! Mmmm!!!
Billy’s look he is giving Lee in this wide shot is hilarious! Lee you are so busted! ]
Lee: I’ve got a thousand things to do around here, I can’t-…. 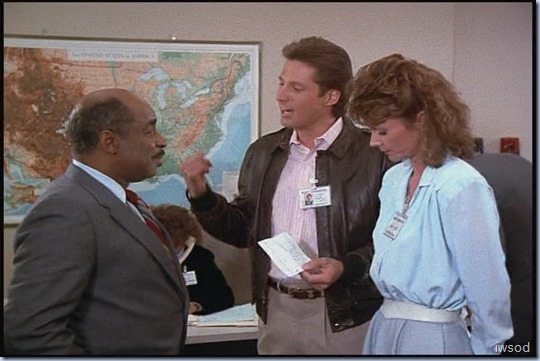 Billy: I second that prescription Scarecrow… 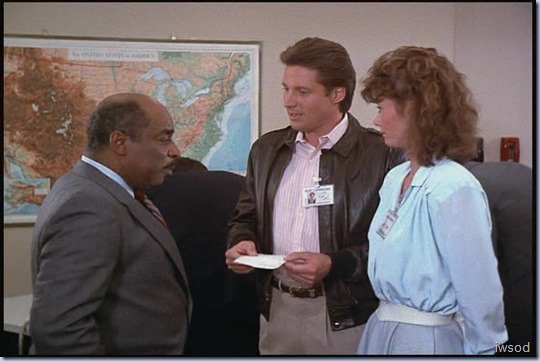 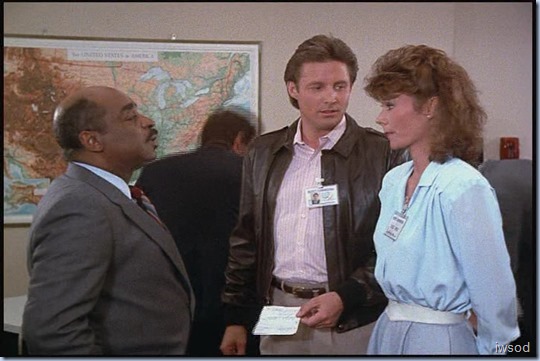 …I have an assignment for you. 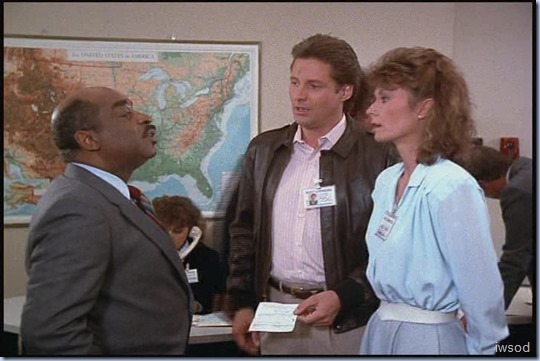 [We see Lee let out a big sigh.. resigned at his prescription. Interesting.. he may even be a little blah at Billy giving Amanda an assignment – which he thinks will be without him because he has to rest for five days! ]
Amanda: Yes sir. What is it?

Billy: Him. [hooo haa!]
[Well at that moment, an annoying extra walks by..

he’s NOT the worst though.. this guy is:

We can just make out Amanda’s surprise at getting this assignment.. and Lee suddenly looks up]

Amanda: Oh.
Billy: I am giving you a temporary AOS-16 status so that he will get that rest. 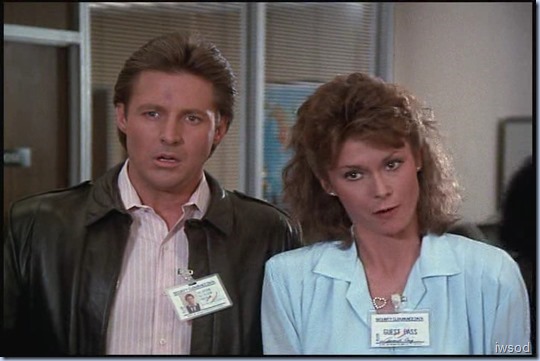 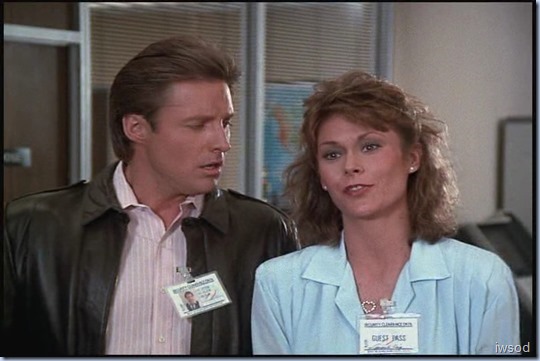 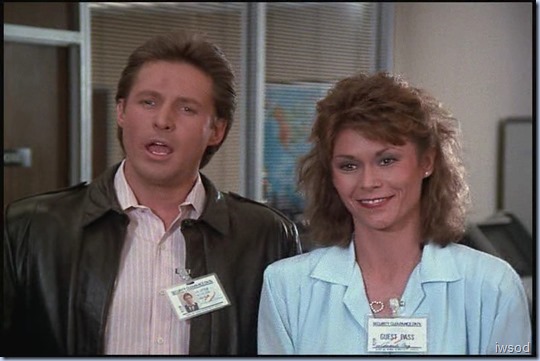 Amanda (under her breath): Higher than you…

[oh boy.. Billy looks to be having way too much fun here haaaa.. ]

Lol.. Love Billy in this moment! Hey.Billy,. you wanted to kill off Lee’s barnstorm network? cut it loose? all forgiven! haaaa.. 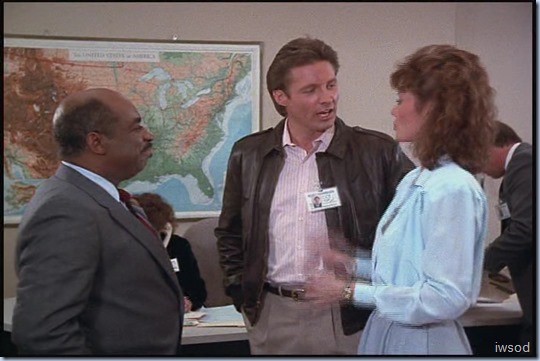 Instead, she points at him and starts to walk off issuing a command: Step right this way, please.

[you can juuuust make out Billy grinning widely as Amanda leaves and Billy walks off.. Lee trapped between these two.. whahahahaa!!] 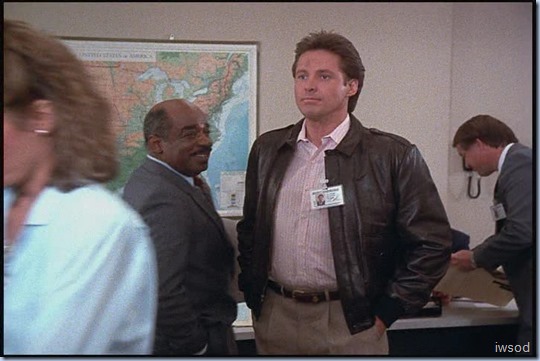 [Don’t worry Lee! It’s a sweet trap you are in.. and.. It’s flipping hilarious.. 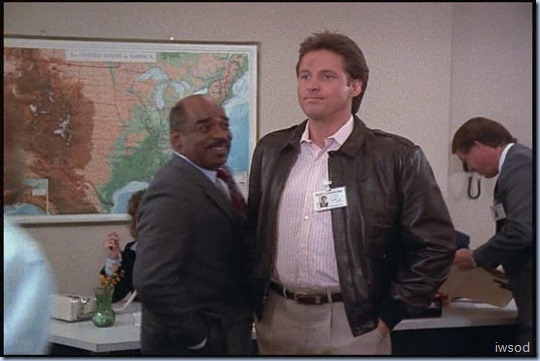 This is possibly my fave part of this episode – Billy here is a crack up!! ]
Finally, Lee follows Amanda and catches up with her as she heads out into the hallway..
Lee: Amanda, I am not sick.

Amanda: Uh huh. You are sick.

[Hey looks like Lee almost has his hand around Amanda’s waist.. I can just see it peeking out from the side there..
BTW- I love Amanda’s blue blouse.. the skirt with those drapey pleats looks a bit weird to me.. like it’s too big?]
Amanda: You are sick… 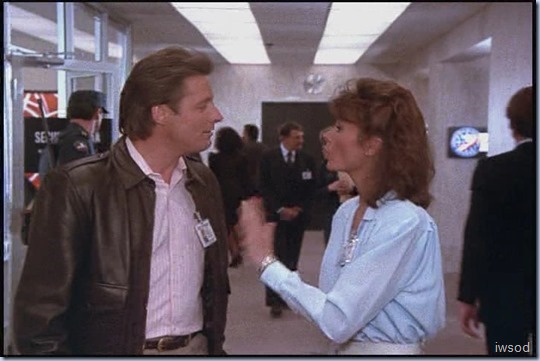 Soooo close. The hand is almost on his chest.. right where it wants to be 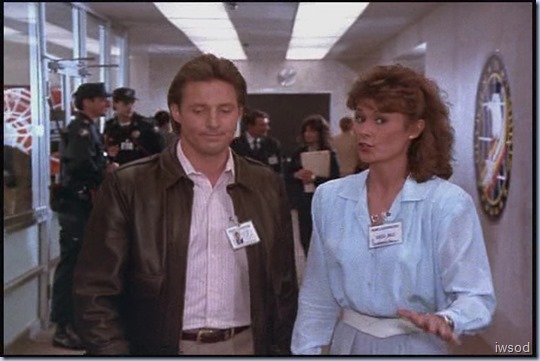 [Is it just me or does this seem a little too easy? It’s like Lee was protesting because he felt he had to.. he had to at least be seen to protest.. just a little..(maybe we are back to that mothering/caring thing again and his unfamiliarity with it)  but.. deep down- Lee’s fine with Amanda caring for him

sick or not sick. Now Amanda is higher ranking, is she Captain King again?

And.. Is Lee going to accuse her of mothering him again? orders or no orders?! ]
Amanda: Do you like chicken soup or vegetable soup?
Lee: Homemade or canned?
[Sorry it’s all rather blurry here as they are moving fast- literally – but not figuratively?

Lee: Something just occurred to me.
Amanda: What’s that?

Lee: Of all the people that I work with,..

…there’s only one who helps me the most… 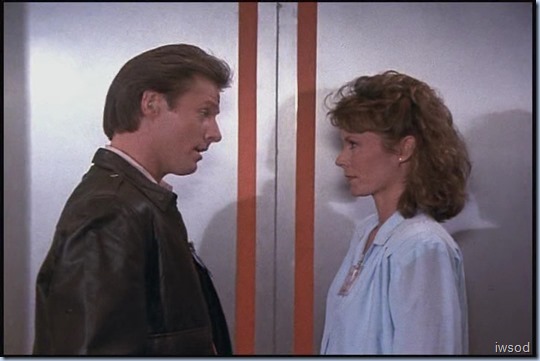 Amanda looks down for just a beat. 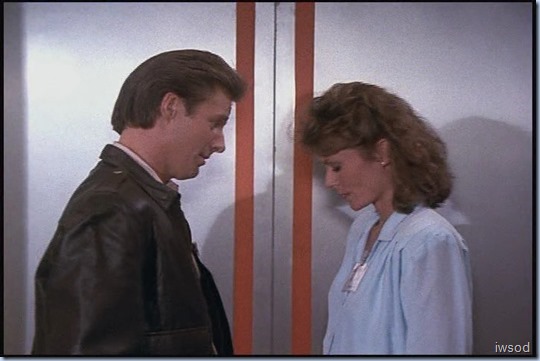 There’s plenty of heat going on in this moment.. hoo haaaa..

And suddenly – Lee lifts his hand and offers it to Amanda to shake hers saying: … Welcome aboard. 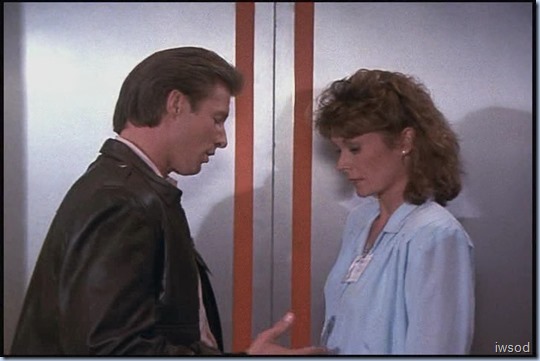 Amanda seems surprised at his offer of a handshake..
But she puts out her hand to accept it. 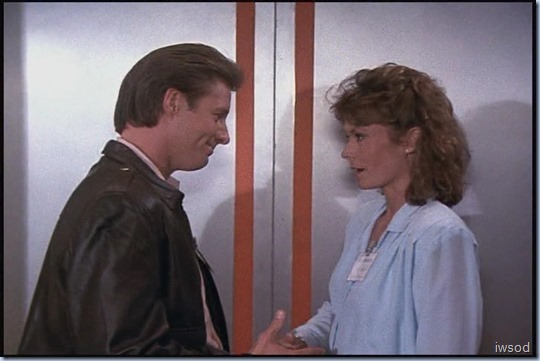 She thought this was anything but business.. and he puts his hand out for a handshake? sheesh.. She’s gracious though and goes along.
They shake hands.. and Amanda breaks the tension with a laugh.

Amanda responds: The pleasure’s mine.

Could their smiles get any bigger?!

They are too cute here! 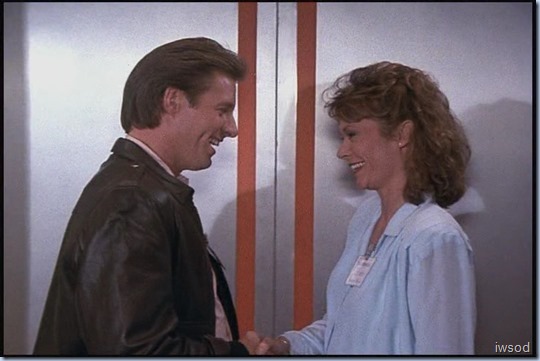 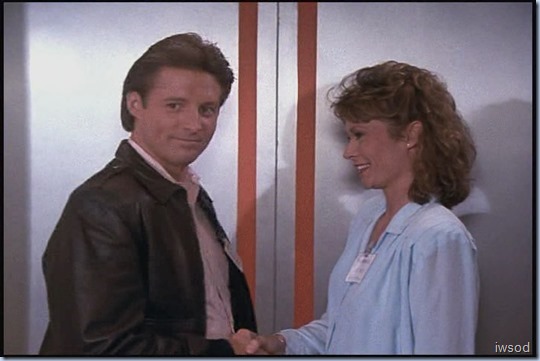 Then he turns back to Amanda.. and again – he takes her a little by surprise.. 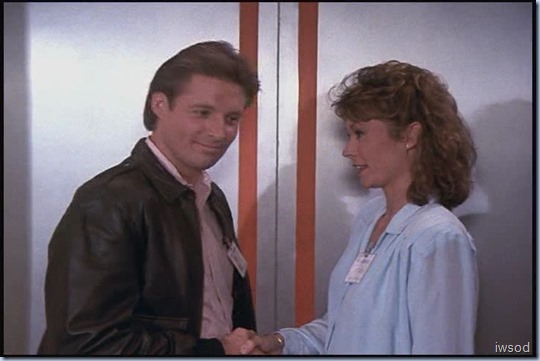 [Couldn’t you die?! that shot above is very steamy Lee Stetson me thinks!]

Lee (very quietly): No it’s not.
He raises her hand to his lips

Amanda’s transfixed.. she does like a good hand kiss.. lol.. do you think Lee secretly took note of this when they were undercover as a couple in weekend?

she was certainly affected by it.. but he gave no indication he noticed at the time.. 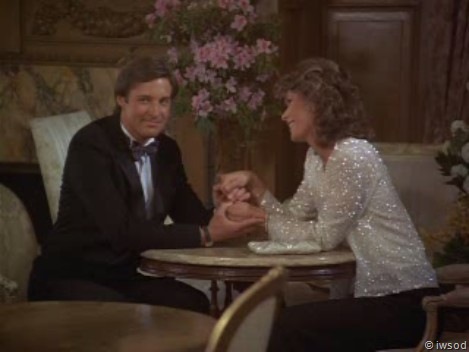 I’d like to think he did.. but shoved it away because he wasn’t able to think about it at the time.

The elevator doors open just as Lee kisses her hand. A lovely metaphor

I can’t wait to hear what you all make of this!!!

This is the final frame of this episode..sigh

More gentlemanly, respectful romance – full of real emotion and plenty of heat!! hooo haaaa!!! – which builds nicely on the kiss on the cheek in OBDOBD no? Another small step forward.

So what do you see going on here everyone?

To me, Lee here is saying – how very much he appreciates her and all she does for him. And.. he makes it clear to her that she’s special to him – it’s not business.. and IMHO she’s not really someone Lee sees as being on his list. I don’t really see Lee as saying Amanda’s now going on the barnstorm list. (heck after the episode’s events I wouldn’t want to be on it!) – It’s a way for Lee to say Amanda helps him the most – wow.. that’s a pretty huge admission no? He’s not put her on the list because she’s special! And that’s what the handshake was all about.. a rouse! I think Lee intended to kiss her hand from the moment he mentioned her not being on the list! Amanda’s instincts were right – this ain’t business! this is Love!

Yeah.. it certainly seems to me that Lee is pretty chuffed with Amanda’s new assignment!!

I can only imagine the fan fics out there about these 5 days! If you’ve read any you like please share them with us over at Ned’s on the fan fic thread (please keep fan fic discussions off JWWM- thanks!)

I nominate Billy for best Boss ever award

I can just imagine Billy having regaled Jeanie with stories about Lee and Amanda and how much fun they are to watch as they fight their feelings.. whahahahaaa… He would have relished going home and telling Jeanie of the new assignment and the new security clearance he had given Amanda.. whahahhahaa!!!
As we say goodbye to The eyes have it – a huge shout out again to magnificent Bitsy Beans for transcribing this episode – you should go on the barnstorm list Bitsy Beans!!!

[Er except it’s kinda  a dangerous list to be on

Happy Easter Long Weekend to you all!!