Amanda, alone in the blacked out cabin, lights her candle.. and she is spooked.. she hears a noise outside and mumbles to herself: I don’t like this!

So she takes her candle with her outside.. [I’ve adjusted the exposure on the pics in this sequence so we can see it – very dark! so hope they don’t look to weird! but well.. we want to see this next sequence! best part of this whole episode!

]
Before we continue though, help me out here.. see this photo below- I’ve turned it upside down-  look at the picture on the table – who do you think that is????!!!! Could it be… BB? I have no idea why it’s even there!

Anyway, Amanda goes and knocks on Lee’s cabin door.. she calls out his name, but not hearing an answer, she enters..
Amanda: Lee? Are you asleep?
We see in the bed, there is someone laying in it.. we are suppose to think it’s Lee.. but why Lee would be sleeping with a lit candle next to his bed is anyone’s guess!

(oh wait! could it be some continuity?? after all we learn in flight to freedom he is afraid of the dark! 😉 ) 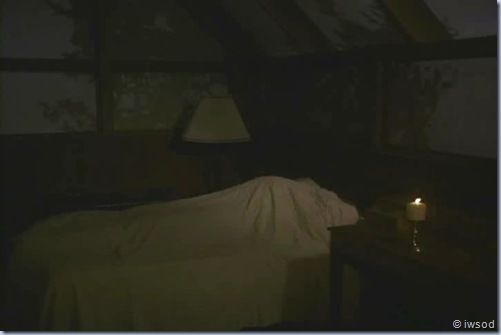 Amanda walks over to his bed, and puts her lit candle down next to his,
Amanda: Lee! I’m sorry to wake you up.
She pulls back the covers and gets the shock of her life!
A scarecrow!! Argh!!! She screams..  (I’ll join her.. screaming at how ugly those sheets are!! 😉 ) 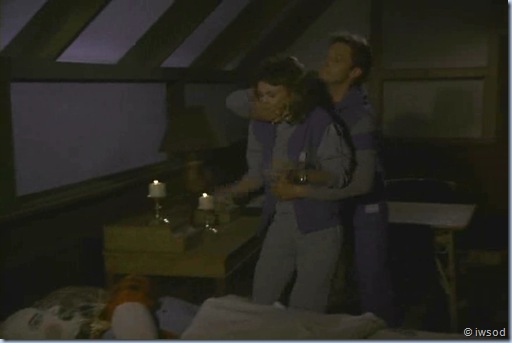 He holds her close.. ( hoo haaa..) and keeps his hand over her mouth..  You don’t mind if I include lots of pics of this do you?? didn’t think sooooo 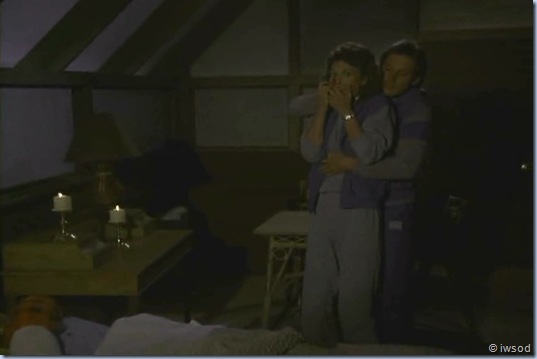 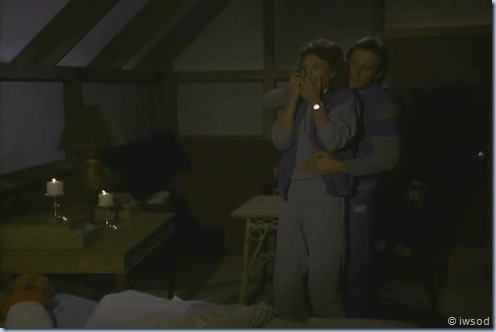 Finally, Lee begins to release Amanda.
Lee seems to have his arms around her for an awfully long time.. poor Amanda.. ahem.. that just must have been such a scary and unpleasant moment. ahem.. err standing there in Lee’s arms for a while! hehehe.. ( now if this was anyone other than Amanda, Lee may have wondered if she had come by for a little nookie!)  btw- that is one ugly scarecrow Lee made as his decoy! hehehee… I am use to seeing one really gorgeous scarecrow!

Is it just me, or do you think Amanda would usually have dared to enter Lee’s cabin, after dark- see him sleeping in his bed, go over to him and wake him up, pulling down his covers like that?? err because she heard a noise and she wanted to warn him?! I can imagine Amanda opening his door and looking the other way calling out to him maybe? ( like in weekend) but.. then we wouldn’t have the gag with the scarecrow.. and the loooong moments of Lee holding Amanda very closely..hmm this acting out of character thing can have it’s perks

Lee is doing a lot of touching here as he lets go of Amanda.. and walks around to show her what’s in the bed!
Amanda: what’s that!
Lee: that! is a scarecrow! (Lee holds the scarecrow’s head up a little for Amanda to admire,yes Lee Amanda Lurves scarecrows!! 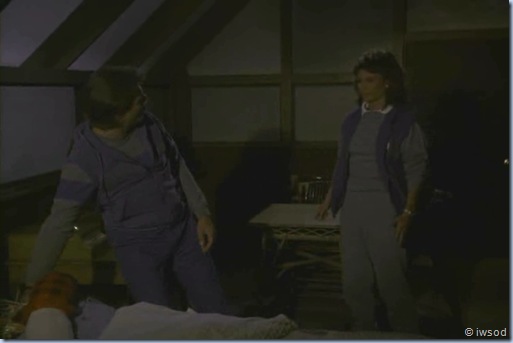 Lee: yeah. Ha. It was a precaution against any unwanted visitors
LOL- (you know what the ladies are like with Lee – phew!

) Lee covers the scarecrow up again .. I was out checking on the generator when I saw a  light moving through my room. What are you doing here anyway? 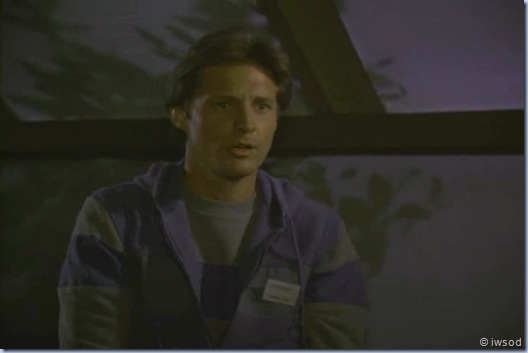 ( LOL! actually, now that I think about it- wouldn’t that be the first question teee heee)
Amanda: well I heard a strange noise outside and I… thought I should warn you.

…and I appreciate it very much. But I think I can handle things myself okay.(wha????)

Is it just me, or does  this seems awfully nice of Lee.. too nice?! It’s weird that he is so very nice! This is season 3 Lee talking here.. it is very strange after Bromfield Hall to be hearing Lee be soooo very patient and soo reasonable.. and complimentary.. Aie!  Where is Lee?? what did they do with Lee?

I know, I must be crazy to be complaining that Lee is too nice! when I have been wishing he would treat Amanda better – but in this context it doesn’t fit right. Amanda is being more dim, more infuriating, more interfering, and more annoying! why would Lee be suddenly treating her  much nicer than when she is being normal Amanda?! It’s a bit too much – and again, IMHO it’s another area where the writer is just off track in this episode!! I even wondered if this should come after Brunettes – and questioned this.. maybe I was wrong.. but it doesn’t make sense with the opening of the episode and Lee complaining about Amanda going – he wouldn’t be doing that if he had just accepted Amanda as his partner! Aie!! My head hurts guys!!! anyone else ?? It must be all that banging my head on the table, which Cindy suggested

Amanda: I’m going back to my cabin?

Lee: good I’ll walk you. [ LOL.. in other words yes!]
Lee has picked up his candle, mistaking it for Amanda’s, which he has left on his bedside table with the scarecrow.. I think Lee wants to walk Amanda back to her cabin so she stays out of trouble.. 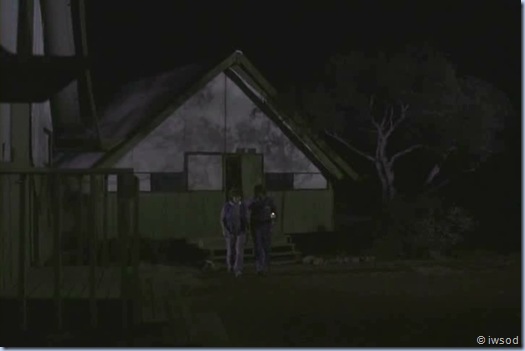 Lee and Amanda are knocked to the ground, unmoving..  The scarecrow dies!!! Noooooooo!!!!! nope, not Lee, the ugly one! And … we cut to a commercial break

I am so glad Amanda heard a noise and came to warn Lee … and I am so glad Lee picked up the wrong Candle and accidentally swapped with Amanda ( Hey! Lee sure is lucky too!! That must be what makes a great agent

We come back from the break, to find Lee and Amanda coming to.. Lee has his arm around Amanda on the ground, as if he had been protecting her.

Ohhh bless him! I do believe this is completely in character for our Lee

KJ and BB do a fantastic job of conveying the panic and disorientation of being thrown to the ground by a bomb!
Lee: are you alright Amanda?
Amanda: I don’t know.
Lee helps Amanda up off the dirt.. 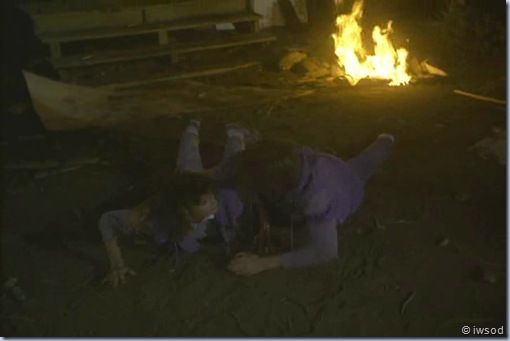 Lee: come on get up 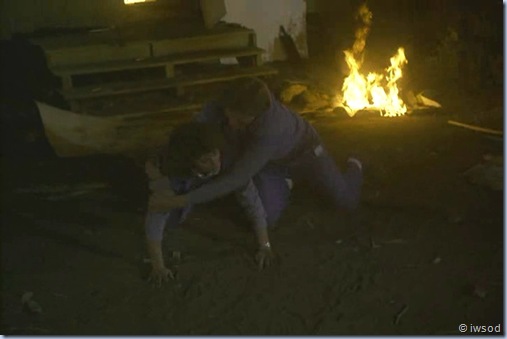 Lee: are you injured?? 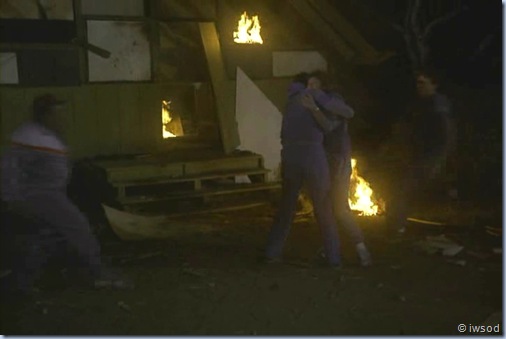 Others (recruits and trainers)  begin to arrive muffling this fabulous exchange between Lee and Amanda.. and bringing their hugs to an end – Curse Them!!!! [ this is the best part of this episode.. and the only reason I will watch it again in ohhh the next 5 years! ]
Billy: What happened???!!!!
Lee: I don’t know, (??) it blew, we were standing out here and then everything just went!
Billy: Alright the excitement’s over, Francine get them back to their rooms.

Off Francine takes the recruits back to their beds.. though seems no one is in the PJs yet

This would have been curious to the secret Pavolva, what was Amanda’s candle doing in Lee’s room?? it would certainly make the Pavlova suspicious wouldn’t it??
Now Billy is alone with Lee and Amanda..
Amanda: what is that smell?
Lee: It’s phosphorus. The space heater didn’t blow.
Billy: I know, I’m gonna have the lab people verify it.
Lee is angry now!: Well you better get them to do a cross reference on that MO because I got a hunch on who it is!

Billy: Leonid Vardosk. [ ahh see Lee.. your boss is not a complete dill.. ]
Lee: phosphorus bombs are his signature aren’t they?
Amanda: who is Leonid Vardosk?
Billy: he is the eastern bloc’s top exterminator, specialising in western agents.
Lee: yeah and it looks like I’m the agent he’s after this time.
Amanda: Ohh no!!

Lee: he can’t get to me directly so he must be running an infiltrator through this class somehow. My cover’s been blown Billy!

‘Blown’ Lee?? that is hilarious!!!! I am not sure this is intentional- but what a fabulous PUN! yes.. blown sky high by the big boom boom 😆
The irony is though, it isn’t blown… he only thinks it is..  but it got blown up anyway.. you following?

Billy wants to close the class down.. but Lee convinces Billy to let him be the bait to catch Vardosk!

Love how Billy is all worked up and says “you be careful the both of you! ” well der! hehehee.. 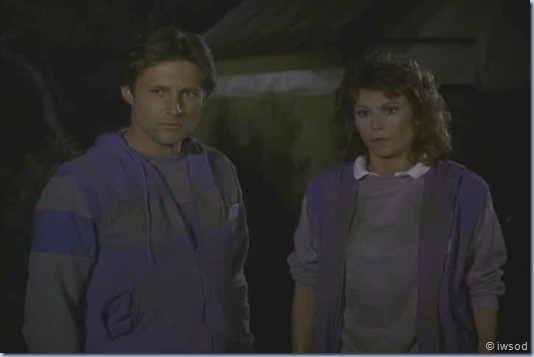 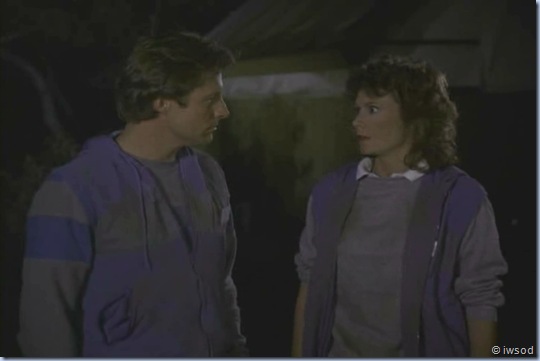 Amanda is pretty overwhelmed by everything ( another hug please Lee???) tee hee 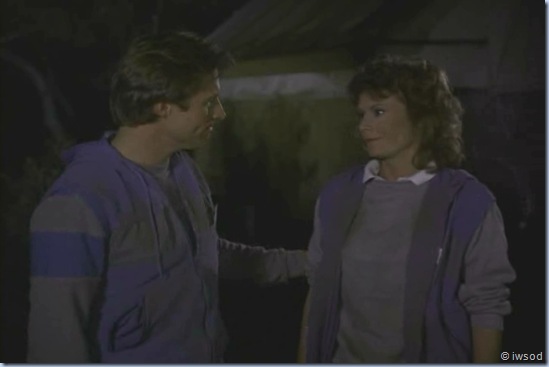 Lee puts his hand on Amanda’s arm to reassure her at the end of this conversation..

Hmmm so did they have a spare tent? where did Lee sleep that night?!! and.. what about the poor ugly scarecrow? !! hope they paid their respects! R.I.P scarecrow!

What do you make of Amanda’s reactions to the revelations in this scene where Lee and Billy argue about the next course of action? Amanda seems to react that Lee is a target..(with an ‘ oh no’ )  but only for a second..seems pretty wimpy… For me, I would have thought Amanda would have been more protective of Lee here – and that she would have argued with Lee that it is too dangerous or something.. like she has done in the past.. but.. then again, maybe this is a bit of character growth here.. it is hard to tell.. because I don’t trust this writer at all now!! What do you think?

I must say though, nice meaningful looks between Lee and Amanda at the end of this scene.. 🙂

Back to the downtowner, and Vardosk is talking into his suitcase again.. he is mad at Pavlova for the bomb mistake.. Gregorian’s pacing is annoying him.. and everyone is cranky! the bomb didn’t kill Amanda! And.. the element of surprise is now blown! – Yep! that Pun is intentional! wahahahahaa!
Vardosk: This King woman is either very lucky or very smart.

[I think this line of Vardosk’s sums up this episode very nicely indeed and what’s wrong with it! Amanda is very very lucky! and not at all smart.. he seems to think you can’t be both – and ordinarily, I would say Amanda is both lucky and smart.. but not in this episode!!! ] 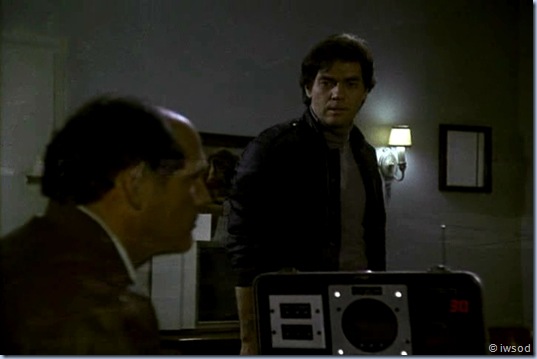 Gregorian wants to abort – but the boss, Vardosk says nooo they just have to think of another plan. LOL!. This is a mirror image of the scene we just saw with Billy (the boss!) wanting to abort and Lee coming up with a new plan and wanting to continue!!

I shall finish there for now.. I would LOVE to hear what you’re thinking!!! whatever it may be

Is this too much detailed agony for everyone? should I skip bits??  I love love love the hug after the bomb!!! 🙂 Episode Highlight!!

I think I find this episode difficult because I love the characters so much – and the characterisation is a mess.. but there are good bits in there too so I will stick with it..but can skip over some of the details if you prefer!  (and reduce my grumbles while Amanda bumbles) This makes me appreciate even more how great SMK is usually, seeing everything that is wrong with this ep!!