6/15- Season Three, Episode 19: The Boy Who Could Be King- Scarecrow and Mrs King

Back to Lee and Amanda helping Terry collect his newspapers off the ground. 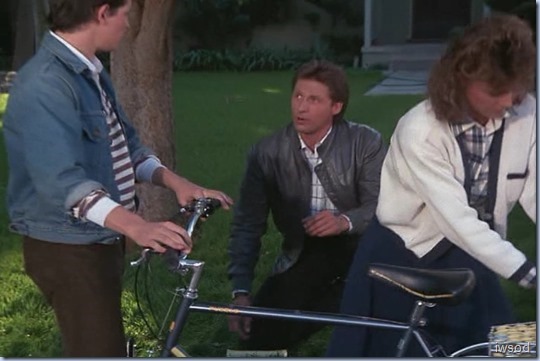 Lee: Are you sure you’ve never seen this guy before?
Terry: Nope, he sure was weird though.

Amanda: You’re gonna be all right?
Terry: Yeah, but my front wheel isn’t. Blew a tyre. You really swing a mean purse, lady.

[we can see Lee chuckle at this in the background

shaking his head. Has Lee ever been on the receiving end of her purse whack?]
Amanda: Well, I’m a mother, that’s just instinct.
[Beware Mothers with trigger happy purses.. ]
Terry: Well, anyway, take care.
Amanda: All right, you be careful. 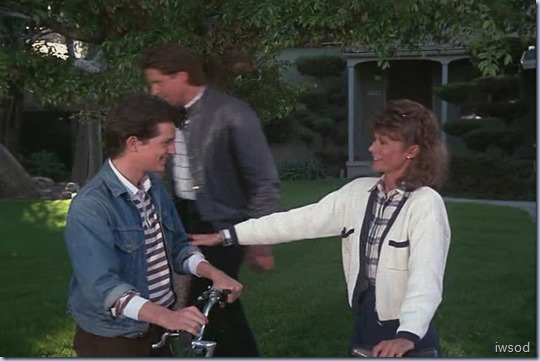 )
Lee: You know who the guy was that you clobbered?
(Lee dials up a phone number..)
Ahhh a car phone.. hilarious!
Amanda plonks the King clobber on the top of the corvette..maybe she put a dent in the vette?!

Lee: It was Edmund Spencer. 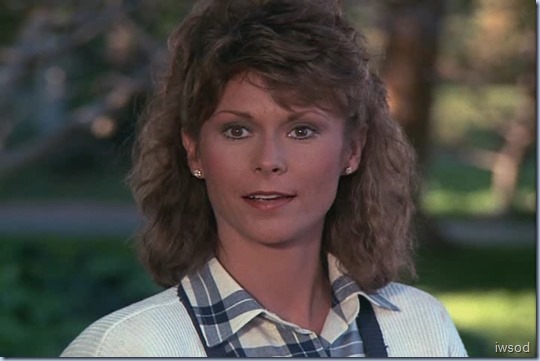 Lee: The King of Cap D’Far. 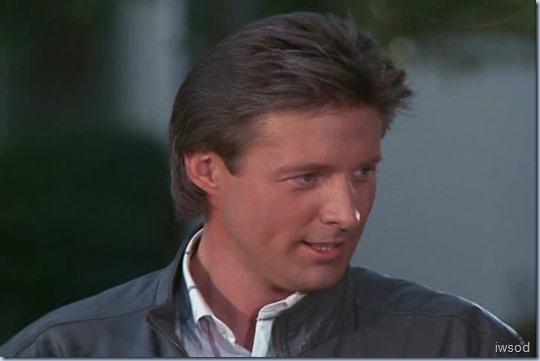 Amanda: Where is Cap D’Far? 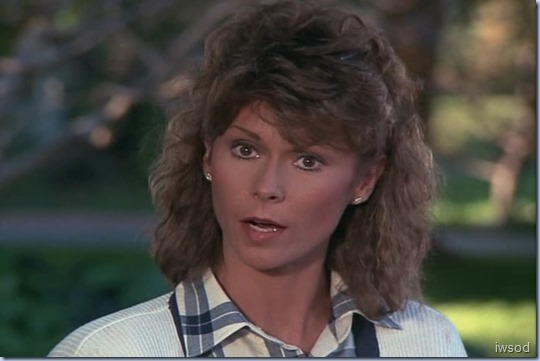 [Isn’t it fabulous to see Lee and Amanda outside in close up with some natural lighting?! they both look gorgeous..]
Lee: Cap D’Far is a practically non-existent country. He comes here every couple of years to play at the DC Jazz Festival and to charm the US out of a little foreign aid. 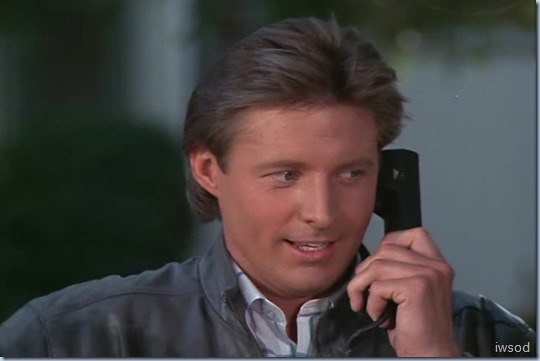 Amanda: Now wait just a minute – what was he doing following that kid?  [I’m assuming they asked that kid his name and actually confirmed it was Terry! we just didn’t see it!]

Lee: He’s no ordinary kid. He’s the kid who’s name was in the pocket of a dead hitman. [stay with us Amanda!] 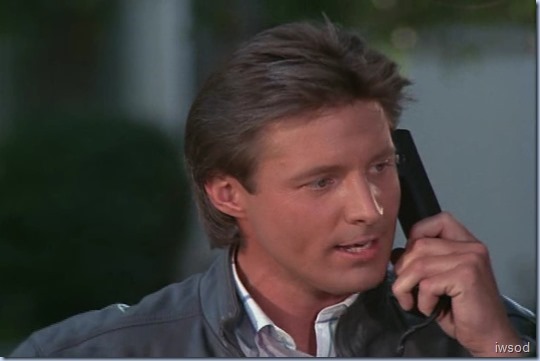 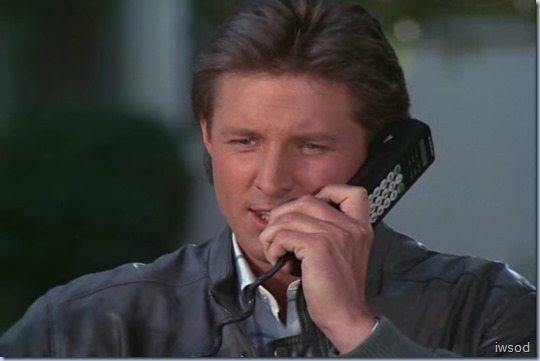 We cut back to Billy’s office. Rofl!!!!! We cut to Francine.. covered in confetti.. her hat netting there seems to be all torn.. she’s dishevelled, deflated, and disappointed

whahahahaaaa!!!!
I love how smk goes for the humour with it’s edits!
[We could argue she has been ‘King hit’ too!

but that one is only a double pun. Meh. we try for triples?!

…Look, something very strange is going on and it has to do with your friend, King Eddie.

Billy: Well, he’s supposed to be rehearsing for the Jazz Festival at the Civic Centre Club.
Lee nods: I-

Billy continues:  Why don’t you get down there – and have Amanda speak to the boy’s mother.

Lee: Billy, King Eddie is a friend of the State Department….

.,.Now if he is in any way tied to the John Doe they pulled out of the city dump, it is trouble anyway you toss it…

…Now there is one person I know of who could get close to him.
Billy: No, no, don’t even suggest it.
[haaaa come on Billy. Take one for the team!]
Lee: Billy, when you were assigned to him, he never knew your connection with the Agency. You could use the same cover.
Billy grimaces.. eek!! must I?! Ohhh!!!!

Billy: Ahhh. All right, I guess I can dust the old axe off. 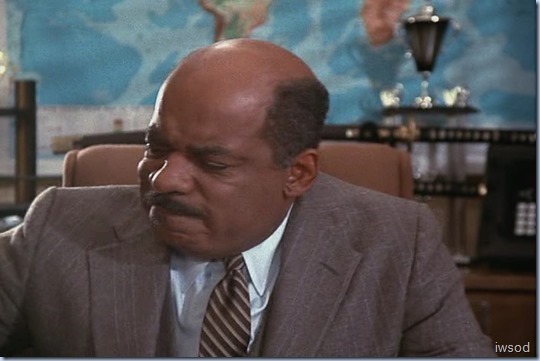 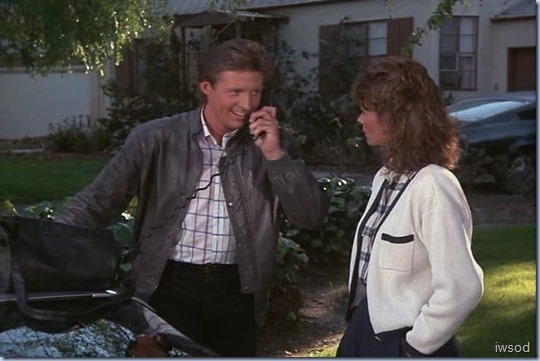 They hang up.
Francine: Billy, listen, if there’s a connection between the dead man and the King, then this is a whole new ball game we’re looking at.
[Thank you, Ms Stating the obvious]

Billy: Well, I’ll handle it. Why don’t you just go home and clean yourself up.
Francine: Yeah, I’ll do that. And I’ll have you know that I’m putting in for hazard pay on this one.

[LOL that suddenly in the close up Francine has new confetti added her hat. If Francine gets hazard pay for that.. then Amanda should get it for having to deal with T Wall!]
Billy: Well, Francine, I’m sorry I didn’t warn you about the King’s lifestyle.
[For me – I think this is generous… Billy.. did try to warn her and she cut him off!] 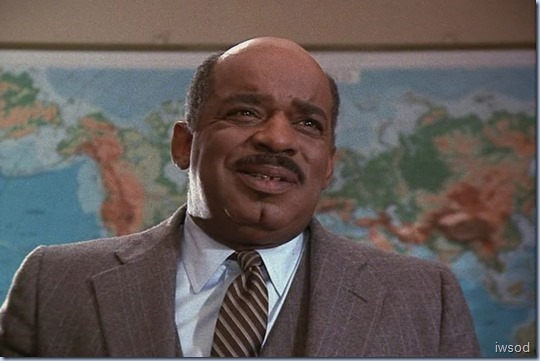 Francine: Style? Oh no, no. This has nothing to do with style. The next time you send me out to meet royalty, I’ll know what to wear. I’ll wear a Hawaiian shirt and a bota bag.
[Hey don’t knock the Hawaiian shirt. They rock. Especially ones that morph when sprayed with beer

Francine leaves.. and Billy wipes the confetti off of his desk and says to himself: Think you got problems? Just be glad you don’t play saxophone. [If she had played saxophone she may have been in with a chance for her royal aspirations

Uh oh.. Billy’s got the Blues

That’s it for now! If you are reading and new: Welcome! Feel free to join in the discussion!!!! Your first comment will go to moderation.. If your comment makes clear you are an smk fan wanting to join the fun, you’ll be approved promptly and free to join in as much as you like with no further delays. Hope you are all well!!! bye!