13/15 Season Three, Episode 19: The Boy Who Could Be King- Scarecrow and Mrs King

Looks like once the baddies arrive to interrupt this father/son moment.. we went to a commercial break.

Back from a commercial break.. and we find Billy on the car phone in his car – When Terry arrived we saw this car parked here in front of the Embassy..
LOL at the marks on the road for where the car needed to be parked!

Billy: This is Melrose here, Priority 1, please…
[We see Lee pull up in the vette]
…Abort, abort – the subject has just arrived. Thank you, over and out.
They both get out of their cars and meet.
Lee: Terry?
Billy: Never showed up… [Someone get Billy some glasses.. he couldn’t have been looking very hard. Did Lee call Billy on the car phone to tell him to look for Terry?] …Where’s Amanda?
Lee: Behind me with Sandra. [Lee and Amanda have been split up a lot in this ep!] 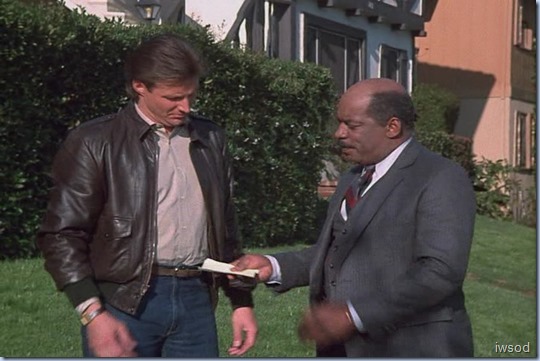 Billy: Well, I’ve got some interesting info from the King’s doctor.
Billy hands Lee a piece of paper.. and lol random.-Amanda and Sandra drive by fast and blow their horn. Hoons!! 😉

Lee: The King is suffering from an overload of vitamin A? Is that all?

[LOL Lee looks confused. I’m confused! When did Billy get this information from the doctor? He just saw Eddie taking a vitamin A tablet.. weird. Did he visit the doctor and come back to the embassy? (while he looked for Terry?!) that’s weird too, because if that’s the case, why did he choose to call Lee from his car only once he had left the doctors and driven back to the embassy?! Me confused..
I think I should cut down on my vitamin A intake

]
Billy: Well, apparently too much vitamin A causes a condition that mimics the early signs of a brain tumour.
[So he’s not dying? well I dig that! Hey – has anyone looked this up about Vitamin A thing? Is this true?! ]
Lee: Well, you better be careful how you break the news to him, huh?
Billy: Yeah.
Lee: Might do him in.

They share a chuckle.. great news he’s not dying but err there are still baddies out there.. focus men!

We see Sandra drive around the corner with Amanda, they have  a side view of the Guest Lodge apts..
..and see Eddie and Terry being led toward the beige van of doom.
Sandra: Amanda, look! They’ve got Terry!
Sandra stops the car [LOL at all the crew members reflected by the car for more than a few seconds here.]

Amanda’s door is blocked by garbage bins..[Okay trash cans!] so she’s delayed as Sandra runs ahead after Terry and towards the baddies
…No!
Soriakhof: Stop.
Sandra: Let him go!
Sandra hitches a ride. Aie.. Just what was she thinking??!! I guess she wasn’t.. and who am I to know what a mother watching her son get nabbed should do?!

The van zooms back onto the road and takes off. Amanda zooms off too – LOL at all the OTT screeching tyres!
Whoaaa this guy is bad – he just zoomed and screeched right through that stop sign! [Is there a Hollywood sign on that mountainside? I wish..]

Amanda screeches (yes more screeching) to a halt and calls out to Billy and Lee to get in.

Amanda: Come on! Come on!
Lee: What is it?
[lol didn’t Lee notice the screeching fast van in front of Amanda?! tee hee.. Lee needs to cut down on his Vitamin A!]
Oh hey! this time Amanda scoots over and lets Lee drive. Hmm..
Amanda: Follow the van!
Billy: Go!

Next thing we see an airport.. a big one!

We see the beige van drive into a rather quiet corner of this oh so big airport..
Terry, Eddie and Sandy are led out of the vany at gunpointy.

Soriakhof: How long before we’re airborne.
Crowley: 15 minutes. We’ll be cruising at 12,000 feet.
Soriakhof: High enough. You won’t feel a thing when you hit.
[Ummm is he saying the plan is to push them out of the plane?]
King Eddie: Look, look. You can have me and all the rocks you want on Cap D’Far, just leave them alone. 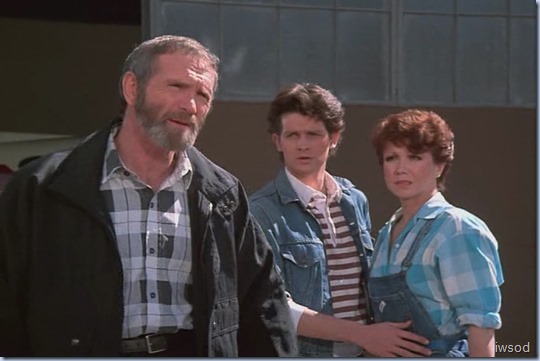 Crowley: Don’t try to be heroic Eddie, it’s so uncharacteristic… 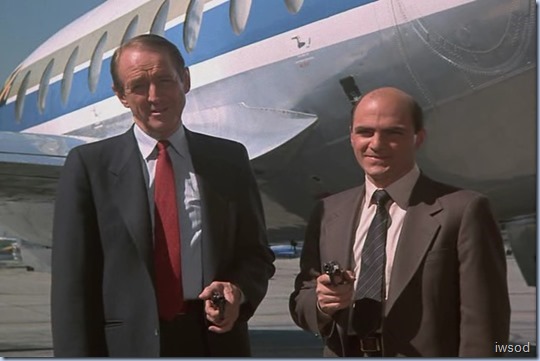 [Ah Crowley.. he loathes Eddie! Eddie is finding hidden depths now his family are in danger. I guess he thinks he is about to die still at this point.. so he has even more reason to be heroic- like he needed anymore reason anyway I guess!]
Eddie lunges for the baddies.. but really doesn’t get very far. Nice try Eddie.. Beige baddie punches him in the stomach, and Sandy and Terry help him up.
…All right, get him inside…Inside!
They head into the terminal.

Inside the terminal, the baddies shove the three into a back room.
Sandra: Oh Eddie, are you all right?
King Eddie: Oh, boy, I – I just put a down-payment on the ranch, Sandra. Being alive in any condition is groovy. Besides, I always wanted to do something for my son… 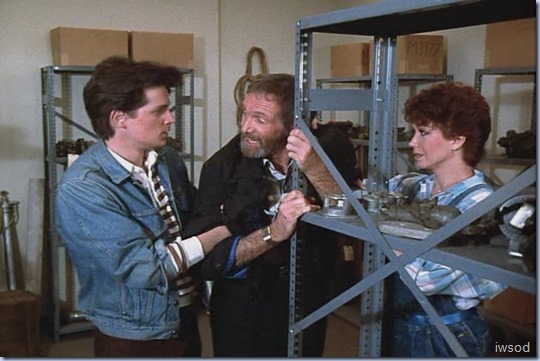 [Awh!! speaking of hidden minerals in rocks.. I think Eddie is a bit of a diamond in the rough!]
…Now, let’s figure out how we can get out of this mess, heh?

Outside we see Lee and Billy getting out of the car. Amanda scoots over to the driver’s seat.
Lee: Now, Amanda, you stay here in case we need you to go get some help.
Amanda: Right.

Back inside we find Sandy and Terry banging on the door..
Sandra: Help! Help! Something’s happened to the King.
Terry Wall: Please help us!
Sandra: He’s stopped breathing! Call a doctor please. Please! The man is dying.
[Ohhhh so the plan is to pretend Eddie is about to die? Um the baddies want to kill them all. Why would that motivate the baddies to act? they can throw him out of the plane already dead no?]
Terry: Help! Help!

Beige baddie approaches and begins to unlock the door.. Sucker!
Sandra and Terry rush over to Eddie while beige baddie unlocks the door..

We cut to Lee and Billy sneaking in the back way. 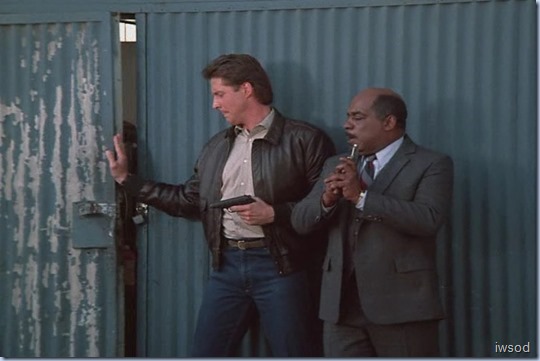 rofl at the sneaky music! I don’ t think I’ve heard that one before.. it’s been.. jazzed up! I dig it man!! Groovy!

We see the beige baddie enter the back room gun drawn. He motions for Terry and Sandy to move back, while he bends down to check Eddy..

lol he’s a dumb beige baddie! Terry wacks him with a piece of wood.. but lol I could have sworn beige baddie reacts before Terry actually hits him!

See above? grimacing before the wood hits. LOL..
Hmm maybe Eddie gives him an elbow in the stomach.. but I can’t see him connect.
Maybe beige baddie put his back out?! Ouchie.. even the way this guy gets taken out is beige!!

Who else is longing for a bit of Lee and Amanda interaction???!!!!

I’m going to pause here.. Any thoughts or comments you’d like to share? Thanks for reading! byee!