Welcome back to the third and final part of Lee’s apartments. SilverCorvette is back….!
Burn Out – Episode 21 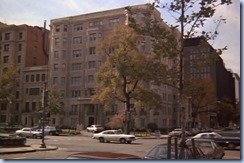 With some changes (a plant instead a vase of stick things)
this looks the same as DOA – lots of oriental art.
Umm, Lee’s security must be pretty minimal, Bracken just
used his lockpicks and walked right in ? 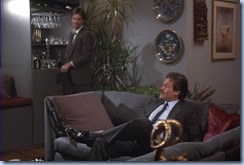 Those plants beside the bar (I think we call them Drucena
here in Australia) are looking a bit poorly. Hasn’t Amanda
been around to water them since DOA ? 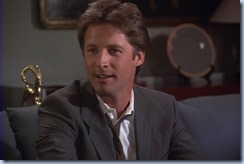 That gold antelope ? is still on the narrow table, but that
plate/dish thing was not over there under the picture before.

And this is all we see.

So this pretty much looks like the DOA apartment.

I hope you have enjoyed looking through Lee’s apartments
in Season 2. I will be back with Season 3.

Thanks to SilverCorvette for updating Lee’s Season 2 apartments. Any differences between this apartment and the DOA apartment?
Bye from the JWWM team