3/21 Season Three, Episode 22: All the World’s a Stage–Scarecrow and Mrs King

Brace yourselves everyone.. Francine is entering Billy’s office.. 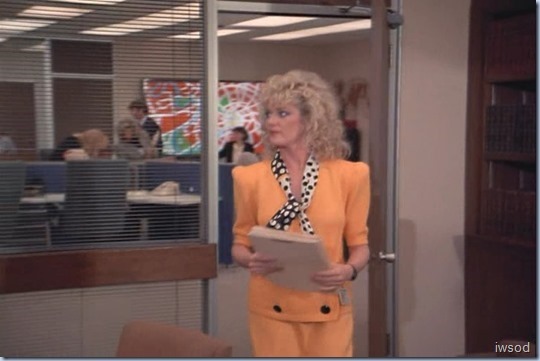 GASP! What the heck is she wearing??!!! and.. she’s had her hair permed? Was it permed in previous eps? LOL maybe it was and I just didn’t notice..
Billy: Francine what were the results on those scripts from Crypto and Graphology.

(Francine puts a file on Billy’s desk for him to look at)
Francine: Well good news and bad. Crypto says not exactly Anton Chekov, but clean. [every one is a critic!] Graphology on the other hand, made a handwriting analysis of the notes in the margin? You ready for this? There is a 75% chance that it’s Dr. Serge Krutiov! 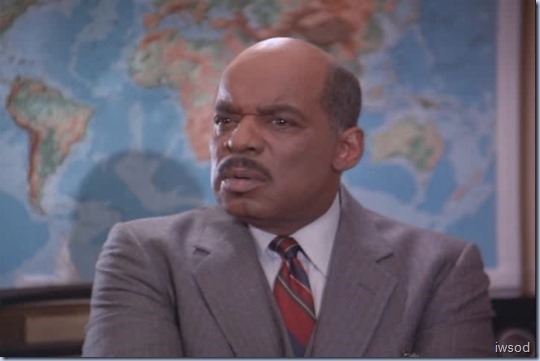 …He’s Vienna-trained, a shrink , he took the art of psychological warfare to new lows. [whoooo look out for those shrinks! SMK loves to paint them as cunning baddies or kooks. (IMHO of course). I love how smk just throws in these random bios when it seems to me that it isn’t specifically aimed at filling in Amanda as a newbie anymore.. Lee seems to just talk to the room! Could have been interesting if BB had talked to camera

]
Amanda: Yeah I know, I read a Kremlin study on him. They call him the puppet master.
Lee: Yeah, well that’s a polite description believe me. I’ve seen what he’s done to people’s minds, and how much he enjoys it. He’s sick! [yeah! those shrinks are sick! Oh smk… give us a legit psychiatrist or psychologist just once?!  and no I don’t see the agency’s shrink as legit. He’s portrayed as a kook.]

[Whoooo talk it up Lee! We’ve got to believe this guy is a bad, really really bad baddie. But.. will he beat Sallee in the golden teacup awards for season 3?! ]
Billy: And he’s big league, so if he’s involved in this, it’s important. 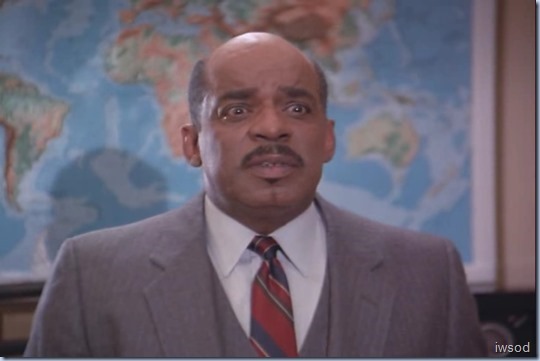 Lee: I want this one, Billy

Billy: You got it. I want you to start with Carl Valentine, the guy whose producing Martinet’s play. I think he brought the Bolshoi to North America a few years ago. Maybe he’s still got some connections with the Soviets. Amanda? 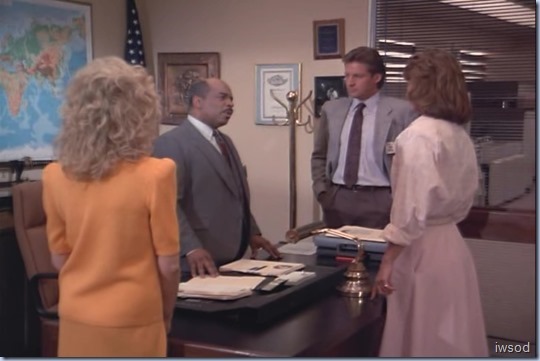 Amanda: Yes, Sir.
Billy: Cover the rehearsal, and see if you can pick Martinet’s mind a little.

(love the little eyebrow raise he does here, like he wants Amanda to get all brain bender!)
Francine: Uh excuse me Billy,…

…but if Krutiov is involved in this, I mean,… 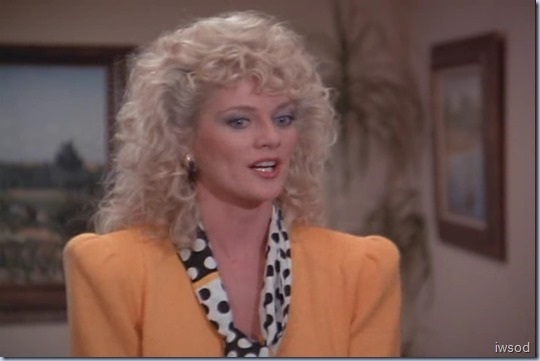 …don’t you think that qualifies for a trained agent?

[Love how Francine gives Amanda a little look up and down.
Though I do sense there is less venom in this question than there use to be.
I guess Francine missed the part where we learned Amanda has knowledge useful to the case. But.. it’s been a while since we’ve had this protest from Francine no? And besides.. Amanda is now trained! Just not fully trained

and she’s just ummm not an ‘agent’ ugh… sooooo over this! Three seasons of it and I’m done. Get her a badge already! I bet you are all over hearing me complain about it! 🙂 ]
Billy: The fact is right now we don’t know what we’re dealing with- 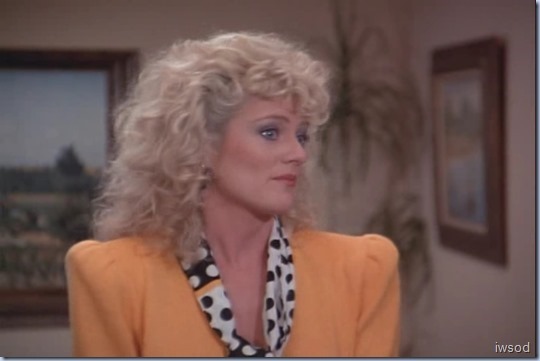 Billy: AND, Amanda is familiar with Martinet’s work so this could be a valuable asset at this stage of the game.

Francine: Right!-
We cut back to Amanda.. fleetingly seeming to enjoy this little moment of Billy backing up his choice of Amanda 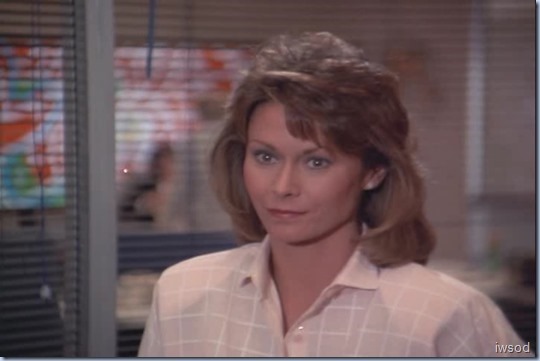 Have we seen Amanda enjoying this before? I could have forgotten but I don’t think we typically see a close up on Amanda and her reaction like this.
Billy (to Francine): SSSSH…

(Billy turns to address Amanda) …Amanda,
(she snaps out of her enjoyment!)

…if it does get hot, I want you on the bench, understand? 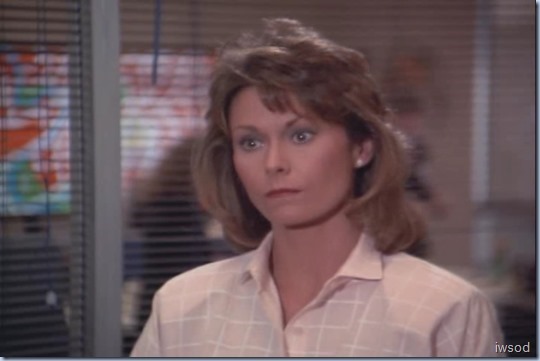 [Lee looks a little umm.. how would you describe it? sorry it has to be this way but it’s best kinda thing? maybe? thoughts? Or maybe it’s an expression for Francine? Saying too bad? anyone? ]
(Both Lee and Amanda leave.. Lee tries to get the door, but Amanda beats him to it, and they seem to open the door together.)
[LOL. Lee is just itching to open doors for Amanda these days

Ta da! We see a business building with satellites.. Riveting!

Is this something to do with the old star wars program?
We find Maria Von Clausen sitting at her desk in front of a blackboard full of some mean looking equations. This woman is smart!!

Maria: Hey, two days until opening night. I thought you’d sound happier. Or are you getting bored with me.
[IMHO sounds more like teasing than genuine insecurity]
Oh my gosh!!! Maria is talking to Robert Castille from Vigilante Mothers?!

Oh nooo!!! He got out of prison? He’s up to his old tricks charming women to use them??!! Hmm.. maybe he’s after these tricksy laser technologies too.
Castille (?):Well I’d spin a line about what’s an opening night compared to a night with you but you’d accuse me of being a bad writer.
Maria: It’s not your writing I’m thinking about right now. [hooo haaaaa! Castille has her hooked! Oh wait.. opening night.. being a write – this is Tony Martinet? Castille has this alias that he’s been working since the 70’s? whooo he’s good!!

]
Tony:  You’re sweet. Ah don’t mind me,  I’m just grinding my teeth about the backers, they’re braying about idiotic changes to the script.

[Ugh. that sweater is awful!]
Maria: Its your play, Tony, don’t change a word if you don’t want to. And stop worrying. Save your energy for us, for tomorrow. I don’t get to see enough of you to appreciate an off night if you follow my drift.

[Wow. she’ s demanding! Stop worrying and perform for me! Is this a genuine relationship? or is he playing her? This demand from the outset IMHO raises questions about the quality of this relationship. She is supportive of him valuing his work I guess.. oh well, this all keeps the plot interesting!

Tony: Carl, what is this? The script is set you know that.

Carl Valentine: Oh Tony, it’s all part of the process; 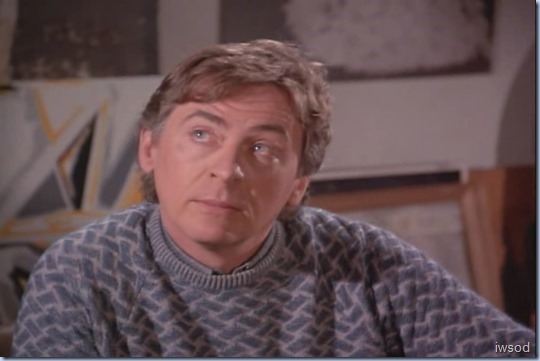 …You never should have seen this… 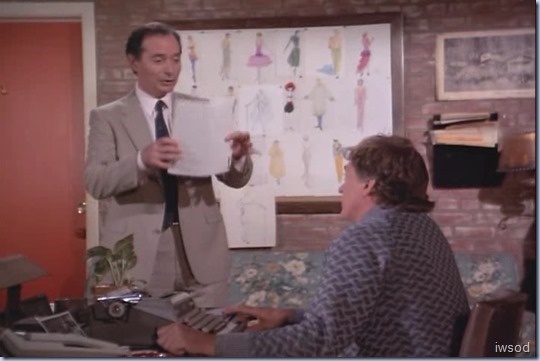 (Valentine drops the script with changes into the bin)
[Okay, now who is playing who! I’m suspicious of everyone!]……Now will you go to work please?…

…You’re brilliant, the play is brilliant….

…Leave everything else to me.

(Tony gets up to leave, he doesn’t seem terribly reassured..
Valentine takes a seat and dials a phone number..) The scene ends there.

So, we’ll pause there for now… what to you all think? Anything you’d like to share? Questions? Observations? Gripes? Comments? Compliments for this part of the ep?