4/21 Season Three, Episode 22: All the World’s a Stage–Scarecrow and Mrs King

We cut to a theatre exterior – Parisian Intrigue signage going up.

Inside, Lee and Amanda enter the theatre – do you think this is the same one where they filmed DOA: Delirious on Arrival?
Amanda is all excited.. and Lee is smiling and attentive 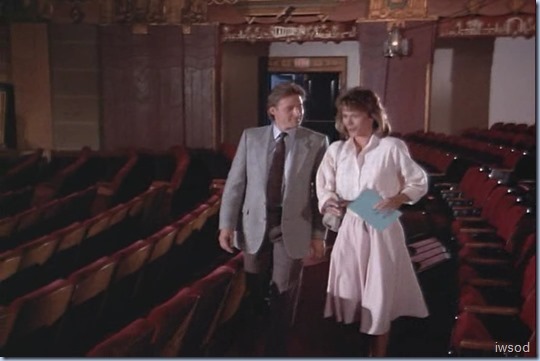 Amanda: There’s just something about the smell of the theatre, isn’t there?

[Ah Lee. You are such a romantic

you just errr sometimes try to hide it!

]
(they both pause and look up at the stage.)

…Ah, that’s Martinet talking to the blonde at the bar. 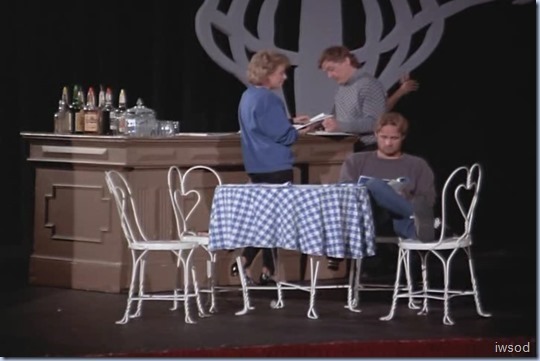 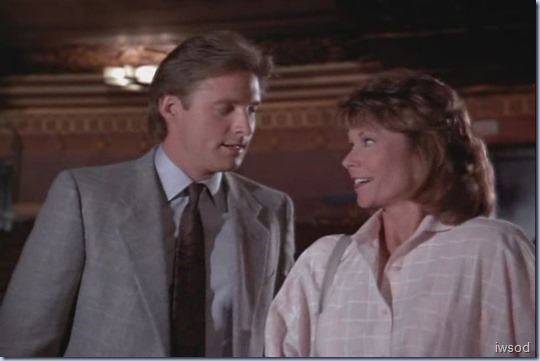 Lee walks off, toward Valentine.. we see him make contact with him in the distance and walk off with him.

Tony is on stage directing the blonde in her performance.
Tony: The bottles are sugar glass so you can really bash him,..

[whooo I’m guessing I’ll need to remember that for future reference?!]
… and just spit your line in his face.
Blonde: Your corruption is complete! Swinehund!

Tony: Good, but even more venom.
Happy, Tony catches sight of Amanda.. he gives her  a smile

(he seems to be expecting her) and walks over to meet her. 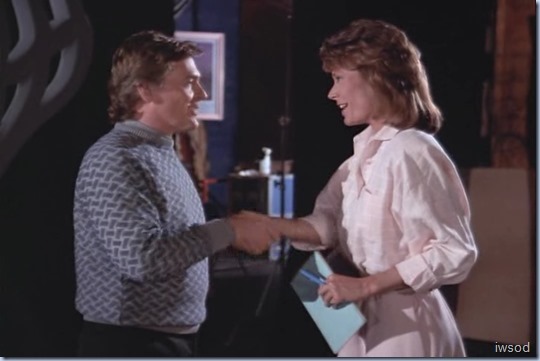 Tony: Yes hello, I’m sorry to keep you waiting, I’ve been tied up with my producer.
Amanda: No problem at all, I hope this is a good time for you.
Tony: If you promise the cover of your next issue, I’m yours. 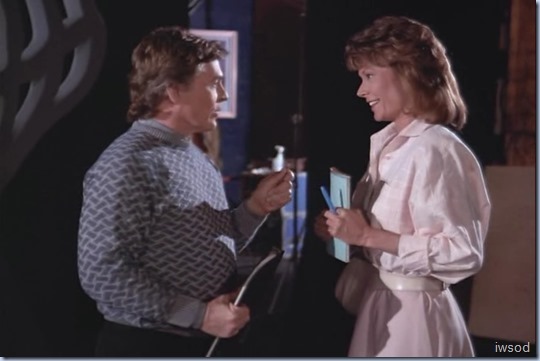 Amanda: Ah well.
Tony: Over here.
(He directs her over to another part of the theatre.)
[Tony seems nice enough.. no jerk radar going off..]
The scene ends there.

We see a Georgetown vista..
Lee is playing the role of earnest interviewer of Carl Valentine. Valentine: I’m doing this play because it interests me.
Lee: But a producer of your stature, why Martinet?! His track record is pretty shaky.
[lol this is pretty obvious flattery! But.. maybe Valentine is arrogant enough to accept it 😉 ]

[Oh no Lee your hair is getting long in the back.. edging into mullet territory. Me no fan

focus on the wonderful suit Lee is wearing Iwsod!… and Lee in the great outdoors is always good 🙂 ]
Carl: But his dramatic work is solid, it’s profound, it’s even visionary. Dramatic tastes go in cycles and I think Martinet’s time has come again.

Lee: Ah, so you think that Martinet’s play can pay off? 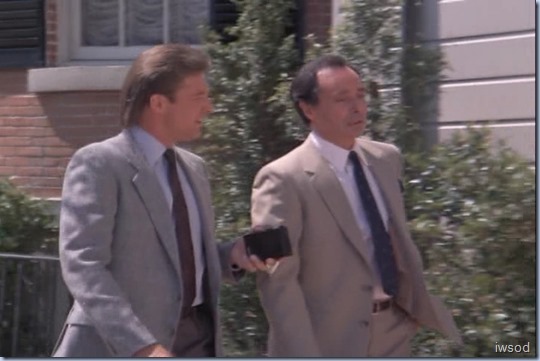 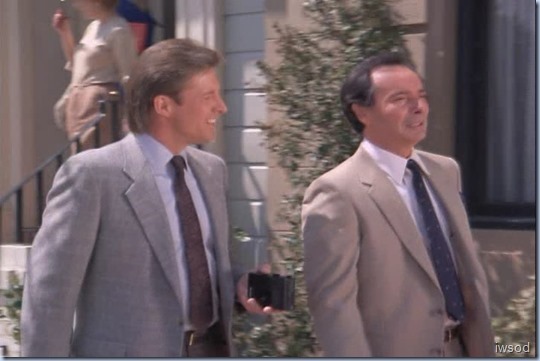 … Now please excuse me, I really have to leave you now.
Lee: Ah one more thing, err off the record,… (Lee makes a show of switching off his tape recorder) 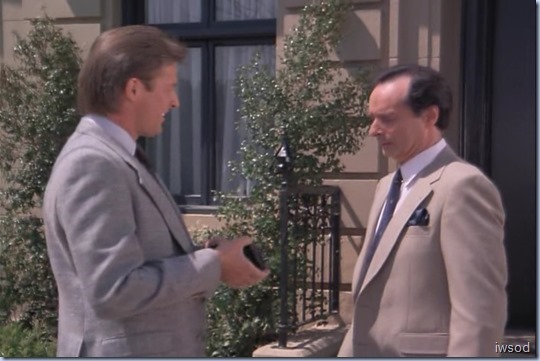 …we haven’t seen the Bolshoi Ballet in DC since 1981, now are you planning to bring them back at all?

Carl: Oh, absolutely not! I will have-  I took such a bath on the Bolshoi, the overhead was monstrous, the artists were temperamental and the red tape was simply endless. No thank you, I will never do business with the Bolshoi again.

(That said, Valentine walks off)
Lee chuckles and calls after him : Well, that’s our loss isn’t it? 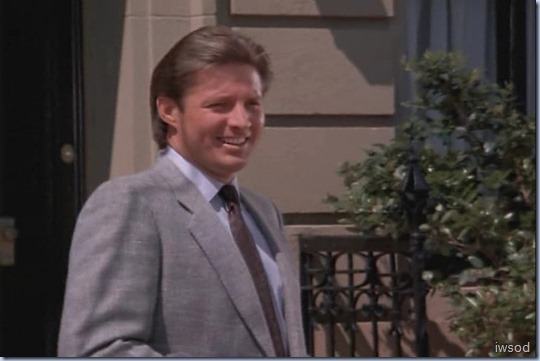 Back to Amanda Keene’s interview for Washington after 5 with Tony Martinet!
Amanda: So, after the off off Broadway production of Institutions in ’76 ….

[off off broadway? oh dear!]
Tony:  Ah how shall I put this, a period of intense introspection. [Where Tony took on the persona of Robert Castille and tried a new occupation! 😉 ] 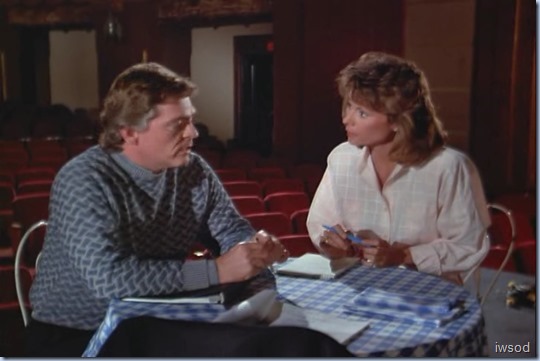 Amanda: Hmm well I know the audience for Neo-Absurdism theatre kind of dwindled. 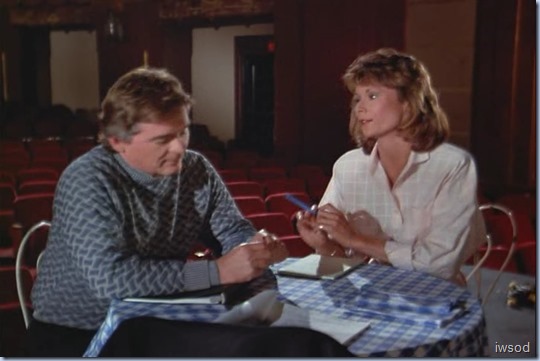 Tony : I couldn’t get arrested. You know Neo-Absurdism?

[Why is that so absurd? Okay.. I know it’s absurd but.. I don’t know Absurdism nor Neo-Absurdism. Am I absurd?]
Amanda: Well I’ve read all your plays, I was even in a production in college. Tiger Tracks, I was the Wailing Walrus. 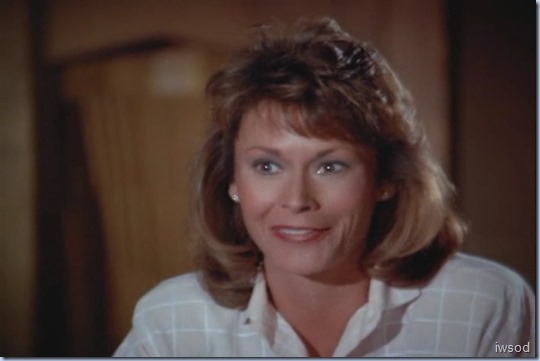 Amanda is genuinely enjoying his work. She’s perfect for this cover!
[Whooo was that around the time of I am the Walrus?! So come on guys – anyone a theatre history buff? anyone able to enlighten us on all this? Is it legit? this Neo-Absurdism? or.. truly absurd? do tell!]
Tony: Oh yes?.. 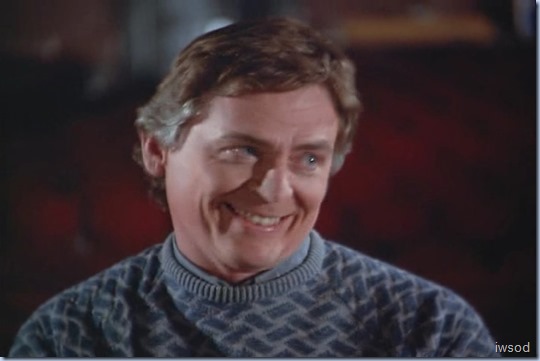 [Awh. A weight seems to come off Tony’s shoulders, he’s thrilled to meet someone who loves his work – likely the work he was passionately crazy about.]
…Well you’re perfect.

Amanda: Ah, I think my favourite line was, um, “I don’t care what the king says….

Together: …pickle that herring!”
[rofl!! what a fabulously absurd line of dialogue! I think the writer had loads of fun with this ep!]

Tony (laughing): I think you do understand…

[I can hear a whoosh sound.. very loudly.. anyone else? It’s this meaning going right over my head!!!!]

…You know, we just lost the understudy for the female lead. Would you be interested? [Don’t be absurd! 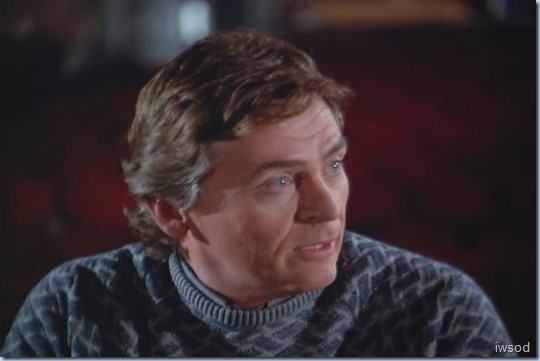 Amanda: No, I couldn’t do that,.. [Amanda seems to automatically say no here I think] 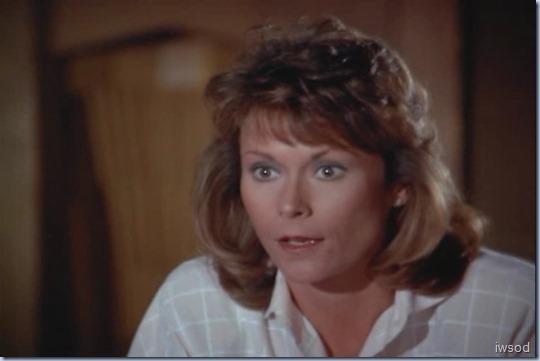 …No,  no absolutely not. That was in college. 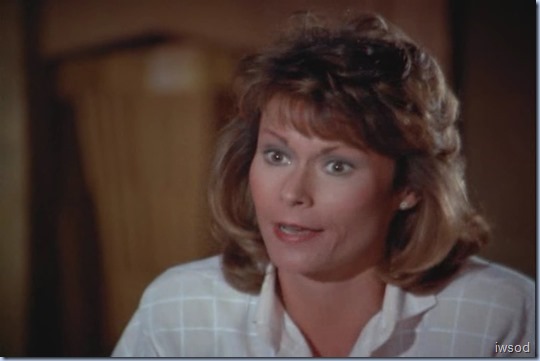 [I don’t know if its intentional, but her reticence makes her above suspicion as anything other than a reporter. She’s really selling this cover!

He’d never guess she’s with the errr civilian auxiliary.. ahem.. yes iwsod is being tongue in cheek- and rather absurd..]

Tony passes her the folder containing the dialogue.
Amanda: Well, I’ll give it a whirl. 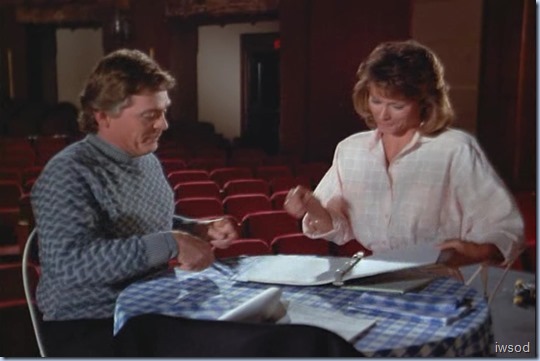 The scene ends here.
Oh drat! We are left in suspense.. how did Amanda do?!!!!

Okay! I’ll pause here.. wonderful to see Lee in the great outdoors again, in a lovely suit.. and with my favourite tie on no less.
Lee does a good job with this cover.. it’s been a  while since we’ve seen Lee do a cover not for laughs (i.e. obviously poorly). would you say? It’s not just Lee doing a great job with a cover!! So is Amanda!!! Amanda is sticking as close to the truth as she can.. and she’s doing a great job wouldn’t you say?