7/21 Season Three, Episode 22: All the World’s a Stage–Scarecrow and Mrs King

Back to the place of large satellite dishes ( The Strategic Defense Initiative Research centre). Again we find Maria working away at her desk. There’s a knock at the door.
Maria: Yes. 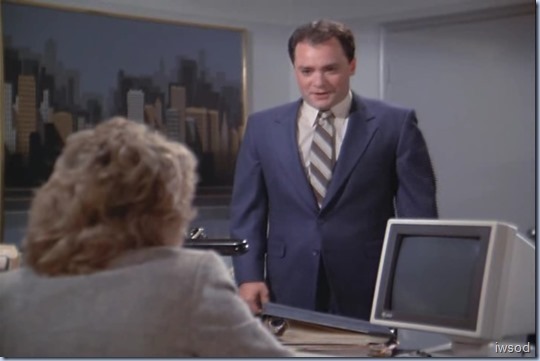 [LOL is this guy security? He wasn in that first photo of her wasn’t he… Love how it’s 3.47 – not 3.45! ]
Maria: It’s so cute the way you turn my little rendezvous into full blown security operations.
[I suspect it isn’t really so cute..]

Walter: Well, it’s my job ma’am , 24 hour guards, besides, it’s only once a month.
(Walter the bodyguard tries to make light of it.)
[It’s all a bit awkward!]

[Ugh!!! Pointing out that everyone knows how often she’s gettin some good lovin?! Not a good tactic to help her feel comfortable about it!!!! No job is worth that!!
Didn’t Princess Penny have a similar problem she shared with Amanda before Lee barged in searching for orange lipstick? ]

Maria: You know it’s so comforting the way you make this public life seem so very private. It is private,Walter, isn’t it? You don’t listen or have cameras or anything do you?

[She appears happy, but I’m guessing she isn’t.. or she wouldn’t be asking this question!]

Walter: Miss Von Clausen!  We , we don’t ..we wouldn’t…
(He pauses so stunned at what he just heard) 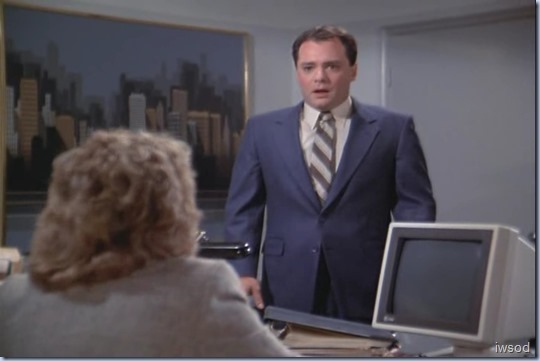 (words can’t express! rofl. He begins backing the heck out of there) 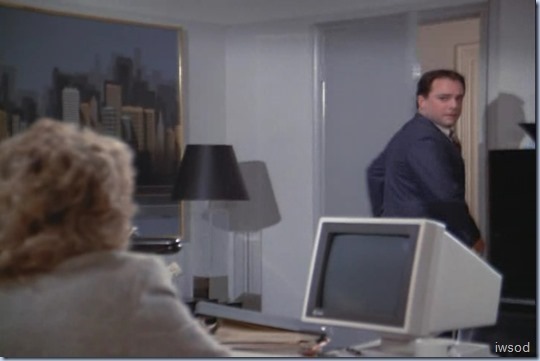 … heck no. Huh….
[rofl. his reaction is priceless! And rather unrehearsed

Which is probably why she surprised him with this question!] 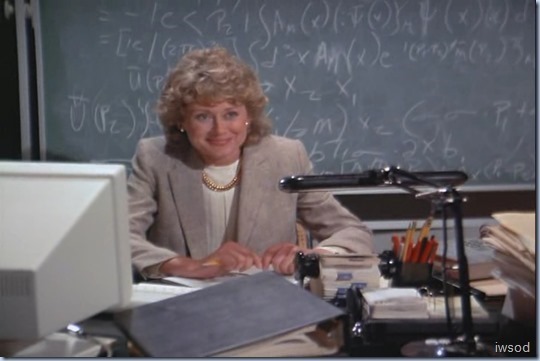 Maria has a little giggle to herself about making Walter so shocked and awkward. So, the lady has a sense of humour! [I’d say to put up with this scenario you’d need it!!] This makes me like her a little more (as I don’t know what to make of her). I also am not sure what to make of this relationship. She meets Tony once a month.. for how long has this been going on? I’m still not clear on whether this is a genuine relationship. It could just be a fun convenience, rather than a true unbreakable partnership – I’m wondering if they are like Lee and Amanda.. and so far I’m not sure at all! Maybe they are the anti Lee and Amanda!

Back at IFF the next day, in the Q bureau, Lee and Amanda are working on Lee’s computer.

[LOL it must be love.. they even have matching plaid shirts! gah!! Okay, don’t focus on the shirts iwsod.. you can do it!]
Amanda: Ok, Carl Valentine’s tax return for 1981.
[Whooo great! While you are at it, why don’t you pull out Donald Trump’s? – sorry couldn’t resist 😉 ]
We see the read out..

… Francine’s coordinating a five year screening of surveillance films from the Soviet Embassy. Maybe we catch Mr. Valentine in another lie.
[this is hilarious, Lee if you had followed Valentine after your ‘interview’ you would have saved everyone a lot of work!]
Amanda: Yeah look it’s nearly 10 o clock, I gotta get to rehearsal.
(Amanda goes to get up, Lee grabs the script). Hmm he doesn’t want Amanda to go? 🙂
[Okay, I’ll say this once: They is grandpa pants he is wearing!!] 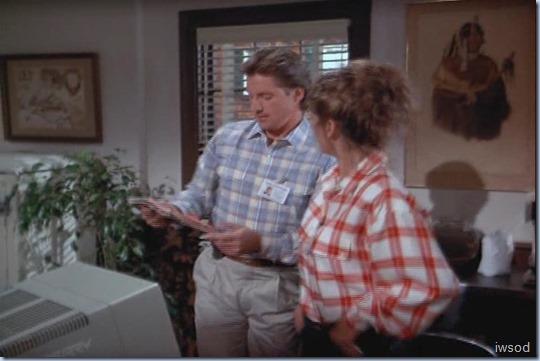 Lee:  You’re ah, really going to memorize these lines huh?
They move around in front of the desk
Amanda: I’ve already memorized most of them.

Lee: Oh yeah?…
(Lee flicks through the script and responds casually)
…What about Act II scene II, the chanteuse and the German soldier?

[You know, I sense a set up! Lee is so casual, and suggests this one particular scene? Why do I get the sense Lee prepared for this in advance?  And knows what the chanteuse and German solider got up to in the script and chose it on purpose?
I don’t know.. but it reminds me of the tag of A Lovely Little Affair, where Lee leads Amanda right into his trap

with his lesson on flirting (hiya toots!). She didn’t know what he was up to! Here? It has the same vibe to me! Will she catch up more quickly this time? ]
Amanda: Go ahead.
Lee: “You are the soul of decadence.”
[Decadence? I bet the Russian wrote that bit!]

rofl. Amanda starts in with the exaggerated acting!

Amanda: “Better than to be soulless!”

…to that hollow place inside”
[Oh my, we could have some fun with this dialogue – do you think it has a more personal meaning here?]
……gimme a break.

Amanda (deadpan): Don’t ad lib.
(louder and in character) …“Your opacity is transparent” 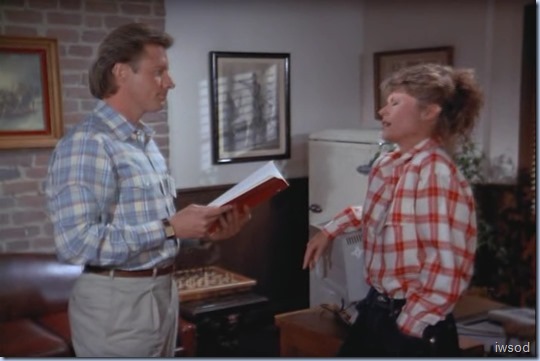 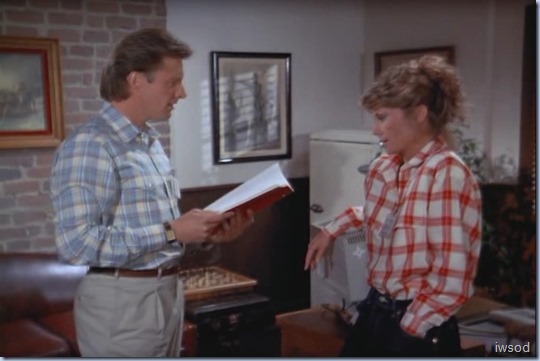 Amanda whispers: I’ll explain the subtext later. [rofl!!! Your lack of transparency is transparent? and there’s a  subtext to that?! ROFL this dialogue is hilarious!!! as is Lee’s confusion.. I’m with Lee ha haaaa.. Mon Dieu! ]

Lee: Uh huh.  “Perhaps that’s why I drink. Another! Maybe this one is the one to make me forget”.

(We see Lee have a little chuckle to himself over this dialogue. Amanda moves a little closer to Lee err the German soldier)
Cue the sultry music!
[Maybe Amanda is taking over this little set up! Emboldened by the role she is acting.. yes.. All the world’s a stage?!] 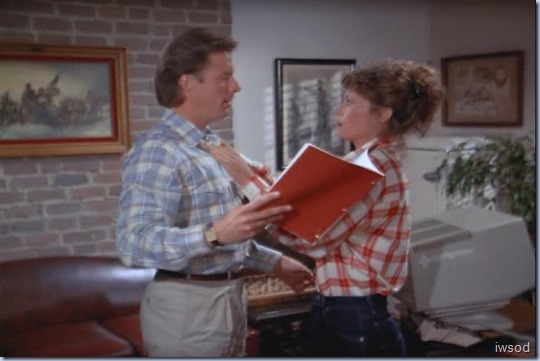 The chanteuse moves the script out of the way – and puts her hands on the German soldier’s chest.. 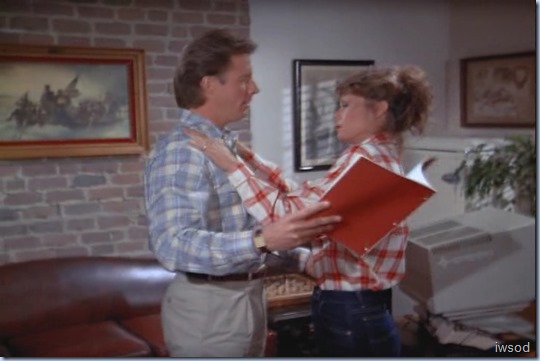 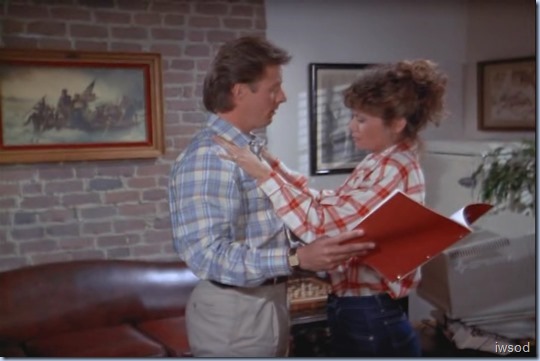 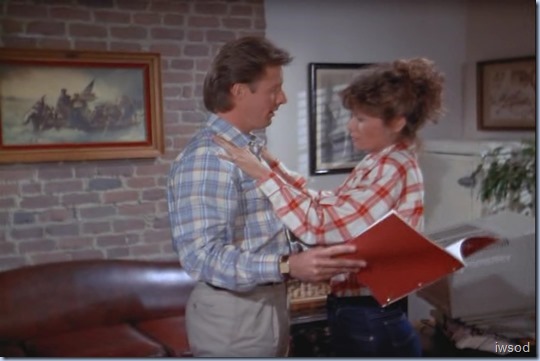 then responds by tossing the script. Wherever it doesn’t matter!) 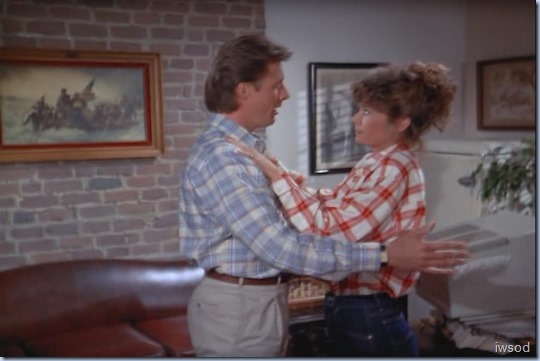 Lee whispers: I have another in mind…
(He puts his arm around her) 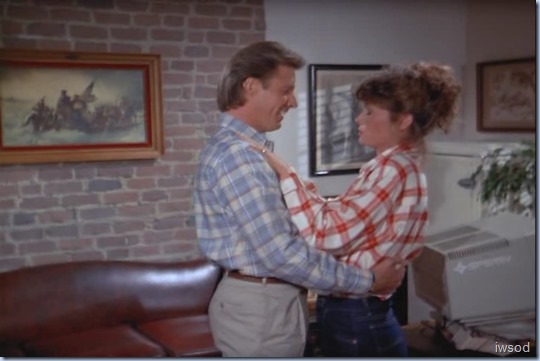 Lee: Who cares?
(Lee says this line in a playful German accent..

and they move in for a kiss) 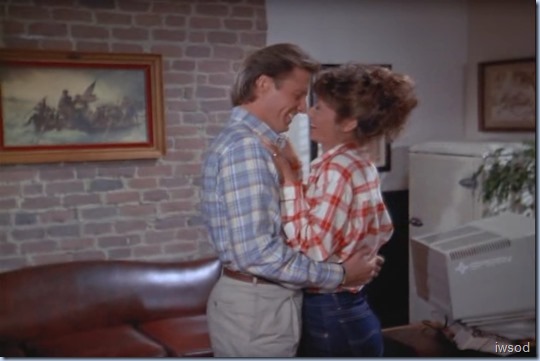 [Oh my gosh!!! Francine’s face is hilarious!!!! Especially when framed by those hilarious earrings!! ] We cut back to this: 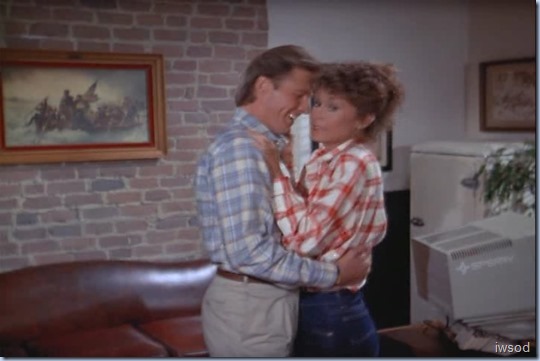 (Amanda notices the interruption first.)
[Their reactions are hilarious -remind anyone of the sour grapes tag?!]

[Love the little clenched fingers as if to say can’t touch! busted!! And the hands in the pockets- can’t touch!]

(Lee looks like he wants to shoot Francine! tee hee.. )
…We’ve got those embassy tapes ready for you, but I see you’ve got your hands full! 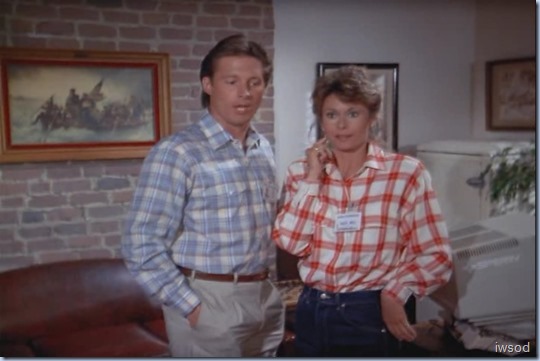 Francine: Oh, and when is opening night? 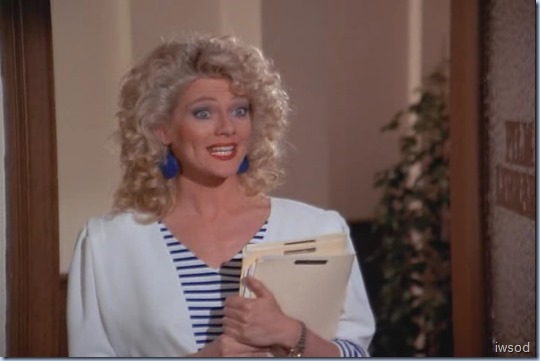 (We cut back to Lee and Amanda looking busted and with no comeback.)
[LOL Lee starts smiling, and then reverts to irritation at Francine. go away Francine! Lee why don’t you tell Francine to shut up and eat her Taco – worked on Petrovich!] 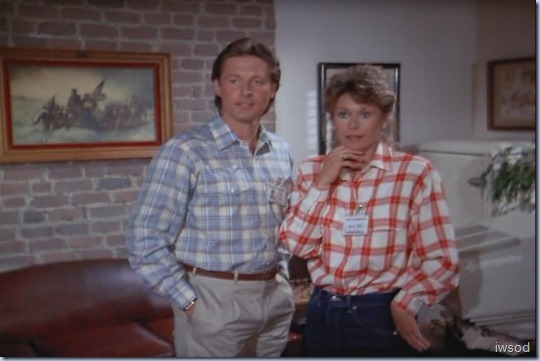 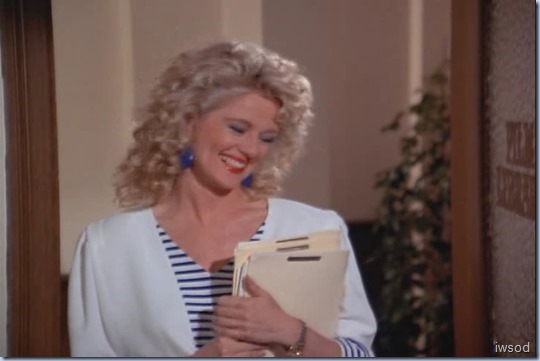 (Francine has a giggle to herself at how funny she is.)
[And hey, maybe at how funny Lee and Amanda’s faces are right now! haaaaa]

She pulls the door closed saying to herself: Joke…

The scene ends here.. with Lee and Amanda left rather stunned!!

You know I’m getting a bit ho hum with these near miss kisses.. I’m now assuming they won’t!

However, I think this little scene is fabulous (how about you?), and shows me that both Lee and Amanda are more than ready to take this next step! Lee set it up with the little role play (Just like it started in A Lovely Little Affair) and Amanda caught on quickly – played along perfectly.. stepping it up a notch with her flirty challenge about the wine really making it possible to forget! I love that Amanda never loses the accent – she’s aware of what she’s doing the whole time

Just what is Francine going to do with this little moment? Burn her eyeballs?! I’d say there’s going to be some strong rationalisation going on for her to make this right in her own mind! We can’t have Lee and Amanda being a romantic couple ever, in any sense of the term.

Well I cannot wait to hear what you all make of this big moment!!!!!  Anyone remember seeing this on TV and not knowing what would happen? do tell! Thanks for reading!!