8/21 Season Three, Episode 22: All the World’s a Stage–Scarecrow and Mrs King

Moving on, and still at IFF.. we see a bunch of monitors – this must be the Russian embassy tapes Lee mentioned.

Whooo is that congresswoman Faber approaching?! tee hee..
The images on the monitor flicker to other images.. 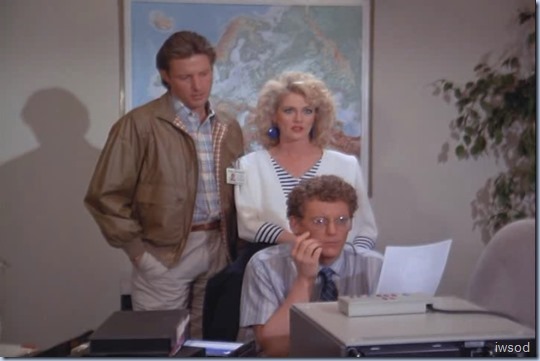 Francine: Ernie’s running August, September and October.
[Do we know what month it is now in the story? The script back in Russia was dated April 1986- seems a bit silly for Krusty comb over Krutiov to go to all this trouble, and then have Valentine come visit him at the embassy! You’d think he’d be more careful to keep Valentine’s connection with Russia a secret! And.. if he isn’t – then why the catch up in the park?!] 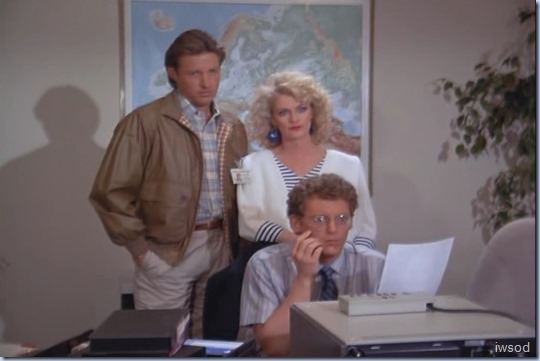 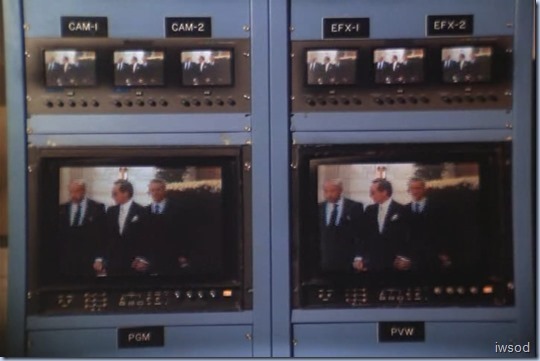 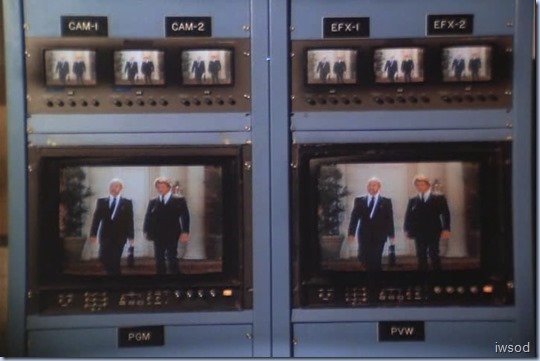 [Um didn’t you just see?! I guess this Ernie is suppose to be a genius who is super quick, but we the audience could identify who people were at that speed too.  (it’s not that fast if you have time to say ‘nope’ for every image!) I think Lee and Francine could have also. but okay okay.. I’ll go with it. this Ernie is a super fast human Google image search!]
Ernie stops, rewinds and pauses for Lee.

Lee: Carl Valentine. And look who he’s arm in arm with. Serge Krutiov. The puppet master’s right in our own backyard.
[Mon Dieu Mon Dieu] 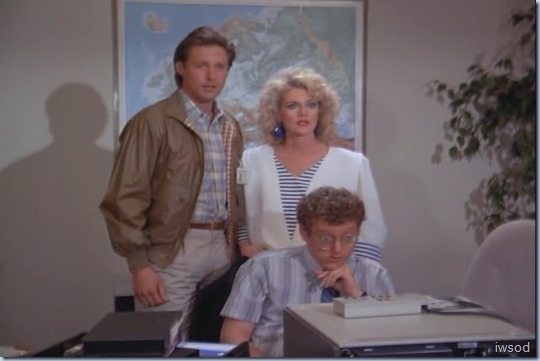 (Lee gives Ernie a couple of slaps on the arm and then motions to Francine to leave with him.)

[LOL he even grabs her by the arm to get her to leave quickly. A bit over the top.. but whatev..]
(We hear Ernie call after them)
Ernie. You’re right!
[How lovely.. a truly humble guy.]
We cut back to Ernie, happy to be left alone. He pulls out a VHS tape, puts it into his machine..
It’s Wile E. Coyote and the Road Runner! [Guess this is one advantage of being a Warner Bros tv show]

Ernie is seen grinning and enjoying.. Umm is Ernie eccentric? or maybe a sandwich short of a picnic? 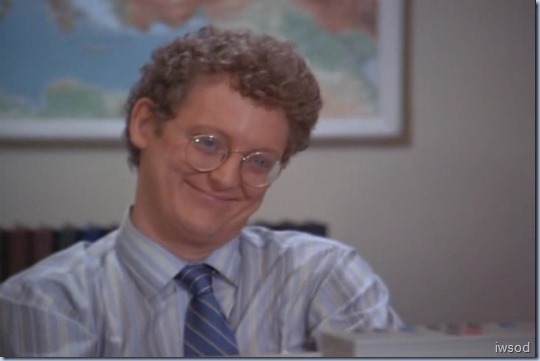 errr.. not sure what to make of it, but whatever he is: he has a unique talent that apparently IFF can use.. whatev.. What do you all make of Ernie? (and is the audio-visual system called ‘Bert’?)

Obedient Carl Valentine, in blue suit, walks along with his left hand in his pocket.

Noticing he has his left hand in his pocket, Valentine removes it, and we see Lee sneaking after him and coming out from the bushes (sticking close like a ten week tan

[and tan shoes. Gee when Lee said he would be like Valentine’s ten week tan, he wasn’t kidding!]
We see that Carl makes his way past the fountain where he met Krutiov earlier in the ep, and heads toward a limo parked on the street.

[LOL I did say earlier it was a shame Lee didn’t follow Valentine after his interview to this park. ha! maybe somewhere deep in my memory I had this in mind and just didn’t know it!]

Cue the ‘sneaky stuff is going on’ music.
Oh my.. Lee is lookin good in the great outdoors..plaid or not! 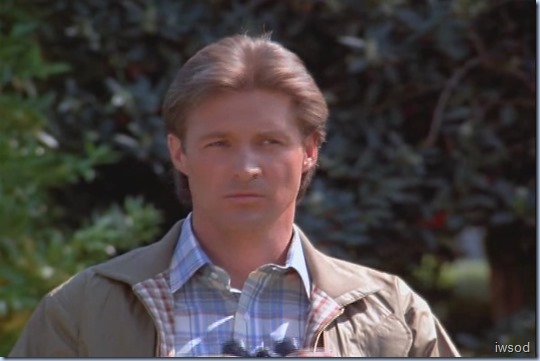 Mmmm this shot would be a lovely pic for the blog sidebar!
LOL, Lee stands in the middle of this park… 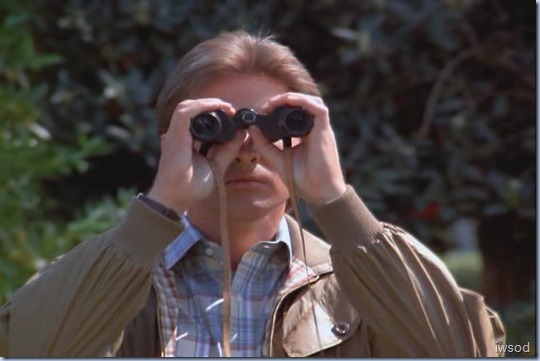 and watches Valentine approach the limo with his binoculars – smooth Lee. yep no one would notice you doing that!

Kruitiov lowers his window and Carl leans in.
Carl: The actors got the new scripts this morning. You know when Tony reads what you’ve written he’s going to come apart at the seams!

Krutiov: I’ve created a precise psychological equation. As a result, Mr. Martinet will agree to do something completely out of character.

Carl: But you said nobody would be hurt.

[Oh boo hoo. Valentine is one of those whimpy baddies who worries but goes along with the head baddies’ plans anyway. Wimp! Actually, really Krutiov has probably done to Valentine what he is now doing to Martinet- That’s how he got here.
Krutiov told him no one would get hurt, he got in a little deeper.. then he learned the truth – but he now seems too invested in whatever this is to pull out now. ]
Krutiov: Mr. Martinet has a special friend, a woman friend. We’ll manipulate him, and voila, he’ll manipulate her.

Carl: You’re awfully certain about yourself aren’t you? 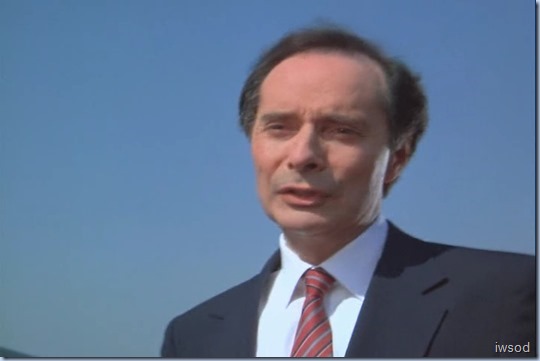 [Valentine has had the same tactic used on him? Hmmm or… lol then again, maybe this is totally in his character

]
Krutiov: Totally. So! When you get to the theatre, this is what you say to Mr. Martinet.

We don’t get to hear the script for Valentine and Martinet.. Instead, we cut back to Lee looking inconspicuous standing in the middle of the park with his binoculars.

Honestly, Lee you deserve to get busted!
The limo drives off. Valentine turns back but doesn’t seem to notice Lee. Instead he walks off.. and Mr ten week tan follows him.

Okay I’ll pause here for the moment! Would love to hear from ya!