17/21 Season Three, Episode 22: All the World’s a Stage–Scarecrow and Mrs King

Cut to the theatre in evening, the marquee sign for Parisian Intrigue. 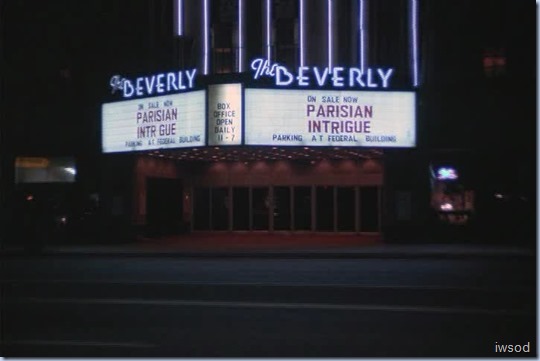 Dotty and the boys are in the audience, the rest of the audience are filling in behind them.
[Hooray. Great to see some more of the family! ]

[Where are Jamie’s glasses?!]
Phillip: Grandma, Mom’s not even in the first string.
Dotty: Honey , she’s an understudy, an understudy’s someone who takes over if the actor gets sick. It’s very important.

Jamie: This is going to be boring if someone doesn’t get sick. [rofl!]
Phillip: Yeah

(Dotty doesn’t reply. She just gives them a look.) 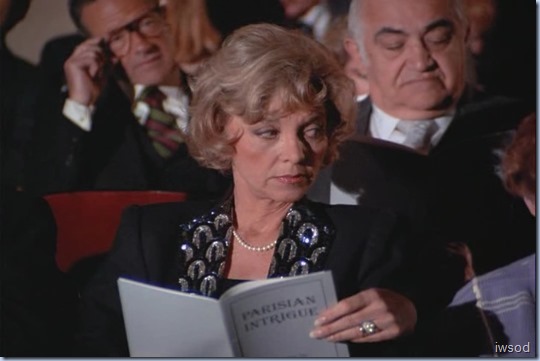 [Mon Dieu Mon Dieu! I think she’s inclined to agree with them.. so chooses to say nothing! What do you think?]
Elsewhere in the audience, we find Krutiov watching also..

He seems to be consulting his little black note book..
The lights dim and the play starts. 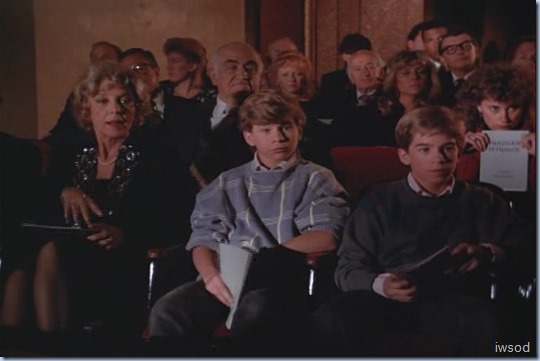 Oh rofl. Jamie’s words about it being boring are still ringing in our ears when we start to hear very loud snoring. rofl! For a second I thought it was someone in the audience- already! Then the curtains open.. and the set and cast are revealed..

The snoring is a soldier sitting there at the table. haaaaa.

[Guys if there is hidden meaning in all this parisian intrigue I’m going to need someone to point it out. I’m not really engaged with it… Hopefully someone will be!]

We then cut back to Billy’s office.
Maria Von Clausen is pacing. lol at the close up on her legs, me thinks the director kinda liked her

Lee: You could have said anything, Dr. Von Clausen. Blood analysis indicates that he gave you a powerful new psychotrophic that the Russians are calling the déjà vu drug. 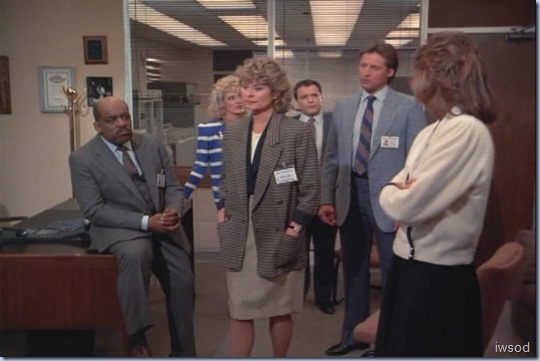 Speaking of psychotrophic – Aie… IFF doesn’t use drugs. They use stripes!!! Looooots and lots of stripes! everywhere! Stripes!

Sooo  looks like Lee and Amanda have done nothing all day after Ernie the Camera identified Maria Von Clausen- eh? Oh whatev..] 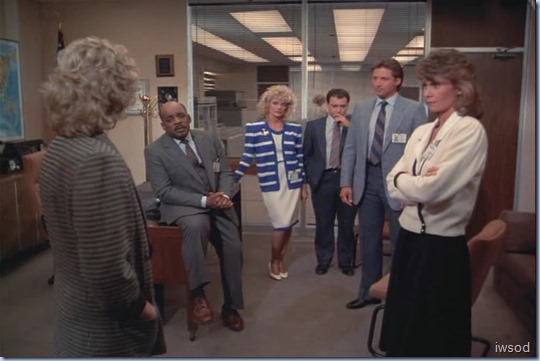 Maria: I can’t believe Tony would do this.
Amanda: He was probably pushed pretty hard.

[Ah I guess they are assuming this is the work of the brain bender himself.. the assumption seems to be Tony isn’t a bad guy – though how Amanda or IFF know this is anyone’s guess. Can’t Krutiov manipulate bad guys too? I guess Amanda could be defending Tony to comfort Maria to get through this.. ]
Lee: Which is Krutiov’s forte.

[And stripes are IFF’s forte! I’m going to nominate Francine’s shoulder pads here for the SMK world record for shoulder pads – okay the stripes make it look wider! lol but only Lee wearing football padding in Sudden Death has been wider! IMHO the reason why Francine was not in a rush to get out of her happy hooker number has been explained 😉 ha! ]
Walter: When I searched him, he was clean!

Lee: He could have hidden it anywhere. All you need is one thousandth of a grain of that stuff.

This photo above would be a good meme

[BTW- Lee and Amanda saw Martinet take the flower reservoir and pour the drug! They aren’t to know it wasn’t the psychotrophic drug and instead the put you out drug!]
Billy: Let’s presume we have a level 9 security breach. Sound the alert Francine…

(Francine nods and heads off to sound the alert)
…Lee, you and Amanda go out and round up Martinet and bring him in here… 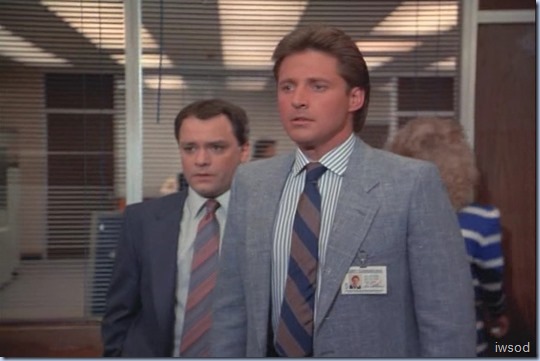 …I’ll work with Walter and get Dr. Von Clausen back under wraps. 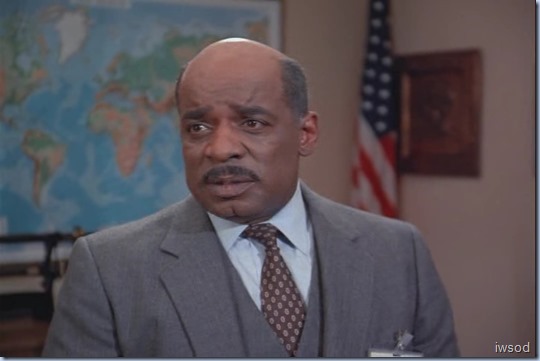 [Ah she looks so sad! Poor Maria, her work must be very important to her for her to put up with this kind of a life! Maybe Walter can comfort her

tee hee..]
Amanda walks closer to Maria,
[Love how the men close by look away to give them a moment!] 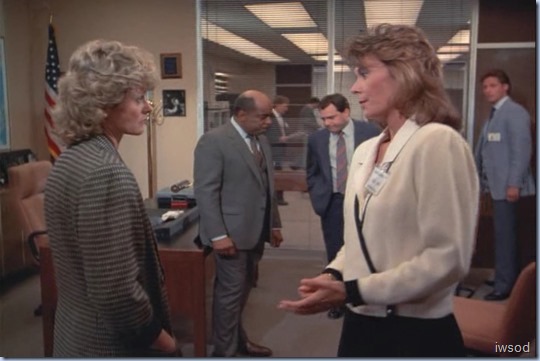 Amanda rubs her arm comfortingly
(softly) …He probably had no control over this, Maria.

Awh. So in character for Amanda to be sensitive to what Maria may be experiencing right now. This is not the first time Amanda has seen a woman betrayed by the man she loves – she’s hopefully improved on the way she supported Agnes

[I thought it wasn’t Amanda’s shining moment but I realise others may not agree about this.]
Maria doesn’t respond. [Personally, I think this is cold comfort! But appreciate Amanda trying! Do you think Tony had no control over this?]
Amanda leaves her to it, and heads off with Lee to find Tony.

Back to the theatre and that play!!

…And am I to take it you think all Germans are pigs?
[Gosh – let me guess.. German TV didn’t air this episode on TV?! or did you change the nationality maybe? Any German viewers able to share their experience?]
Man at the bar: Mon Dieu, mon Dieu

Soldier: Shut up, you fool!
(We see a wide shot of the audience.) 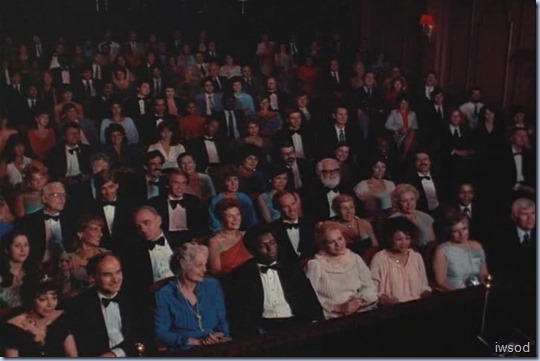 [Stock footage!! – they actually look amused! Judging by the size of some of those bow ties, I’m guessing 1970s

)
…Barkeep, another bottle of this swill.
Chanteuse: You’re corruption is complete! Schweinehund!..

(lady throws a drink in the soldier’s face)
…You may as well wear your Schnapps along with your shame!
(the on stage onlookers applaud, and we see one of the ladies turn the photo of Paris from upside down 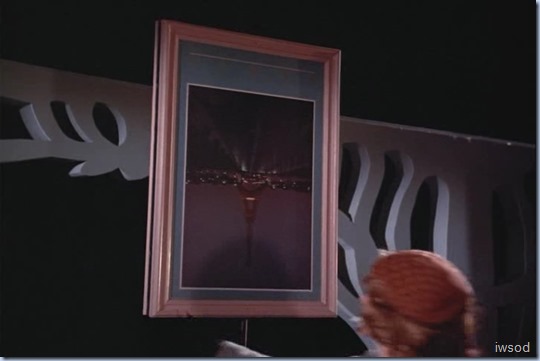 to right way up.)

[Wasn’t this the point where the Chanteuse was suppose to break a sugar glass bottle over his head?]
Man at bar: Mon Dieu, mon Dieu
Soldier (we hear in the background): Make him shut up about his God! His God. His God that kill that poor imbecile.

Barkeep on stage(in the background): Careful, Fritz. These customers of mine could happily slit your gullet and throw you in the cellar.
[Are we sure that Krutiov’s dialogue wasn’t better than this??!!! Mon Dieu! Mon Dieu!]

(Krutiov whispers something to the person next to him.)
[I guess this is Mischa the 2nd.]

Okay, I’m going to pause here for the moment. Is it just me or is the loud over the top dialogue in the background kind of annoying? Mon Dieu! Any thoughts you’d like to share before we continue?