Lee and Amanda rush down the IFF corridor. LOL they totally look like they are colluding about something!

Amanda: What did you just do?
[I thought they had a plan – did she seriously not know what he was doing? what was the instruction – distract him while I do something?! in the drug dispensary?! Okay okay, maybe he didn’t tell her because he didn’t want her to object. Better to beg for forgiveness than ask for permission and all that!]
Lee: Swiped a vial of promazepam.

[LOL Lee is so hyped, I suspect he may have already taken some

I looked to see if it’s for real. There’s a drug called Bromazepam.. seems that was maybe what they made this made up drug sound like? Or anyone find this drug? If it’s made up,  I bet it’s all the rage on made up Ile De Marine!]
Amanda reacts to hearing what drug he’s stolen..
Gah! 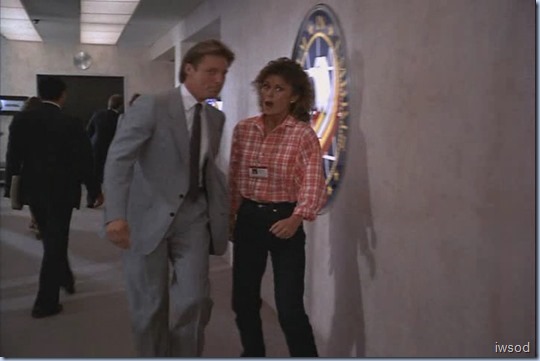 Amanda: Are you crazy? 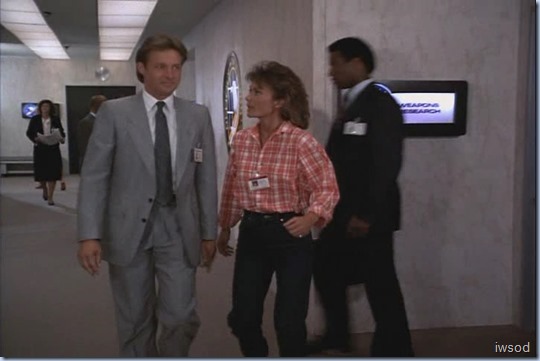 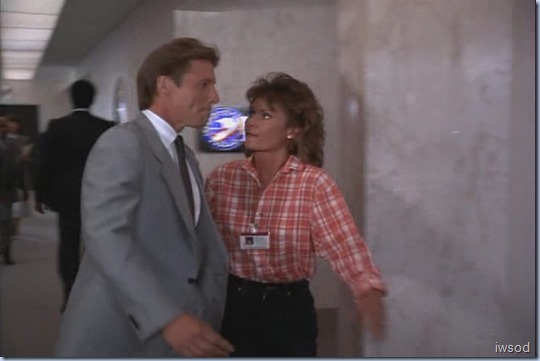 [I love the delivery here.. short, snappy and super fast – I think it’s got KJ written all over it.. great directing & acting KJ!

]
(they round the corner and arrive at the elevator)
…and it can turn your brain inside out like a wet paper bag.
[LOL Lee is all playful and excited here!]

[LOL what an awesome description! and love how Amanda knows all about this experimental drug! that’s quite some training she’s been undertaking! Just a short time ago, she didn’t know about Huck Finns err Mickey Finns!]
Lee: That’s why I need it. 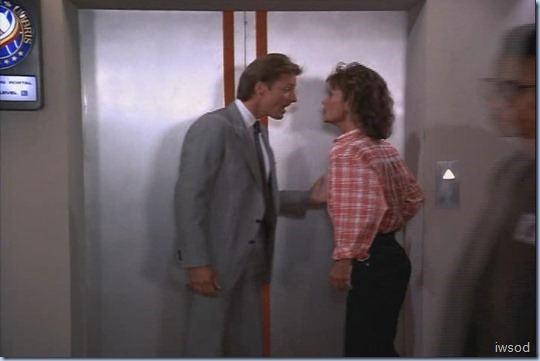 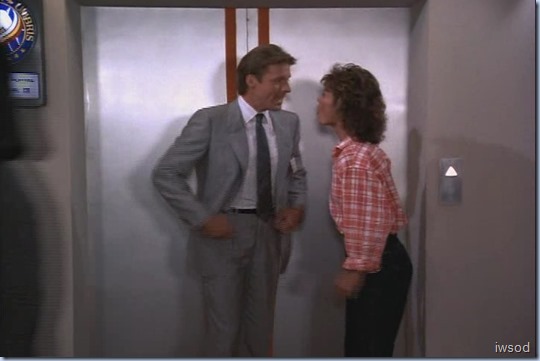 Lee: I’ve been trained to use it.
[Umm how can you be trained to use an experimental drug with unpredictable side-effects? Amanda was wrong – Lee is superman!!

[LOL Amanda’s all worked up, and now Lee is all calm. haaaa.. she’s fighting a losing battle here. Watching them fight is fun

[Awesome fast delivery here – hilarious!!! If smk had kept this up, I’m sure there would have been a season five!]
Lee: Who’s gonna know? 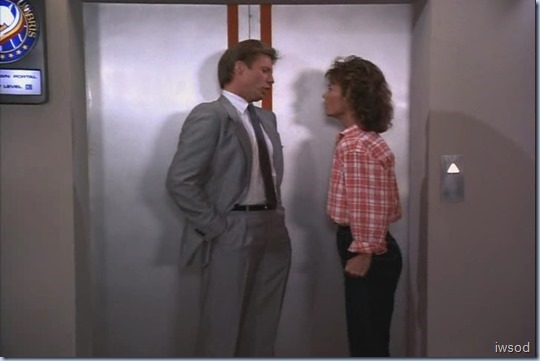 Billy comes round the corner as Amanda responds: That’s not the point. 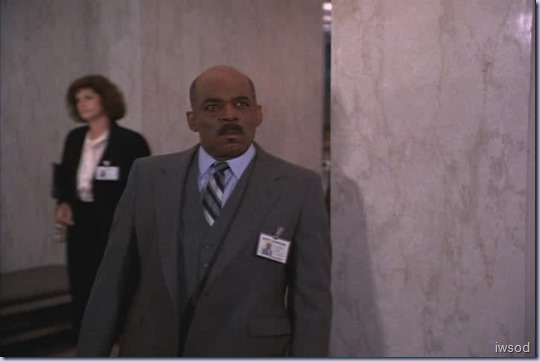 Billy yells interrupting them: Hold it right there.
Lee and Amanda are startled.. 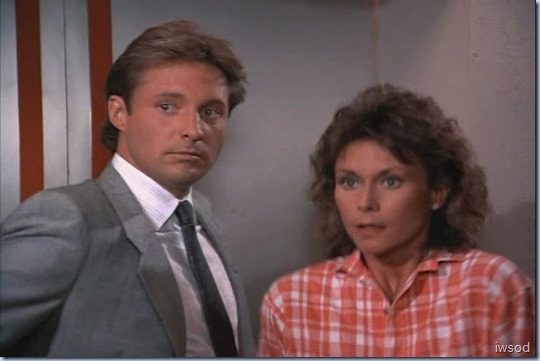 And try to collect themselves! 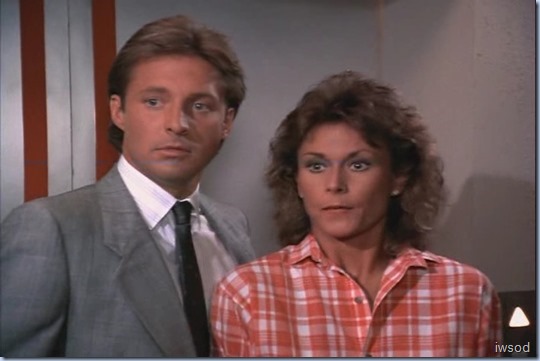 Billy: What were you doing at the dispensary? 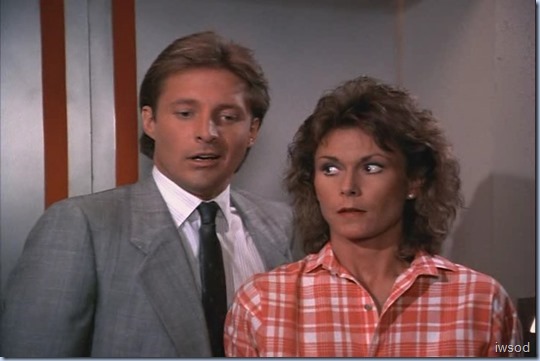 …I have a horrible headache, Sir, and I needed an aspirin.
[Has Amanda ever outright lied to Billy before?]
Lee: Oh yeah, she’s- yeah, a real lollapalooza. 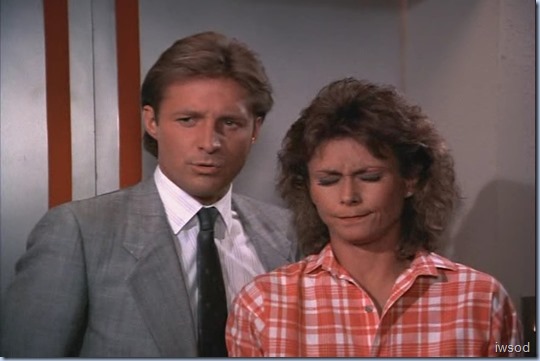 Billy: Well, you’re not by yourself. The talk on the street is that there’s a plot to assassinate Sinclair…

[Don’t worry Billy, this is smk – and whatever Lee and Amanda are doing is likely to be coincidentally linked to it anyway!] …Treasury’s getting antsy because they don’t like the idea of him staying at the Blackthorne estate… [Treasury? why would Treasury care? wouldn’t this be more of a State Department thing?
Hmmm.. Blackthorne.. Blackthorne.. the name sounds familiar.. Blackthorne..  Oh yeah, the guy that wrote that report that we saw in the CIA file of Lee’s mother 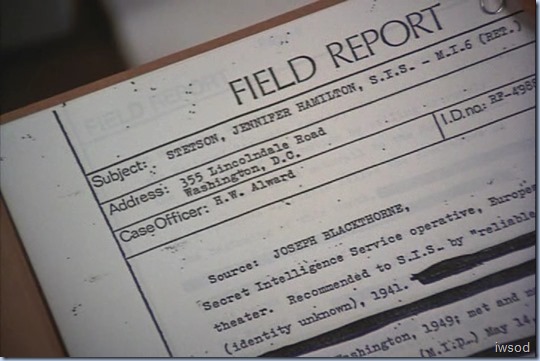 – ahem. I’ve concluded this was never suppose to be seen! But honestly, even without taking the still image – I could see the Source was Joseph Blackthorne! err AKA Thomas Blackthorne??!!! Aie.. now I have a real lollapalooza!!! ]

…So, I’m asking everybody, keep an ear to the ground. 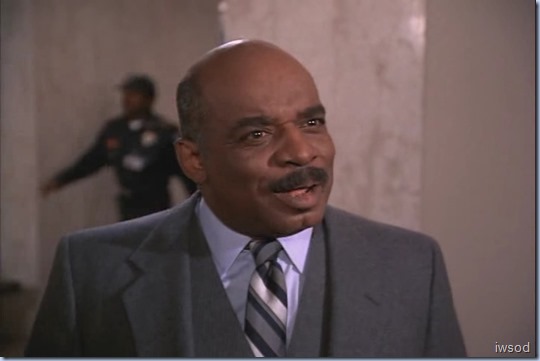 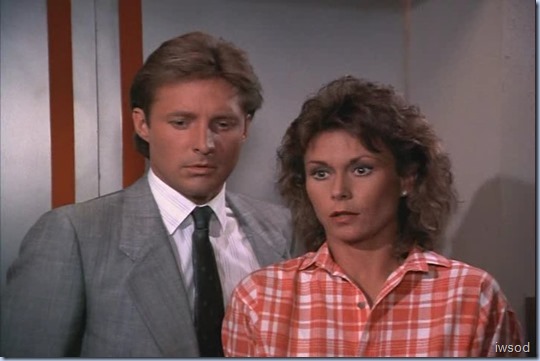 Lee: We’ll do it. [At least, Amanda will try with that awful awful headache of hers

]
Billy: Oh. An agent from Langley, McCrary’s the name, keeps calling you… 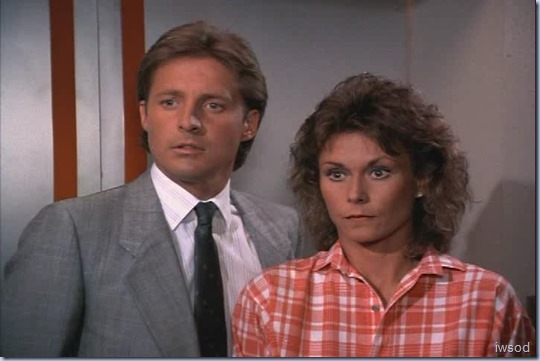 …Says he has to see you ASAP. [Thanks secretary Billy!

Lee: Hmmm.
Billy: Could you pick your messages up more than once a week?
Amanda: Yes, Sir.

They enter moving all those clothes. lol)
[Interesting that McCrary is CIA. Where the files came from.. I wonder if that was McCrary on the phone to Lee at the start of the episode, Lee requested the files, and then was putting off talking to McCrary until he had looked them over maybe? Who knows.. and at this point, I’m not sure I’m ever going to get answers..]

Lee and Amanda are next seen meeting McCrary – I guess at Langley..
Lee: What have you got for me? [Umm hello! He treats this McCrary rough!]
McCrary: You’re not gonna believe this one.
(McCrary hands Lee an envelope.. Lee opens it..]

Lee: Yeah, this is from my father’s file.

McCrary: I’d like to call your attention to the name at the top of the page; the source.

We see a close up on the document… 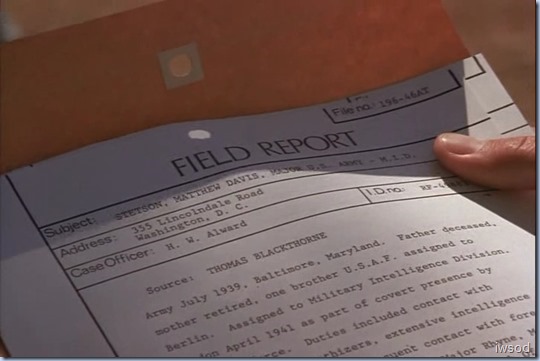 Phew.. At least Lee hasn’t been blasted back into his 80’s white polyester jacket again!!

Okay okay this is a massive dogs breakfast.. so we may as well have some fun with it! ]
Focus back in the smk present Iwsod!

[Whoa!!! My brain is being turned inside out like a wet paper bag!!!]

…Well, are we square? 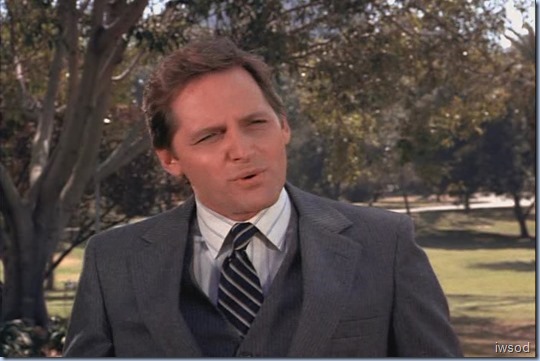 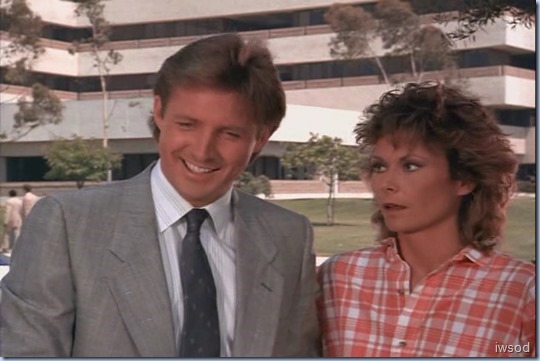 (They shake hands on it)

McCrary: Sure.
(McCrary leaves them to it.)
Lee: Thomas Blackthorne? 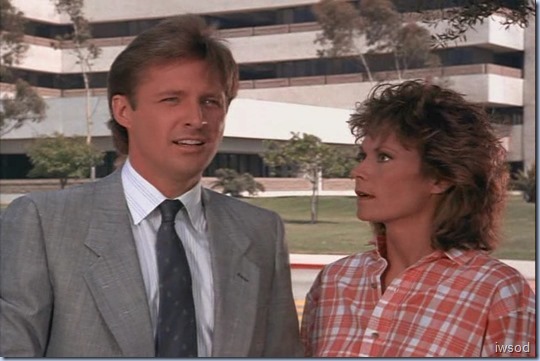 [I’m with you Lee.. I’m still trying to get my head around this massive clunker! 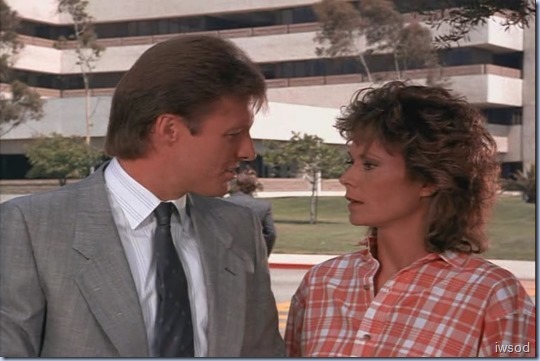 Lee: Why would he want to accuse my parents of treason?
[Hmm.. you were just blackmailing McCrary – is that a clue?!
We don’t know Lee!!! Maybe it’s because they were committing treason? Ummm he seems to be assuming here it was a false accusation? I thought he didn’t know? Maybe deep down he is wanting to believe they are goodies. Fair enough too!]

So it looks like McCrary got Lee a non-redacted version of the same report – and this was the big reveal.. the source name in the first scene should have been redacted. I’m just going to pretend it was!!! 🙂

We learned Lee has an uncle in the USAF – stationed in Berlin.. hmm interesting!! in A relative situation – err the general was the brother of Lee’s mother? maybe it was supposed to be his brother all along and he misspoke. maybe I can pretend he said he was the brother of the dad?! ]

LOL if you’ve all managed to look away from the flashing time warp… I’d suggest you all jump to the left, and then step to the right. With your hands on your hips, bring your knees in tight… and then.. share your thoughts on this part of the episode if you like!!!!