On to the next scene and Francine is in the Q bureau reviewing the list of corporations with the possible short hand.
Francine: “Blackthorne’s signature on petrol requisition not authorised…”

I’d recognise that zebra anywhere! this is Lee’s desk!

That zebra needs a name.. Shamba?! [since he was not shamba anyway? Shamgoba!!!!]

Francine: “Blackthorne positive link, at least 200,000. Gave Blackthorne copy of faked voucher and then advised he turn himself in…

…We will meet him tonight.” That’s it.
[Ohhhh so that’s what the blackmail was!! Blackthorne defrauded someone of $200,000- so he’s a greedy bad guy huh!]
Lee: What was the date of that last entry?
Francine: Uh, September 18th.
Lee: It’s the night they died. 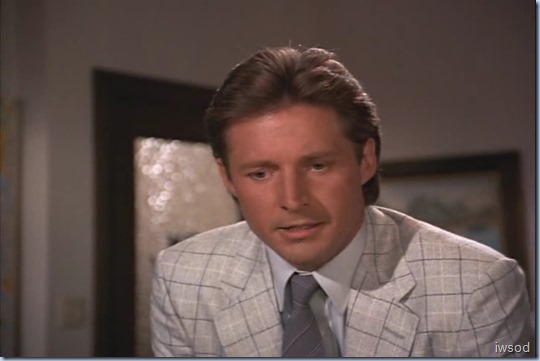 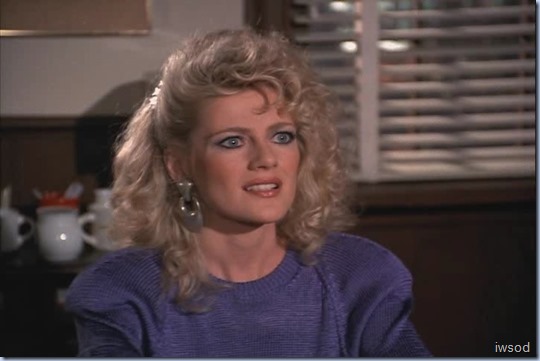 [Ummm is this exchange hinting that Francine knows this is linked to the death of Lee’s parents! Did Lee tell her? I guess she doesn’t have to know who the ‘they’ in ‘they died’ refers to but it’s very strange she doesn’t ask! Like it was strange Billy didn’t really ask questions… It’s like a scene has been deleted where Billy and Francine found out about Lee’s parents to me.]
Amanda: And then he took the money to an obscure little country, started a business empire and kept right on stealing. 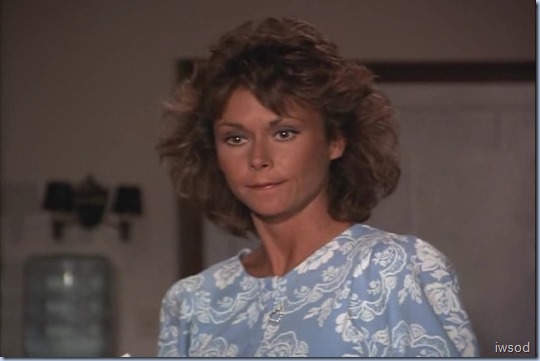 [And it still blows Amanda’s hair out- sideways! I love how Amanda is such a seasoned pro now about how bad people operate!]
Francine: That explains why he’s so friendly with Rene Sinclair.
Lee: Is he still in the country?
Francine: The International Communications Agency is throwing a luncheon at the Plaza in his honour at one o’clock and then he’s going straight from there to the airport.
[Is the ICA real?
I notice Francine hasn’t been assigned the role of coordinating the security at that hotel. whahahahaaa!!! How hilarious would it be if Francine shows up there and Van Kleef has moved on from the hotel Monroe to the Plaza..

He pushes his champagne fountain until he sees Francine – and then runs for the hills! It could have been a great running gag! Literally!
Oh well.. Good thing Francine knows exactly where Sinclair will be.]

Lee: Well, if we want to talk to him, we’d better get rolling.
[I wonder if the guy that stood Francine up earlier will be there!

So I guess any talk of Billy passing the case on to Francine and ordering obsessed Lee to take a few days off seems to be completely forgotten! What a non event that was! Feels to me like that was a contrived road block at a point in the plot to keep the suspense going.. ]

On to the Plaza hotel.

Uh oh.
We see someone assembling a rifle.. this can’t be good!

A shot of someone assembling a rifle, so he can shoot Sinclair…
We see the vette and a pale sedan pull up at the Plaza. 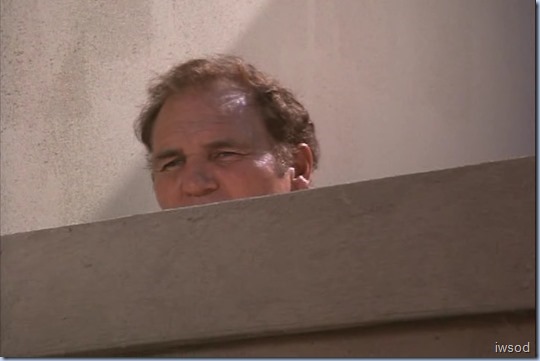 The assassin comes into view. Man he looks familiar! have we seen this guy before? anyone?
Lee and Amanda are down at the entrance. 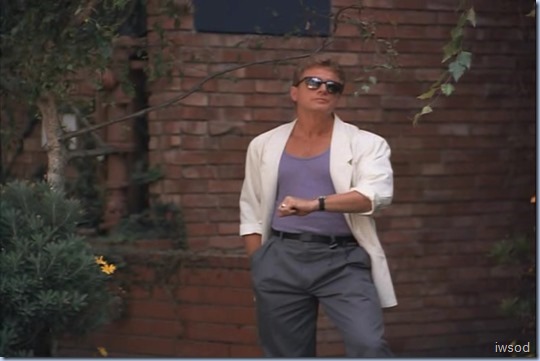 Landers checks his watch and then looks up at a building behind Lee.. waaaay up high. Lol! I’m surprised he doesn’t wave at the gunman

and give a big shout out!

Lee looks up at what Mr Don Johnson wannabee was looking at..

LOL gee it’s amazing anyone could see this gunman, he’s so well hidden! not.. rofl! 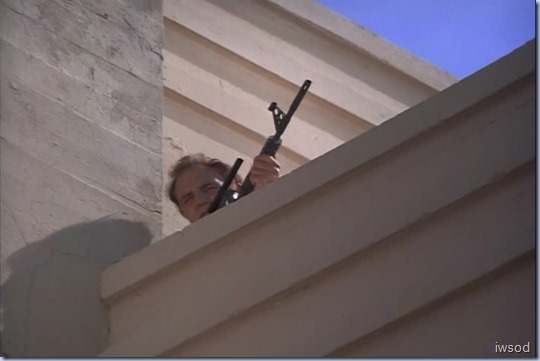 Francine joins Lee and Amanda.. they start walking toward the entrance. 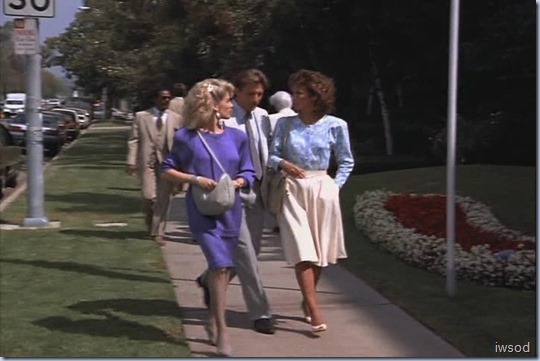 Lee: We’ve got trouble upstairs. Amanda, you go inside and make sure Sinclair stays put, huh?

[Squeeee!!! Not telling Amanda to stay in the car!

.. just stay with Sinclair!]
(Amanda heads in side to find Sinclair and leave the action to Lee and Francine) 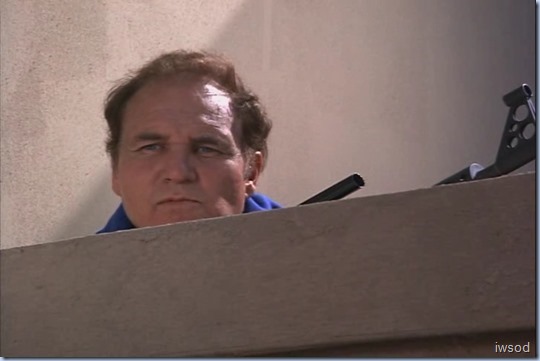 Aha! I randomly came across at least one place where I’ve seen this baddie before.
He was a guard at the Triton Club in Flight to Freedom!

Err at least.. I think it’s him!
[I was reading those old posts thinking about season 3 ep order – a totally random find!]
Lee casually approaches a secret service agent. [Who is clearly blind and part of some ridiculous effort to increase diversity in the secret service

Lee: We’ve got a shooter on the roof across the street. Don’t look. I don’t want to spook him…

[I love how Lee and Francine approach this secret service agent and don’t show any ID. I guess they can’t they’re being observed- but.. they expect this agent to just take their word for it and do what Lee says. whahahahaaha!!!! lol maybe the agent will think Lee is a prankster!

Maybe he knows him?…]
…Francine, check out Don Johnson over there, will ya? [Oh rofl!!!! Learjet did you know this dialogue was coming when you wrote that?! I love it!!!]
Francine: Bag him?

Lee: Quietly. You know what to do. [Go Francine!

]
[LOL Secret Service guy gives Lee a nod. He do what Lee say! good secret service agent!]
Assassin on the roof, waiting and watching.
He checks his watch which reads just after 12:20.

He rushes to disassemble the rifle.

He sticks it in his black bag and turns to leave. [Ummm why? me confused. I thought Sinclair was already in the building, was giving a speech at 1pm. so why at 1220 would the gunman be leaving? Has he noticed they are on to him? did I miss that? maybe that’s it..]
Surprise! 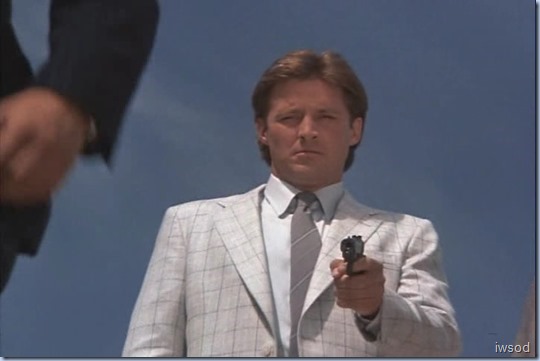 The secret service agents move in to cuff him..

Time for a Wayne’s World dissolve!!
And Lee begins to remember something.. 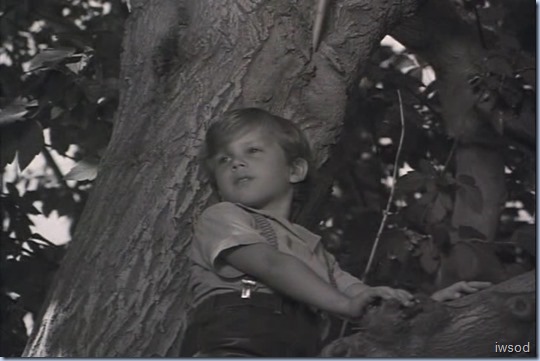 Little Lee is up that tree out the front of his place. [Ain’t he a cutie!]

He watches a man walk down the pathway from the front door towards the gate in the white picket fence toward a black sedan.. 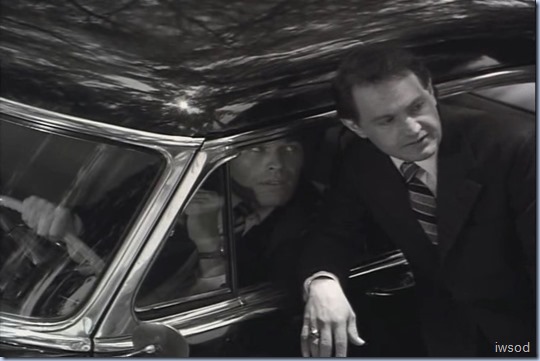 Driver: Well, do they know?
Blackthorne: They know. They’ve got something to show me but not here, there’s a kid. It’s gonna happen tonight.

Little Lee heard the conversation.
[Why would you tell Blackthorne you’ve got something that will damage him and give him time to make preparations?
Me thinks Lee’s parents were a little unprepared, maybe they underestimated how ruthless Blackthorne could be- i.e. he’s greedy, not dangerous. (Clearly they hadn’t seen how he decorates!!!) ]

We cut back to Lee and his memory comes to an end. 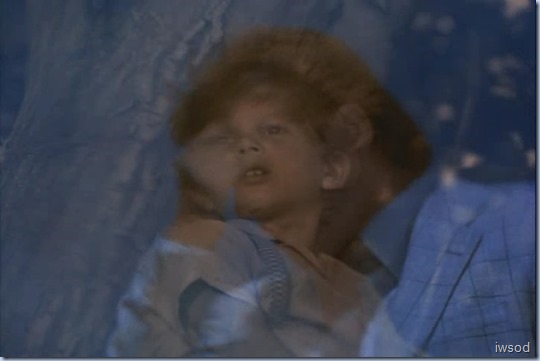 Judging by this expression – 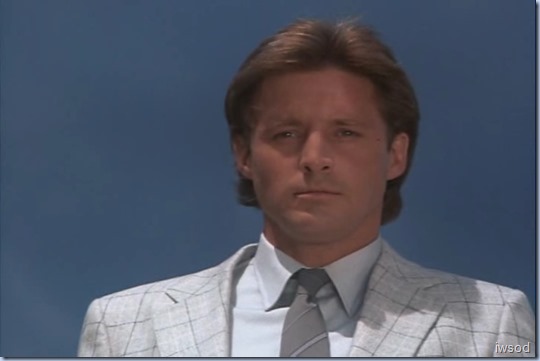 [And hey Lee, did you know he was the source of those CIA reports?! tee hee 😉 ]

Back down at street level, Amanda waits for Lee by the car. She sees Francine, dragging “Don Johnson” (Landers) with her, holding a gun to his side.

Francine: Next time I won’t ask you so nicely.

LOL! Landers seems to be limping

I better pause here… Anything you’d like to share y’all? Hope you are all doin smky great!