6/21 Season Four, Episode One: Stemwinder I

Moving on and it’s night time.
We see a suburban street we don’t recognise – but a car we all do: the vette!

Next, we see Amanda crouched down in I guess the vette, listening to some soft music from her headphones. Huh? maybe not.. what is she listening to?

[looks like maybe Amanda is recording as well?]
Uh oh. We cut to where this soft music is coming from and.. what else Amanda is listening to! We see candles! gah!!! we all know what that’s smk code for!!! Hanky panky! And a single red rose? whoooo that’s serious hanky panky!

Uh oh.. I think I’m going to be sick!
Thank goodness Amanda didn’t have to watch AND listen!
Sonja pulls herself out of their errr embrace (gag).  At least they spared us a close up!

Lee: What’s the matter? [What a first line. Lee is asking us in the audience what’s the matter right?! because this is seriously awful to watch!]
Sonja: Mmm… nothing…  Everything…
(We cut to Amanda)

… I’m very nearly eating you alive. [ewww Sonja is quite insightful! Sonja= the flesh eating Russian bacteria resulting in necrosis, deformity and death (of my eyeballs)]

(We see Amanda react to this.)

[She’s such a trooper! I hope Lee has some strong antibiotics he can use!]
Amanda: Oh, damn it.
[Poor Amanda! this really can’t be easy!!]
(We cut back to a close up of the two of them kissing. Ugh I spoke to soon about close ups! Ohhhh look at the pretty drapes.. and errr the pretty cushions! ahem.. ) 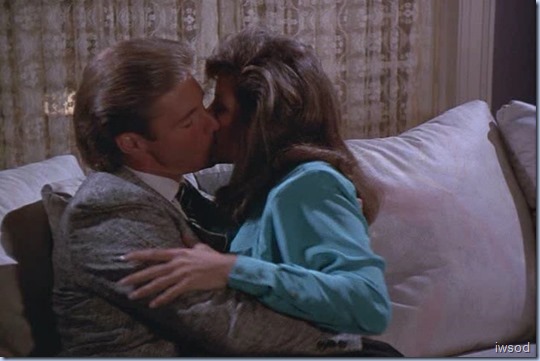 [Drat. A close up of Sonja eating Lee alive.
‘Oh damn it’ is right!]
(Sonja pulls away again)
Lee: Wait. If it’s what we both want, what’s wrong with it?

(She pulls away and moves off the sofa)
[What is that top she is wearing?! Bit like Leslie wore no? Massive shoulder pads!]
Sonja: It’s not that simple for us.

Lee gets up and walks around the room.. 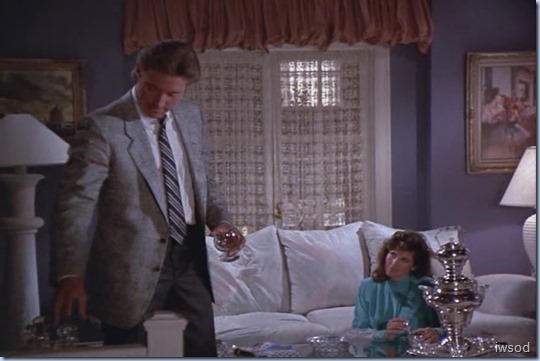 Lee: Sonja… uh…  For people like us, every day is… complicated. It comes with the territory…

(Lee pours himself a drink)
…Besides, as good as it is… I haven’t spent six nights in a row over here for the food.
[Six nights???!!!!!!! Six??!!!!! Lee you need some antibiotics stat! Thank goodness we were spared from watching that! But.. Amanda has been in the car like that for six nights in a row?! Nooooooo!!!!! When Lee says it comes with the territory- I wonder if that is a message meant for Amanda also – as he knows she is listening.. and this is tough!
Anyone else at this point thinking- dang. Couldn’t Lee accidentally leave his briefcase with the radio frequencies in it unguarded while he uses the men’s room?! enough already!]

Sonja: I haven’t had you over six nights in a row so I’d have an excuse to cook, either…

…I’ll tell you a secret. I bought it all, anyway…

(We cut back to Amanda)
[LOL I’m guessing she’s thinking – ha! she probably can’t cook! I would have cooked! 😉 ] 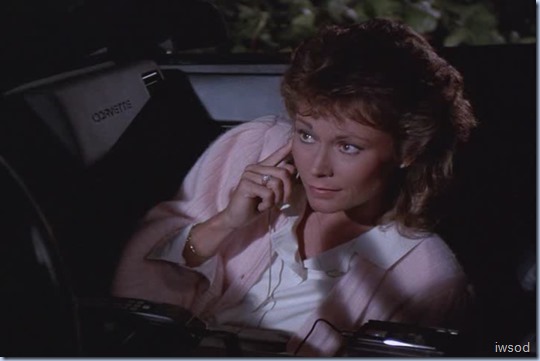 ….Once I discovered America’s greatest treasure:

[Thank goodness she didn’t say America’s greatest treasure was this hunk of spunk she’s been ‘cooking’ for!]

Lee: Then what can possibly be wrong, huh?
(Sonja gets up and joins him.)
Sonja: It’s my superior. His name is Rostov. I don’t know, he… dislikes me…

(Shot cuts to a close-up of Sonja’s right hand; she’s flipping a gold-colored coin back and forth across her fingers)

[KC notes-  as Alexi did in Scene 2.
Iwsod notes- only this time we cut to a close up so it’s done with much more skill by someone probably other than this actress!]
… aggressive… a woman? Uh, who knows why? But he’s threatening to send me back to Russia.
[All this seems pretty obvious – The approach, identifying herself as a Russian with her freezing vodka drink, it seems too obvious that she is wanting information before Lee even had a chance to ‘fall’ for her. but maybe it’s just me. I guess her charms were suppose to be powerful enough that Lee would desert his country to get some. Ugh! ]
Lee: What?

Sonja: To convince him that I’m worthy of staying, I need something… substantial.

Lee: Listen, I don’t wanna lose you. Maybe I can help.

[rofl! Is it just me or was that really really easy??!!!]
Sonja: You mentioned Stemwinder…
[Ohhh he did did he?!] 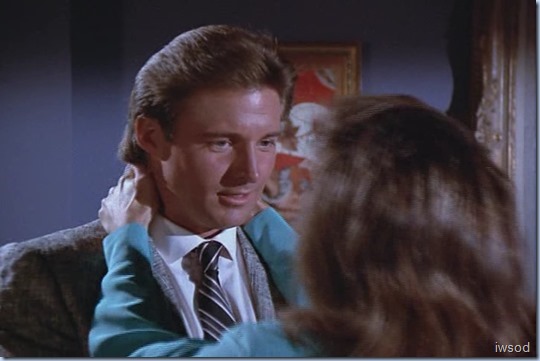 Sonja: I’d be a hero.  Then Rostov would have to let me stay.
Lee: I can get access to Stemwinder’s radio frequencies.  Front row… center seats.

(Lee ups the tenderness here.)
[Gag. You know this Lee Stetson is awfully good at acting like he really is into someone!!]
Sonja: You’d do that for me?
Lee: Yeah.

(We cut back to Amanda)
[I think she’s about to scramble for her sick bag!]

Sonja: Can you get it by tomorrow? I mean, I know that’s fast.
Lee: Don’t you worry; I can get them.
[Yep! It was very fast!!! and IMHO way too easy to get Lee to betray his country – six cooked dinners is the price huh?! lol..
this is all so easy. Seems Sonja knows this was what Lee was wanting to do all along, and it’s all some elaborate way for information to be passed without saying so- she’s doing to him what he’s supposed to be doing to her. but.. I’m not sure what this all has to do with Alexi. Still have that game within a game going on that I don’t understand yet!]
Sonja: And then we can mix business with pleasure.

[Uh oh… the hanky panky starts up again. Looks like the mixing is already well underway! Please, no more mixing business with pseudo pleasure! Noooooo!
Iwsod refuses to publish another flippin photo of this Russian Bacteria eating Lee alive!]
but.. poor Amanda has to listen to the kissy kissy noises. ew..
Amanda (very flat): This is a real drag.

Oh Amanda.. I’m right there with you!!!! [Anyone else?]
Amanda is a very strong woman! I’d be in tears I think! Or I’d be off my food for a week!
I wonder if Alexi or Rostov is listening to this whole evening also? separately of course.. Maybe they both are! It’s the hottest ticket in town! 😉

Ohhhh I cannot wait to hear what you all think!!!

I can see that this is part of the spy biz, Lee is playing a role, it means nothing.. but why the heck does Amanda have to be the one to have to listen to it?!!!! Personally, I think it’s asking too much!! 😉  How is Amanda going to cope with this?????!!!!

What’s the plan once Lee has handed over the information? Is he suppose to continue to be an asset for this Russian spy? If he just broke it off wouldn’t that lead the Russians to suspect he had just been stringing them along to hand over info without making it look like he was handing over info they wanted to?

I’ll pause here to give us all a chance for our anti-nausea strategies to kick in.. Anyone feel strong enough yet to share their thoughts? 🙂