Something magical has happened to the IFF exterior.. remember at the beginning of the episode:

Now we have this:

Aha! Lee’s vette is back.. we find it parked out the front of the agency. hurray!! but.. what’s going on with the magical leaves?? is this showing the changing of the seasons?? We had winter exteriors for Spiderweb all the way through that ep…  I am guessing they screwed up and edited in the wrong exterior.. [the last post had a few moments I thought were been edited wrongly also] … Hmmm..maybe they had to substitute this one with Ms Walker in it because the winter ones all had the vette in it?And the episode started with the vette out of action? Hmm that might be it..

We find Lee in Billy’s office, giving Billy a run down on his uncle’s situation.. pilot error nine times in one month? Lee doesn’t buy it – me neither! and frankly – who would?? Only in smk world-when the plot dictates!!!

I don’t even get why the baddies would use the baddie device (which we haven’t seen yet) to kill 9 pilots – why five different accidents? Why such ‘overkill’??!!!! It would only raise suspicions no?? Hmm maybe this will get answered later- I’ll keep my ears open. I don’t remember.. 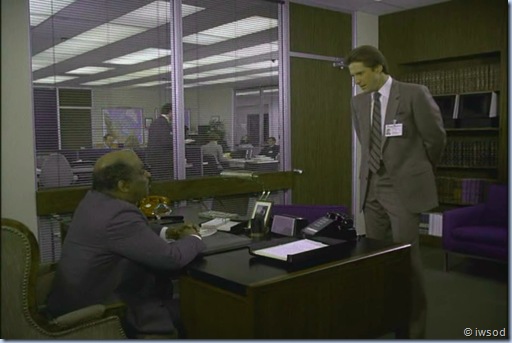 Lee has checked out all the ‘accidents’; all the flight patterns were routine, except for the Colonel’s.. Go Lee! He is good at his job!

but I struggle to understand 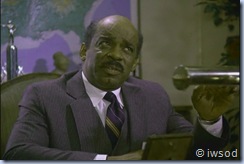 why the military is being so dumb about it! When they are not dumb! [I guess the wool is being pulled over their eyes by some baddies..] Billy asks Lee if it’s possible the Colonel’s manouvre was dangerous.

Lee responds: Nobody knows better than I that the Colonel has his faults [ain’t that the truth!] the one thing I can tell ya: he is a damn good commanding officer. If he says the manoeuvre is safe, it was safe. Believe me. 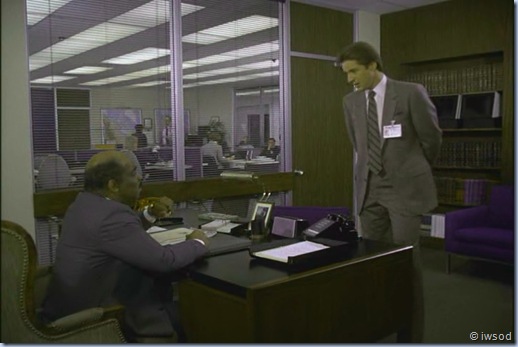 LOL.. there goes Lee complimenting the Colonel behind his back!!! the nerve of him!!!

Billy: you’ve got a great deal of respect for him don’t you.

Lee: as a military man? yeah you bet I do. 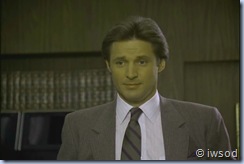 His only sin is that he’s an innovator in a profession that doesn’t accept change easily, he’s a maverick.… 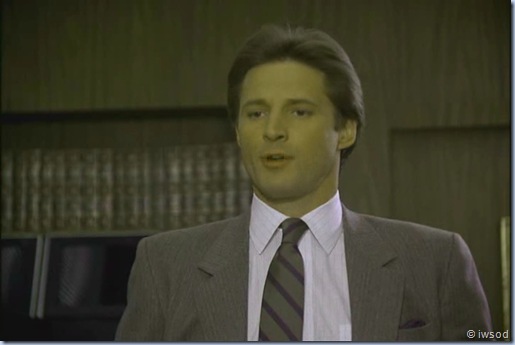 .. Believe me it’s cost him alot of promotions..
Lee stops there as Francine knocks and enters Billy’s office.. Hmm this is interesting huh! I think Lee is saying he doesn’t respect him much for his parenting skills.. and at the same time though, he can see his uncle is not all bad – and there are some things he does well-which Lee can respect. It’s not so black and white..

Most interesting to me though is – I wonder if Lee’s description couldn’t also apply to Lee and the spy biz? Mr ‘ his methods are a little unorthodox but he gets the job done’ ??? I’m just saying.. Lee doesn’t realise it, but this man who raised him may have passed on this trait to his nephew.. it certainly sounds like he taught Lee to be independent!

Francine’s got the evidence we need to know- so we can be sure Ballard didn’t commit suicide.. LOL.. it is just me or is it often Francine’s role to come in and deliver doozies that are totally coincidental or ridiculously advantageous? hmm.. this might explain her over the top fashion choices: let’s distract the viewer!! LOL!!

I find all this  a bit of a stretch! scratches? type O blood?? I didn’t see the baddie bleeding.. a tad convenient (no wait.. this is smk- it’s a lucky coincidence!) – the honeymoon in Hawaii was enough to convince me!! 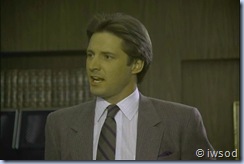 The Police are investigating.. but you know how it is in SMK land.. they can’t possibly investigate half as well as Lee can! Soooo Billy puts Lee on the case.. [ahem..  yes no conflict of interest there!]

Lee reminds us the Colonel is stashed over at Amanda’s.. and he has a favour to ask of Francine!

Lee: Francine could you take a look after ahhh [BB seems to flub his line here] Prince Russad’s reception this afternoon? 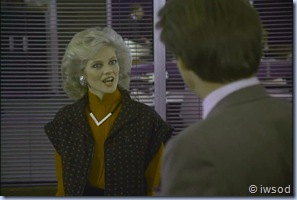 Francine here is hilarious!!! all I can say is: Bring on Life of the Party! man.. that episode is sooo funny!!!

Love Billy’s delivery of his response to Francine’s fawning!!! Billy looks at Lee and responds: I think that was a yes.. 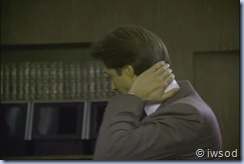 says ‘yeah’ and just leaves – he really isn’t interested in bantering with Francine- he’s preoccupied with his Uncle- awh!!

BTW- just who designed that outfit Francine??? The Aliens from ‘V’??!! This is their uniform isn’t it?

It may be in many episodes.. but when I took the pic of the sour grapes chef- I noticed that Francine is wearing her ‘V’ necklace in that episode!! Maybe Francine has infiltrated the agency? Do V aliens like Valrhona chocolate?? after all.. it starts with V!!!

On to the Armed forces Club.. The col. it seems is not stashed away at Amanda’s… Uh oh!!! He’s catching up with his sage (not) friend who advised him to represent himself in his own court-martial.. this guy is a baddie right? LOL.. sorry I can’t pretend otherwise! 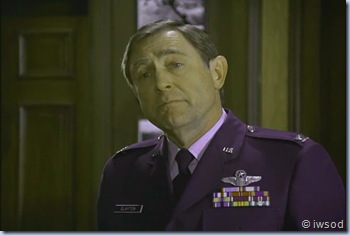 Col. Clayton: -and like Lee says- pilots that good don’t make mistakes Ted.  [certainly not nine of them!!!] 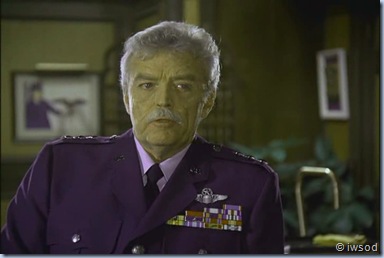 Ted. Patterson: He’s got a point.
Col. Clayton: Damn right he has.

Ohhh boy.. so the col. is up to that nasty trick of complimenting people behind their backs too?? geee. Are Lee and the Colonel alike or what!!!

It’s kinda cute!!
Ted: Can you tie in those crashes out west with your squadron going down?
[Ie. Just how much do you have on me???!!!!]
Col. Clayton: Lee’s working on that connection right now.
[Thanks for the tip.. looks like the baddies will need to deal with Lee! ]Ted gives the compulsory encouraging talk here.. gag! Funny, he says encouraging words- but the look on his face is not encouraging!

Col. Clayton: I lost five of the finest pilots in the military. If someone else is responsible for their deaths I’m gonna see him hang.

[whoooo that sounded like something Lee would say! only he’d say he’ll see the scumbag hang or something!

I like that the Colonel is not only concerned for clearing his own name- in fact he is much more concerned with the deaths of his men and finding justice.. good for him!]

His buddy Ted drinks to the Colonel’s declaration.. You nasty piece of work! You just wait Ted!

Ted reminds ‘Bob’ (lol!) that the orders are hands off for Ted to get involved- he wants to help, but he can’t! 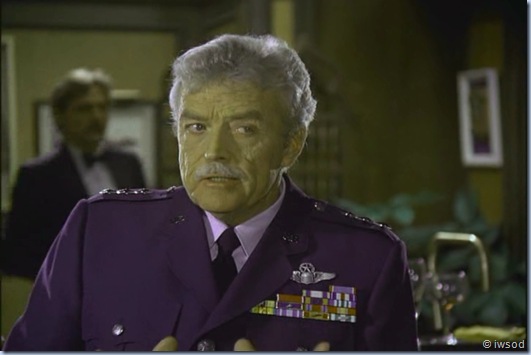 The Colonel seems to accept this is perfectly reasonable..

This is Interesting! Compare this to how Lee behaves when someone he cares about needs help – orders or no orders Lee does what he’s got to do to help them!!!! I wonder if the Colonel would behave the same way? Being a ‘maverick’ I don’t know- but it seems he has no expectation his best bud in the military will disobey orders to help his friend!

Ohhh gag.. Ted is just full of compliments! he tells the Colonel he’s “a hell of an officer..”

Col: that means a lot coming from you Ted.

Whoa.. this exchange makes me want to punch Ted! He’ll get his! Poor Colonel! Here is one person complimenting him to his face: and he’s trying to ruin his life behind his back!!!!

Lt. Mauntel is giving the Colonel a ride to Amanda’s..
Col: My nephew it seems fears for my safety. He’s stashing me for the day at a friend’s.

[Hmm I don’t think the Colonel understands the concept of being ‘stashed away’ maybe someone should explain that means no one knows where and you don’t tell!!!! tee heee.. poor colonel!]
Ted: sounds like a smart Kid.

[ugh.. enough with the empty compliments! It’s like the General is thinking: the nephew’s smart..the uncle? not so much!!

]
Col: he’s learning!!! [ Oh my!!!! Look forward to hearing your thoughts on this scene guys!! ]
Oh this is laden with irony.. as the colonel leaves, Ted says: let me know what you find out!
Col replies: you’ll be the first.

[lol.. he is the first! he’s way ahead of you already Colonel!]
The scene ends with a close up on the thoughtful friend of the Col..

Can’t wait to see him hang!

[Do Generals not have to wear name tags??? Why does the Colonel and not the General??]
Anyway, the lovely kitchen scene at Amanda’s is next…. so I shall finish up here for now!!

Any questions? Any ideas?? did you suspect the General the first time you saw this? I don’t remember! drat.. I wish I did!!! well bye for now!