12/21 Season Four, Episode One: Stemwinder I

Things are getting serious! Brace yourselves again! Billy, having just got off the phone from talking to Amanda, is joined by Francine out in Dart’s hallway.

Francine: Billy… Dart wasn’t expected home, so his body wasn’t found until Stemwinder countdown began…
[Okey Dokey.. dead body wheeled by was Dart. Uh oh uh oh uh oh!!!!
I thought stemwinder was the operation to leak the radio frequencies. Not the name of the war games that everyone was assuming would be a success! Did anyone else get confused by this?!]

…I just talked to the medical examiner; he said his neck was broken, probably late yesterday afternoon. Lee and Amanda were the last ones on the log to see him alive.
Billy: What about the Stemwinder frequencies?
Francine: Well, they’re still in the safe—but they could’ve been photographed.
Billy: Or not!

[Hmm Francine seems pretty open to their guilt! I’m curious to see if Francine will side with Lee and Amanda and help and protect them (from the agency I guess)– she’s never actually done that-or has she? help? And.. has Billy ever done that?]
Francine: We found two different sets of prints on the safe; we’re running them, but, uh… would you care to hazard a guess?

[Wow. I might be getting the answer to my question pretty quickly here!
I kinda hate Francine right now! I get that she’s an agent and needs to be objective etc.. but this is less like objective and more like – I’m not fooled by Lee! ugh!]
Billy: Francine, would you stop with the looks!..

…I put my money on Lee and Amanda. They can explain! [oh bless him!!! Go Billy!]

Francine: Maybe, [Maybe?!] but you are going to call off Stemwinder, aren’t you?
Billy: You give me too much credit… [and Lee and Amanda not enough!] 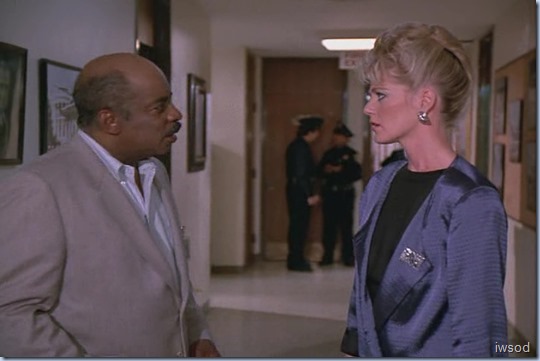 [LOL why would Billy be running stemwinder?! he’s running the side gig to create a window and make the Russians work for information so they believe it. This dialogue seems pretty clunky to me.. However, it has been successful in taking my breath away at how easily Francine believes Lee could have killed Dart and photographed stemwinder frequencies!]
…Let’s just say: I’m gonna make a suggestion… and hope like hell that somebody listens.

The scene ends there.

We move on to a warehouse district..

There’s a street dude watching Lee.. [Uh oh.. lol at the 80’s breakdance portrayal of gangs!
Kudos to KC for getting the homie’s names!]

Dupe: Hit him upside the head with his bottle, man. He’ll wake up. If a wino grabs you, it’s like a vise.
(Another dude moves closer to Lee.. who seems to be waking a little more)

Howler: I been rolling juicers longer than you, Dupe. [Err I guess Lee is a juicer?!]
(I’ll again go with KC’s description here:
Lee kicks his feet upwards and hits Howler on the head.

Howler falls backward (probably howling as he falls 😉 ) and Lee stumbles to his feet groaning, he puts his back to a wall, and looks around.

[Hey everyone – it’s West Side Story Time! Lee’s not liking being in America!
Not okay by Lee in America!
Not everything free in America!
*slap* snap out of it iwsod. This isn’t west side story. Focus!]
Dupe launches himself down the stairs that he was sitting on. Lee throws a large piece of litter and makes an attempt to escape past another young man with a knife.

[Stunt] Lee ducks back as the knife is thrust toward him then grabs the man’s arm and punches him in the face. Lee ducks behind the stairs to avoid another youth who swings a metal chain at him then kicks the youth in the stomach and starts to run away.)
Howler: Grab him!
(Lee pulls a runged piece of metal away from the wall and topples it toward the youths then begins to run and trips over a wino sleeping on the sidewalk.

[The graffiti throughout is umm interesting PG – hilarious!!! I see ‘Billy Be Bop or something there.. is this about Billy the bopper?! He’s famous with the homies?!
Err yep.. that’s how riveted I am by this fight scene! Oopsie..Focus Iwsod.. will Lee be okay?!!]
Lee scrambles up and runs down the alley. 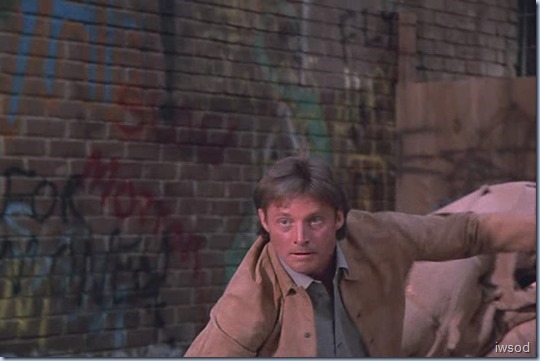 One of the youths runs after him and knocks into the wino who’s stood up. The five youths chase Lee; there are muffled sounds of shouting. Lee throws himself over a wooden gate buried under cardboard boxes and an upended sofa. Thanks KC!)

Okay, I’m gonna summarise the end of this scene: Lee runs, the homies chase him. lol! 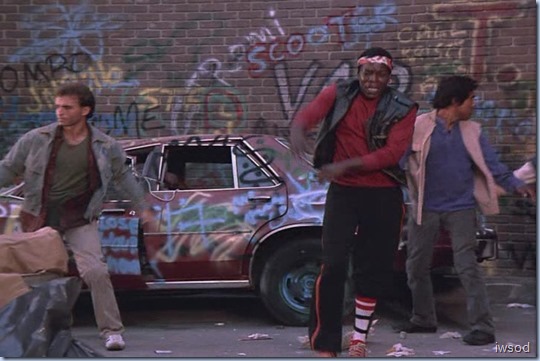 The scene ends with them still pursuing him but we didn’t see where Lee went. Go Lee!

We’ll pause here..
Things are looking pretty grim for Lee.. The Russians didn’t kill him at least, but… seems they must have some pretty awful plans for him! uh oh!!!
Any thoughts you’d like to share??

I don’t know why, but I thought Francine would be less cold that what we see here. Maybe because of the events of the end of season 3.. With Friends like Francine, who needs enemies.. Not much loyalty shown for two people who were instrumental in rescuing you from the Russians! (…Twice? were they Russians in Double agent? Magda was Russian wasn’t she? I can’t remember and don’t have time look – help?)
I guess this is only the start of a long journey in this two-parter.. Finally all the set up is starting to play out!

I’m looking forward to seeing how Francine’s loyalties play out here..
I’m impressed Billy stood by Lee and Amanda at least to start.. we’ll see if that holds – being the boss I am guessing he can’t take sides.. but maybe he can help Lee in other ways. Or maybe he will choose a side? We’ll see!

I also found the whole idea of Lee stealing frequencies when Dart was to voluntarily hand them over to give them to the Russians quite convoluted! The only explanation I can come up with is that Lee was to share some, but some were to remain secure. The initial dialogue didn’t make this clear.. Anyone else grapple with that confusion?

Lee can really use a friend about now..
And thank goodness Amanda is now an agent in her own right – he needs her!
So sweet how her name was the first thing he mumbled as he came to..
Can’t wait to hear from you!