Next up we find a bunch of boys playing basketball. I think two of them are Jamie and Phillip..

Watching from a bench nearby… 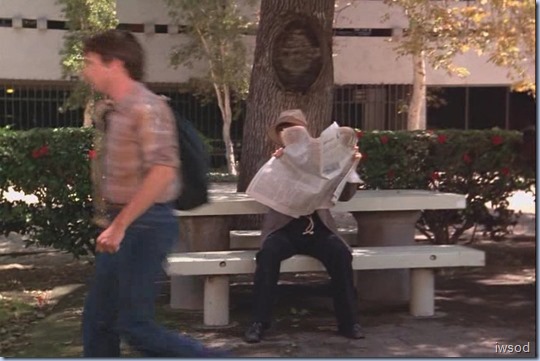 Amanda! Dressed in disguise and hiding behind a newspaper!
We watch the boys play basketball a little more.. definitely Jamie and Phillip there playing too..
Jamie takes a tumble with another boy.. 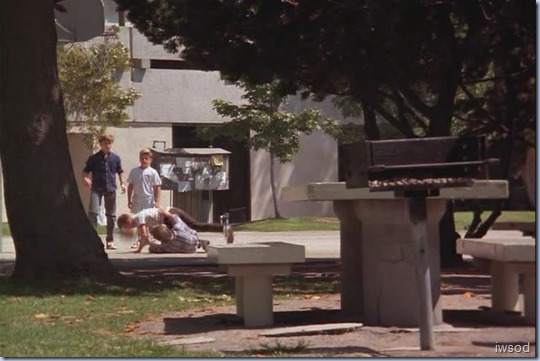 Phillip seems to help him up.. and they give each other five. Good to see Jamie and Phillip here actually playing as a team- together! [I think this is a case of Phillip thinking: He’s my brother! I’m the only one who can knock him over haaaaa 😉 ] 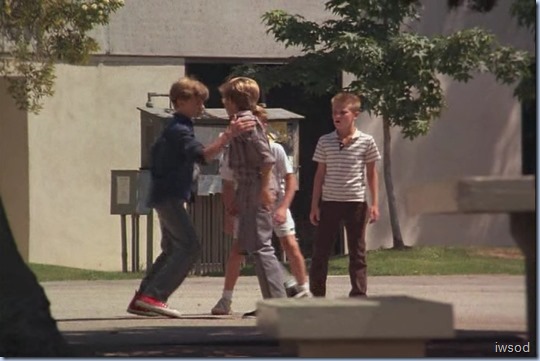 Amanda watches on while the basketball game continues..

She then looks across the way and sees a couple of agents are staking out the boys. 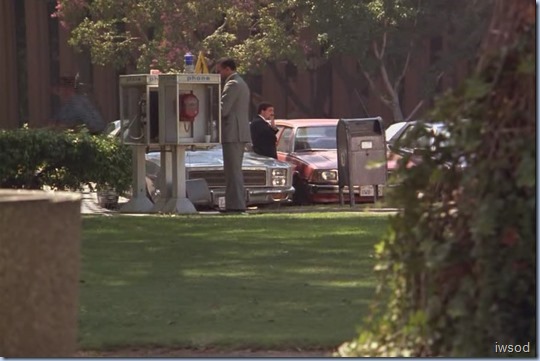 Amanda looks back towards the boys.
The boys continue to play basketball.. then suddenly a couple of other boys run past Amanda with their own basketball. Looks to me they were not part of Jamie and Phillip’s game, but maybe they were..
Amanda quickly grabs the boys’ basketball along with the newspaper. lol.

…Right over there, playing basketball—see ‘em?
[Great physical comedy here from KJ, she really gets into this – totally I love Lucy IMHO!]
Boy: Yeah.

I don’t know..]
We see Phillip and Jamie continue to play unaware Amanda is near by..
Amanda: I got a note here. Could you give this to Phillip or to Jamie? But don’t tell ‘em where it came from.
Boy: Yeah.
Amanda: You promise?
Boy: I promise. [LOL why would they promise? lol I think they’d just say hey some strange lady handed it to us!] 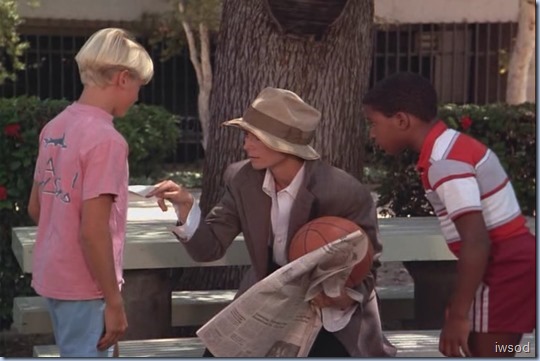 (Amanda playfully jabs him in the stomach with the note.. and gives him back the basketball)
Amanda: Take the note. Take the ball. Bye.

(Amanda playfully sends them on their way, and goes back to hiding behind the newspaper)

The camera follows a woman as she walks past Amanda.. only.. Amanda has already left.
[Hey, she’s good!]
The scene ends here.

We see a night time vista of Washington…

And we find Lee holding Rostov at gunpoint still. LOL looks like they are in the dark, and Lee turns on the lights.

Did he just give Rostov a slide show or something?! [Visual aids! 😉 ] 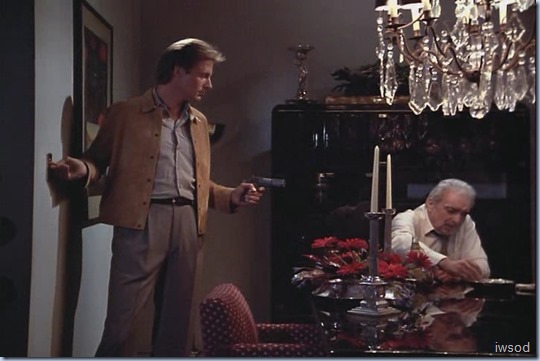 Rostov looks to be smoking..
Rostov: Your story would raise eyebrows in Moscow….The KGB central committee is toasting Sonja Chenko as a hero. (Heroine! And lol at someone who had to kiss Lee for a week being called a hero. So difficult! 😉 )

Lee: You believe that? You believe I gave her full access to Stemwinder and killed Phillip Dart to do it? [Oh my gosh. He looks so good!] 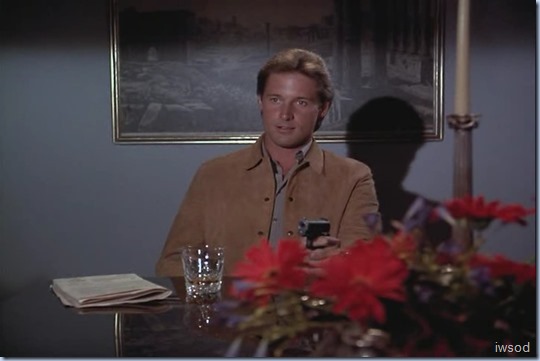 Rostov: Heh. She is a beautiful woman.

Judging by his expression, this seems to be news to Rostov.

He has another drink!
Lee: But Stemwinder was a nice, sweet feather in your cap, too, wasn’t it?

[Yep!]
…Nice enough for you not to ask too many questions, not to worry too much about being set up for a meet at Emilio’s.

Rostov: I had to go. Order came by telex directly from Moscow. Signed by Andreev Krimsky. [You been used budski!] 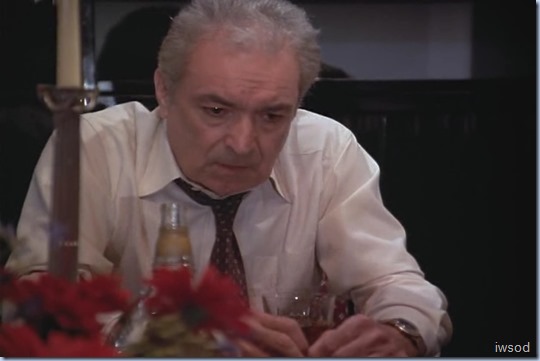 Lee: The chief of KGB Covert Operations… and Alexi’s lieutenant for nearly ten years when they ran the European station.

[Wow. Alexi was a massive success for Lee! Ironic, he would have been a massive feather in Lee’s cap

I like Lee’s approach here – not his usual approach! lol.. (much more subtle!) Lee gets Rostov ready to agree to help him.. By pointing out to Rostov that Sonja had been up to her own tricks, Alexi used him, and Alexi’s buddy in Russia used him – Rostov isn’t a king, he’s a pawn… Rostov isn’t winning half as much as he thought he was – he thought he was at least a bishop or a rook!
This leaves Rostov with a desire to take back some control here – maybe by working with Lee.. whooo I like it! ]

Rostov: What do you want?

Lee: I’ve got a plan to flush the old bear… 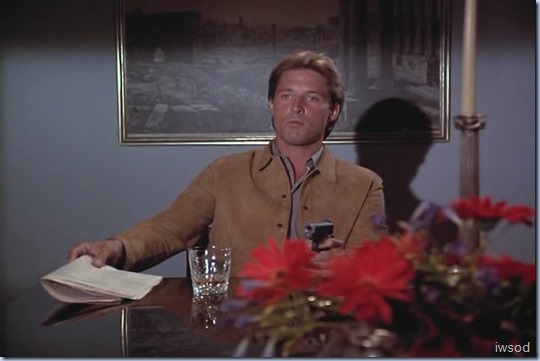 (Lee picks up the newspaper in front of him and tosses it to Rostov) … I’m gonna need some help in trapping him.

The scene ends there.. and we’re left none the wiser about what is being asked of Rostov!
The suspense continues!
But I must say…. for a Russian agent, Rostov loves his fresh flowers! I never would have guessed it – rofl!
Thoughts anyone?
The scene ends.
As soon as Lee tosses the newspaper to Rostov, the shot cuts to another newspaper – 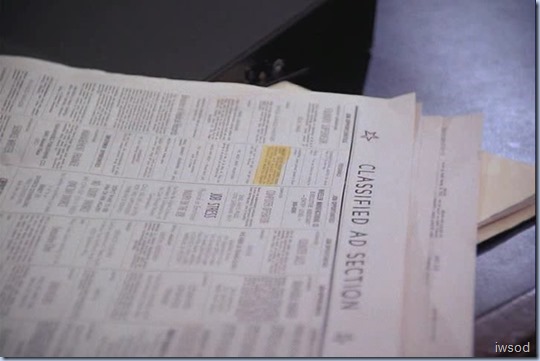 The classified Ad Section. We can see an ad highlighted in yellow –  [Love how another classified ad has written in capitals ‘JOB STRESS’ – lol! how appropriate!]
I’m going to pause here though before we continue with this next scene! Stay tuned!!