Time to catch up with the baddies!
Sonja: Tea, Grandfather? (Sonja offers grandfather some tea)
[That’s the first thing we hear from them? Oh Rofl!!!! this is too funny!!!  He’s playing chess? That’s what Russians do!! 😉 oh rofl at the chess set!!!! chess set + tea = Russian baddie, a cunning game player!]
(Alexi shakes his head) 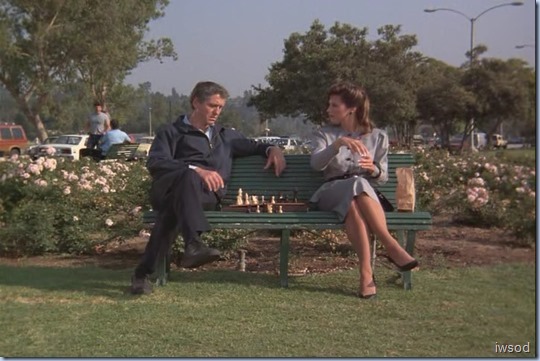 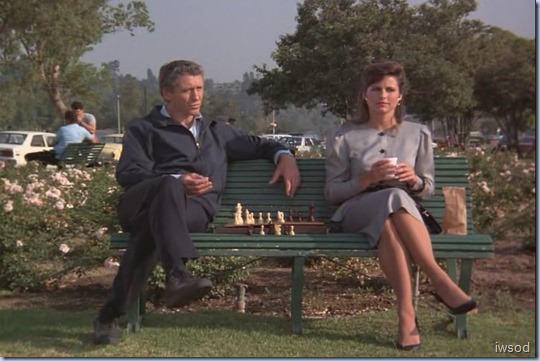 Sonja: What are you, Grandfather? Hunter or hunted?
[What is he? What are you?!! Why isn’t Sonja asking what she is?! To me she seems to be a pawn in her grandfather’s chess game! oh and I love these Russian family chats – so ominous and complicated! 😉 ]

Alexi: Both. Scarecrow is alienated and alone, but he’s got time to think—to plan. He’s a wounded wolf—desperate, but even more deadly. 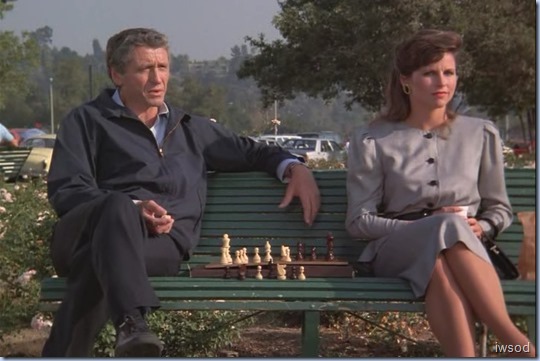 [I like Alexi’s accent! Not that I’d say I’m any kind of an authority on Russian accents- I just like it! and I like that he sounds Russian – unlike Gregory!]
Sonja: Forget about Scarecrow, Grandfather. 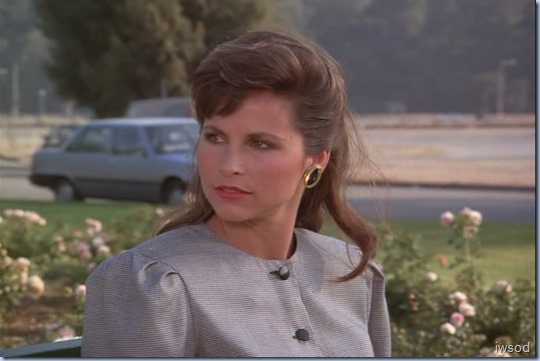 [It’s twisted, but I’m happy to see Sonja in these super fugly ugly earrings!! 🙂 ]
…Please?!. Go home to Vladivostok—live your life out in comfort…

Alexi: I will begin living again when Lee Stetson dies. 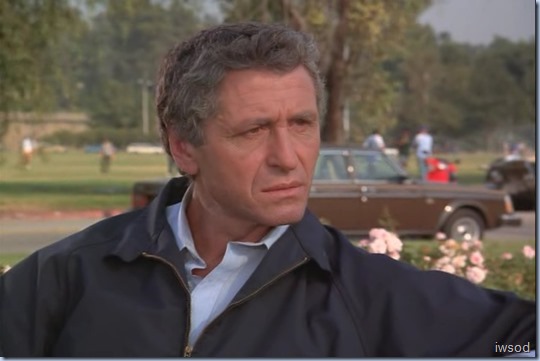 [Intense! A man with a singular purpose.

This scene ends there. Seems a bit of a random scene.. A little reminder for the audience of how obsessed and ruuuuuthless Alexi is.

Why is Sonja suddenly speaking with a voice of her own when in the previous episode she seemed more than willing to comply?! Hmm.. what’s going on here? I look forward to hearing your thoughts!
I think up till now we thought Alexi had succeeded in his plan – to turn the agency against Lee. Wanting Lee to die is a new additional element to this plan I think. I’m guessing Sonja was fine with the turning Lee into a traitor bit, but has had enough of this and wants it to end. Maybe that’s why she suddenly speaks up (seems sudden to me) – maybe she doesn’t want Lee to die?? Is it possible she could have a soft spot for Scarecrow after all their dinners together?!

Or.. maybe it was the good cup of tea that finally gave her the strength to question Alexi! 😉 Of course, Alexi is in this till the bitter end..

I guess Alexi is counting on the agency issuing the D-1 manhunt.. and he is waiting around to have confirmation (somehow) that Lee is dead? In the meantime, he is on edge waiting for Lee to enact his plan – not underestimating Lee is dangerous at this point. Okay, I guess I’ve gotten it straightened out in my head so far.. I guess?! How about you? If I’ve misunderstood something, if you agree, or if you see things differently- please share!]

Moving on, we find T.P walking across a street..toward a food truck..’Delano’s Daily Delites’..

I gotta say, from what we’ve seen of TP in SMK, a FOOD truck is the ideal cover to make contact with TP!]
Lee: Insurance money.
[Phew! that Russian frame up extras cover has come in handy 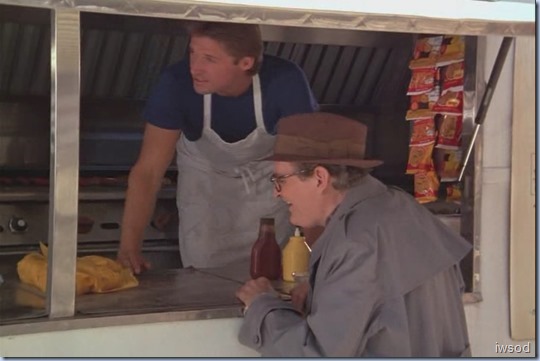 T.P.: Heh.
Lee: How’s your tail?
T.P.: Oh, the dogs are getting better, but I lost them the second turn around the Washington Monument. [Is there anything T.P can’t do? He is just the best source ever no?!]
Lee: What do you hear? 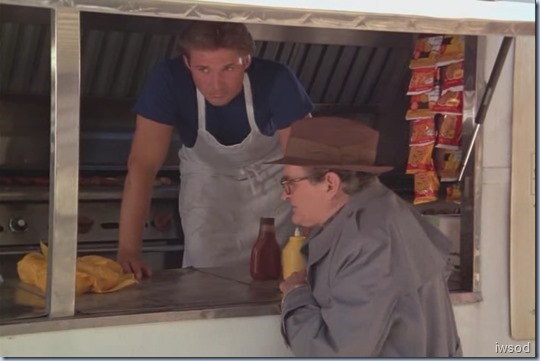 T.P.: Mucho. You two have premiered on the Agency’s most wanted chart at number three… uh, with a bullet.
[Whoooo who is 1 and 2?! Want to make some guesses?] 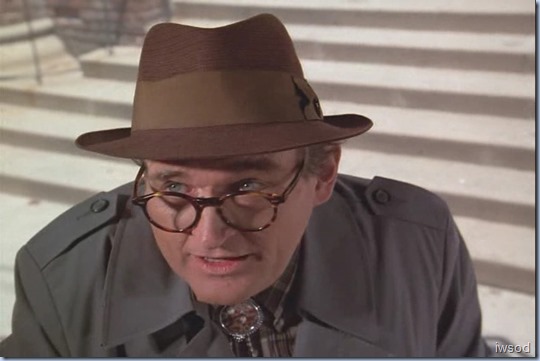 T.P.: And I suspect you’ll, uh… top the charts in a couple of days.
(Lee continues to make a hot dog and play the cover..as others walk by) 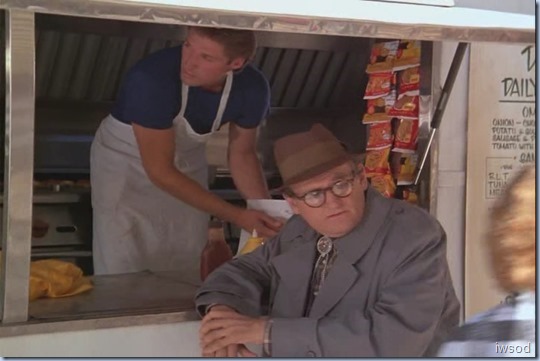 Lee: Well at least we know where we stand there.
Lee: Here. (Lee hands T.P a hotdog)
T.P.: Hmm.
Lee: I’m more worried about Alexi. He’s here, pulling the strings—I know it.
T.P.: Oh, uh, by the way… Sonja Chenko is Alexi’s granddaughter. [Why does that seem so anti-climactic to hear that now? I guess I was thinking it had already been uncovered..]
Lee: Who’s she working for? Rostov or Alexi?
[Oh my, finally we get a close up. Lee is lookin good! I like hot dog maker Lee!

This is definitely a ‘Daily Delight!’ Certainly can’t be referring to the food!]
Lee: Or both of them? [She’s Russian! Of course it’s going to be complicated!

]
T.P.: I don’t know. [Mark your calendars all! TP doesn’t know something! 😉 ]
Lee: Our only hope is finding Alexi before the Agency finds us.

[ROFL there’s something weird here with the sauces and T.P’s hot dog..
this..

and then super super quickly this..

Magic sauce!
Err focus on what they’re saying iwsod!!]
T.P.: Well, he probably feels the same way about you… uh, but how do two phantoms meet each other in the shadows? You can’t exactly advertise. 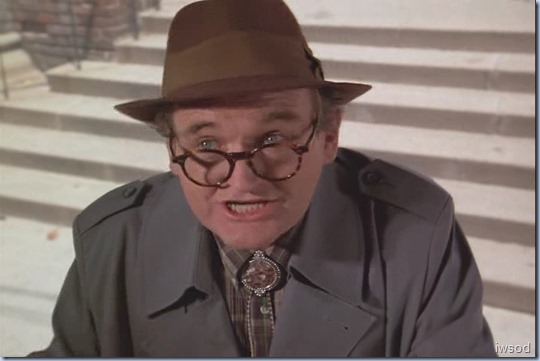 Lee: Maybe you can.

We see a large block of apartments..

Inside, it looks like Rostov is home from work. He puts down his brief case, we see Rostov take off his jacket and put down his mail. [Looks like he enjoys the finer things in life!]
He pours himself a drink..

Lee: Pour me one.
Rostov freaks out! 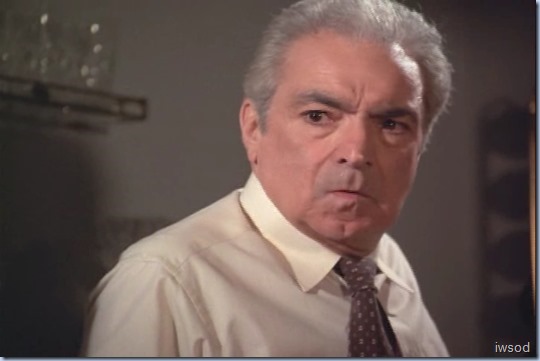 He turns toward a talking arm chair.. nah.. we see Lee give a dramatic and super sexy reveal

Done with such flair!

He’s even put his outfit he likes to get stun gunned in on again. I guess it could have been laundered by now..]
Lee: I’m American. I like ice.

[I guess he’s not sure what Lee has come for..to make me serve him a drink so he can then kill me?!

Is that Lee’s plan? Kill Rostov and prove to the agency he isn’t working for the Russians? The reference to ‘Ice’ I think implies he could be threatening to kill Rostov..
Hmm.. but Lee intentionally setting out to kill someone doesn’t sound like a plan he’ d come up with.. Guess this is that ‘advertising’ T.P was talking about.. but exactly what Lee is up to I don’t know. I really don’t remember any of this at all!!!!!! I’m looking forward to finding out how this unfolds!]

Here’s a gif to finish off this scene..

Peak-a-boo smk style! I couldn’t resist.. it gave me the giggles.. because he looks so super suave