Sorry for the delay in publishing this – and eek! At such a tense moment!! Gah!!!
Has Billy betrayed Lee? Will Lee think Billy has betrayed him??!!! Will Lee and Amanda be captured and D-1’d and G-1’d?! On with the show!

(Amanda tosses a smoke bomb down on the ground floor.)
Agents: Move in!.. Come on, come on!… Cover the exit!
(Amanda tosses another smoke bomb as the agents all move in..
Billy stays where he is while these agents scurry around.. [he’s certainly not going to help them!] 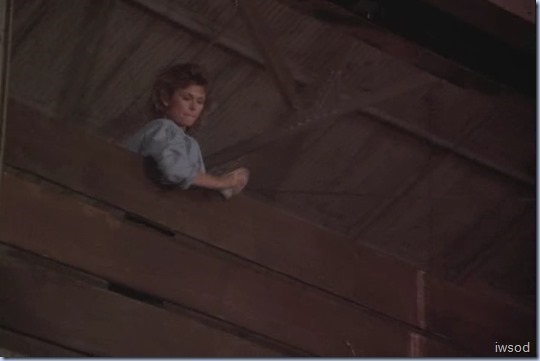 Lee runs around with his gun in the smoke, Amanda tosses another smoke bomb, agents scurry around some more..

More running and scurrying through smoke. Lee reaches a winch of some kind that raises him up to the next level to join Amanda.. [Ahhhh there is some kind of wonderful metaphor in that I just know it.. 😉 ]

[rofl is that winch hilarious or is it just me? It’s soooo slow it’s like Lee is a sitting duck on that thing! But.. ] The agents are not fast enough, and Lee makes it up to the next level.. 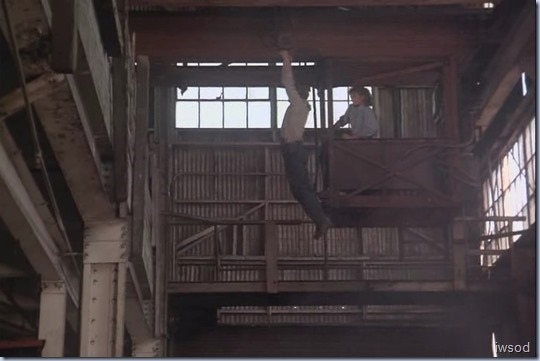 Lee reaches out to take Amanda’s hand and they start running.. 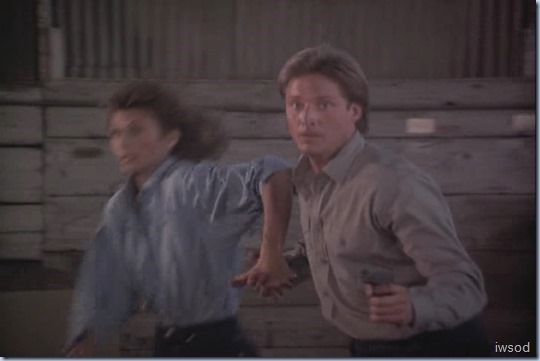 An agent spots them upstairs..
He yells out to the other agents that they are upstairs..
We see Lee and Amanda making their way across a bridge outside..

Downstairs, in comes Dr Smyth and his cigarette [adding to the smoke levels!] 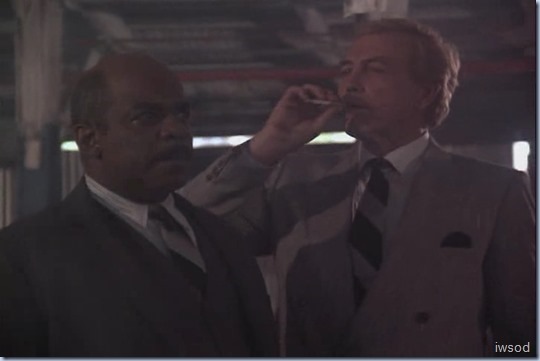 [Dr Smyth looks all smug at having destroyed Billy’s plans here.. Billy? He can’t even look at him!

You know when this is over, Dr Smyth should lose his job! ]
Dr. Smyth: Ç’est la guerre, Billy.

Finally, Billy turns to look no glare at Dr Smyth.

[All things said and done, Dr Smyth seems to be at war with himself (aka his own side. but then I think Dr Smyth only has his own side-himself!) – and it’s a war of his own creation. If they’d cancelled the stemwinder games or at least changed the flippin radio frequencies, none of this needed to happen.

[I do wonder how Billy is going to respond to this double cross!]

(Billy doesn’t answer. He just walks away.)
[Me thinks Dr Smyth may have won this battle, but he has lost the war!]

(Outside the building, Amanda climbs down from the pipes with Lee’s help. They sneak behind the boxes etc.

they look around being super careful.. 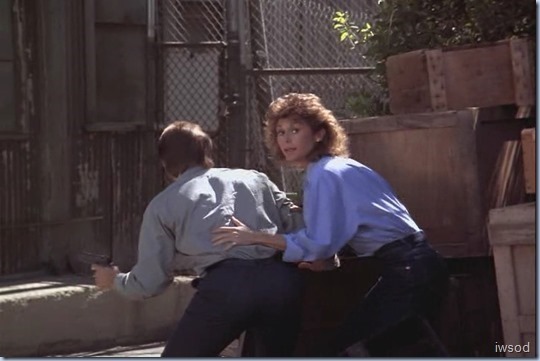 [I think Billy sent the agent inside.. to help Lee and Amanda? I don’t know..]
(Lee takes cover also. 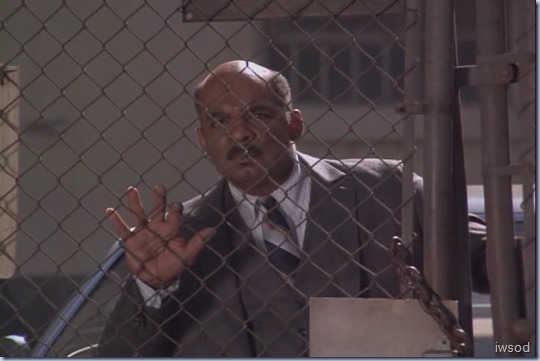 [Billy seems to have guessed Lee and Amanda are there somewhere.. and the scene ends with Billy looking in their direction, but not seeing them – all alone, and looking pretty bereft.]

The scene ends here.
[I’m left with the vibe that Billy can’t help them much.. and they are on their own.. and Billy looks really sad about this 😦 what do you all think?
Maybe Billy was trying a low key tactic to win Lee’s trust and then nab him? Dr Smyth here could have ruined everything – when Billy fully intended to bring Lee in! [I don’t think that’s what Billy was doing, but it could have been is my point]. I don’t know if this is true, it’s just the vibe I get at this point.
Boooo to Dr Smyth! I hope he becomes the dog the President kicks after all this!

We see a shot of downtown DC.
[LOL is that a guy parked on the side of the road selling melons? 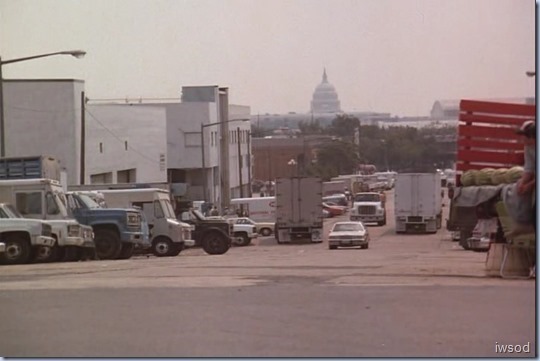 Random! And.. is that Amanda’s car in the middle there? have we seen this shot before?!]
(We find Lee walking along a street incognito.. 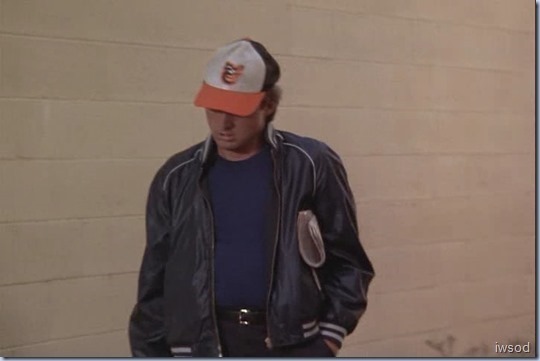 Whooo nice baseball cap!)
[Is this still part of their escape from Dr Smyth and his agents? did he have the jacket/cap stashed somewhere and the tshirt under his shirt? me confused.. then again, maybe Lee’s tactic is working perfectly: iwsod is confused! ]
(Lee sees something concerning..

So he ducks down behind a rubbish dumpster. 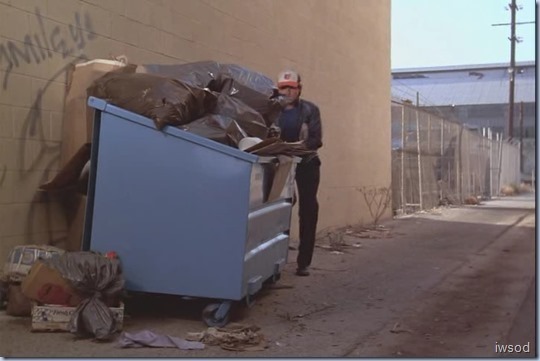 We cut to Amanda walking down a street,)
[seems she’s undercover as a walking pineapple. 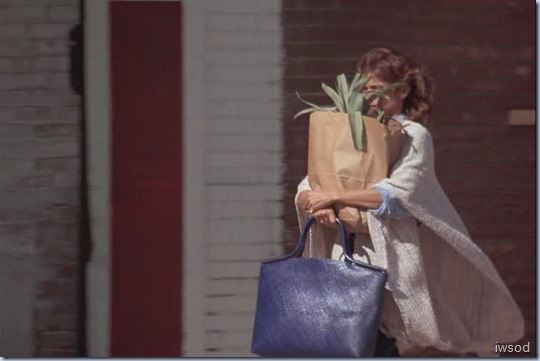 With a massive handbag

]
(Amanda ducks into a driveway..

We cut back to Lee now wearing a different kind of cap, and a rugby shirt.)
[Did he hide that there in advance? Nice! whoooo he’s that good!! 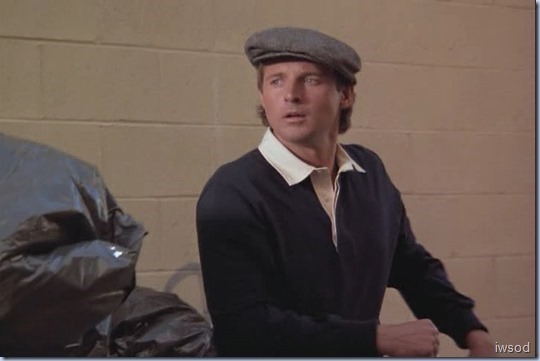 He pops up and tries to look casual.

Behind him, another guy pops up wearing Lee’s baseball cap and jacket. lol. Um did Lee plant that guy there? or randomly approach him? seems like a strange outfit to swap. I’m going with it was a set up and this decoy Lee dude is part of Lee’s ‘family’.

Decoy Lee turns and walks in the opposite direction.
Amanda steps out of the gateway,

[me thinks she still looks the same.. it’s not like her head was covered before. different handbag? whooo who is she?!
lol. okay I exaggerate, but I think the grandpa outfit she wore passing on the message to the boys was better.
It’s great fun watching Lee and Amanda do their spy stuff here regardless!]

Amanda walks down an alley way, and the food truck stops in front of her.. Nicely done!

She was looking a bit peckish!