12/15 Season Four Episode Four: No Thanks for the Memory

Hi Everyone! Sorry the last week or two has just flown by!
Where are we? Something about operation rainbow family… what was that again? I need a refresher!
Billy said something like-  ‘Rainbow Family’ is the code for a squadron at Andrews temporarily assigned to the Looking Glass missions. They gave the stress tests to the pilots who flew the SAC’s headquarters plane- called Looking Glass.
If the US is the target of a first strike, command switches upstairs.
Lee said something like- There’s a Looking Glass plane in the sky twenty-four hours a day…As a security precaution, there are three lookalike planes flying decoy, and there are nine crews on an irregular rotation.
Aie.. what was the name of that water reservoir that was the cleanest water in the world again?! lol.. Anyway, back to Lee’s later that night.. Amanda’s car is parked out front. Where it belongs 🙂 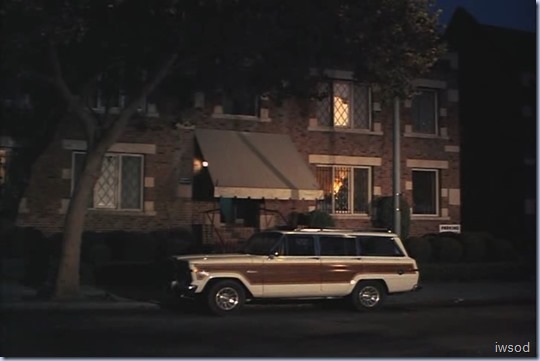 Lee is on the phone: Okay, I’ll talk to you later…

(Lee hangs up and walks around to join Amanda): That was Billy. The pilot scheduled for the next shift was just escorted to the base. Nothing happened out of the ordinary.

[lol I thought this shot was funny.. like ta da! I see Chinese take out on the coffee table.. Amanda is picking at her food with her chopsticks. Nice continuity! ] 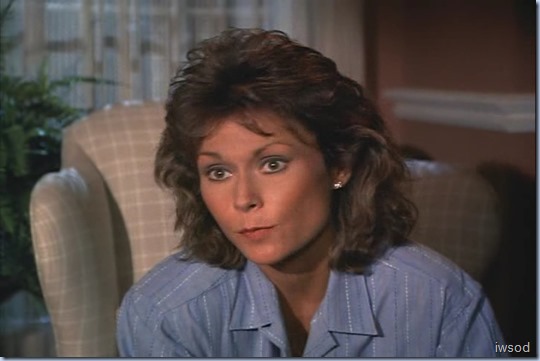 Amanda: Yeah, and with nine pilots on rotating shifts, it could be days before anything happens. [I thought it was nine crew, not nine pilots! Hmmmm I guess ‘crew’ here is singular not plural..talk about convoluted.. Crew = pilot.
Aie. me confused…I feel like I’m watching through the looking glass!]

Back to the ep. We cut back to Lee considering Amanda…
[Oh my gosh. The look he gives her here? I melt!

No. I take it back. I die!!!! Lets all just stare at the above image for a week silence – meet you back here in a week?! ]
Lee: Hey what’s the matter? Are you okay? You haven’t eaten very much. 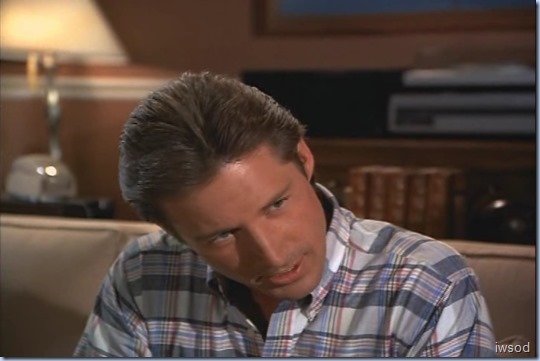 Amanda: I just keep thinking about Zhmed. Once Tolst gets finished with him, what’s going to happen to him? 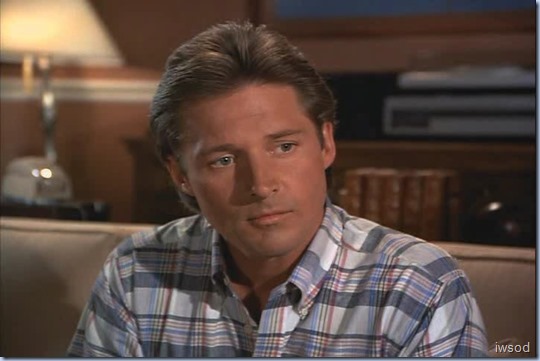 Lee: Once he’s finished with him, he won’t have any use for him anymore. 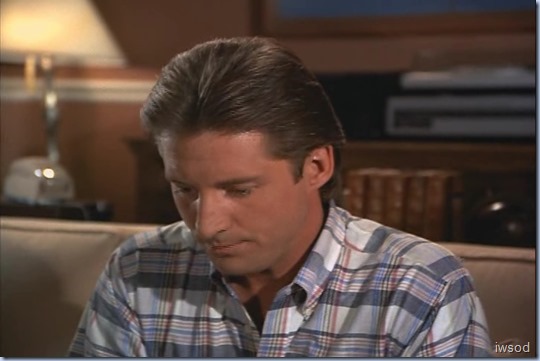 [Maybe it’s just me.. but I love that Lee does not sugar coat this for Amanda. He can see she is stressed and worried, but he doesn’t hide the reality from her, he respects her and trusts that she can cope with it. Really – no babying after stemwinders

]
Amanda: Think he’ll send him back to Russia? 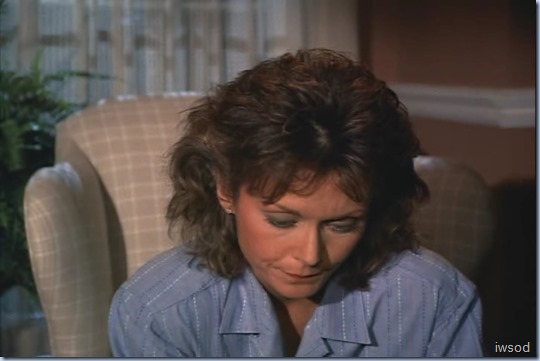 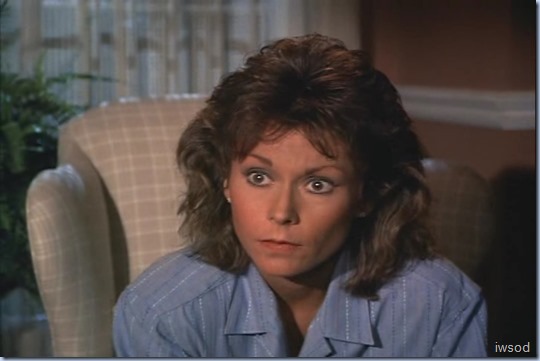 [Whoa.. it is really evident that Lee is not sugar coating this! I like this.. He is straight up, but he is also sensitive and empathetic in how he says it. He’s not happy this is the reality of the current situation. but it is what it is.] 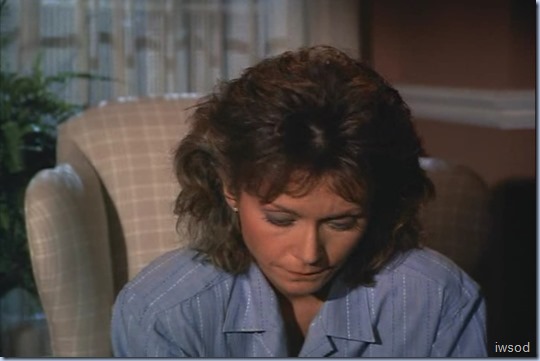 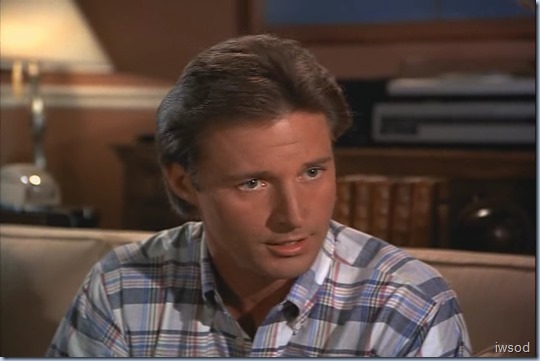 …Whatever they have planned for him, well, they can’t do it on Embassy property…

…And before they remove him from the Embassy, well, they’ll convince him the KGB is everywhere and he’ll be afraid to run.
(Amanda picks up the newspaper in front of her as Lee finishes his sentence..) 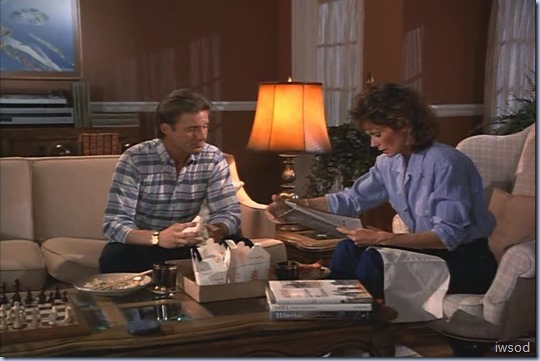 Amanda: If we could figure out a way to get a message to him, would the Agency help? 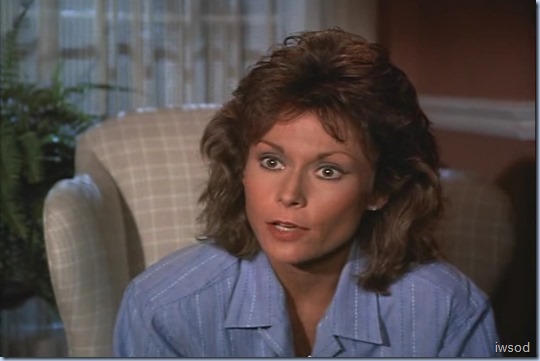 Lee: Yeah, sure. Might be a little tricky.
Amanda passes to Lee a newspaper

– showing him an ad for “Maverick”.

LOL love the text- Sometimes a fellow has to go for it! That’s Maverick.
Lee gives Amanda a side glance..

He looks so good with this lighting.. and that tan.. the way he looks at Amanda here.. I die.. Again. Hmm… Let’s just stare at the above image for another week.. no two. Meet you back here in two weeks. drool trance
We need to build up some resistance to all this swoony goodness if we are to make it through the utterly swoon filled upcoming eps!!! To help us.. here’s another:

How are we doing?
Are we all okay?!
Amanda.. she’s made of tough stuff..
Amanda grins.. 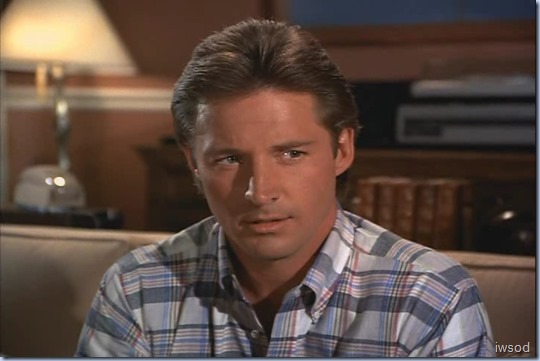 be a maverick!!!]
Where would Lee and Amanda Panda be without the newspaper?!

I shall too.. while I try and recover from all this swoony goodness.

it’s been too long since we’ve seen a swoon thuddy.. sorry I’ve been so neglectful of swoon thuddies!!!
Any thoughts you’d like to share?!

18 responses to “12/15 Season Four Episode Four: No Thanks for the Memory”