Back to the Q bureau to see what Lee and Amanda can dig up about Nesbitt.
Lee:  Something about this just isn’t right.
(Amanda is scrutinising a photo with a magnifying glass. A photo of the Petrovich twins maybe?!)
Amanda:  Did you see this?  Look at this in Nesbitt’s calendar. [Ummm anyone else find this picture confusing? I concluded we are seeing Nesbitt’s calendar, and someone has at the agency has already gone over it and written notes in it in the blue pen. What do you think? Because why would Nesbitt be noting he was with Dursak in the third person.. and it looks like whoever wrote the notes doesn’t know how to spell Nesbitt’s name. lol – end credits definitely spell it ‘Nesbitt’.] 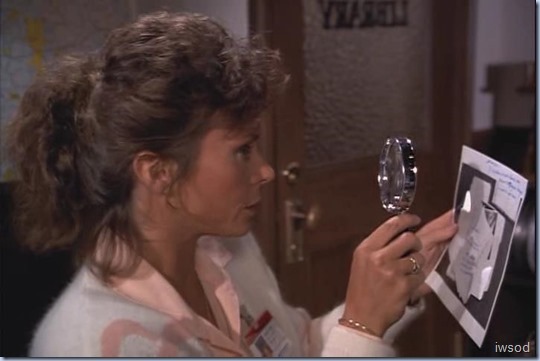 [If only Lee had taken a photo of the next page in Nesbitt’s calendar– it said: ‘Steal Missile (muahahaha)’ and the week after? ‘hire Fouts and his plutonium’. whahahahaaaa.. anyway… focus iwsod]
Lee:  Yeah, Learjet.  Private.  Expensive…
[and a great handle. Right Learjet?!!!]
… That’s the kind of plane he’d own.
Amanda:  The pictures of Nesbitt and Dursak were taken at the Telegram’s hangers. [The telegram has hangers?!]
Lee:  Let me call Charlie.
(Amanda hands Lee the phone)
Amanda:  Yeah.  Nesbitt’s supposedly flying across Canada today.

Lee  (On phone): Charlie Benton, please.  Yeah, Charlie.  Lee Stetson.
Charlie:  I’m going nuts.
Lee:  Yeah, I know.  I know.  Listen, one question.  What kind of plane does Nesbitt own?
Charlie:  Two of them.  A Learjet and a Gulfstream.  Both here in DC.  Why?
(Lee’s happy with this answer)

[Me too. It gave us a Lee’s dimples sighting!! Nice. Very nice. ]
Lee: Thanks, Charlie.  Thanks a lot.  No, don’t worry.  No one’s gonna scoop you… Yeah, I’ll talk to you later.  Thanks a lot.
[LOL I bet Charlie heads straight to the airport after this call!]
(to Amanda): Guess what?  He owns two, a Lear and a Gulfstream.
Amanda:  He’s going to fly across Canada.  Why is he removing the tanks? 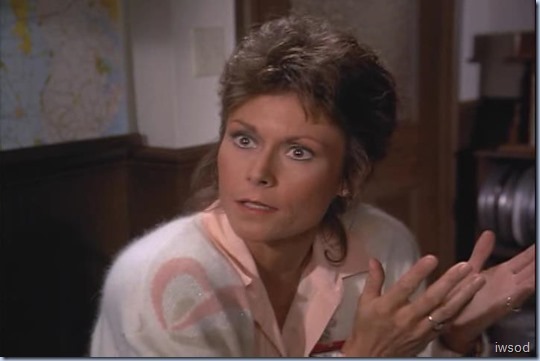 (Lee makes another call to air traffic control to check Nesbitt’s flight plans submitted..
[love how he just punches that number in to the phone, like he knew it by heart?! rofl!!]
Anyway, air traffic control reports a flight plan was submitted for the gulf to fly to Toronto only.
Lee identifies that the Lear is still in DC, and tells Amanda that Nesbitt is ‘rated to fly both of them’)

[How he knows that about Nesbitt I don’t know but I’m just glad he didn’t need to call someone and ask haaa.]
Lee:  We’d better check it out.
(Amanda packs up to leave)
[whoooo I see she’s wearing the heart necklace here]
Amanda:  What about back-up?
Lee:  Uh..  We’ll tell operations where we’re going.  They can get ahold of our cover at the Tritanium site. [huh?]
Amanda:  Right.
(they both leave the Q bureau.)
[Amanda doesn’t take her handbag? Whatev. what does Lee mean about their cover at the Tritanium site? Was he maybe supposed to say their cover at the Telegram? Me confused.]

I sense we are getting close to action finale time! So I’m going to pause here – It seems like so long ago that Lee and Amanda were bantering about their pasts and secrets. I would have liked to see it mentioned again here in the Q bureau but everything seems to be pure plot at this point..]

Lee and Amanda head to the airport..
[with no back up? I don’t know I’m confused.. but whatev.
Whooo that was fast, looks like the corvette has it’s door back!] 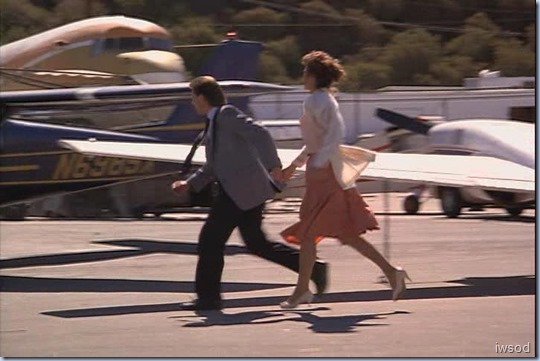 clunk clunk goes Amanda in her heels as they try to sneak. She’s going to need to source quiet heels if she’s going to be lying and sneaking for the government.
It’s funny to see an airport in the same episode as the Dursack/Serdeych actor – do you think this is the same airport used to film the end of WOTSTW?]
Lee:  Charlie’s photos are right on.
[yeah. he took a photo of a hangar, and.. there’s a hangar! tee hee.. whooo that was some tricky photography!]
Amanda:  Let’s go inside.
(Lee and Amanda sneak inside, avoiding notice – they see the war head attached to the learjet and have a little discussion about it while hiding behind a plane in the hangar. 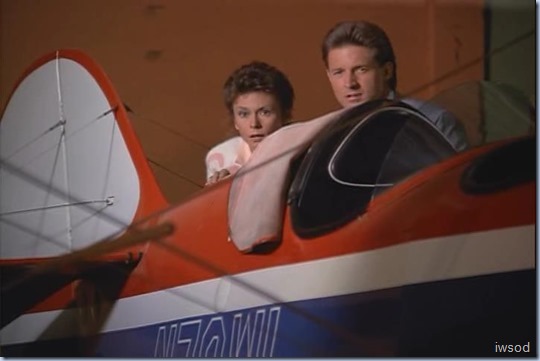 Amanda shows she’s been learning a thing or two about missiles which is cool. lol.)
Amanda:  Short-range, air-to-service, sign for the F-4.  Obsolete.   Studied it in hardware.
Lee:  Yeah, well, the Air Force dumped all our Slingshots in the 70s, all over the world.  Not carrying the normal cyclonite warhead, though.  It’s been modified to thermite.  Look at those guys wearing contamination suits.  Radiation.
Amanda:  Nuclear warheads?
Lee:  Well, nuclear yes, but not a vision weapon.
Amanda:  The shopkeeper was supposed to have some Plutonium.
[okay this made me pause.. shopkeeper?! ohhh yeahhhh I’d forgotten all about that Fouts guy and his name.. The shopkeeper! rofl. I confess I’ve not been super engaged with remembering aspects of this plot – hope others are paying attention and can help us out!]
Lee:  They burn down in the Tritanium.  Plutonium would be useless and radioactive for the next 300 generations.  Watch my back.  I know they’ve got a fix, but we’ve got to be positive.
Amanda: Right.  Careful.
Lee:  Yeah.
[Right! some acknowledgement that they know where all that tritanium is stored. well that’s something. Rofl. 300 generations, Nesbitt reckons the effect will be felt for 20 thousand years!]

{Nesbitt and Dursak are walking around.  They check the plane and pause to look at the missile again.  They catch Lee who is looking at some papers.}

Lee sneaks around inside, and is spotted by Dursak and Nesbitt, so Lee plays a cover.
Lee:  Well, everything here seems to be in order.  Excellent…

…I’m with the FAA.  I was making a spot check here.  And believe me, gentlemen, I intend to file a glowing report.
[Nuclear glowing!]
(They aren’t buying it, they search Lee and uh oh. take his gun.)
Nesbitt:  Check outside and see if he’s alone.
Dursak:  Tie him up… Wait until we are airborne.  And then you must kill him.

[Umm why wait? err not that I want Lee to die but lol]
(Dursak and Nesbitt go to leave, Amanda continues to sneak around.)
[They leave one guy with Lee. haaaaa…]

[His expression cracks me up. so cliche I love it.]
(Amanda watches on, and… literally throws a spanner in the works!)
[Does that translate for North Americans? I think this might be a British saying]

She tosses the massive spanner, and the bad guy turns to look. Lee takes the opportunity to kick his feet out from under him. 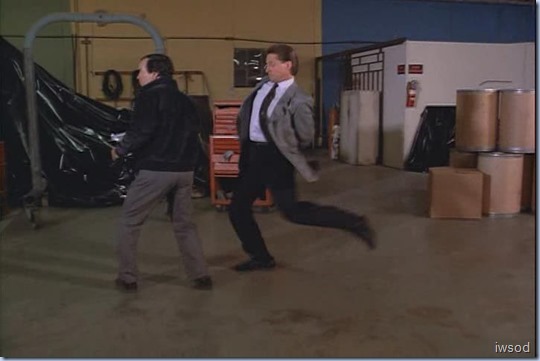 I howled with laughter at this point. this is the lamest bad guy ever.]

(The baddies are in the learjet getting ready to take off.)
[Hurry Lee and Amanda!]
{The security guard from outside hears the gunshot and runs back inside.  Amanda grabs the gun from the guard that is down and brings it to Lee, then helps him get untied.  The outside security pulls his gun on Lee, but Lee shoots him first.  Outside security guy is down.  Lee and Amanda run toward the exit in time to see Nesbitt in the Learjet starting to leave.  They run for the Corvette.}
Lee:  Get on the phone and get us some back up.
Amanda:  Yeah.
(They get in the car.)
[crank up that pursuit music!! Maybe the maniac song?!]
Amanda: (on phone)  Yes sir, about four miles south of Rockville.  Yes sir. 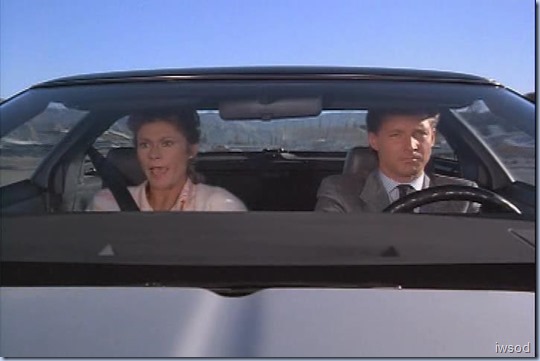 [KJ goes for funny here, thank goodness. it needed it. I love her delivery of this line! KJ does funny scared so well!]
(the jet continues along the runway, but hasn’t started taking off yet)
Air traffic:  Clear niner-zero-one, you are clear on runway three north.

Nesbitt:  Thank you, tower.  This is Lear nine-zero-one.  We’re rolling.
(The vette hits the runway, and overtakes the learjet that is speeding up for take off.)
[Yes, you read that right!!!!! Okay – now that his really funny!!!!! Whoa. that corvette really packs some speed! It can overtake a learjet about to take off?! Whahaahahahaahaaha..  oh that’s priceless! ]

Air traffic:  Clear niner-zero-one and all runway traffic, this is control.  Hold all take-offs.
Dursak:  Take it to the air, Nesbitt. [Maniac!]
Nesbitt:  I don’t have enough airspeed to rotate.
(too slow to lift off, Nesbitt pulls back on the throttles)
[Well. That is very non-maniac like behaviour. I’m disappointed!
Yes, the Corvette vs the Learjet in a speed race, and the corvette wins. Hey why does a car chasing down a plane seem familiar? we seen this before? I’m not even going to look – I’m gonna throw this out there and I’m sure someone here will know!]

{Nesbitt opens the door and Lee fires his weapon toward the plane.  Nesbitt quickly gets back inside.  Amanda gets out of the car next.}

Amanda:  What do we do now?
Lee:  We sit back and wait for the cavalry.
(So. that’s it. Baddies caught. Tritanium saved. Star Wars defense still viable.. and.. I’m sure Dursak’s going to need to gobble a lot more antacids in future.)

It’s tag time!!!!
Back to Nedlindger’s… and Charlie is catching up with Lee and Amanda.
[Oh hey, I’m surprised he didn’t hobble along to the airport to take photos of the nuclear warhead!]
Charlie:  You know, I’ve never written a story that pleased me more.

Charlie:  An editor I knew used to say newsmen make lousy news stories.  But I guess they never knew Nesbitt… 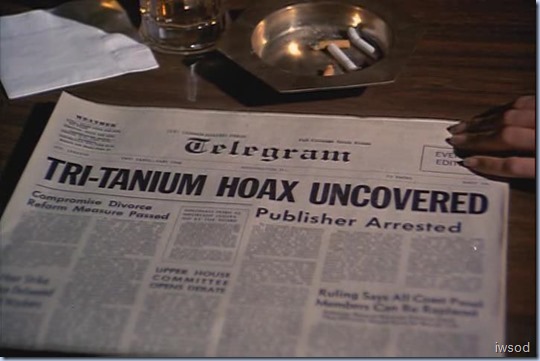 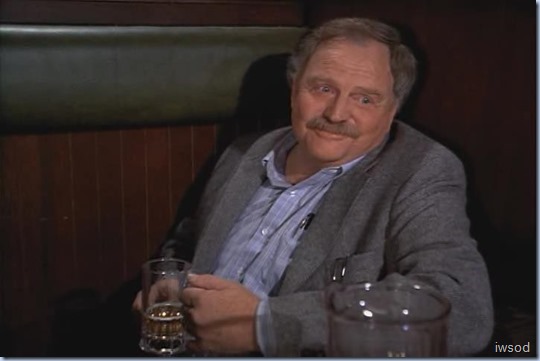 [ahhhh but.. does it beat fashion hints and fou fou recipes?! I’m going to ignore the ‘newsmen’ reference. ahem.]
Lee:  Sure does.

Charlie:  Thanks.  Both of ya.
[whooo Charlie’s a big old softie. He gives Lee and Amanda some hand squeezes and gets all mushy. He’s probably on pain meds…]
Amanda:  Sure. 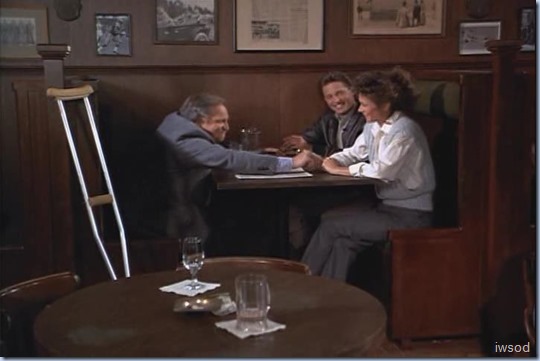 Off camera:  Benton….telephone.
(Charlie gets up from the booth.)
Lee:  We’ll see you Charlie. 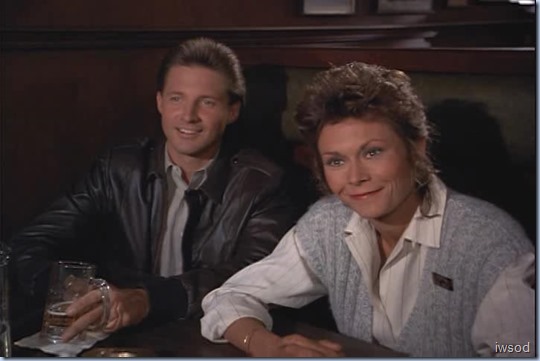 Charlie:  I’m a reporter.  I’ve got a keen sense for big stories.
(Charlie glances between Lee and Amanda. Charlie chuckles to himself and hobbles off.)
[Ahh Charlie the loveable joker. Finally he’s starting to be less annoying to me. haaaa. Right as the episode ends. lol. ]
(Lee and Amanda wordlessly react to Charlie’s cheekiness.) 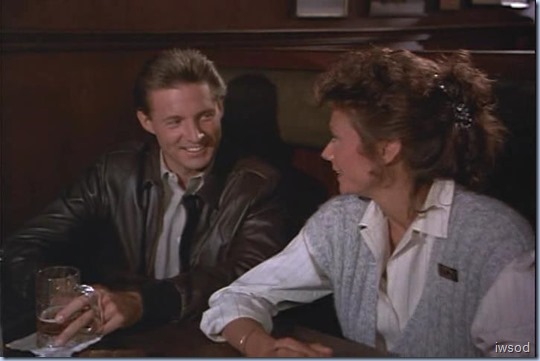 And the episode ends there.

All pretty low key for a tag. What do you think of it everyone?
So what happened to Gunning? Did he live up to his name and get shot?!
It feels like quite an abrupt ending to me. Understated. Especially considering the fabulous cleaning out of Lee’s closet scene and tossing of the coin scenes from earlier. Why didn’t the tag revisit their sharing of secrets: with each other?? Aaaaand especially when the episode is all about the ‘Need to Know’.. Tags tend to bring a personal touch to the ending.. so this one seems too brief. Is it just me?

I get the vibe that this episode was put together pretty rushed, and there are a few moments of smk genius, that are thanks to BB and KJ, but the rest of the episode is pretty mediocre. But the special moments are… REALLY Awesome!!! so the ep is worth watching anyway!! What do you think?!

NOTE: Next in the airing order is: Santa’s Got a New Bag. BUT!!!!… as we’ve discussed previously – we are going to be swapping Santa’s got a New Bag with Any Number can play – upfront! Making an exception here- as I would usually blog in airing order then discuss if it should be different. If you are wanting to read more about why.. see here at Nedlindger’s.

Up next…. Any Number Can Play!  I’ll have a few week’s break and will aim to start walking through ANCP on 31 October. Hoping this will mean we start SGANB right before Christmas! 🙂