The episode starts with Lee and Amanda at a fancy party.. Amanda tells Lee this is her first real embassy party.. and Lee immediately explain why she is there, yes says Lee that is Why Billy had Lee ‘use’ Amanda in this operation.. uh oh.. don’t tell me Lee is back to his old tricks of blaming Billy for Amanda being around..

( I love how they have this conversation about Billy suggesting Amanda because she is not known around the Embassy circuit as they make their way past all the guests saying hi to people.. where anyone they walk past could hear them- LOL!)
What does Amanda have on her

I hope we don’t see it again! I remember seeing princess Diana wear one of these, a green one..

Love how Amanda says she should have borrowed a better dress. 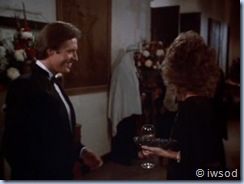 Leeeeeee!!! you never tell a woman she looks ‘fine’that is just horrible!! At least he is saying it with a smile and humouring her at this point rather than being disinterested or bad humoured like he use to be! I don’t think Amanda is terribly hurt, as she wouldn’t expect gushing from Lee! She is just looking for reassurance here is all..Do you agree? or see this differently? feel free to share!! I only give my opinion.. it’s not fact

So, they are looking for someone..

Amanda: Look, you know, if you would tell me what she looks like, I could help you look for her. I mean, all I know is that she’s Hungarian. LOL.. if that isn’t stating the obvious I don’t know what is!!

This woman they are looking for is 5 foot 7″ , has

dark brown hair and is wearing a black dress.. – as Lee says this, he looks at Amanda and seems to realise- whoa! well that

could fit Amanda’s description! The penny drops with Lee.. that is half the women at the party!!

Love how Lee turns to Amanda here and has a nervous chuckle – cute! Lee says ‘ Excuse me’ and goes off – to check if that girl that just walked past is the one they are waiting for-I think… I’m not sure but it looks that way.

Ahh this gives Amanda the chance to be complimented!

Ludvichio Lupo: (something in italian..) Bella donna!
Amanda: Huh?
Ludvichio Lupo: I saw you across the room, I can’t believe it! Do you know Il Vecchio’s Contessa di Cesare? (Any italian speakers reading this? Who would like to have a go at translating exactly what he says to her as he approaches her? and.. do you know the painting ‘contessa di cesare’?? I googled it.. but had no luck- I was keen to see what she actually looks like!  )

Amanda: ah no, I don’t believe we’ve met.
Ludvichio Lupo: Ah! The same, uh curve of the cheek. The same

Amanda: Oh
Ludvichio Lupo: I must know you. 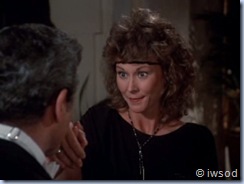 Amanda: hmm..
He kisses her hand and
Amanda just smiles

Ludvichio Lupo: I see this uh, vision. My name is Ludvichio Lupo. And you are? ( he starts kissing the palm of her hand now.. ) 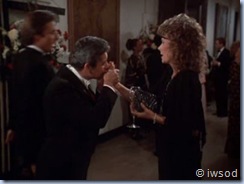 Lee: engaged for the evening.  (Lee comes back and puts a possessive arm around her back.. whooo)
Amanda: yes I am.
At this, Ludvichio Lupo immediately drops Amanda’s hand and smiles at Lee – he seems to realise encroaching on another man’s territory is not the done thing! (Lee gives him a smile too!) Can’t blame a man for trying eh..
Ludvichio Lupo: Scusa ( and he leaves them)
Amanda responds: You’re scuse!  as Lee steers Amanda away.. LOL! What a cute line of Amanda’s!

Amanda: I didn’t do anything! 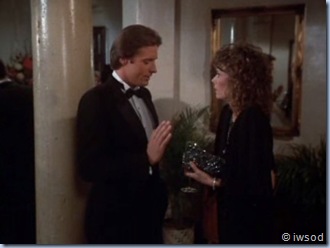 * Here, I think Lee didn’t like it.. and doesn’t know why he didn’t like it! My theory is-  I think Lee is frustrated by Amanda’s attractiveness – Men hit on her during a job! ugh…. worse? – Lee is attracted to her and distracted by her too- (All these annoying feelings about random men approaching Amanda..) and he really doesn’t want to be!!! (I think this is why he needs Billy to tell him to use Amanda – rather than him volunteering to use her! ) thoughts anyone?

‘this isn’t a social occasion’  Lee?? haaa!! It is a party! (No cha cha?) Interesting that Lee thinks Amanda could be trying to pick up.. a few episodes ago he never would have thought that…(before Delano maybe – you would think her meeting him would be on his mind..  eek!!  I think this could also mean that he sees that she is a woman with desires of her own.. ( who has had fantasies about secret agents 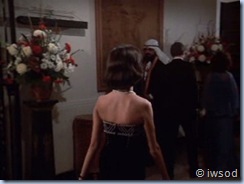 Then..suddenly he spots the woman they are meeting ( How did he know it was her.. ???

I thought he only had a vague description.. does he know what she looks like? I guess the plan was she would go to the ladies at 9 o’clock – but she hadn’t made it to the ladies yet when he says that’s her! I have no idea.. )

Whooo action time! Lee tells Amanda she must move fast, head to the ladies room and say- but .. he gets cut off by a little social occasion of his own

a blonde approaches errrrrrrrr I mean hunts down Lee.(He looks

very annoyed for a split second here but covers it!)
Phyllis: I thought I’d find you here. ( ugh) 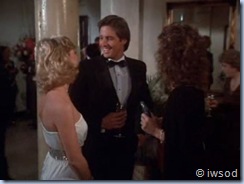 Lee: “Ahhh..Phyllis!” he seems to be surprised

and impressed with himself that he remembered her name..Smooth.. Haaa!! 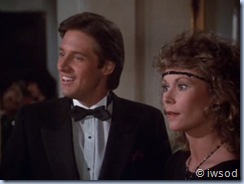 Phyllis: I’m back from Gstaad, you usually 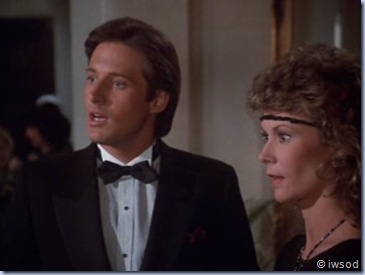 Yuck! If you have to remind him to send flowers, he doesn’t want to send them.. and sooo you don’t want them!! Amanda seems completely non threatened by her don’t you think? she just wants her to go!! I bet she is thinking Lee’s women are ridiculous!!! I know I would be.. Don’t the writers know of anywhere else in Europe to go skiing?? !!! Amanda could have said, nooo you aren’t back from Gstaad I know for a fact the skiing there has been lousy this year!!! and that little bit of weather nearly got me killed!! Get away with yer Phyllis!

Ohhh I just love how when Lee is responding to this saying “first thing in the morning. ” –

– Amanda is very obviously rolling her eyes at this woman reminding him for flowers- ugh!!!. you go girl!

Finally Lee finds his manners .. and introduces Amanda to Phyllis.. Lee tells her Amanda has just

recovered from a bad bout of Dengue Fever! talk about Random Lee!! (Amanda reacts as if to say – HUH??!!) Phyllis doesn’t look like she buys it either.. and just smiles half heartedly, finally gets a clue and says

‘ Excuse me’ and wanders off.. man.. these women that Lee knows are doozies!

Phyllis goes up to a man who is already with someone else and ask why he didn’t send flowers?? not classy!!!

At least Amanda’s Lupo guy had the grace to bow out when he realised Amanda was ‘ engaged’.

I do like that this makes Lee look like not quite the smooth operator he would like to appear to be..(lost and found showed us that too!)
This reminds me of the scene in the First Time when Lee is trying to charm Amanda.. and the women come up to him and at that stage we don’t know much about Lee.. he seems to be quite smooth with the ladies and takes it all in his stride.. but here- he flobs it! He doesn’t seem to be as polished as we would have initially thought socially – which I think is great! Too smooth is too false and creepy… and totally unlikeable.. and Lee is likeable!

I love that as soon as Phyllis leaves Amanda says incredulously: Why did you tell her I have dengue fever?!’ – I love that she doesn’t comment on Phyllis… she comments on Lee! and how he didn’t make any sense!

Lee quickly changes the subject and focuses on the business at hand.. Wait!!! No I can’t focus yet!!!! I just realised-  Lee is in a tux???

I guess because there hadn’t been a close up on Lee yet..

I’m going to leave it there and ponder Lee in a tux further.. this really does require some deep contemplation.. ahem..

We will leave Lee and Amanda at the embassy party and re-join them soon! byeee for now and please as always – I am thrilled to hear any thoughts you would like to share