Lee and Amanda take Scotty out for a meal- at what looks like a nice place huh… Amanda is sooooo funny in this scene..I love it!! Oh and the baddies are lurking around somewhere nearby waiting for their moment to pounce! 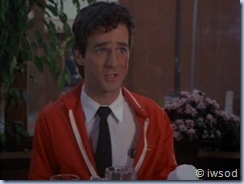 Scotty: Oh, yeah, I knew they were phonies when they took Mrs King’s registration from her wagon.

Amanda: They took my registration?

Don’t you think they look and act like a couple here at this restaurant.. I think so- very much ‘together’ if I was Scotty I would think they were a couple.. All those knowing looks between them, and Lee holding Amanda’s arm to comfort(which reminds me of a 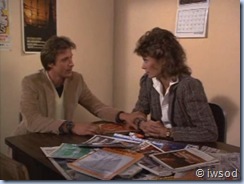 scene in saved by the bells where they are sitting exactly the same way and I think both Amanda even has on the same jacket!) and putting his arm around her to stop her! (Heck, I’d keep repeating ‘they have my registration’ all the time too Amanda! great tactic to get Lee’s arm around you!! Way to go Amanda!!

Scotty: Why would they want my film?

Lee: Except that they never asked that question in a Truffaut film.

Amanda: Why did they take my registration?

Watch this scene through one time just watching Amanda- even when Lee is talking.KJ is so funny!!

ROFL! Lee looks like he is trying not to laugh 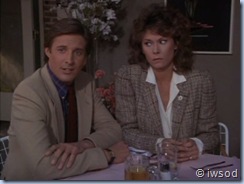 Scotty: Mr Stetson, I think I know what you do at IFF.
Lee: You do?

Scotty: You’re a director, aren’t you?

that after so many years, a man should expect to look like what he is. [insert filmmaking name dropping here 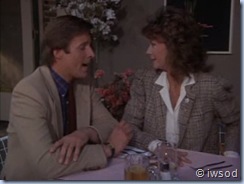 Amanda: I should call home
Lee: You know, Luis knew 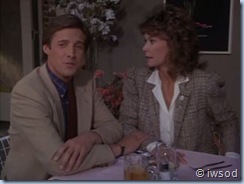 so much about the tricks of the medium. But I’ve always declined awards of

any kind. But then he told me one day, “Awards are for the people who give them.”

And you know, he’s right? I mean, you accept the award and after a few moments, it’s barely a memory. 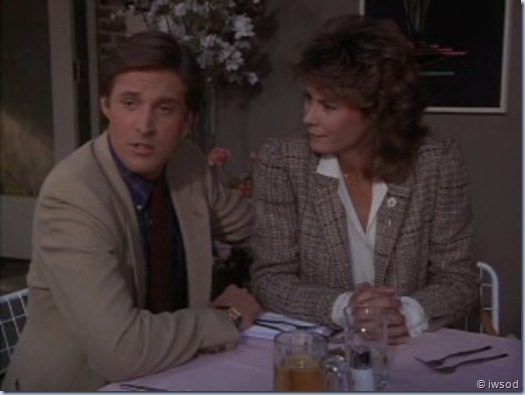 Scotty: Wow!
(Love how Amanda seems to be just looking at Lee working his cover and her expression is: whoa! look at him go!! tee heee..)

Lee: Yeah, well, enough about me. I understand you’re working on a film of your own. Tell me about it.

Amanda: They have my registration.

Amanda here is itching to get out of her seat and call home..sooo funny!! 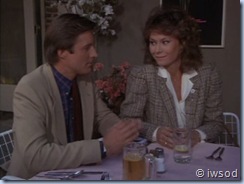 manages to look enthralled.. while keeping one eye on  Amanda to stop her bolting!
Lee leaves the table.. Scotty’s such a little boy ‘He’s going to look at my film!!!’’ Amanda brings him back to earth and tells him to order something little! She’s such a mum!! 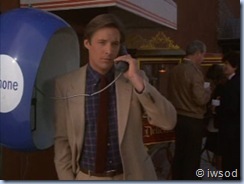 Lee: Yeah, Billy. This is Scarecrow. Everybody in place?
(We see Billy working in his office.) 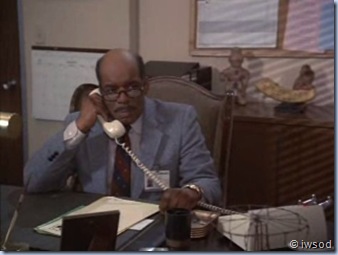 Billy: Since when do you double-check on me?

I can answer that question- all the time!!!! hadn’t you noticed???!!!!Whahahahahaaaa!!
Lee: Billy, those two guys got Amanda’s registration.  (Go Lee! Good Lee!!

)
Billy: The house is surrounded, okay? Nobody’s going to get hurt.
Ahhh Levic (one of the bad guys) sells information.. Ohhh Kaaaay… and that report Raul had is worth $$.. yawn.. but.. got it… Ha!

See in this picture? as Lee re-joins Amanda and Scotty and sits back in his seat we can just see Amanda drinking coffee.. well! that’s Lee’s coffee!

because in the next shot, there’s only one coffee on the table and Lee’s got it!! ( don’t mind swapping spit huh!

Amanda: Well, you’ve been through a terrible experience and I think it would probably be better if

we all just went home.

Scotty: Oh, it’s not that. It’s being here with a director like Mr Stetson.
(someone else fawning over Lee.. only Scotty is so clueless and young and enthusiastic it works!

) Scotty goes to ‘wash up’. Good boy.. (How old do you think the character Scotty is suppose to be? )

Levic: I’ll get the kid, you get the car.
The moment Scotty is away from view Amanda pounces on Lee! He let her stress for a while there.. almost like she should assume he has taken care of it!

Is that what you want Lee? I think he kinda likes it!! 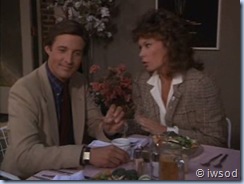 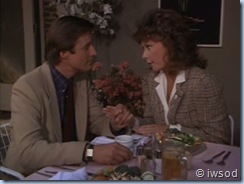 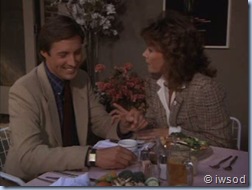 but Phillip and Jamie and my mother are home and 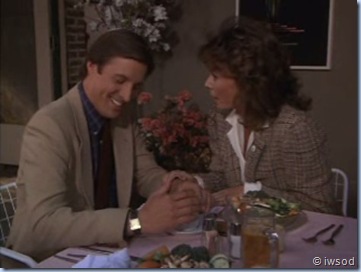 those men have my registration with my address on it. I —

Lee: Amanda. (She stops. Lee faces her.) Your 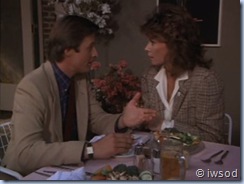 Amanda: Who is surrounding it?
Lee: The good guys, that’s the first phone call I made. 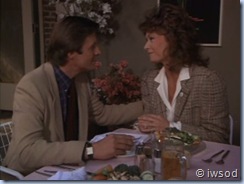 Billy’s got an APB out on the car and you really didn’t want this salad, did you?

(He helps himself to it.)
Amanda: No, I — I don’t like salad. (eh? then why order it?!)
Lee: I didn’t think so.
(He picks up the fork and digs in. Amanda sighs with relief.) Amanda: I feel better now.
Lee: Good.
They’re very very cute here!! I love how Lee can’t help himself and smiles kind of bashfully when Amanda says he is playing a wonderful director.. but while he is smiling away at Amanda’s compliment her panic is rising!! Finally, Lee is able to refocus

he puts her mind at ease about the house being surrounded… she certainly is appreciative.. and.. so Lee is very happy too…(what a change in mood from when they went looking for scotty eh?!)  Lee steals Amanda’s salad and she can’t stop grinning from ear to ear..

Uh oh.. the baddies nab Scotty.. Lee isn’t going to get to eat Amanda’s salad after all. Ohhh poor Amanda.. she tried to drive Lee’s car and help Lee.. PTSB again?? why would you keep trying when you know you can’t do it.. eek.. and Lee gets in the passenger seat and

expects her to drive off? LOL.. she had him fooled for a second there! – At

least she stood up for herself here and told him he wouldn’t have caught them on foot! Go Amanda!!

Bad Lee.. he says to Amanda: you lost them! When he gets in the car.. not her fault Mister!!!! 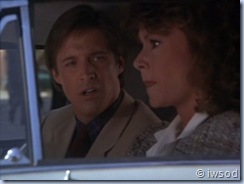 He looks and sounds about 10 years old when he says “noooo!” in response to her question of did he expect to catch them on foot.. booo hooo Lee.. stop taking things out on Amanda.. she liked your director act.. cut her some slack!

Why is Amanda surprised the baddies took Scotty? eh?? PTSB again?! wasn’t she sitting next to Lee and saw the baddies take him? why did she think Lee was running?? [I’m just going to forget about the Oh my gosh that ends this scene.. PTSB.. PTSB… ]

I’ll get to it as soon as I can.. I’m sitting exams in a week so less smk time at the moment –but please share any thoughts!! byee for now..

10 responses to “3/6 Season One, Episode 18: Filming Raul-Scarecrow and Mrs King”