Well! After the little car interlude.. I am no longer interested in this episode!  I will finish up here!

)  Nah.. just kidding- There’s a reference to Lee and Amanda dancing coming up (You’ll see!).. so there’s more goodness worth sticking with the boring gun fights for! 😉

Francine makes the drop, risking her curlers for the greater good.. The plan was: put a tracking device in the cassette, follow the guy to his hideout. Lee said the tracking device is in case they loose visual.. Hmm.. the baddie wrapped the cassette in lead, blocking the signal – so Billy orders they take him.. ?? errr call me crazy but the usual tactic here would be to let the baddie pick it up – and follow him back to the hide out no?? why not follow the guy? .. there’s a lot of shooting that does nothing.. blah blah..

.. Love how the scarecrow gives the baddie a roundhouse kick though.. and the other agent’s swoop in to clean up scarecrow’s the mess!

So, they nab the nameless baddie (Ray Parker Jnr??).. but the whole thing didn’t turn out as they hoped and they’re no closer to finding Raul and Scotty.. Hmm. I guess they didn’t want to take the risk eh.. and thought their interrogation skills would win out in the end.. The baddie explains if he doesn’t return in 1 hour the other baddie will kill Scotty and Raul. Uh oh..

Amanda has stayed in the car throughout the gun fight.. Awh! she opens Lee’s door for him when she sees him coming! .. but Lee is really mad! and seems to get even madder when Amanda points out she stayed in the car! (Not now Amanda!

) I guess it is kind of nice that he is honest with Amanda and feels free to express his frustration at not being able to help Raul and Scotty.. and Amanda seems to realise he is not angry at her.. He slams the steering wheel.. whoa.. talk him down Amanda!

He goes to drive Amanda back to her car- There goes Lee with his crazy swerving of the steering wheel while going straight again.. Amanda’s brain sets to action.. time for her to solve the case and fix Lee’s boo boo and make it better

(err and help Raul and Scotty!) Sure enough.. Amanda manages to think of something no one else thought of.. (In a way no one else would ever think of it too!! haaa..)

Here is a little of Amanda in action!
Amanda: All right. You know . . . if the police were looking for me and I was looking for a place to hide, I would try to find a place that had a secret place. So that when they came to search the place where I was hiding, I could hide in the secret place, and then when they left, I could be pretty sure that they wouldn’t come back.
Lee: Whoa, whoa. Look, I’m having a hard time trying to follow this.  (whahaa!! good patient listening Lee!!

Amanda: Like a subbasement in a warehouse.
Lee: What?
Amanda: See, um . . . well, once I was a tech advisor on a — on a food-growing project. 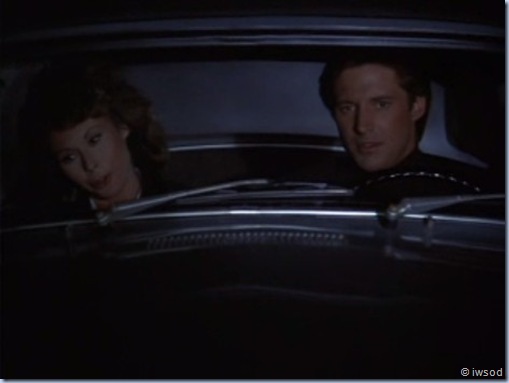 Ahhh and the coincidences just keep on coming.. a tech advisor on Mushrooms!! gee.. does she love mushrooms? Does Lee love mushrooms?? they do now! Lee is suddenly hopeful!!

So he calls Billy and he bluffs Ray Parker Jnr with the mushrooms. I ain’t afraid of no mushrooms! But.. he does want to save his butt – so yeah he makes a deal with Billy ( and Mr generic agent!)- and Jackpot! Amanda’s kookie idea hits paydirt.. 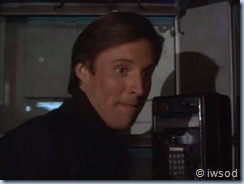 Lee looks like a little boy as Billy gives him the good news on the phone, Lee hangs up on Billy, runs to the car all excited and off he rushes to the warehouses!! too cute!

Lee and Amanda head off to the warehouse district.. though it isn’t really explained how they know which warehouse- did they just drive around till they saw one with a bad guy waiting out the front? tee hee.. and if you are wanting to keep your location secret, why would the baddie wait at the front door- it’s like they put a big sign up saying – here we are!!

Come get your mushrooms!!

With back up on the way, Lee tells Amanda to

stay at the car.. In he goes.. and he finds the baddie literally about to do in both Scotty and Raul- with only seconds to spare he stops the baddie – Hurray! ( and Scotty doesn’t see Lee so IFF’s cover isn’t blown.. way to go!)

Uh oh.. Sooooo we have to sit through another drawn out gun battle.. yawn yawn.. So how do you feel about mushrooms? I looooooove mushrooms… bang bang bang.. yawn… Levic ( I wonder if he loves mushrooms..) runs to his car and turns the key but it won’t start! Lee catches up and holds him at gunpoint.. and the back up conveniently arrives.. oh yawn.. 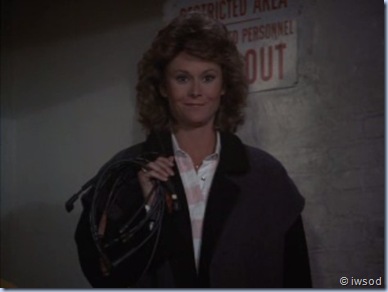 Amanda: Looks like he needs more than that. Looks like I pulled the right wires.
(Ugh!! self -depreciation overload!!!)
Lee laughs when he sees what Amanda has done… ( I guess that is the equivalent of job well done!!) 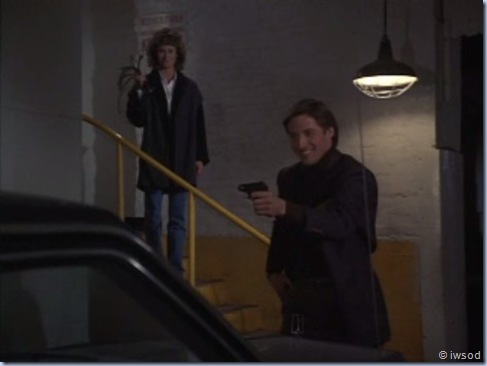 Tag Time! Ohh we see the aerial shot of the street infront of IFF- those women from earlier in the episode are still wandering the streets!! Somebody help those women!

Amanda: See? After all your worrying, everything turned out just fine. (Yes Amanda, you fixed everything!!!) 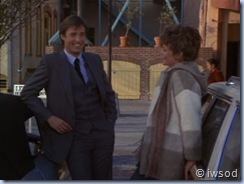 Lee: Yeah.
Amanda: I mean, you got back the report that those two men stole and Scotty’s okay and I even got my station wagon fixed. Boy, that was really nice of Mr Melrose. You know, he didn’t have to do that. It wasn’t the Agency’s fault.
Lee: No, no, no, no, in a roundabout way, it was.
Wait a minute.. there seems to be a bit of confusion over who was responsible for what!!!! Lee got back the report????!!!!! UGH!! Lee and Amanda got back the report!!! Amanda is giving Lee sole credit for work they did together?? and saying Billy didn’t have to get the station wagon fixed? Aie Amanda!!!! grrrrr…

Scotty, all excited comes running over to Lee and Amanda to fill them in on what happened- but first and more importantly he asks Lee what he thought of his film! LOL!!
Amanda: Hi, Scotty. How are you feeling?
Scotty: Well, I’ll tell you as soon as Mr Stetson tells me what he thought of my film.
Lee: Oh, yes, uh, your film. Well, we looked at it — every frame of it — and, uh . . . it’s very good. 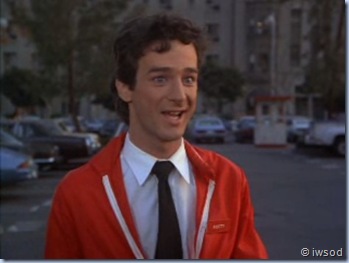 Scotty: It is?
Lee: Yup.
Scotty: Wow! I wish I had gotten a couple reels of what went down the other night. How about that, me in the middle of a 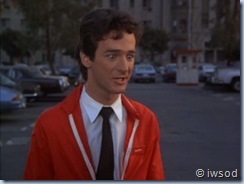 major shootout with feds running all over the place? It’s a good thing 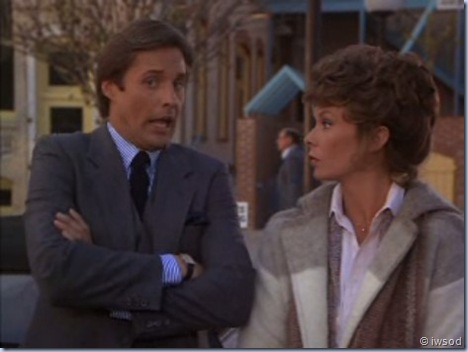 Both in unison: They have their ways.

I LOVE this moment- as they both say together ‘they have they’re ways’!!! Why??? Doesn’t it sound familiar to you??
From The First Time ( https://justwalkwithme.com/2011/11/27/season-1-episode-1-the-first-time/  )
Amanda cuts into the dancing atmosphere saying: How did you find me?

Lee: we have our ways 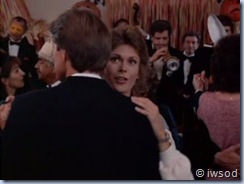 Amanda: I thought only nazis and spies say that.

By revisiting this moment- and saying it in unison, I think it is a great way to show how far the two of them have come.. and that while Lee doesn’t say the words, or maybe even realise it yet – they are in this caper together now!! Amanda is no longer outside looking in

and knows exactly what Lee is now

Well done smk writers I love it!! (Plus any reference back to when they are dancing in The First Time- is alright with me!!)

I also love how as Lee talks to Scotty, he keeps looking to Amanda to back him up.. or give him some help.. pha!!! Scotty needs PR308’s?? you know he will go away and try and find out what they are.. and he will discover Lee is making it up.. that is kinda silly isn’t??!!  But, in the end we see Lee’s soft side..

Scotty is so sad when he finds out about the PR308’s he didn’t get!!
I love how Amanda says to Lee: did you see his little face it just crumpled!   -awh.. 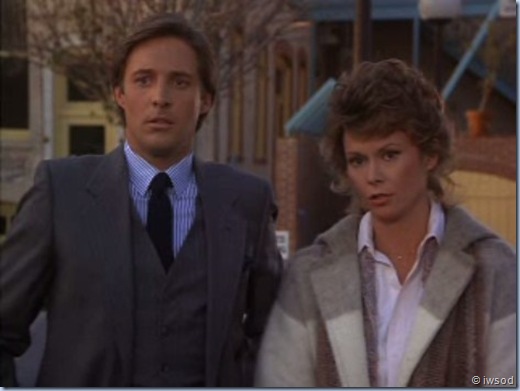 Lee offers Scotty a job.. without quite realising he has done it!! He just can’t help but do something to make amends with Scotty for all he went through! (In my view so he should- Scotty got beaten, kidnapped and nearly killed over IFF and he doesn’t even know they exist!! )

Scotty is soooo excited to get a job.. and Lee is almost as excited to have made him happy- Amanda too.. she watches all this take place and is so happy too! It isn’t until she points out that he just offered someone a job and he didn’t really mean it when he said he wouldn’t get anyone else a job anymore because he couldn’t stand the guilt!! yeah it lasted about 2 minutes.. and Lee was surprised he did it too!! I don’t think Amanda was surprised, I think that is what she was quietly encouraging Lee towards in her way..
Amanda: You see, I knew you didn’t mean it.
Lee: Mean what?
Amanda: Oh, all that stuff about never helping a friend get a job again. 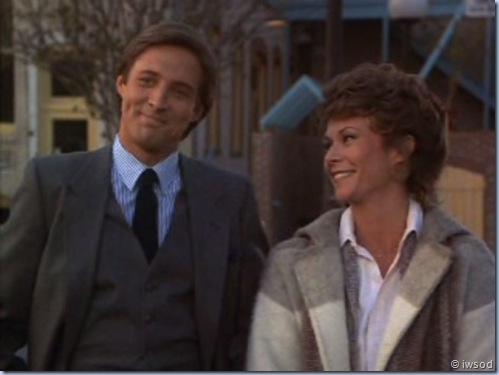 This episode has some great moments:
-funny: they have my registration!! I LOVE mushrooms!!
-some very hooo haaa moments: ‘yes this is much more natural’… –
and some sweet moments – ‘come on Amanda your going to be alright, your protected by the best!‘ and ‘your house is surrounded..it was the first call I made‘ )

Though it is not a favourite, top 20 maybe. I found Lee was more reasonable than last week in the artful dodger ( but that is measuring by a pretty low standard!) – but there was lots of blaming Amanda for things that are simply not her fault, and taking his anger out on her when it had zero to do with her and giving her no credit for basically solving the case.. and stopping the bad guy (other than a smile- but ohhh what smile eh?? so how can I complain?!) oh and- Amanda stayed in the car for once – surely that deserves a medal?!

Oh and the appearance of scatterbrained Amanda a few times and excessive self depreciation brought down the enjoyment factor on this one for me.. not much.. but enough that I wouldn’t say its a favourite.. OH and the mysterious car park that revealed itself from another dimension… was a stretch for me..

It’s something I think they changed in later smk.. they had to have the head baddie and we had to know what the information is pertaining to. When we just want to see the good guys catch the bad guys and Lee and Amanda-you know?? !!

Any thoughts you’d like to share? What did you think of this episode? favourite moments?? least favourite moments?? things you wished you had seen in this episode?? What did you think of the magical car park?? did it not bug you?! Any questions?? Feel free to share whatever thoughts you like.. if you agree, disagree or don’t care about something, anything! haaaa.. well must go! looking forward to some fearless Dotty!! byeeee

13 responses to “6/6 Season One, Episode 18:Filming Raul-Scarecrow and Mrs King”