2/10 Season Two, Episode 7: Our Man in Tegernsee-Scarecrow and Mrs King

Lee and Amanda exit the police station ( ETA: In reality this isn’t a police station-it is the Munich Residenz (in Max Joseph Platz, number 11 on Claudia’s guide)- a former royal palace – my.. fancy for the police!! The whole precinct is on the take! 😉  )
Amanda can’t believe it, she spent a night in Jail ( yeah try that Lee- you and your comfy TWA flight! ugh!!) Lee has his arm around Amanda guiding her through the crowd but he is otherwise not being supportive (yet!). Amanda asks how long she should tell her mother she will be in Germany.

Lee responds:  Amanda, this thing goes way beyond that 20 you slipped the shopkeeper.

ugh! Lee!!! I’m so glad Amanda doesn’t let Lee get away with that![Lee shifts to walk on the other side of Amanda..] 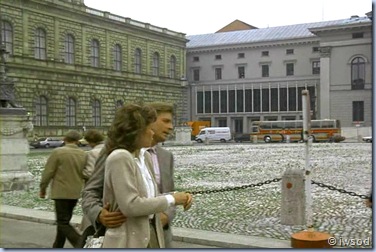 Amanda: I did not slip the shopkeeper a 20! I tried to buy a present!
Lee lets out a big sigh.. he has no response for that.. yep.. Amanda didn’t do anything! this is not her fault! soooo you can’t be mad at her Lee!!

I think the way Lee has his arm around her like that guiding her through the crowd eases her temper.. it would certainly ease mine and she has every right to be cranky with his insinuation! He hasn’t even asked her what happened yet! ugh!! but.. they are walking awfully close to each other here.. touchy touchy!

]
Suddenly a policeman calls out ‘Frau King!!!’
He comes running towards Lee and Amanda. I could never quite put my finger on what they were trying to do with this character in this episode.. but now I have read the script I am surprised I didn’t see the connection.. The script describes this Leutnant Volkenauer as follows: “Volkenauer  is in his late thirties, attractive (in a disarmingly rumpled way). His manner is polite, even diffident, but we sense a keen intelligence behind it. He is something  of a Leutenant Columbo.”
Rofl! I love that!! Lt Columbo is one of my all time favourite police detectives!! And the reference to ‘ just one more question’ in this episode a few times now makes perfect sense!

tee hee.. though Columbo had Italian not German heritage

These things amuse me!

Any other columbo fans?

[ETA: we see here behind Amanda and Lee the Grand Residenztheatre, Number 11 on Claudia’s map! ]Anyway, getting back to the actual episode! Lt Volkenauer runs up to Lee and Amanda all smiles
Amanda quietly: Oh noo.. 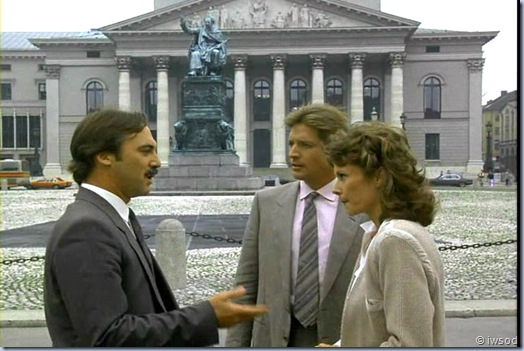 Lt Volkenauer ( or should I call him columbo?

): Frau King, my apologies! Lieutenant Dieter Volkenauer.  After introducing himself, he pauses smiles at Amanda, and at Lee who is looking very sternly at him! tee hee..

Lee’s so protective of Amanda

Lol! we can see Lee literally sizing Volkenauer up! Amanda smiles back. 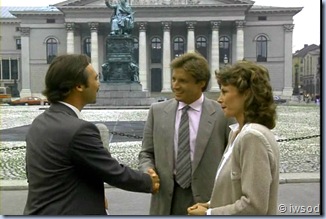 Lee hesitates for a moment and then snaps out of whatever it was he was thinking introducing himself back.. he says he is a friend of Frau King..They shake hands.

Lt Volkenauer: yes, I was told
I love it.. a little power struggle going on here between these two.. Lee introduces

himself only to find Volkenauer already knows who he is – he’s not stupid he’s just being polite.. ha! He makes Lee uneasy!

Volkenauer explains there is a question, a slight confusion…  “Who is Hymie?”
(Isn’t he that robot from Get Smart?!).. 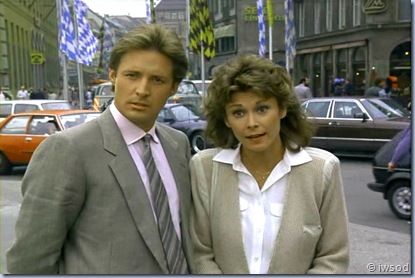 Love the looks of confusion from Lee and Amanda here! hehehe.. they share a look at each other both confused over who Hymie could possibly be.. it turns out Hymie is Jamie though

( love the ‘stick that in your pipe and smoke it’ look that Lee gives Volkenauer once Amanda explains who Hymie is!! teee heeee!) 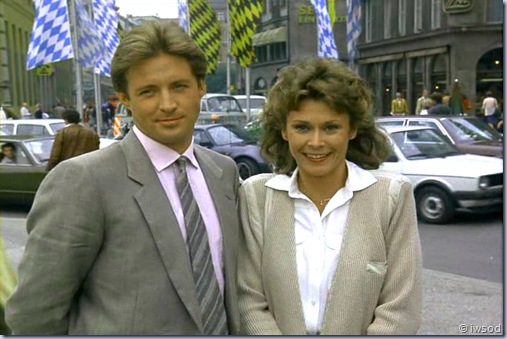 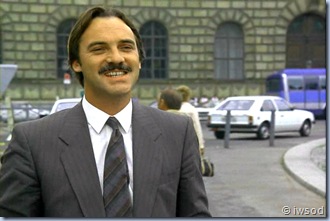 Volkenauer: Your sons! Of Course! I shall make a note of that!

Check out Lee here.. he’s all machismo!!  (Could he and Amanda be standing any closer to each other here?) 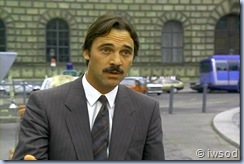 Volkenauer (very nicely): Now, should any other questions arise you will be available?

Lee: Well, since you have her passport that’s a rather academic question don’t you think? [play nice Lee! Way to go Mr Patience and Control!  ]

Amanda gestures to him to stop it.. she maintains the nice smiles.. no need to get Volkenauer cranky.. and he is being very polite! 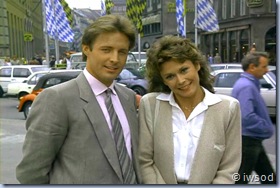 Volkenauer: thank you Frau King. I hope you enjoy your stay in Munchen. [Amanda is just waiting for Lee to make a narky

[I think Volkenauer is also being extra nice to annoy Lee – just a guess!]

Lee doesn’t disappoint: How can she miss! 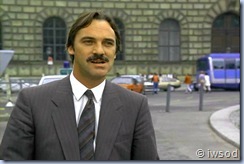 Volkenauer sees Lee’s cranky.. but doesn’t respond. He gives Amanda a smile and leaves them. At 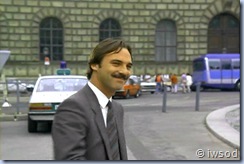 least Volkenauer was being nice about it all..The guy is just trying to do his job!  Amanda responds to nice

Lee I think gets infuriated by it

Love how as he walks off Lee and Amanda exchange a look – Amanda giving him a glare of thanks for ‘helping’!! 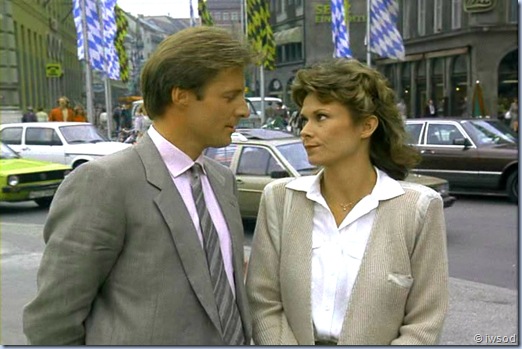 Lee was being a bit rude to Volkenauer who Amanda was wanting to co-operate with, and who was actually being quite nice to Amanda! How ironic, the man who arrests her and takes her passport, is much nicer to Amanda so far, than the man who flew half way around the world to get her out of jail and errr ‘help’ her!! hehehee..

The scene at the phone booth is funny, Amanda yelling

half way across the strasse!! hehehee.. and Lee looking a

I love how both Lee and Amanda realise the crowd have

all turned to watch and both in unison smile at the crowd – all is well!

Dotty doesn’t really hear what Amanda is saying.. and it’s probably all for the best. Amanda wanted her family to know what was happening to her.. but it would have worried Dotty to know.. Lee doesn’t think she should have called home..but Lee Amanda is looking for some comfort and reassurance – and well, she isn’t getting any from you so far!

[ETA: the cafe is Number 12 on Claudia’s locations guide.. -Restaurant ‘Spatenhaus an der Oper’ in Max Joseph Platz.. -thanks Claudia! man I want to go there!! ]

I’ll leave it there for the moment!!byeeeeeee thanks for reading!!!

13 responses to “2/10 Season Two, Episode 7: Our Man in Tegernsee-Scarecrow and Mrs King”