3/10 Season Two, Episode 7: Our man in Tegernsee-Scarecrow and Mrs King

Lee and Amanda head over to the cafe to sit and talk..
Lee is touching Amanda an awful lot so far in this episode huh!

Maybe he is trying to comfort her – but he isn’t wanting to say it with words??.. 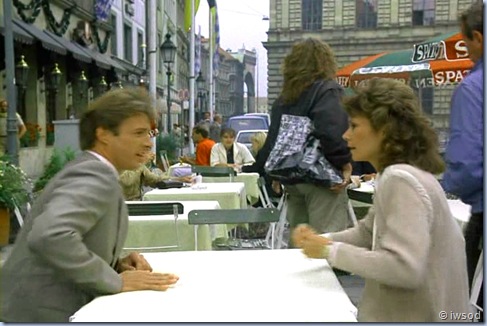 See the lady with the bag behind them? I had to laugh.. I think that is Humphrey Bogart on her shopping bag there! In Munich! (reminds me of the DOA: Delirious on Arrival scene where Amanda imagines her and Lee always remembering Arlington

Though I am shocked it isn’t Bob Dylan! someone is slipping!

Lee explains going home is going to be a problem, because lots of counterfeit American 20s have been showing up all over Munich. I love that their hands are so close on the table – kind of like they both subconsciously want to reach out to the other but they know they can’t! ( boy can I read something into anything or what!

It is kind of obvious that Amanda just happened to be given the counterfeit $$- so find out where she changed her currency and then you find your bad guy.. but.. I guess as the episode progresses and things begin to happen – things will look a little more incriminating for Amanda! As I mentioned in the comments of post 2 – I wonder if Lee showing up to bail out a housewife from Arlington looks suspicious!

Anyway..  Amanda tells Lee exactly what happened.. not that he asked..

Amanda: I was on my way to the airport and I decided to do a little last minute

shopping. So I stopped into a little antique store and bought a tiny little bisque figurine for mother. [Love Lee’s look here of get to the 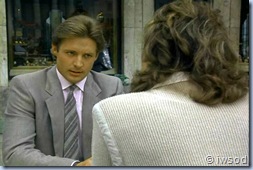 point- but he bites his tongue- hurray! progress!!] Now that was before I went to the train shop and that was 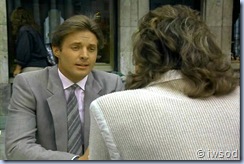 where the man changed my marks for dollars. [the script actually has this scene Amanda is describing as opening the episode!]

.. I don’t know why he won’t admit it!
LOL..Oh Amanda! It is obvious why not!! but then.. the police would know this too- they are not dummies!

Amanda: you know, I was so excited about coming to Europe as a courier. All I had to do was just deliver an envelope for Mr Melrose and I get this

nice, free trip and.. well I did that and that was no problem.  The problem came afterwards. Well, I guess there are a lot of couriers.

Amanda: So this probably happens a lot [Amanda is all smiles – trying to make herself feel better! tee hee]
Lee is straight down the line: Never in recorded history!

because you are my responsibility 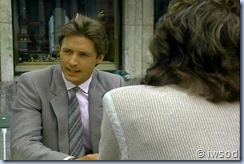 [ Ahhh! IMHO  even if she had not been released into his custody- he would have said the same thing.. ] 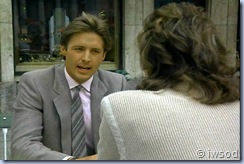 .. I hate to be anyone’s responsibility.
Poor Amanda! This is not her fault! Lee doesn’t address it though, he side steps this and gets down to business.. 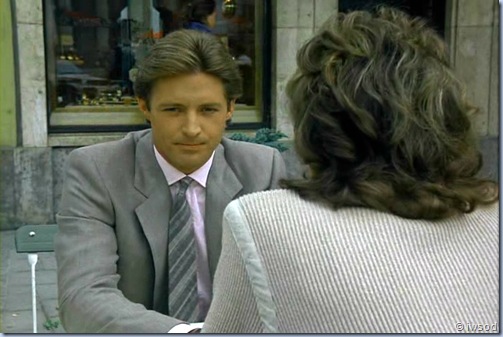 Lee: you know, I remember what they said back at the station.

If there’s a lot of counterfeit floating around Munich..and an ongoing investigation..I’ll bet Harry knows something about it. He doesn’t miss a hell of a lot.

Amanda: Who’s Harry?
Lee: Harry Hollinger. Our man in Tegernsee. [whooo they spoke the title in this episode too! just like they did in Brunettes.. I like it! ]…that’s a resort area about 45 minutes outside of town.
Amanda: you think he might know something?
Lee: If anybody does, he will. Ha, he’s one of our top operatives. He’s quick, sure, thorough, he’s a real pro. I’ve spent a couple of years with him….. Amanda, I think I’m seeing a little bit of light at the end of the tunnel! We’ll spend the night in Tegernsee with Harry. He’ll have a few answers… Hmm?!!

Doesn’t Lee look gorgeous at the outdoor cafe? ahhh… One chat with Harry and apparently everything will be fixed! You know.. everything Lee says about Harry turns out to be true – only not in the way we all imagine!!

Our (subtle) introduction to Harry:

Well we get an idea of this Harry guy’s character straight away.. big boozer huh..when asked if he wanted another drink, Harry just takes the bottle.. We see Lee and Amanda arrive.

Lee sees Harry.. a fleeting look of concern on his face as he sees spots what Harry is up to before he sees Lee..

Lee’s momentary concern is brushed aside as Harry notices Lee standing there. 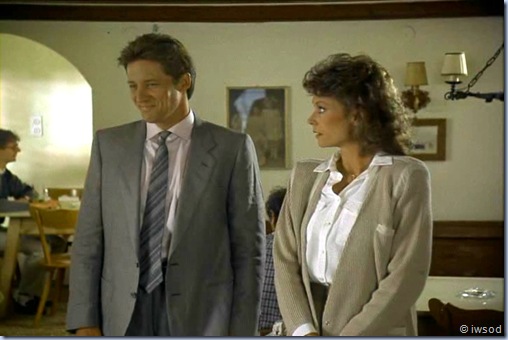 whoa! That smile is soooo wonderful to see!!! and such a weapon of mass distraction!!!

I love to see Lee smile like that (when I am not too dizzy and can focus clearly! )
Harry: Lee?
Lee: Harry.
Harry: Noooo it can’t be!!!
Lee: Yes it is!!!!
Awhhhhh A joyous reunion takes place! 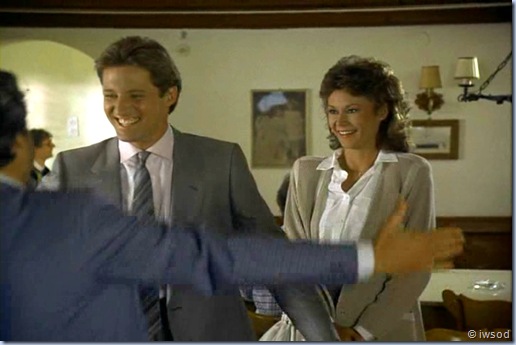 Harry is a good friend.. and it makes what’s coming rather sad!

At least Lee has the best friend of all by his side!! Amanda

This is not a colleague hug.. this is a best buds man hug!! Love the huge slaps Lee gives him on the back!! haaa!!! 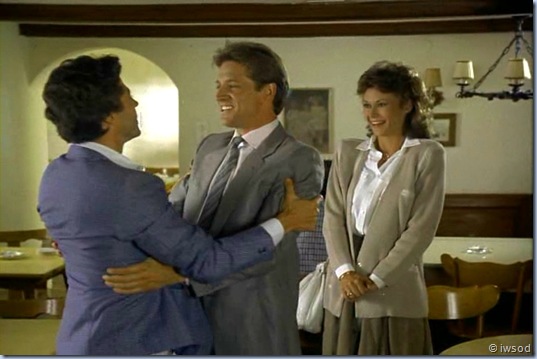 Kind of sweet to see Lee be so happy to see Harry.. and to see this side of Lee..
Lee: Ohhhhhh it is good to see you!
Harry: Good? It’s incredible!   [I think this is the first real smile Lee’s cracked all episode! I also love to watch Amanda take it all in – paying special attention to Lee and enjoying his affection for Harry. Awh!!]
Harry: Ah what are you doing in Tegernsee, aren’t you still 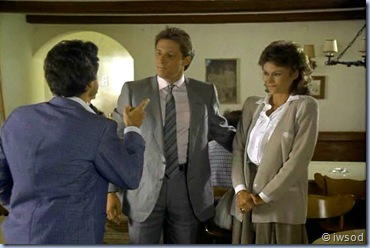 stationed down at DC? [Lee looks back at Amanda and moves back to her side.. ].. Got it! You’re the bearer of glad tidings I’m being recalled!
Lee: no. no it’s just a visit.
Harry notices Amanda.. and asks her: are you visiting too?

Amanda: ohh  [Lee and Amanda exchange a look] sort of

Lee: Ohh ah this is Amanda King err.. ( Lee does a handwave! Hmm what’s the word to describe Amanda?? errr….. ) an associate. 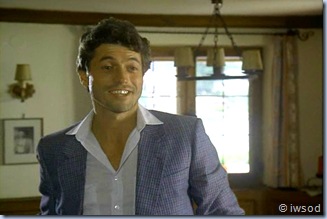 He gives Amanda a look up and down.. and says to
Lee: I see old Billy’s tastes have taken a decided turn for the better!
[Call me crazy but I hate that Line!! especially after last week’s episode.. describing her boss’  taste? ech!! oh .. hey! Meet this associate! Oh yeah she’s a babe!! err she’s standing right there! Maybe it’s a sign of the times but this to me is cringeworthy and not charming at all! Lee and Amanda don’t seem to mind though. UGH!!! they seem to just smile quietly in response, though sincerely.. ] 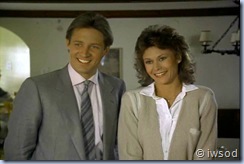 Iwsod’s dream dialogue to be inserted here->
“Amanda: err someone kidnapped me and tried to sell me into sex slavery last week because of their ‘taste’ so keep your sexist comments to yourself!
Lee: Yeah- Pal!”
Ahhh I feel better now.. thanks for letting me get that out!

Back to the actual episode! Whoooo Harry continues: So how long are you two staying? as far as I’m concerned the longer the better. 😉 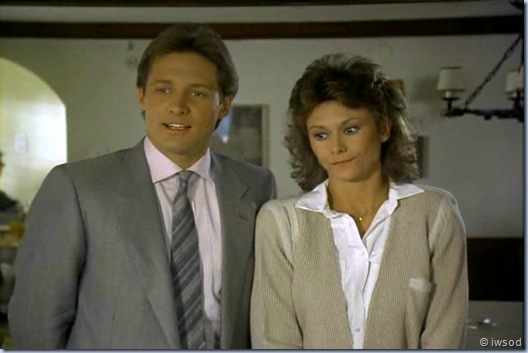 [eww I think Amanda doesn’t like this come on! He just crossed a line with her.. and Lee’s smiles begins to wane..] My schloss is your schloss.
Uh oh… Harry wants to leave Tegernsee.. Last time Harry and Lee saw each other: Port Said! [I had to look it up.. it’s in Egypt!

] Harry thinks this reunion calls for a drink.. but Lee hesitates pointing out it’s a bit early.. 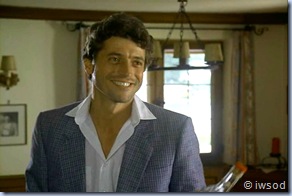 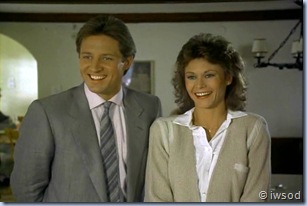 Lee responds: what are you talkin about man? I never had any respect for you anyway! ( awhh.. so sad! It is clear that Lee did have respect for Harry.. especially given his glowing description to Amanda of how helpful Harry would be.. ) but Lee puts on a brave face here.. 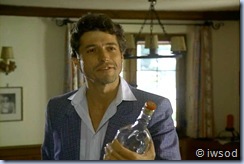 Everyone has a laugh, wanting to deny the bad feeling their beginning to have! Harry suggests they solve their problems with Pear Schnapps..
Lee: ahhh Not the problem I brought with me ( he says looking at Amanda!- Also: interesting to note the script says ‘not the problem we brought with us’ an interesting difference.. Lee is very much in ‘I am the pro, the agent and Amanda is the civilian who sometimes helps out the agency’ mode! )

[What…a… smile…… ]
Harry settles his account while Lee and Amanda make their way outside to wait for Harry….

I shall leave it there for now.. What do you think of Harry? Any other insights? thoughts? comments you’d like to share? I look forward to hearing from you!!thanks for reading byeeeeee

21 responses to “3/10 Season Two, Episode 7: Our man in Tegernsee-Scarecrow and Mrs King”