6/10 Season Two, Episode 7: Our Man in Tegernsee-Scarecrow and Mrs King

not a good look!
Harry inserts that thanks to the Schnapps he didn’t notice these divers had been there for six weeks.. Uhhhh huuhhhhhhh… The younger diver speaks to the other in german, and Lee responds – it’s clear he understands what they are saying.. the script says the younger diver says not to tell them anything (in German), Lee responds they are not competition..

Then the two divers speak some more in German.. and Harry notes they mentioned Old Gunter – this is weird.. the divers don’t want to tell them anything. so they speak in german, Lee demonstrates he understands german, so the divers continue to speak in german and give away information? Weird! anyone like to translate?? I imagine it is similar to what the script says.. but it is pretty non-eventfu so I’ll move on..

Lee asks Harry who Gunter is.. Harry knows- says he’s a local historian sort of thing.. bit of a legend – why 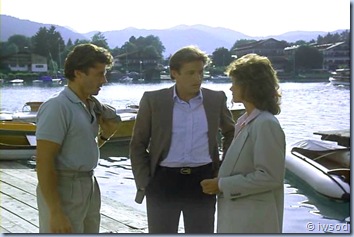 didn’t Harry suggest speaking to him? Hmm because he’s a baddie I guess! On to see Old Gunter! ( what a shame Harry didn’t just say hmm maybe old Gunter knows something.. the scene didn’t give us much except the cringeworthy pun on the outfit!  )
Awh!! As they walk over the hills Lee grabs Amanda’s arm in preparation for walking off the path…

and to help her not  lose her footing.. eventually they end up holding hands for a moment- Awh!!  Mean Lee from the opening scene is loooong gone!!! And I suspect.. any thoughts about Gillian! Who needs the poconos when you can have alps. ( Bavarian alps 😉 ) 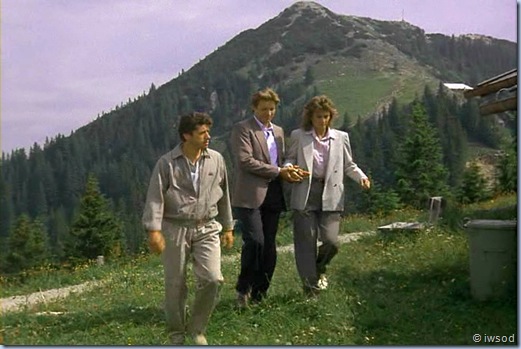 (I notice Amanda has switched shoes yet again! down talking to the divers she had on heels.. here again she has on her sneakers! Aie! Just stick with the sneakers already!

Actually I would have gone with the heels for the whole episode, so Lee could ummm stay real close….steady me…and ensure I don’t lose my footing

throughout the whooooole episode!

I’m very annoyed that Harry is in the frame – it would have been a gorgeous pic having Lee and Amanda holding hands in the alps ( Bavarian Alps!

Amanda thinks Gunter will welcome some company.. LOL! Gunter just walks straight past them and ignores them! Gunter complains in german too many people have been coming by – Lee translates this.. Not Harry! Harry thinks they won’t get anything from him.. Uhhhh huhhhhhh!!! ( Dirty Harry hopes that is the case! ) 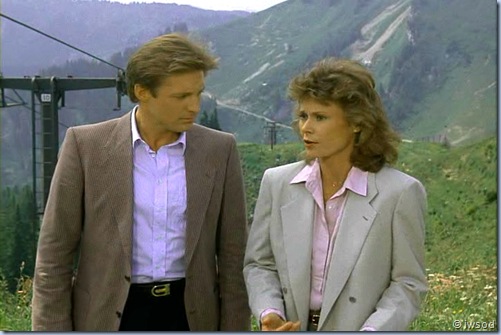 I love that Amanda speaks up here in response to Harry’s negativity: Harry! Does he know how important this is? I mean if he doesn’t speak to us, I’m not going to be able to go home!
Go Amanda!!!!

Gunter speaks English.. so Amanda’s heartfelt pleas are understood ( in smkworld- Amanda’s warm heart turns anyone into an english speaker

) Lee directly asks him about the Nazi Loot..

This is probably really random.. but.. I LOVE this picture of Lee.. Why? Look at his hands!!

So.. they find out about Mueller (the shooter), knowing about the plates. Lee asks Harry if he knows him.
Harry responds: no but if he’s local I can get a line on him.
Lee simply responds with: hmmm.. [ IMO he doesn’t sound excited at Harry being able to help

Love how there’s a public phone up where Gunter lives.. hey if you want people to stop coming by take that thing out! LOL!
Harry hangs up.. he’s got a location on Mueller!
Lee doesn’t hide his surprise at Harry’s efficiency!: Wow! that was quick! [ Yes Lee.. for once it was no problem, Harry found Mueller because he’s a liability, and it’s time to take him out and support Harry’s cover as a good guy.. ]

How pretty is this location where they walk as Harry fills Lee and Amanda in on Mueller.. Ohh I see the baddie’s plan is to lay the blame solely on Mueller: the local milk man.. Amanda challenges this! Go Amanda.. Lee just silently takes it all in.. (now everyone’s hands are in their pockets! It looks cold up there!! )

Amanda: But a milkman?
Harry: why do you keep saying that Amanda?
Amanda: I don’t know it just doesn’t seem right, it doesn’t seem like a milkman would know anything about counterfeiting. Wouldn’t you have to have special paper and special ink.
ROFL! Harry has no answer.. he just mumbles to Lee: I thought you said she was a civilian!! [ Ohhh that is sweeeeeeeet! even coming from dirty harry! yeah Lee!!!

Lee: errr.. ahhhh… yeah. Yeah she err is..
Teee heeeee!!!I wanted to see Lee’s face here!!!  [yup.. this is not his partner he is talking about here.. further confirmation for me that this is before Brunettes are in! Suffer Lee!

tee hee..] The script has an interesting description here for Lee: “Lee has been looking at Amanda, not allowing himself to appear impressed” – I like it.. sums it up perfectly!

I tend to think Lee was being silent here and not questioning Harry because he already suspects him, and is wondering where Harry is headed with all this ( maybe, just maybe, Lee is hoping Harry will turn out to be a good guy after all – and that his friend can be redeemed.. This is all so sad! )

I thought Muller was the antique dealer.. but I guess I got that wrong.. he’s the milkman?..(how did the milkman give Amanda the fake $$?Anyone? the baddie from paraguay early guessed he passed the on to a waitress or something.. maybe  he spent up big in Munich and just entered the population, eventually finding Amanda.. hmm… I don’t know!  )

Ok well I shall leave it there.. I’ll be back with more as soon as I am able.. but I imagine I won’t be able to post as often this coming week, or respond to comments as often sorry – so feel free to discuss amongst yourselves! As always I will be monitoring the blog and will respond soon!! byeeee

6 responses to “6/10 Season Two, Episode 7: Our Man in Tegernsee-Scarecrow and Mrs King”