They make their way to a park to talk with Yuri safely – the same park that was at the end of Dead Ringer!

Well, it’s time to lay out the plot!

Yuri: perhaps I should start by saying in our country, there are extremists.
Lee: no kiddin [Lee!! you are not helping!!]
Yuri: as there are in yours. One of these extremists is field marshall Ilya Kreschenko.

[Is that a bullet hole over Yuri’s left shoulder there?? maybe it’s left over from the gun fight in Dead Ringer! Could this be a set and not a real playground? anyone know? It seems to come and go in this scene, but I’m not sure if that’s just the different camera angles.. ]
Lee: Kreschenko? Yeah, I’ve heard of him. [haaa!!! Yeah of course you have Lee!!

] He’s been advocating a first strike against this country for years. 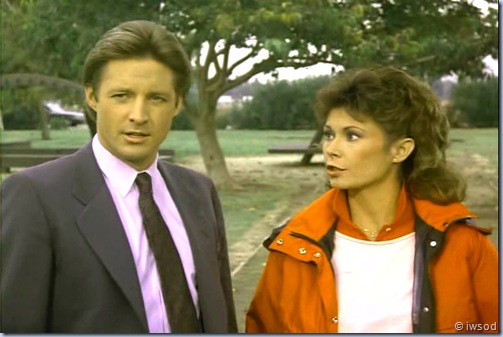 Lee: yeah.
Yuri: He felt we were losing the technological race, that we could win a war now, but not in the years ahead. Unfortunately, as Chief comminform adviser he had access to all our technology.
Lee: ‘had’ access?
Yuri: Kreschenko is in your country now, with two of his aides, Vassily Barkhov and Anatoli Ulanovsky. That is the problem.

[The moment these names are mentioned.. we can see that Amanda’s mind is beginning to tick over here..though she stays silent.. ]
Lee: we have thousands of agents here. What makes these a particular problem?

Yuri: Barkhov is a computer and communications specialist. And Ulanovsky is a genius in advanced weaponry… 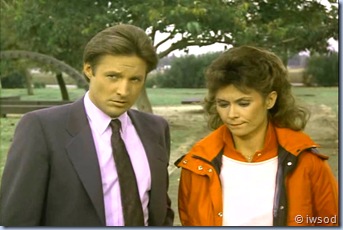 At this, Lee reacts.. uh oh.. we really do have a problem here!
Yuri continues: ..Field marshall Kreschenko has made himself an outlaw in his own country by coming here. He wouldn’t do so unless he had some kind of a plan. And what that plan is, is what we must find out. 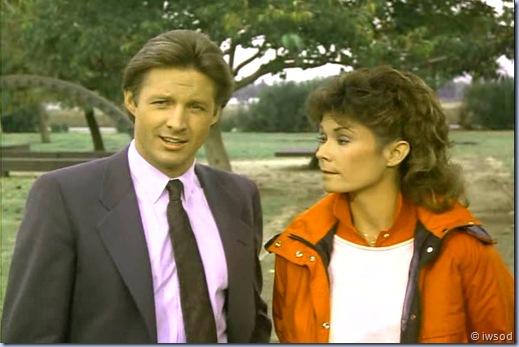 Yuri: through the lady. 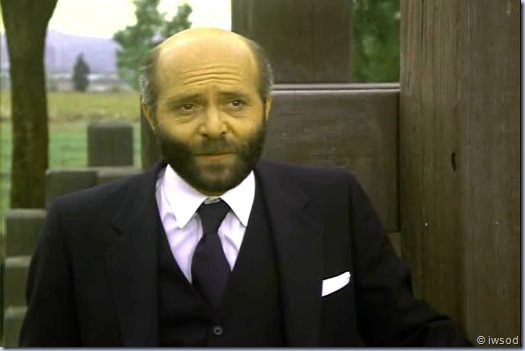 Wow!! What a moment!!! Amanda reacts quickly and obviously at this revelation. 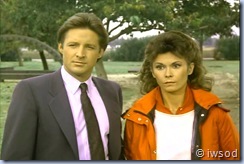 Lee, in front of an enemy doesn’t react as obviously..he doesn’t show anything on his face at all [a dead giveaway that he is reacting but doesn’t want to show it

] but he gives Amanda a slow thoughtful look – up and down! 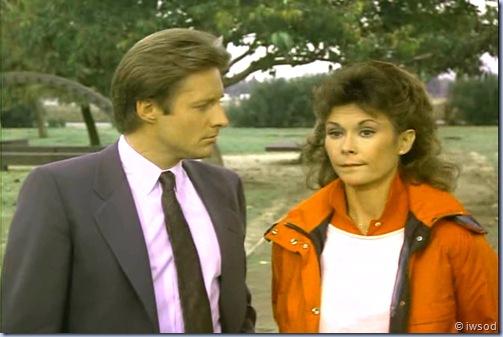 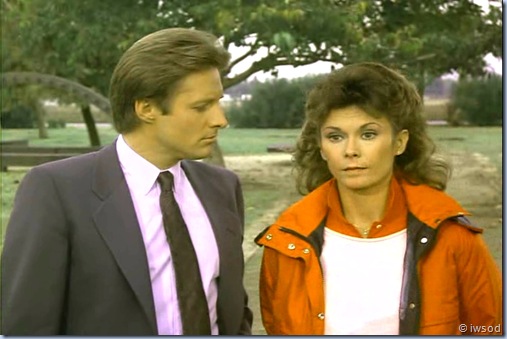 ….Let’s come back to this little revelation later!

Yuri continues: … she has been observed in your company on a number of occasions. I followed her through some dead ends until I found you.

At this, we cut to the wide shot.. to see Lee’s fingers are playing around in his pockets again – tee hee! I think it means he is thinking a million miles a minute..

Amanda asks to talk to Lee for a moment in private.. and he obliges.. they put a little distance between themselves and Yuri.. Love the smile Amanda gives Yuri as she steers Lee away a moment! 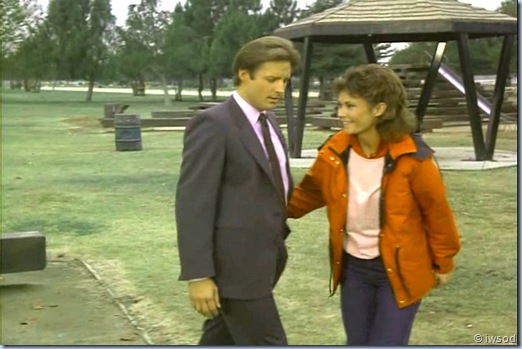 Lee: What?
Amanda: I think I remember transcribing some wiretaps of conversations between Barkhov and Ulanovsky.

Lee’s mind is ticking over.. I bet his hand in his pocket is busy

fidgeting away.. Watch his hands in this next little exchange.. very swoony!!

Lee looks down at Amanda’s hands and responds..
Lee: alright… 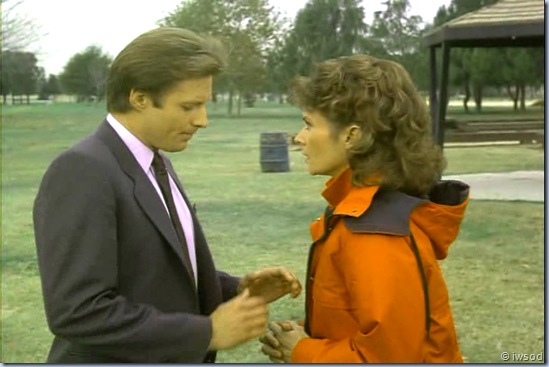 Lee brings up his hands as if to grab Amanda’s hands, then he seems to stop himself from reaching for her hands.. 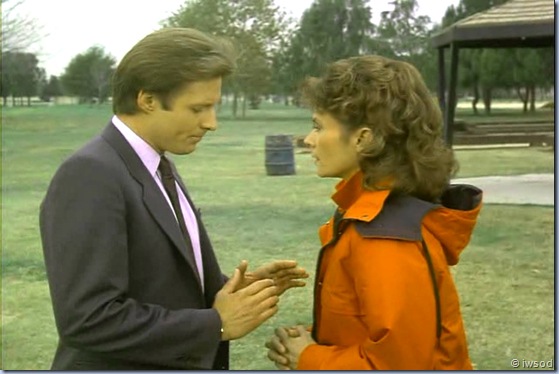 For a second it looks like he is going to reach for them.. I think he naturally wants to but forces himself not to! 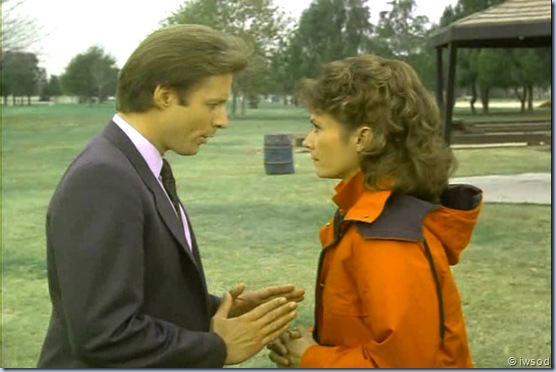 …that he’s telling us the truth- 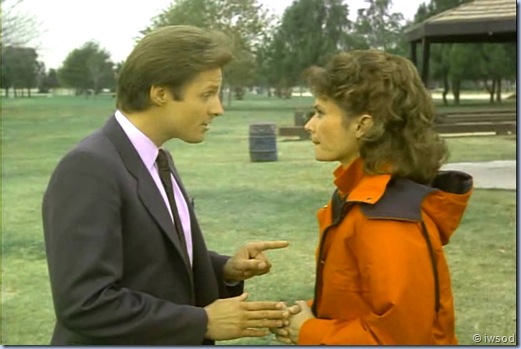 [here, the tip of Lee’s fingers touches Amanda’s hand.. he just can’t help it- he has to make contact with Amanda to reassure her.. or is that to reassure himself??

he leaves his fingertips there as they continue.. ] …  until I see otherwise.
Amanda: right.
Lee: Now, I wanna protect your cover so follow my lead.

Amanda: Okay, I will. [ Amanda, you lucky thing you!!]
Lee and Amanda head back over to rejoin Yuri.

Lee: Uh, Valov, Amanda here has some information that just might be important. Go on sweetheart tell him.

… um well, I think I remember transcribing some wiretaps of conversations between your Barkhov and Ulanovsky. 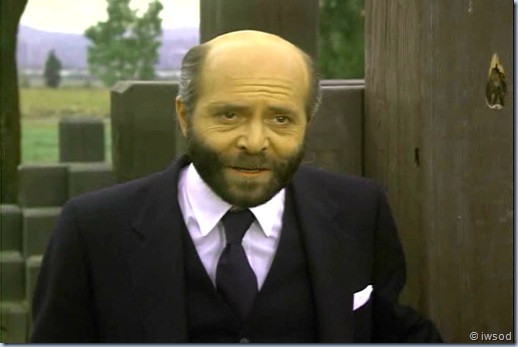 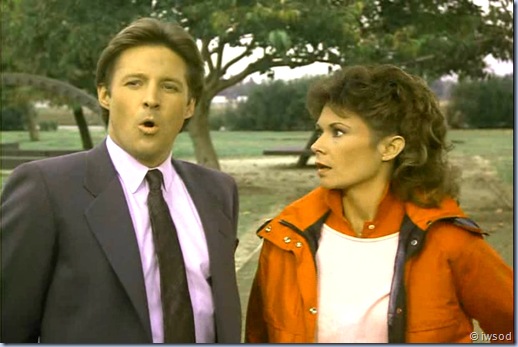 Sometimes she pitches in.. 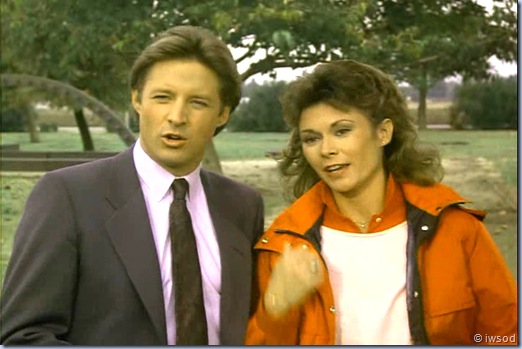 Amanda at the same time: yeah I pitch in… 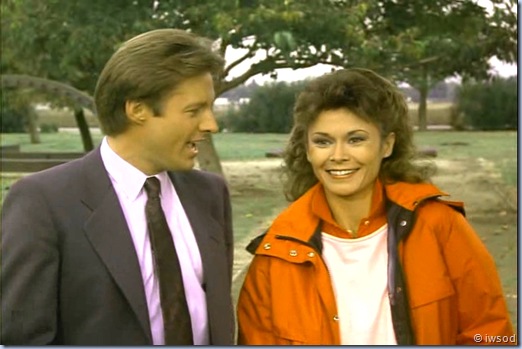 [Are these two too cute or what???!!! lots of arm waving going on haaaa! Though, way to go Lee make the agency sound like it is incompetent! ]
Lee: … when I’m in the field
Amanda at the same time: … when he’s busy in the field. 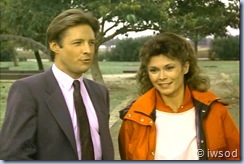 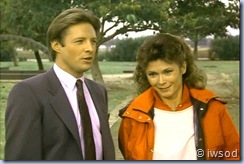 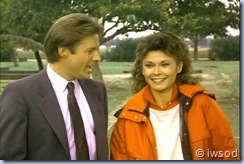 Yuri: these men have been under surveillance. You would have some invaluable information in your computer.
Lee: wouldn’t you just love a crack at it.

Yuri: we are not opponents on this Lee… You must trust me.

Amanda shrugs as if to say why not. Lee seems to look to Amanda for reassurance and support here! I love that!
Lee looks at Yuri again…Lee: okay. All right, back to the bowling alley then. 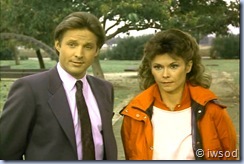 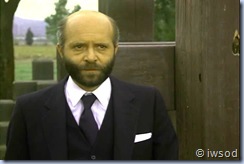 They head off back to their cars, Lee putting his arm around Amanda saying: come on, honey.

Soo.. we have Lee and Amanda as a couple – sweet! And so far we have a ‘sweetheart’ and a ‘honey’

I think they look like they are a couple even when they aren’t playing a cover!

Lee walks away putting his arm around Amanda? well.. it’s not really any different to what he normally does

The fact that Yuri found Lee through Amanda in this episode is pretty major don’t you think?  It means that Lee now knows the intelligence community has linked himself and Amanda – and if anyone wants to find him : good guy or bad guy – they can go to Amanda.. Nothing more is made of this in the episode (I think!).. but I think it should have been an issue.. it puts Amanda in danger- and it is some foreshadowing of what happens in Odds on a Dead Pigeon! I guess with the whole world about to go to world war III Lee kind of put this issue out of his mind

I think this is an interesting phase in their relationship: Professional and personal. Because Amanda is not yet an agent. She isn’t a trained agent, and she isn’t able to protect herself.. She doesn’t have a code name.. and she’s pretty easy to find!

While I love Lee and Amanda doing the whole couple cover – I’m not following the logic of it! How does it protect Amanda’s cover?? She’s not an agent.. she’s a civilian who helps out – though by now Lee has accepted Amanda as his partner – the agency probably doesn’t officially recognise her as such. So she is a civilian who helps out at the agency..[after all she admits to transcribing the wire taps] basically what Lee and Amanda say she is when fumbling ( very cutely) for a story – the only difference is Lee is her boyfriend: and so can be a little more protective of her than he would be if it were just someone who helps out at the agency, not his girlfriend, or not his partner.. you know? Ha! Come on Lee admit it, it is just soooo easy to have Amanda be your girl! hehehehe.. he’ll pretend any chance he gets

Reading a little of the script, I was surprised to see originally the character of Yuri was to be a young handsome man of 30 odd years – a man who would be a peer to Lee.. A bit like Volkenauer was

I think it would have changed the vibe had Yuri been younger..and it helps the cover to make a bit more sense

but.. we’ll see what’s ahead! I don’t remember the details!

It’s funny when you stop and think about last week (A Class Act) and then this week – both weeks have Russians in contact with Lee and Amanda.. last week- they were an assassination squad just looking to kill an agent, the ringer (ok for some weird reason they thought the ringer was a ‘top agent’ I won’t rehash that!) but.. they seemed to have no idea who Lee was when he was the ringer – they didn’t recognise him! (nor Amanda)

Then this week, Yuri seeks out Lee – via Amanda!! Sooo not only did Yuri know Lee, Yuri knows Amanda, and he knew that Lee knew Amanda well!! It seems that the departments in Russian intelligence really don’t talk to each other very much haaaaaa! [and why does Lee even have a codename when everyone, even Russian agents like Yuri, seem to know him now as ‘ Lee Stetson’ ???!!! weird!! I guess ‘Lee and Mrs King’ just doesn’t have the same ring huh!

Well, I shall finish up there for now.. This sequence has some really cute, sweet looks between Amanda and Lee here as they fumble together to explain their relationship

Love it!! I also like that they didn’t go for the obvious with Yuri saying: we thought Amanda was your girlfriend. They kept it more subtle – making room for that little diddy in the future ( in Odds on a dead pigeon I think.. ) Oh and I loved how Lee reached out to Amanda, stopped himself, but ended up juuuuust touching her anyway! swoony!!

Okay well, byeee for now! Merry Christmas Everyone!!
Would love to hear from you – when you have the time!! No pressure!! It will be a day or two before I continue on with this episode.. and I’m always open to hearing your thoughts or feedback