Back at Amanda’s [whoo!  the dad and his two boys are still jogging in the neighbourhood!] 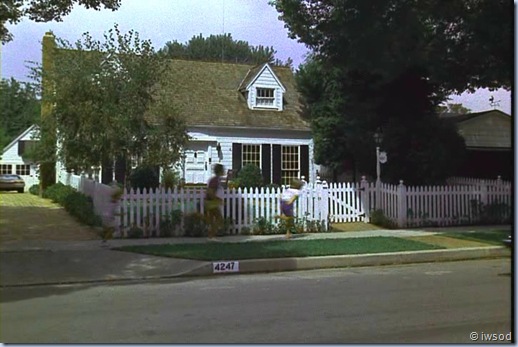 Lee has lost the houseboy hair..(though he is still in the lovely blue shirt!)  And Emily is dressed as her hard KGB woman again and they are reading the baddies’ message for Whatsit..

The $$ wanted for the airplane plans is 1.5 million bucks! The meeting place for the exchange is downtown at 5pm… Not much time says Emily:-time for drastic measures! She reaches for her KGB jacket..

Next thing, we see Tatiana/Emily enter the interrogation room again – Whatsit is cranky as anything!

He is demanding to be released.. and refusing to tell Emily the deposit code word that the baddies will need to be given to hand over Falcon Wing.. Seems Lee and Emily predicted this information would not be forthcoming! [Are we up to phase 4?

I think I missed phase 3! haa]
Emily: I am to veeleease you and you vill go about your business on your own? 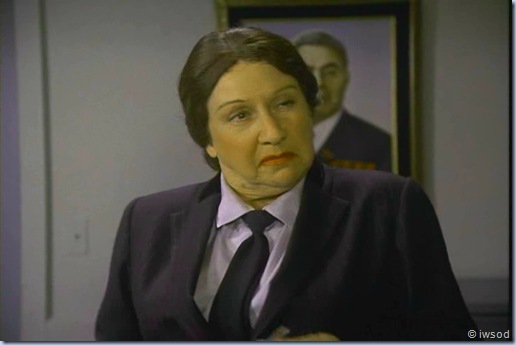 Emily: Maybe I should show you vat being on your own… 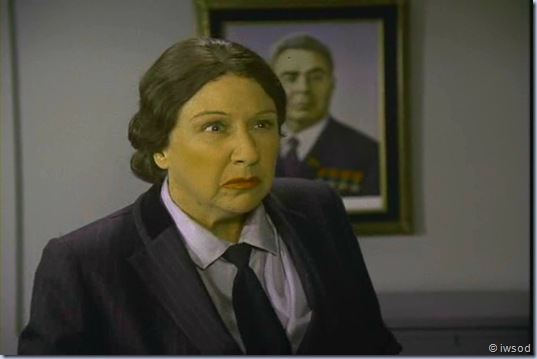 Ohhh My!!! JS is soo funny with all her facial expressions here! I am spoilt for choice! Want to laugh at this character even more? slow her down and watch her frame by frame. ROFLMAO!!!

Lee is brought in by the guards…(hilarious! Again: so over the top dramatic!! ) They reveal to Whatsit the documentary maker he met at the party was an agent. [After all everyone knows IFF is the agency 😉 ]
Emily (Tatiana): His name is Lee Shhhteyetshhon. He

is an American agent. He has been trailing you ever since you arrived. Veee intercepted him.

Love how she gives Whatsit a look up and down here: like she’s thinking-

you are such a pathetic idiot!!! Whatsit has that ‘Uh oh I’m in big trouble’ look on his face again: Excellent! Muahaha!
Tatiana walks over to Lee who glares at Whatsit. 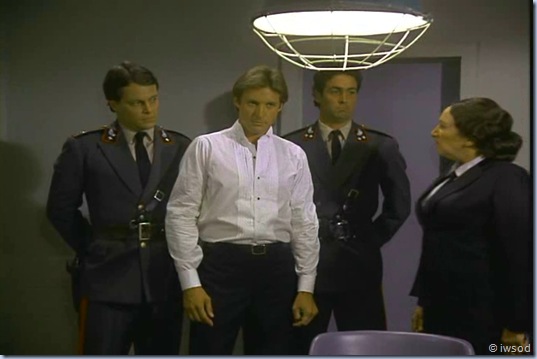 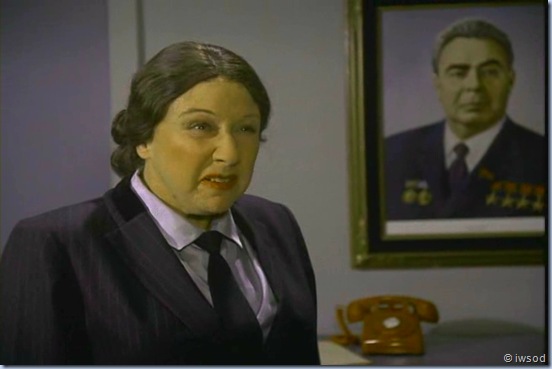 Emily gives one of the guards a nod.. he comes over to her side of the room.. and on her signal- he shoots Lee!

Speaking of over the top.. Lee’s performance here at getting shot? outstanding!

Very dramatic fall into the corner there Lee! You made it sooo convincing!

Which isn’t easy considering there is no blood and no bullet hole.. ahem.. Ahh but wait! here comes the blood!

now.. if only the bullet hole would appear!

Love how they pick up Lee by the feet and drag him out of there! 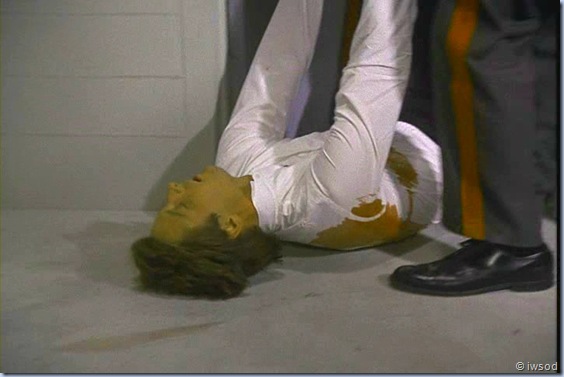 ( btw- does he have a special bag with outfits in it too? where did he get the tuxedo shirt from?

) oh and check out the blood stains on the floor! good thing they covered Amanda’s floor too!! (her floor in the dining room is wood, with a white rug)

Loooove the look Emily gives shocked Whatsit as she turns to look at him now!

Emily: Now, you vill tell me the remaining details of your plan including the coooode verd.

Wait a minute! Lee just got shot by Clarke from the Bold and the Beautiful! ha haaaa!! took me a minute to work out where I had seen that cleft chin! hehehe

Time for a little reminder of how lovely Emily actually is- far removed from her Tatiana character! We find Emily relaxing in the kitchen, while Amanda tries to clean the fake blood from Lee’s shirt. [ hey where’s Lee? why isn’t he walking around shirtless?? !!! drat.. wasted opportunity!] 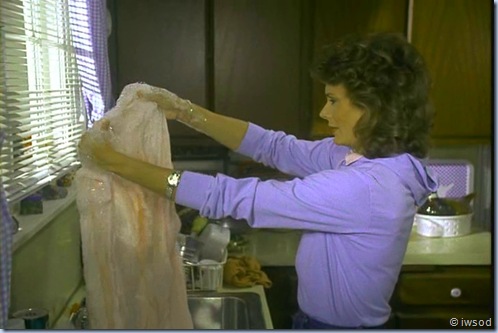 Amanda: Ugh!! The things you people do in your business.

Hey! Wait a minute! You are in this business too! She should say ‘ Our Business’ IMHO! This doesn’t make sense after Amanda consciously decides in Brunettes Are In, that she wants to be in the business! [This is definitely before Brunettes!] 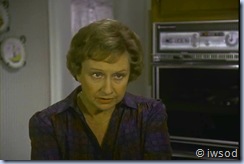 Emily shifts a gear here.. Emily: Amanda, I’m afraid I have to ask a great favour of you.

Amanda: Anything, Emily.
Emily: It concerns Falcon wing. I need you to meet

with those two men from the paint store again. 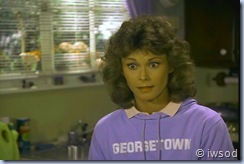 struggles.. she shakes her head and then nods.. sweet! She’s afraid..but she’ll do it! ]
Emily: You’re a very courageous young woman. You know it’s for our two great countries.
Amanda: And for you. 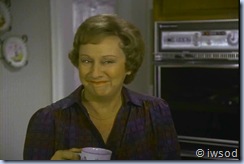 Call me crazy, but I was thinking it was obvious Amanda had to meet the baddies at 5 o’clock.. she’s the go between! Surely they weren’t thinking anyone else could do it?? Eek!
Still, it’s a very sweet moment here between these two.. confirming the bond they have with one another. I appreciate that Emily knows she is asking alot of Amanda – sometimes I get the impresssion Lee doesn’t realise how much he asks of her- but well.. maybe that is a defense mechanism of his.. so it is encouraging to see Emily be honest with Amanda – and acknowledge Amanda’s bravery ( after all you can’t acknowledge someone has been brave without also acknowledging that a great deal had been demanded, and it was to be feared). This is one of the things I love Lee saying in his proposal to Amanda in Nightcrawler.. I love that he acknowledges her bravery!!!! Anyway.. I’ll try not to get ahead of myself: this is still early days!

It’s also lovely how Amanda makes it clear: she’s doing it for their countries- but she’s also doing it for Emily. I am sure a lot of what Amanda does: is for Lee!!! [It’s in the subtext of this conversation I think- her working with Lee corresponds with her work with Emily.. ] What do you all think? have any thoughts on this little moment between Emily and Amanda?

On to Hot Shot pool hall for the five o’clock meeting.. LOL I see an army recruitment poster at the entrance – how Ironic!! considering their are two soldiers waiting to do treason inside!
A pic of Amanda entering where you can see the poster: 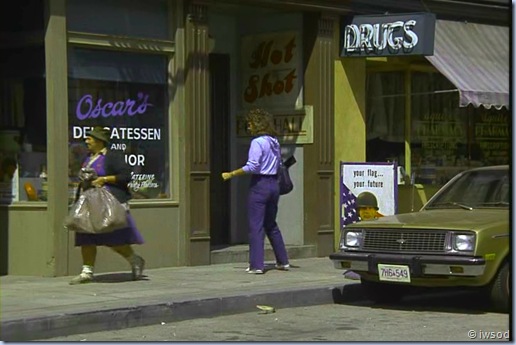 Okay! Soooo why is Lee suddenly in a completely different suit? This is the same day! He should be back in his lovely blue shirt! ..bizarre! I have a theory.. We see this same shirt for like a minute: in the tag of ‘ Car Wars’ – I think they were filming this at the same time.. but, well.. just a theory!

Anyway,  Lee, Amanda and Emily are on the street, opposite the pool hall where Amanda is meeting the two men..
Aha! another funny moment.. Lee and Emily are in the alley way prepping Amanda for her meeting with the two men. ( they say don’t worry we will be right out here- that is comforting??? what good are they out there?)

Amanda is all set to go in by herself.. and off she goes – no wait a second! she just has to pick up the litter first 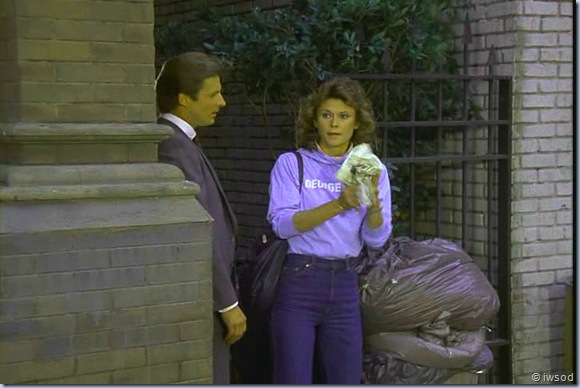 and then she is on her way! the expression on Lee’s face is so funny.. 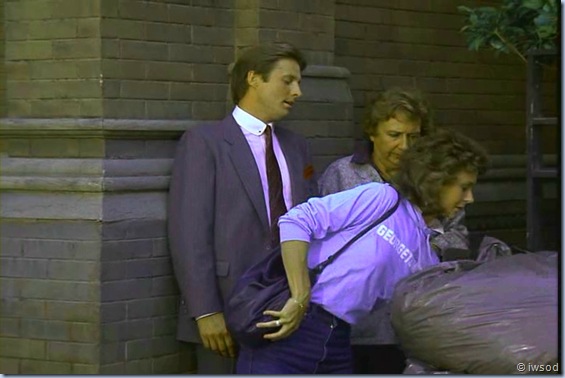 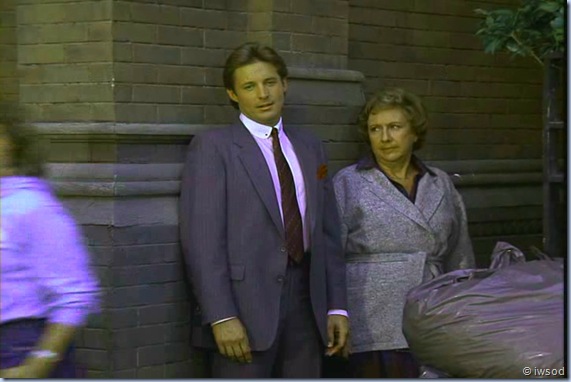 and then he can’t help but share a little smile at her with Emily.. 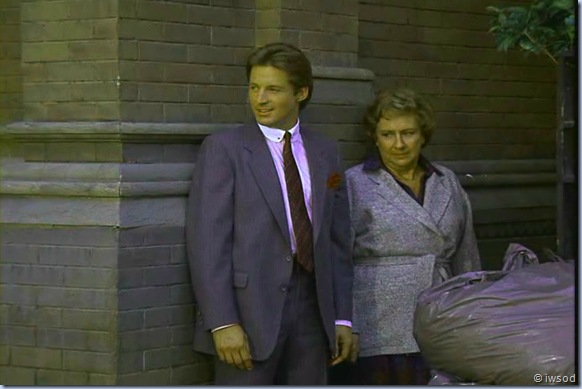 You think she is thinking these two are so cute together? [I like to think so!

] I wonder if that was in the script or an improvisation.. [It’s not in the script! And I’m looking at the final draft on Petra’s site]

Amanda heads into the Pool Hall. I have to laugh.. from this view it looks like the Pool Hall sells drugs – rofl! I mean.. I knew it was suppose to be seedy but isn’t that kind of overt for America? Rofl! I am just kidding! I realise the drugs sign is referring to next door: but it looks like it is advertising what the pool hall sells

Well, I shall finish up there for now! Love ( as always) to hear from anyone out there in the big void who is reading!!!!