At the electronics store, Lee gives us a little reminder: the leak is jeopardising people’s lives, it’s serious.. and here is Lee and Francine stuck tailing Amanda! Seems Amanda has led them all around town! She’s been busy!

A nice allusion here to Amanda’s dire financial situation which is an issue in an upcoming episode- she shops at different stores for different things because she has to hunt for bargains! As Francine puts it: It’s what I’ve suspected of her all along, the woman is a coupon clipper! She’s bargain shopping at a furious rate.

She says that like it is a bad thing. I say good on Amanda! It’s delicious to think later this season Amanda gets a pay rise: by taking money from Francine’s cover wardrobe budget!!!

Oh my.. this could umm almost be evidence that she isn’t a double agent no?? errr if anyone was actually looking for that.. 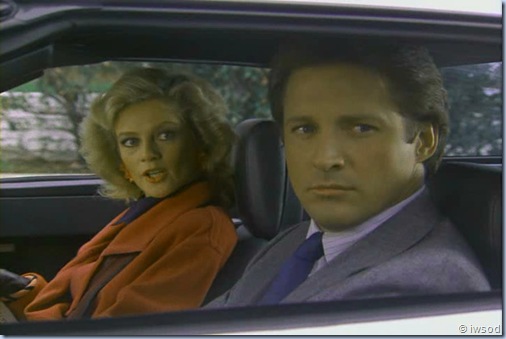 Amanda leaves the store with a bag full of contents unknown!!!!!whooooo

Lee follows Amanda and Francine stays behind to find out what Amanda bought.

The baddies are happy to see Amanda is being tailed by the agency- the plan is working brilliantly (and they are sooooo stupid!

) they wait for Francine to leave, before they go in themselves to find out what Amanda bought. Nick: When the agent leaves, we should talk to the store owner also. This just might be something we can use!

(mauhahahaha!)
Back to the plant nursery the next day for a baddie meeting.

The second defection is going to happen that night..
The baddies know the location..(a theatre) and all the defensive positions they will use.. basically Milos Durak is toast!
The baddies make plans to: we’ll go over our plans to welcome Milos Durak to the United States!! – Muuuahahahaahahaa!

Back to IFF and for once Lee is sitting at Billy’s desk. He has the plan for tonight’s defection, the routes and everything open and he’s taking notes.

In walks Amanda without Lee noticing?! ( the door is in front of him) Actually I don’t know why Lee didn’t tell Amanda not to come into work.. especially with the defection happening that night. Maybe he’s in denial at just how serious this is for Amanda.

Anyway, Amanda comes in to query one of his

receipts.. it’s all very innocent.. but looks bad.. and.. looks even worse when

picks up the plans for the defection and almost walks out with them! how could she have made that mistake? the plan is huge..even if it was folded in half.. LOL Billy actually jumps when he sees this! And he turns to Francine to share a ‘look’!

wait a minute.. maybe she is a spy??!!! tee hee.. nooo she’s just amazing at accidentally getting herself in trouble!

Billy, Francine and Lee discuss the defection plans. Thanks for pointing out their positions on some meaningless map! 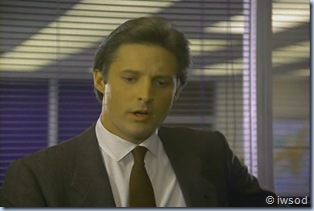 Okay.. another Random agent’s name dropped!!!! – I wonder if this is a reference to Andrea E. Weaver the costumer (who was responsible for the fabulous white evening dress in ship of spies!). So, the plans are set for the next defection..

Oh and good old Margaret pops in to check on the progress of Amanda’s surveillance as Mr Larner is on the warpath.. yes Margaret- pass yourself off as trying to help-ugh.. If I didn’t know better, I’d say she looks a little happy at their discomfort over her asking for the report!

In storms Larner asking for the King File!!!! at the top of his lungs!!!! Lee immediately signals for him to lower his voice-

Lee knows Amanda is right outside and straight away

thinks of her.. oh bless him! [LOL not to mention the fact that Spiderweb is suppose to be top secret no?? rofl!! ]

Lee heads over to the door.. still signalling to keep quiet.. and nervously smiling..

The wave and huge smile Lee gives to Amanda as he closes Billy’s door is funny! 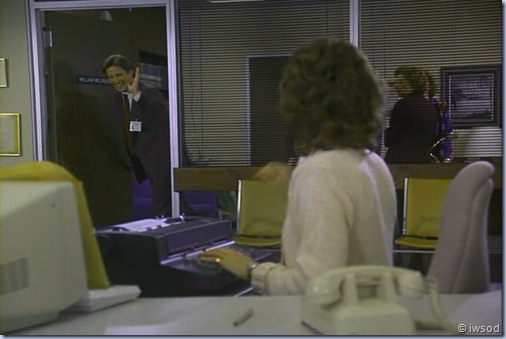 You’ve got to feel for Lee here!!! Lee closes the door 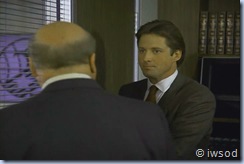 The door closed, Lee gives Larner a big scowl! Lee responds: What she usually does here, she works. 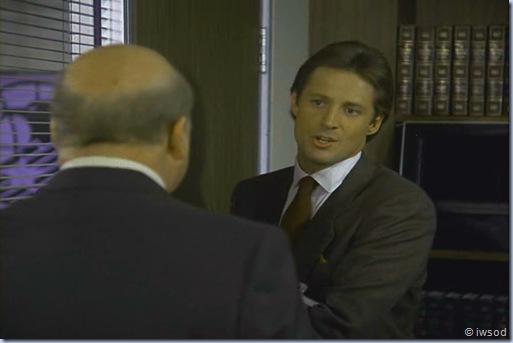 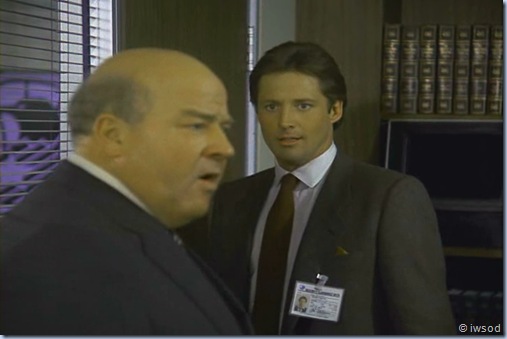 I love the look Lee gives Larner as he walks away- you can just imagine Lee silently calling him a Jerk!

Larner: alright! I’m going to say this one more time. I hope it finally sinks in! Amanda King is under surveillance because she is under suspicion! [ Nooo it’s because you ‘know’ she is the double agent!pha!] Now if you professionals could stop behaving like her pals for just a few minutes, you might be able to do your jobs!

Whoa.. IMHO they should have kept her away from anything to do with Spiderweb- and protected her.. [guess that would be boring!

] Had she not been there, the defection that goes bust this night could not have been blamed on her.

I feel for Lee-  he is finding this really difficult to deal with and he is struggling not to blow his stack at Larner!
Larner demands Margaret bring to him what Amanda is working on – immediately!

Lee: excuse me Mr Larner but I think you’re way out 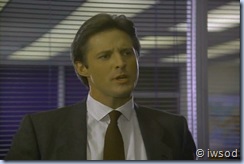 of line on this ( nah just call him stupid Lee!

)lol.. Francine jumps at hearing Lee here – uh oh.. what’s Lee going to say?? he’s going to get himself into trouble!!!! And.. Francine knows something Lee doesn’t..
Lee continues: you want to know what our surveillance report on Amanda? Okay, here it is, she went to three separate supermarkets. One drug store. One  drycleaners and her last suspicious act was to stop at a hobby shop!

Poor Lee he has underestimated the baddies.. but then.. I guess he doesn’t realise they are at work in Amanda’s suspicion- he flippin should though – he knows there is a leak at the agency at work in destroying spiderweb..poor Lee! Lee is soooo confident of Amanda’s innocence he doesn’t even check with Francine about what Amanda bought at the electronics shop- Ohhh Bless him!!

Larner: what did she buy there?

Lee: What?
Lee looks at Francine and clears his throat – come on Francine tell him.. Only Francine is not enthusiastic…

Larner: Oh! things that could be made into a nice little transmitter and receiver.
-Cue an Ohhhhh Crap!!!! look from Lee!!!! 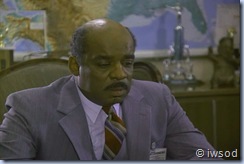 Billy shakes his head, this doesn’t look good for Amanda!

Amanda doesn’t want to hand in the work unfinished but Margaret cryptically responds: It’s alright, I’m sure he’s not judging you based on this!

whooo cool double meaning there smk writers! I love it!!! (and yep, it’s in the script) -yeah instead Larner is judging Amanda based on the misinformation Margaret is setting up.. ugh!!

and pacing around the office!

We cut back to Lee in Billy’s office – he’s going off at Larner.. oh boy- Lee is getting really mad here!
Bless him, not even Amanda’s shopping habits have swayed him..
Lee: all you’ve got is little shreds of circumstantial evidence and you want to throw Amanda into irons.

[man.. the agency is a cruel workplace.. I think it makes Lee and Amanda’s relationship vital to their survival there!!!]
Larner: well let me toss out one more little shred of circumstantial evidence. [Lee seems to look at Billy here as Larner gets his note out of his pocket- as if to say: come on Billy! put a stop to this ridiculousness.. but.. Billy doesn’t 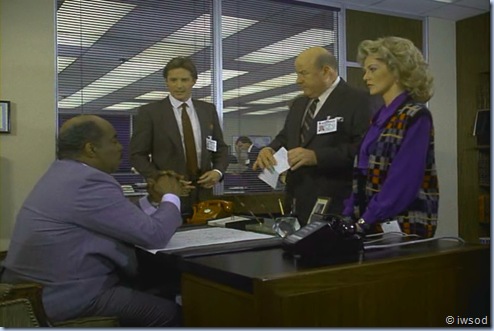 Larner continues: A Romanian defector ends up in the morgue and 24 hours later this happens.

Larner hands Lee the note.. and oh goody.. Margaret has rejoined them.. grrr..

Francine: what is it Lee?
Whoa.. the look on Lee’s face! he responds: it’s a bank deposit confirmation slip to Amanda’s savings account. 50 000 Dollars!!?? Dated today. 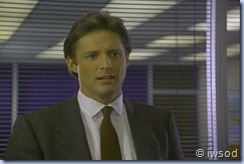 Francine rolls her eyes.. like- well that’s it then.. Lee is just silent.. stunned..

Larner is relentless: Alright, now I want Amanda King out of this agency now!! We are going to bring Mr Durak safely in here, and then we’re gonna deal with her. Margaret, you come with me.

[LOL.. why not leak false info to Amanda… couldn’t hurt..  it would prove she is innocent or confuse the bad guys. win win!.. but.. what do I know?!]
Larner walks out.. with Margaret lagging behind to add as she leaves: I know he’s being difficult, but it’s just his stomach is giving him so much trouble!
[Ohhh button it Margaret! ]

I’ll stop there.. and pick up immediately where I left off next time.. Thanks for reading! and.. you know what I am going to say next!!! come on guess!!!!!!!! Yep- I’d love to hear your thoughts!! Feel free to discuss the episode  amongst yourselves if I am not around