It’s time for the Scarecrow to interrogate Amanda!  😆

Lee (very business like-tee hee!) : Amanda sit down please. Alright! Now.. Where were you between November of ’82 and mid-January of ’83?

Amanda: Are you Perry Mason?…

… Am I supposed to crack under the pressure or something?  😆

…Where were you?!
Lee is too cute.. he has to do something very uncomfortable here and question Amanda – when he doesn’t even think she was guilty! So IMHO, as a coping mechanism, he moves into business mode.. only.. Amanda doesn’t let him! Tee heee.. What a tough guy- he has to plead with Amanda to co-operate! teee heee! It’s too cute! –I hope I’ve explained myself clearer here than I did in the last post

One other interesting thing he does at this moment, which he continues doing for the rest of this scene is: he bends down to Amanda’s level. So while he started off with the intention of being in the powerful position asking the questions, he ends up most of the time bending down to her level anyway

Lee’s unconscious is undermining his professionalism when it comes to Amanda.. and I love it!

He can’t dominate her – he admires and respects her too much (she’s his North Star!).. at least this is my interpretation – feel free to share your own.
Amanda: I was here. 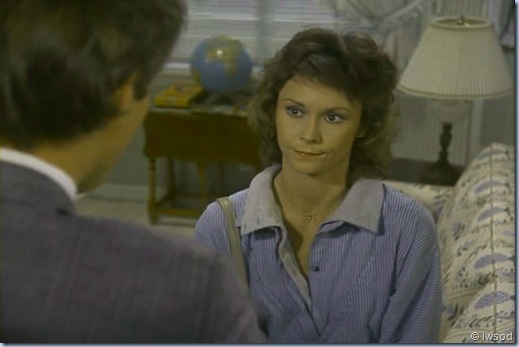 ] … alright, what about the ten thousand dollar deposit in your bank account…

…February of ’83. Remember where you got that money?

Amanda: yes I remember where I got that money.

[I love how Amanda doesn’t volunteer it.. it’s like: ha! If you are going to go all Scarecrow on me.. you can flippin ask me for the information I’m not going to just give it to you and make it too easy!

Amanda: Leeeee!!! There was an electrical fire in the kitchen. You know that! the insurance company paid 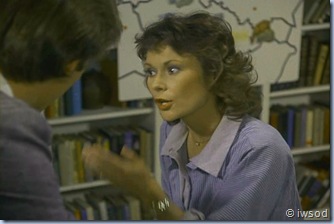 me $10.000!
We see Lee bow his head and take a deep breath here.. he’s struggling to concentrate – is it just me or does Lee very quietly say: ‘Yeah’ here as he bows his head??? – LOL not a rhetorical question- I’d really like to know! LOL!

Anyone??[maybe I should always put an ‘anyone?’ at the end of a non-rhetorical question.. I imagine it could be confusing! I’d sound like that teacher in Ferris Bueller’s day off- Anyone? Anyone? ]
Amanda is relentless (I love it) and she continues: Now Look! You said I was in trouble…

[Amanda tries to take back control!

she could do with a few answers!]
Lee: Just one more thing!!!!

Lee: What were you and that polo player… 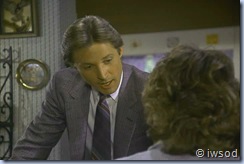 … doing at the Chez Tayir the other night?… 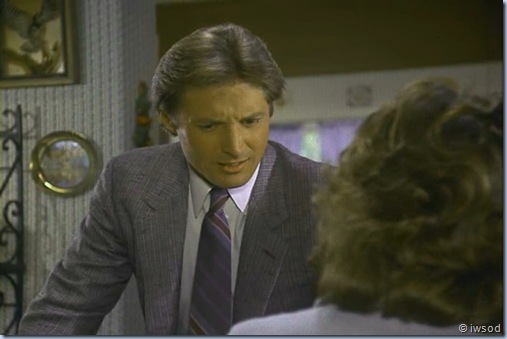 … And, where the hell did you meet him? 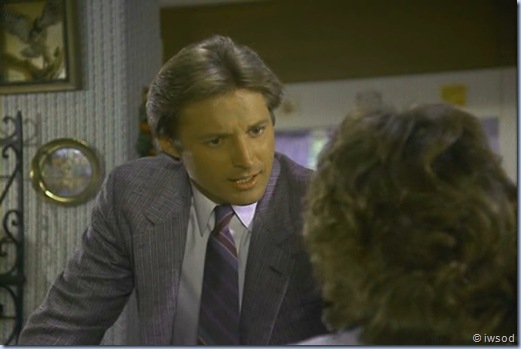 Lee has to ask about Chez Tayir, but he just can’t resist throwing in a little dig at Bryce – ‘polo player’ eh Lee? did you check him out?! and what difference does it make how Amanda met him? Ohhh boy.. there’s no disguising it here – Lee is as Green as a flippin Shamrock!

Lee really wanted to know how she met him much more than how she ended up at the restaurant!!
Amanda: You’re talking about Bryce Topping?!

I love that Amanda ‘clarifies’ this.. tee hee.. it was obvious.. but she makes a little point of it – the man has a name.. she’s noticed his attitude!! 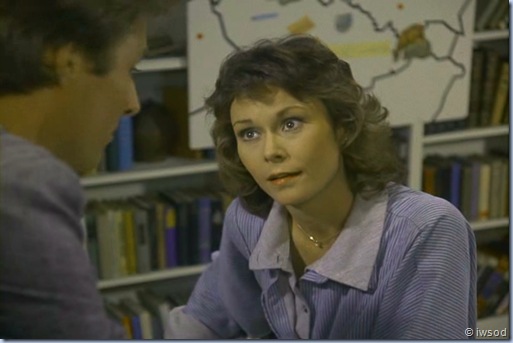 Then, a realisation dawns.. Lee’s sounding like a jealous person!!!

Love it!!!! Amanda gives Lee a cheeky smirk [whooo haaa and licks her lips!!] as she sees he is jealous and she’s caught him out!!! Whooo Hooooo!!! What was it you suggested Amanda thought at the end of Ship of Spies Cindy?
Amanda: I’ve still got it!!’  ROFLMAO! I love that!!!
[anyone not thinking Amanda sees Lee’s jealousy here?]

Amanda takes a moment to get a grip and stop smiling

or she might give something away too.. she kinda likes it!!!!

Amanda: Lee! Bryce has a little boy in Jamie’s class. I met him at the PTA. He asked me to go to the movies. I said yes. 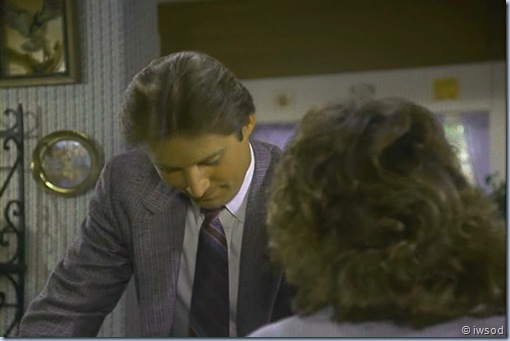 so busted Lee!!! and he knows it

Amanda continues: …When we came out of the movie a guy handed me a flyer that was advertising Chez Tayir…

… Bryce had been there before, he suggested why don’t we go have a cup of coffee.
Lee: Flyers?
Amanda: yes flyers! You know Flyers!!!
Lee: Flyers!!! That’s it. That’s it!…

… They hand them out, hoping that you’ll bite, if you do you show up at the murder scene and that is more ammunition against you. Man! they are smart!!!

I agree with Lee- I’m impressed with these baddies!

Amanda: who are they? 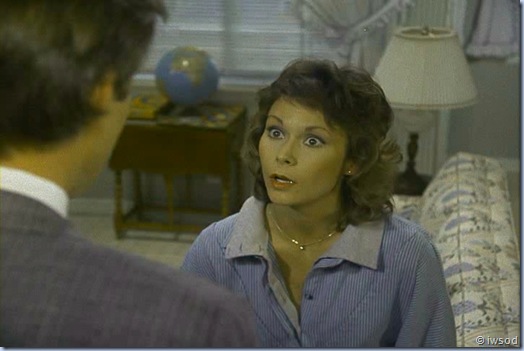 poor Amanda.. she still doesn’t know what’s going on!
Lee: The people that are trying to set you up! There’s been a major security breach at the agency.

Amanda suddenly goes quiet: ohhh Lee. Oh you don’t think that it was me? 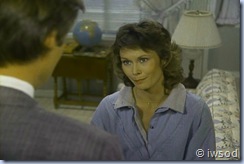 I love that it really matters to Amanda what Lee

thought of her- Awh!! I also think Lee didn’t think about reassuring Amanda he believed her- because it was so obvious that he did.. He never questioned it, so it didn’t occur to him that she might think he did!

Lee: no I never thought that. –Emphatic!!
When Amanda then says : then ahh why did you 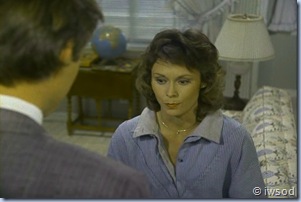 break into my house and why were you searching it? She seems to really believe that Lee suspected her.. Amanda doesn’t know yet what she means to him! and just how much he trusts her.. 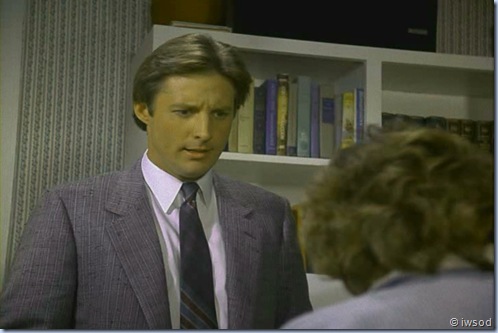 Lee: I never believed it for a moment Amanda. I was ordered to search your house. 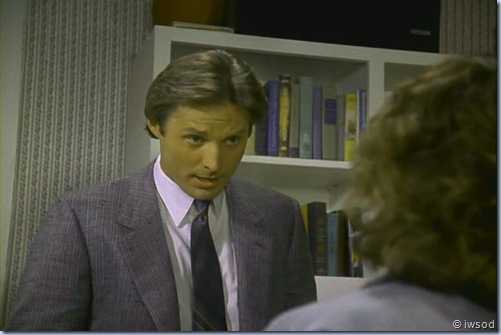 whooo hoooo!!! I love that it is very important to Lee

that Amanda know with certainty that he never, ever, not even for a moment, believed that she was the leak.. awhhhh- doesn’t that again show what she now means to him???

Amanda responds with a quiet smile and say: Owwhh! Like- poor Lee had to follow orders and search my house! (IMHO!)

I think the baddies were very dumb in one thing: in choosing Amanda to frame! Had they known how close ‘she and Lee’ ( haaaaa.. get it? the bathrobes??) have become, they never would have chosen to frame her! [I guess they didn’t ask Yuri huh..shame.. or he would have told them she was his girlfriend who just ‘helps out’

at the agency!!! tee heee]
Amanda: By Mr Melrose? 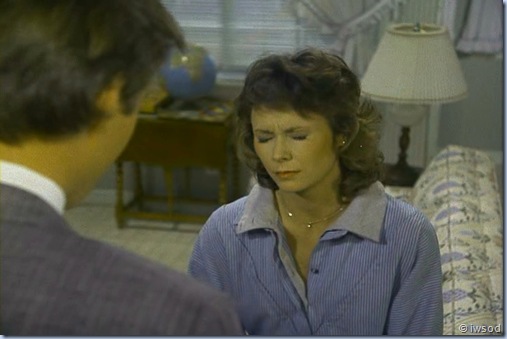 Lee: But, he was ordered too.
Amanda: Ohhhhh!!!

Lee: Look, let’s not get bogged down in hurt feelings. Huh!

Amanda: It’s alright. My feelings are not hurt.
[LOL there she goes again! and when she screams that means she wasn’t scared!

]
Lee: The breach is real. The set-up is real. Now what we have to do is find the people who wants you to take the fall.

Amanda: Lee. Why would anybody want to set me up?
Lee: I don’t know, but whoever they are. That’s our double agent. 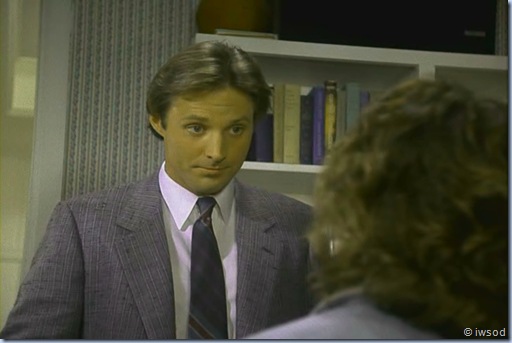 You know, for all that Amanda teaches Lee about trust and friendship- Lee teaches Amanda too.. He is right to encourage her not to get bogged down in hurt feelings..[though he does acknowledge them- well done!] and to focus on the problem at hand.. Billy ordered the search because there was a real set up.

While I would never want Amanda to loose her heart, her humanity – she is still somewhat naive to be asking why anybody would want to set her up – it’s not personal.. it’s not about her.. she was just a means to an end.. we see another moment relating to this towards the end so I’ll come back to that idea..

This might sound strange, but I am sure Amanda is lucky to learn this lesson this way- with Lee there as her rock!!

Most trainee agents would learn these lessons all on their own with no one to trust.. Just think.. Billy, Francine and probably Lee- all learned this painful lesson alone.. it does make sense of how they came to be the way they were- that is till Amanda started to influence them

I keep thinking of brave, wonderful Amanda in Nightcrawler – she wasn’t wondering why Birol was doing this to her.. her character grows a lot in her maturity as an agent in this episode.. and how the agency works (ie. they are not one big family, watch your back!!) Working for the agency, you’ve got to be smart, and careful – you can’t be going to the czech embassy anymore!! Aie!!

I guess Lee and Amanda make such a good team because Amanda softens Lee and reminds him there are a few people he can trust in this world, and Lee toughens Amanda up and supports her as she learns she can’t trust everyone in this world.. but she can certainly trust Lee

I didn’t realise this episode was so full of goodness.. character goodness- you know? lots of meaning… I am struck by how far these characters have come!!

Now I’m really glad I didn’t rush through this scene!

Sooo what do you all think?? Anyone?? Anyone?? 😆
Well, I shall finish there.. byeee for now! Thanks so much for sharing this walk with me!!