Lee has contacted Amanda and.. is giving her a ride..
Amanda simplify things for Lee by delivering his files? no way!!!
I think the gag here is- Anytime Amanda gets involved it is never easy or simple for Lee – It’s not a joke I find particularly amusing.. I confess, I am a little over that gag! but maybe it’s just me..  if this is earlier though, then I guess it makes sense.. and it probably wouldn’t bother me.. after watching Spiderweb? it bothers me!
Lee: Okay, so what happened to your car?
Amanda: The weirdest thing. I drove the boys to school this morning–you know, because of those showers that we had… 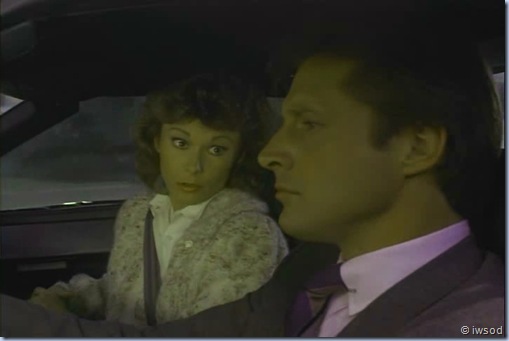 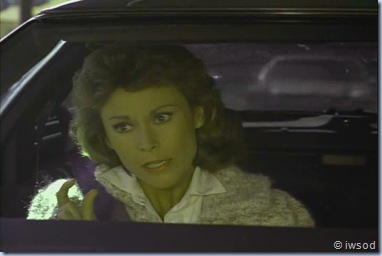 Amanda: And Jamie has this little space creature toy, and he was playing with it, and he dropped it down the window on the passenger side.
Lee : Yeah, so? 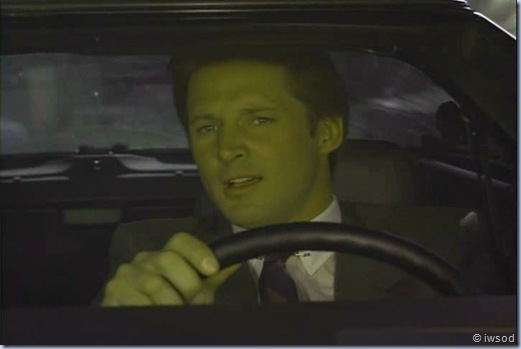 Amanda: So, um, after I dropped them off at school, it started to rattle so I put the window down to try to get it out, and the window jammed- 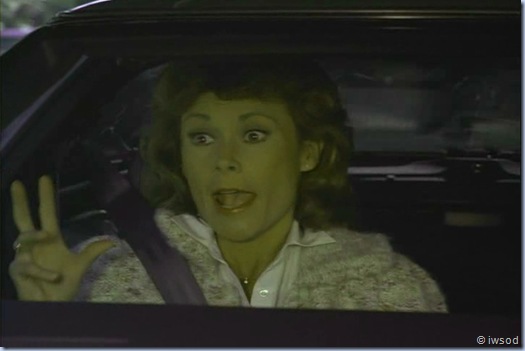 Amanda actually takes a breath- so Lee is able to interrupt her story.. Aie! 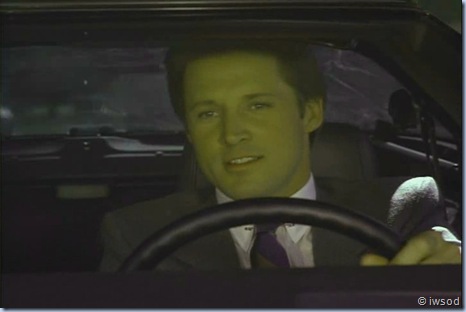 Lee: Ah ha, and the rest is Amanda King history. 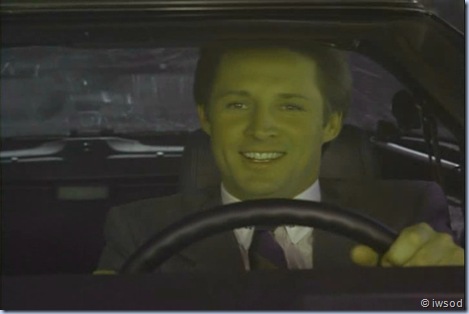 Lee smiles here and seems to be good naturedly teasing her – but.. letting her know she needs to get on with it! Wise Lee!

Amanda gives him a glare anyway though! Yes Amanda.. you do prattle on.. 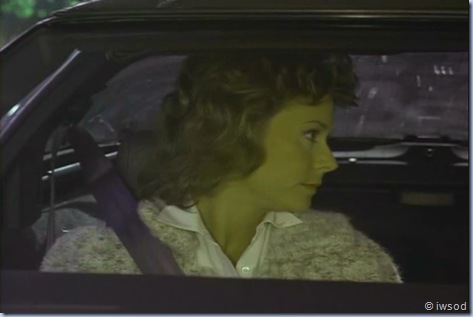 You guys notice the music playing throughout this scene? I guess it is the Amanda theme.. but I am finding it to be annoying now! Like haa haaa listen to Amanda go- what a dill she is.. I am very happy to see this part of her character evolve- I think this is the last of the ditsy-Amanda type episodes, and while I enjoyed it first season, I’m feeling it is time to move on.. she’s smart- and this prattling on is not! Just my opinion though.. if you still find it endearing- just ignore me and enjoy it

Lee: Well, did you take it in? I mean, it should be easy to fix.  [Oh dear she didn’t take too kindly to the teasing.. yes best ask after the repair and smooth things over

ha!! ]
Amanda: I took it to Mister Mike’s, but he was awfully busy.
Lee: Mister Mike’s? [I thought this might be a gag about Mike and the Mechanics but it’s just too early time wise.. this is early 1985 and they released their first album end of 1985! Must have been smk fans! 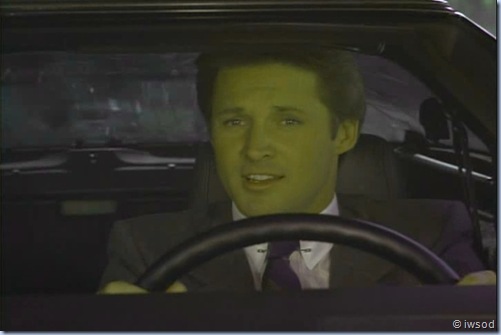 Amanda: Yes, he’s my mechanic. He did say that he thought he could get to it by the end of the day, though. 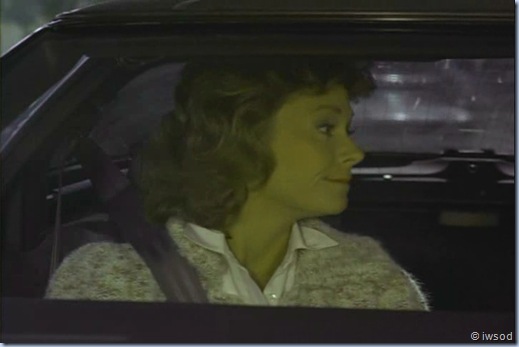 I just bet he put Amanda’s car last- because she would just accept what Mr Mike told her, rather than pushing for better service.. as it turns out, he doesn’t get to it- why am I not surprised! [I’ll come back to this idea]
Lee: Good, good. Look, Amanda, you’re the only, uh, civilian worker that I could get a hold of, and since the job does call for a car, how about I round you up one? Hmm?
[Hmm.. this  is not sounding like she is his partner.. or is it just me??]
Amanda: Oh, Lee! Thank you so much. That’s really very nice of you. 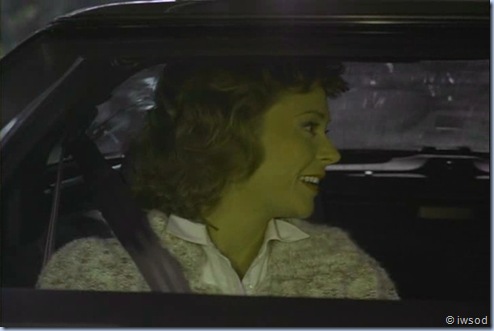 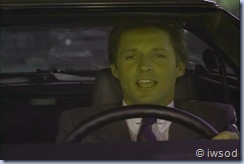 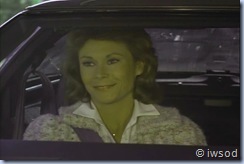 As annoyed as I am by the highlighting of Amanda’s ditsy qualities in this scene – it is really wonderful to see Lee and Amanda being friendly!

Amanda is happy that Lee has given her some work to do and Lee helped to make the job possible by offering to find her a car.

Lee is happy to see Amanda, and happy to help her out and throw some work her way – I love that the episode starts with grumpy Lee at the agency putting up with LaRue.. and now he is with Amanda- he seems much more light hearted

plus, he enjoys a little cheeky teasing of these situations Amanda tends to get into! Lee’s line that the rest is Amanda King history – is spot on!!

Genius line of dialogue love it!!

Ahh the irony, bringing in Amanda was suppose to free up Lee to get his work done..  do you think he knows that if he just hangs around Amanda long enough that the current case he is working on will come into contact with her and she will help him solve it?

I’ve always presumed this episode came right after Brunettes and the big change in their relationship. Because coming up we see Lee trying to control his temper – but.. could this also be interpreted as being before Brunettes? Lee’s trying to control his temper with Amanda – and this is a foreshadowing of him completely losing his temper in Brunettes? I think it can work either way. It’s not like Lee didn’t make any effort before Brunettes, or do things to help Amanda out- he did. So far this episode doesn’t have the vibe that they are ‘partners’ to me- what do you think?

It will be interesting as we go through, to see where Amanda’s character is at in this episode – and if she fits this episode better being before her big growth in autonomy and assertiveness in Brunettes or after.. So far? I’m leaning towards this being right before Brunettes – but that may change.. I’ll keep an open mind while I watch on! Love to hear your ideas!!

Thanks for reading everyone! I must finish up there before we (uh oh) meet Gino!

I’ll get the next post up as soon as I can..but given I am pretty busy at the moment – it may be a little delayed-but rest assured: I’m still here!!
– drat Real life! Hope you are well!! and  feel free to chat away together