Ok, it’s time to get back on the SMK Magic Bus!  Wooo hooo!  We see our first gun shot wound, lots of action and a blooper I never noticed before.  Amanda and Lee also get busy saving each other and the dam.  And let’s not forget about those dimples!

Amanda gets taken at gunpoint again….only to be tied up with Lee again! I have a feeling this is going to happen a lot! I think the baddies all shop at the same rope store because they all use the same rope! Even the European ones! We’ll get to that later….

None of these either – too bad, it would have saved him the bullet wound to the leg!

Still waiting…..more learning patience….can anyone else hear the Jeopardy theme song in their head?

There is a lot of saving going on in this episode. Lee saves Amanda, Amanda saves Lee, they save each other, the dam and everyone who lives in the valley!

Oh no, the baddies have them tied up. Tied up for two episodes in a row! At least in iwsod’s revised order…actually in airing order too – just in reverse!

After Lee breaks the headlight on the jeep, Amanda uses a piece to cut the rope. Guess rope cutting is more of a housewife skill…

After getting out of the ropes, Lee hides on top of the Vigilant just waiting for his chance…. 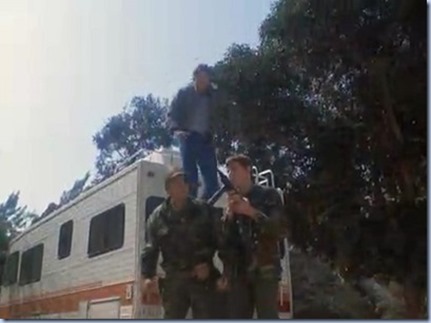 Look! It’s wizard Lee! He’s hovering over the baddies just waiting for the right moment to drop in! This reminds me of the Disney Witch Mountain movies – I know there is hovering in there. (Don’t ask. Yes, I’m old. Well, ok, not that old.

And no, I’ve never seen any Harry Potter movies. There’s probably some hovering in those?

Ahhh, Scarecrow with a gun. Love it! He’s got the bad guys now! Right where he wants ‘em…. 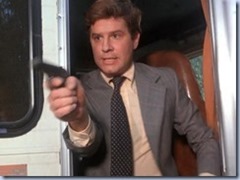 Oops! First Standish ate the key (those Survivors will eat anything!), then the double-crossing Senator’s aide Holt tried to get Lee with his gun and now they’re getting away! Drat!

Now it’s Amanda’s turn again to do some saving!

While Lee is fighting off the bad guys, Amanda calls for help on the radio! Or CB? What is that thing? I hope it’s plugged in this time…. AK: Hello? Hello? If anyone can hear me please call 555-3434 and say Scarecrow, Donohue Dam.

Wow! KJ is strong! She is not happy that Lee is shot! But she manages to help him get inside the bus.

Now Amanda gets a chance to show off her driving skills. You know, the ones she learned when taking Phillip and Jamie into New York City on Thanksgiving to see the Macy’s Day Parade?

It’s the Army!! Why are they shooting at us?? What is going on here?

Ahh, back to Lee. He’s using the Vigilant’s over-sized squirt gun to get rid of the army guys!

Doesn’t he look like he’s having fun?? The only difference between men and boys is the size of their toys….

Drat, I wish I could make this picture clearer!

Hey! I just noticed a blooper!!

Check out the hand in the bottom left corner of the picture! See the fingers holding the red thing?? Oopsie! Either that or we missed the guy riding on top of the Vigilant!

Ok, back to business….only 9 seconds till the missile is fired! 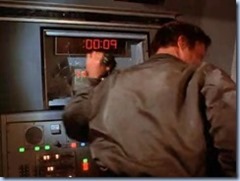 Lee manages to pry glued-down John Paul Jones and smash the glass covering all the switches and buttons.

Cutting it a little close aren’t you, Scarecrow??? Guess that’s why you were all hot and wet, errr, I mean hot and sweaty….phew! 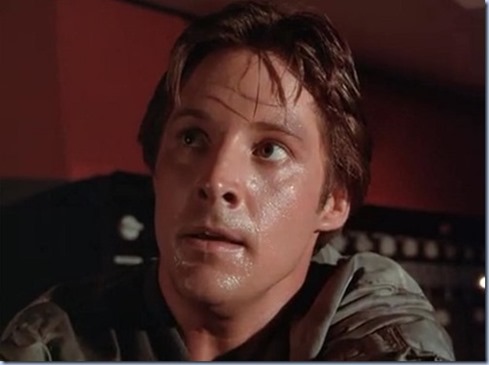 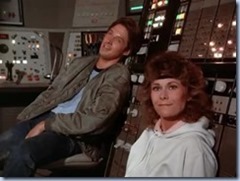 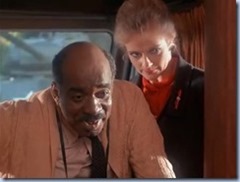 And now that everyone is suitably relieved, it’s time to get the Vigilant cleaned up and ready for Arizona!

WHO LEFT THEIR KEYS THIS WEEK?

Just how did the weasel-faced man start the Vigilant? Did Holt give the Survivors a spare key? Did he hotwire it?? Please don’t tell me the agent who drove it over left the key in the ignition???????????? Can I get a head slap? Anyone?   I’ve decided to give the Agency the benefit of the doubt and go with the Holt/spare key theory…thoughts?

And then the baddies must have left the key in the ignition right after Holt set the timer to blow up the dam. How else would Amanda have just driven right off? I didn’t know she knew how to hotwire a bus!?! 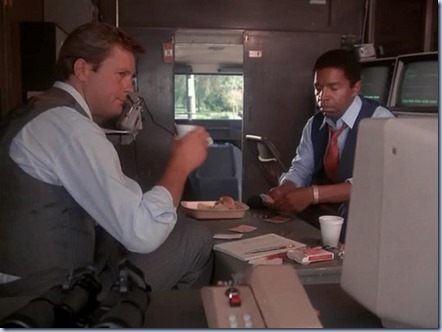 Finally! Our first Jack sighting and it’s Jack 2 (the guy on the left). Actually, it’s Agent Frank Duffy (thank you, raffie) but I’m calling him Jack. He is an agent in this episode. He’s sitting in the Diaper Duty van outside Amanda’s house keeping an eye on the Vigilant. Unfortunately he gets gassed! At least it’s just knock out gas though.

A: What am I supposed to be? Your secretary or something? L: No way, I wouldn’t think of it. A: What then? L: My caddy. Just joking! 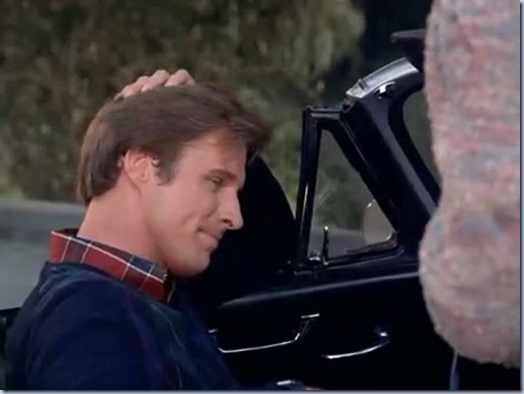 Awww, poor Lee. He just realizes he’s been outdone by Amanda…. She was the one to find out that Gordon Standish is a member of the Survivors and he didn’t! Nananana booboo.

When are you ever gonna learn, Lee?  At least we get a dimple out of it! 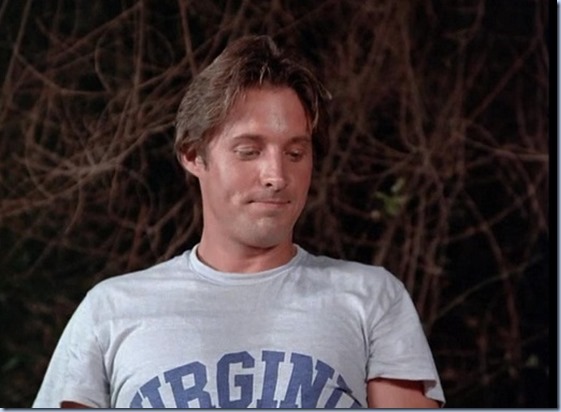 Will he never cease to be amazed by this woman??? What did he expect her to say? You’ve got the hottest legs this side of the Atlantic??? Or Pacific? (Is there a side to the globe? I can’t even use the equator! We’re all from North America, Europe and Australia….I know, this side of the moon.

A: That is so petty. L: Care to change your opinion?

ROFLMBO!!! So he does care what she thinks! At least about his legs anyway….. Can’t you just hear the sizzle going on here between these two? I love how neither of them backs down…or backs away. And they’re not even in an elevator!

I hope you enjoyed this post – as always, please let me know if I’ve missed anything!   And if anyone is interested in getting in on collecting stats, please make a note of it in your comments!  Next up is If Thoughts Could Kill, a.k.a. The Damned Duck Episode.

Here is the link to iwsod’s first post on Magic Bus.