Just before leaving the last scene.. can I check I’m not missing something? Lee tells his uncle he can’t ‘that night’ because he has a date – sounds like he is not talking about later the same day no?? then, we never hear Lee ask Amanda if she can do it on such and such a night! So Amanda has no idea what night it is..  What if it’s Monday and PTA?

what am I missing here?

Well, moving on we see a lovely nightscape of Washington DC.. wait a minute.. was that Lee’s old car we just saw drive along the freeway?? anyone with a clearer quality who can check it?

I bet we saw this transition shot in season 1 eps…but I don’t have time to go look for it! so if anyone sees it in their regular smk viewing please let us know!

Anyway, on to dinner… Hmmm Lee and Amanda are driving to the restaurant and there is a VO explaining the different car.

this is all very curious.. are they trying to make a point here with the dialogue about the car?? or was there a reason they couldn’t use the vette that night for filming??
Amanda: when do you get your car back?
Lee: tomorrow

Amanda: Mmm.. why did you have to take it in to the shop anyway?

Lee: Ahh it got a scratch. Some guy parked next to me and dinged it! [Man…he sounds so annoyed! Love how Amanda humours him by making a ‘Whooo!’ sound!]
Amanda: Lee, eventually all cars get scratched.
Lee: I know that, Amanda, I know that, but my car was almost brand new! And some Butcher comes along and mutilates it!!

I love how during this dialogue Lee is parking the car.. BB is being very careful to line it up so when he opens Amanda’s door it hits the parking meter! rofl! he is looking at it measuring how he’s doing!

Satisfied with the positioning of the car (LOL) Lee gets out to walk around and open Amanda’s door???!!!! Err is that a first?? anyone?? Lovely!!

I love that he’s cranky but still being a gentleman to Amanda- this is a man Amanda could fall for!!!

LOL.. although it could have all been in service of this next joke I suppose.. still I love it!

As he walks around Lee mumbles to himself: I swear the maniac did it on purpose. [whooo Love Lee in a long winter coat! Bringin sexy back!!

As Lee opens Amanda’s door he continues: I just don’t understand why people can’t be more careful!   –and Bang!!! He whacks the car

door accidentally on the parking meter next to the parked car!

He immediately sees what he’s done.. realises what he was 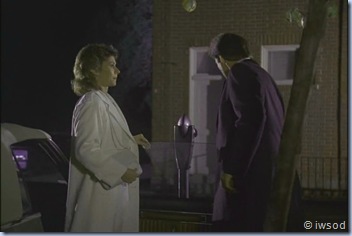 just saying.. eek! He stares at the parking meter a moment.. then looks up at Amanda stunned, she nods her head- not  criticising Lee

(wise woman!!) and Lee responds with a nervous chuckle.. (awh!!)

Amanda good naturedly smiles and lets it go without rubbing it in – if Lee had taken Francine, how do you think she would have responded? Not so graciously I am sure!!
Lee is very worked up – I think it’s because he is nervous about seeing his uncle.. it’s not really about the car or maniacs at all.. Poor Lee! Have no fear Amanda will support you!

Amanda walks away from the car, Lee closes her door and stares at the scratch on the car door

a moment 😆 then, wordlessly bends to check it.. give it a rub…then he turns back to Amanda and has a bigger laugh!

If that little joke is the reason the vette is not in use this scene- okay by me..I love the delivery!!! Lee is not in his super suave spy mode here!! and… I think it is adorable! 😆
Amanda smiles at Lee in response to his laugh 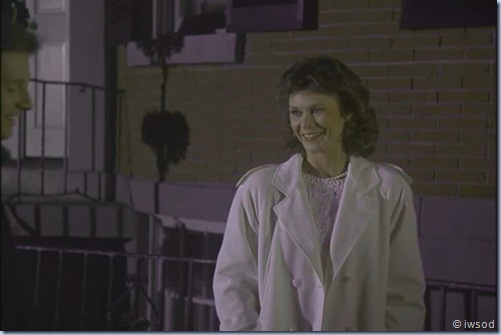 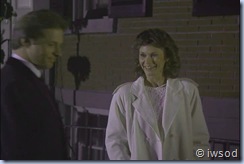 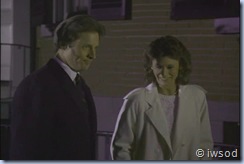 Amanda: How long has it been since you’ve seen him?

Lee: we had lunch in 82. [Hmm! so this is the first time he has seen his uncle since he met Amanda!]
Amanda: Lee that’s really terrible. 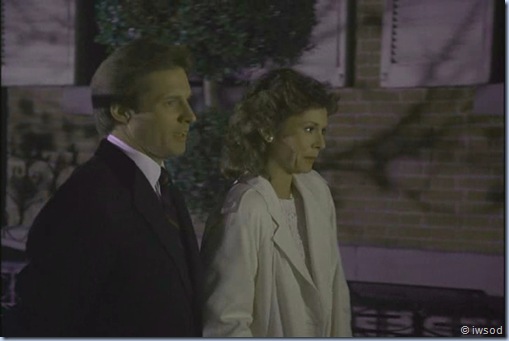 Lee: I told you we haven’t seen much of each other… [Lee is trying to sound so matter of fact.. but he’s not going to be able to keep it up

and.. he doesn’t have to – he’s safe with Amanda

…Besides!  Colonel Robert Clayton’s (or Bob the builder if you like) a very busy man.

Amanda: you’ve never said his first name before, you’ve always called him the Colonel or him or something-
Lee: or something worse?! – fab delivery! 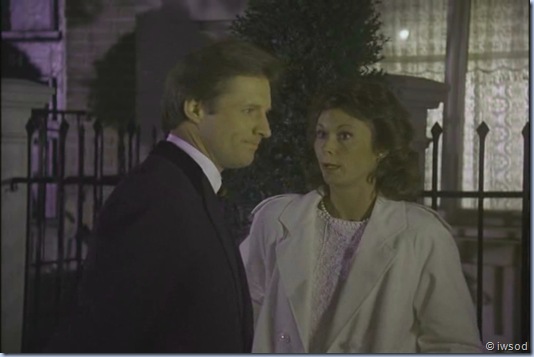 Lee: nah he doesn’t need anyone.

Ohhhh dear.. I suspect Lee has at times believed he doesn’t need anyone either! I think the two men are more similar than Lee would like!

No wonder Lee is nervous.. not only is he seeing his uncle, he is seeing his uncle when he is in trouble and not going to want Lee to help him!!! Lee does like to help those he cares about nowadays!

It increases the stakes here between Lee and his uncle doesn’t it?! I think Lee, deep down, does want to help- but doesn’t want to risk being even more rejected by his uncle.. so this line of Amanda’s gets to the heart of things..
Amanda: well sure he’s go 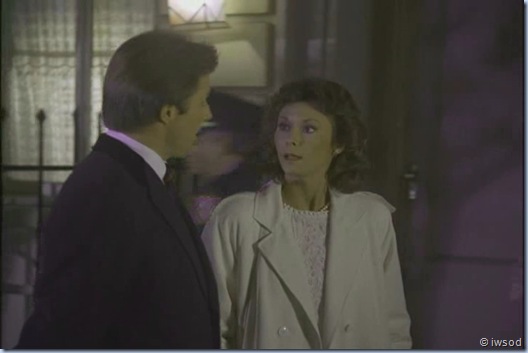 Amanda: you!! He raised you.

Lee: Amanda he didn’t have any choice, when my parents died he was the only one left.

Amanda pauses a moment.. then continues: Ohhh Nooo he could have said no.

Lee shakes his head: Not the Colonel! It was his duty, and he always does his duty.

Amanda: whoooo that bad huh!
They make their way up the stairs..backs to camera… 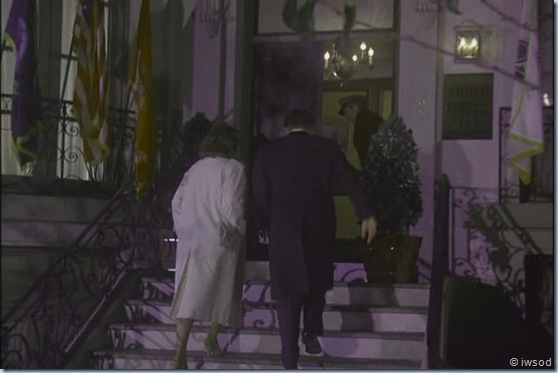 Lee trying to sound light-hearted: Hey! How many kids get to pass room inspection twice a week and learn the proper way to spit shine shoes hmm?? [I love how Lee skips up the stairs as he says this.. he’s really trying to be upbeat- but… it’s doomed to fail! ]

Amanda says hello to the doorman- Awh!! so in Character! 🙂 They enter the Armed Forces Club…

Room inspection huh.. this could be why Lee’s place up to this point has always been such a mess!!!! It’s a

rebellion!!!!
Remember Amanda cleaning in Saved by the bells?

I love the look on her face here!

This is interesting! I think in A Little Sex, A L

ittle scandal, Lee has a new orderly apartment (and from then on for the rest of the show I think his apartments are orderly..?)- Lee’s messy apartment was due to unresolved issues with his uncle.. and after this episode? he has resolved them!

Just a theory.. I can’t help myself.. Yes Morley– I too am psychologically minded!

[This does make better sense with this episode not mixed up with all the short hair eps] We could do a whole post on the journey of Lee’s apartments!

You know, Lee may not know it yet – but he has made a very wise choice in dinner guest tonight!! I do think it was a spur of the moment idea- the script says he looks around wondering what to do and then sees Amanda in front of him..(I think he implicitly knows too..) .. I also think if Amanda had not been able to do it- Lee would not have taken anyone else- after all he had told the Colonel her name.. and no one is going to pretend to be Amanda! I think Lee would have gone alone and made up an excuse.. but this is just my opinion and there’s no definite answer to this one- it’s all just speculation- feel free to disagree

Lee and Amanda are first to arrive

, Lee asks for a table by the window.

Lee and Amanda make their way to the bar to wait for the Construction Worker.. err I mean Colonel to arrive.. I love how Lee guides Amanda to her seat- he’s being very attentive 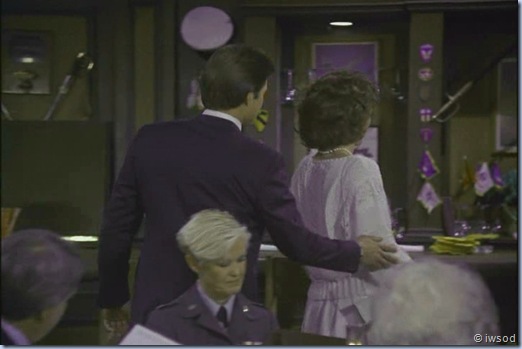 Whooo does this club look familiar?? I swear this is the same set they used for the Chez Tayir in Spiderweb- where Amanda has her date with Bryce Topping!!!
Here’s the bar in this ep…

Here’s the bar in Spiderweb being shot up..

It was behind where Lee was seated and had a few cake stands perched on the end of the bar!

Whoa! Amanda is wearing the same outfit too!
(with the one addition of pearls in this ep!) She even had on the same coat in the outside scene just now look! Here’s Amanda in Spiderweb: (she doesn’t take off her coat in Spiderweb)

and here she is in this ep- a close up of her at the bar (which is coming up):

and.. outside with the coat on: 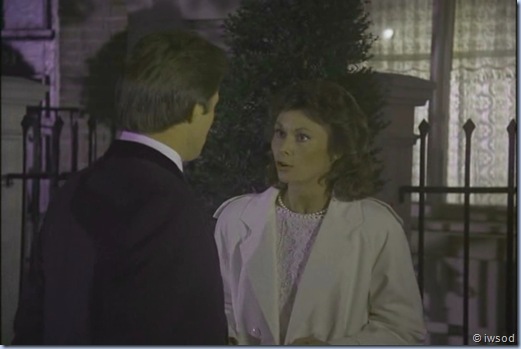 Weird huh! Go check it out.. it’s hard to capture the restaurant in one shot as they’ve done a pretty decent job changing how it looks.. Lee could be wearing the same suit with a different tie..but I’m not going to go out on a limb that far.. and they have done Amanda’s hair differently

Hey, what do you think the dialogue to do with Lee’s car getting scratched is about?? Why is it there??… Hm.. I don’t know….but a few ideas spring to mind: could it be a clue (among many) that Lee is more like his uncle than he realises?
Or.. could it be a little message- that everything in life gets a little rough around the edges with use – especially people.. and he can’t expect to be pristine and untouched by his upbringing? That’s life.
I don’t know.. just throwing it out there!!! anyone??

Drat I want to keep going! but.. this post is long enough already! I better stop there. We’ll leave Lee and Amanda taking a seat at the Bar to wait for  the Colonel for now! We are learning lots about Lee and his uncle, and how wonderful a friend Amanda is to Lee also

Soooo what do you all think? I look forward to hearing from you byeeee!!!