We rejoin Lee and Amanda at the Armed Forces Club.. sitting at the bar waiting for the Colonel.

Lee: I don’t believe it, this is the first time that I have ever arrived before the Colonel…. 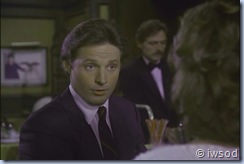 ha.. He must have forgot to 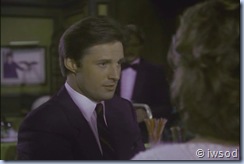 synchronise his watch or something. [interesting the script says Lee is displaying ‘cynical humour’ here. this

ep is very close to the script]
Amanda: Oh come on Lee.. you sound like you were raised by a machine.

Lee: Amanda I was ‘raised’ by a career military officer…

It amounts to the same thing. 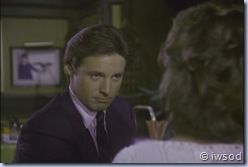 I suspect one of the things Lee likes least about his uncle is how his uncle gets to him so much – when with his uncle (or just talking on the phone!), Lee probably doesn’t like who he becomes: nervous, stressed, insecure, hesitant, hurt, angry, resentful.. it’s wonderful we have this episode to watch Lee deal with that, grow and mature: with Amanda supporting him.

This hostility of Lee’s could make sense of his very bad attitude in The Artless Dodger – Lee did not get along with the military types at all!!!

We see the Colonel arriving outside, he is accompanied by two army men.. Sergeant Roy Ballard and his aide Lt Paul Mauntel (so the script says).

They want to wait for the Colonel but he doesn’t need them..
Colonel: that won’t be necessary, Sergeant Ballard. We’ve all had a long week and I want you and Lt Mauntel to take the rest of the night off.

They try and convince him they are needed- aie!!. he doesn’t need a babysitter.. red flag anyone??!! So.. our first scene with the Colonel- and he is not as gruff as Lee makes out.. he shows thoughtfulness to his men and their needs.. I think it’s a hint that he isn’t all bad..
The Colonel heads into the club..

Back in club, Amanda and Lee still sitting at the bar..

Amanda: well you know, sometimes your family’s harder on you than anybody else but it’s only because they love you…

and they expect so much of you. [Lee listens intently to what Amanda is saying here.]
…I’m sure he really cares about you…

[Lee reacts to this – Nooooooo Lee isn’t sure of that at all!]
…very much. 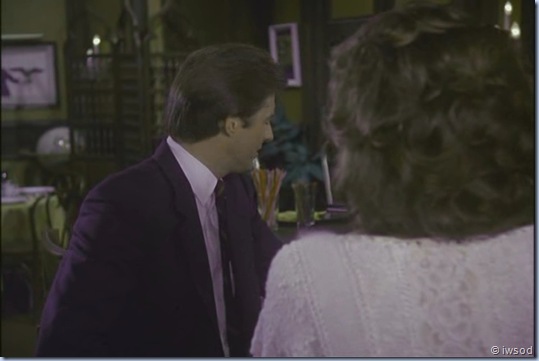 Lee: Ohhhh.. come on Amanda.. the man called me diaper duty till my sixteenth birthday. 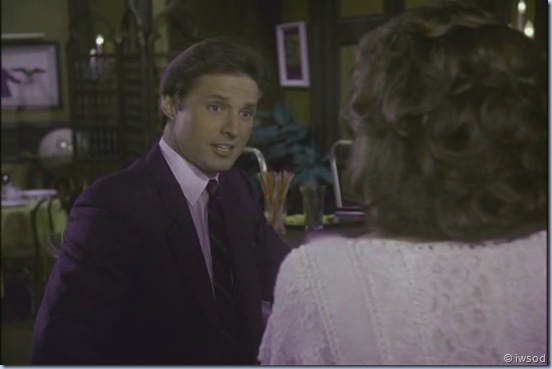 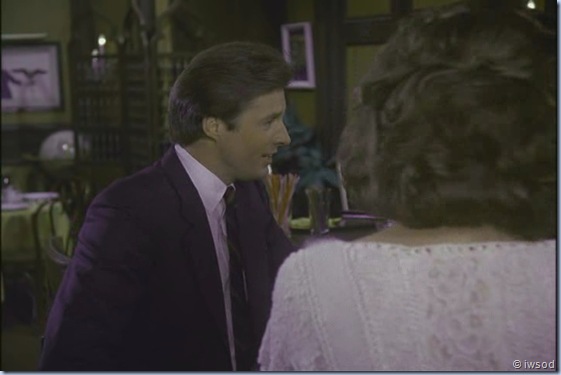 )  and very naturally says: Well he must have done something right. [At this Lee turns back to Amanda.. eh??]

…I mean look at the way you’ve turned out….

… Any man would be proud to have you for a son.

Ahh Amanda is so good at doing that!! She gives Lee the sweetest compliment he could possibly hear in that moment.. and she’s right.. The colonel isn’t that bad- because Lee turned out good!

Hey Lee! this is the kind of woman you could fall in love with huh!!

Lee has no verbal response for this..but I love the look on his face here the second it cuts back to him!

He gives Amanda a small smile-

and looks away with a bit of a bashful laugh – too cute! I wanted to hear his response.. but we don’t get one because before he gets a chance to respond- his uncle arrives.

Any thoughts you want to share about what you think is going on between these two?

I wonder if Amanda could have been so forthcoming with Lee if she was madly in love with him.. I compare this with how she is in We’re off to see the wizard- she is much more shy there (in the outdoor cafe)-and her words seem to mean much more to her there.. just speculating!!

I am struck by how easily Lee is telling Amanda about his uncle, about his childhood – He confessed he was called ‘diaper duty?!’ LOL! This is certainly a Lee who has changed!!! I can’t imagine the old Lee telling Amanda that when his parent’s died his uncle took him in – but didn’t really want him.. What was it Lee said in The Long Christmas Eve?

Amanda: Gee that’s sad… growing up without a father…

Lee: Some people manage to do very well without a father.

Amanda: oh I’m sorry I didn’t mean to get personal.

Awhhhhh Leee!!! Comparing now to what he said back then- I don’t think he is now saying he hasn’t done very well, but he is at least no longer pretending it didn’t matter or didn’t bother him- he is much more honest!

Lee now knows he has a friend in Amanda, whom he can confide in and trust.. and that is a good thing indeed! [After Spiderweb this fits well IMHO] It’s touching to see how much Lee’s character has grown since the early days.. when he was a lone wolf, ‘didn’t think he needed anyone’- could have almost been trying to behave like ‘a machine’?? ahem.. sound like a description of anyone else??!! The Colonel!!! Just a thought..

You know, I am not surprised the Colonel bought that Amanda was Lee’s long time girlfriend.. when he came across them at the bar, there would have been a very personal vibe- and the positive, intimate connection between them in that moment could not have been missed – not even by a military type machine!

Finally..*drumroll* we get to see Lee and the Colonel together!! Lee is bashful at Amanda’s compliment.. and the moment is interrupted by a voice off camera stating: Hello Skip!
LOL both Lee and Amanda jump! The Colonel actually sounds enthusiastic to see err ‘skip’ again!

Lee immediately stands up and stands to attention.. staring straight ahead like a good soldier..
Lee realises what he’s doing and relaxes a little.. looks to the Colonel, gives him a nod

and says: Sir! Errr Colonel, (He turns to Amanda)….

… Ah Amanda, may I present Colonel Robert Clayton.
(whooo ouchy.. not my uncle or anything.. so formal! His uncle shows no sign of minding..)
Amanda reaches out her hand: How do you do Sir.

Lee looks down at their hands shaking!
Lee sees his uncle give Amanda a huge, genuine smile 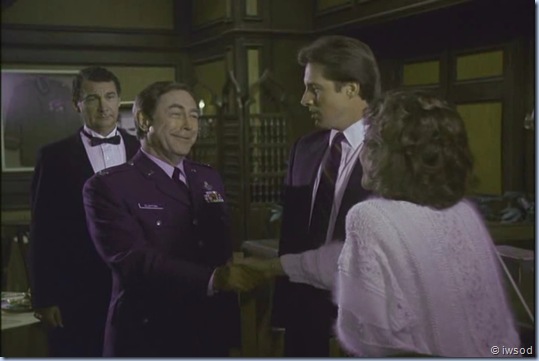 Lee then turns back to Amanda..

WOW!!!! Going through which screen caps to use here, I’ve noticed something lovely for the first time.. it’s very fleeting.. but as Lee looks at Amanda and says her name here – Lee smiles at Amanda and looks very proud to be with her- that I’ve noticed!! However, while Lee is doing this- the Colonel is watching Lee smile at Amanda, and he seems to be thrilled that Lee has found someone he can introduce to his uncle and be proud of! [see the pic above] I thought it was a fleeting awhhh moment! which hints that inspite of their prickles, these two men do genuinely care about each other!

Ohhh my.. the way Lee says Amanda’s name here.. is very swoony – and if it’s an act I’m convinced: he says her name like she is special, precious to him!!

The Colonel motions to Amanda: Delighted!…

Lee’s jaw is clenching here as he watches his uncle’s reaction.. Hmm interesting!!! I guess Lee is stressed..or relieved?? could there be a little ‘oh thank goodness he approves of Amanda!’ ??? thoughts?? do tell!!!

Col. Clayton continues: …Shall we take our table ?

[LOL at the Colonel being such a gentleman! I think Lee is watching him here thinking whoa! I didn’t know he had it in him!

]
Amanda to Lee: excuse me.
She moves past Lee to accompany the Colonel to the table.. my my.. could it be that Lee and Colonel have something else in common: a soft spot for Amanda?

The Colonel seems to be  a real gentleman- he pushes in Amanda’s chair for her.

Meanwhile Lee is confused- err no window??!!!
Lee to the Maitre d’ : I thought I asked for a window table. 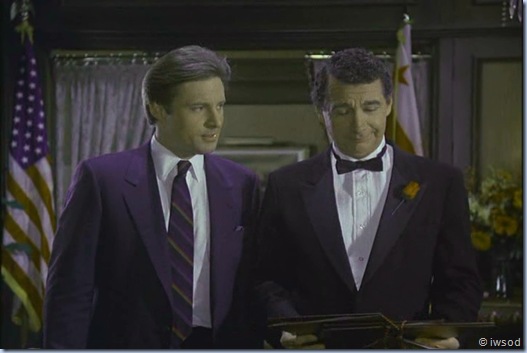 Maitre d’: Well the Colonel preferred this table sir.
Lee: Yes. of course.  (grrrrr Lee’s ticked already) This is an armed forces club – they would listen to a Colonel wouldn’t they!!
They check out their menus…
Col. Clayton: Some wine Amanda?
Amanda: oh yes Sir, that would be very nice. 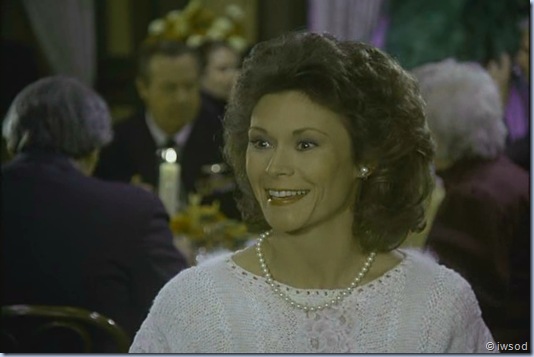 [Gah!! Sorry but not loving Amanda’s hair in this scene.. a bit Margaret Thatcher-esque!]
Col. Clayton (to the Maitre d’): A wine list please?

The Maitre d’ hands the wine list to the Colonel..
Lee doesn’t need one.. he speaks up: The Pommard is very nice. Especially the 81. [Lee is sounding pleasant, good on him for trying!]

Col. Clayton: Excellent idea. but I prefer the 82. [whooo the Col. did just pay Lee a compliment.. but it quickly gets cancelled out!]
Lee whispers: but the 81 was a vintage crop. 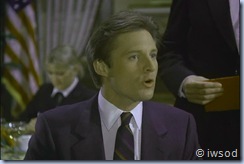 Col. Clayton to the Maitre d’: we’ll have the 82 vintage. 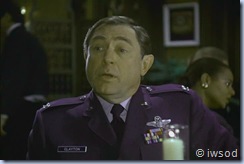 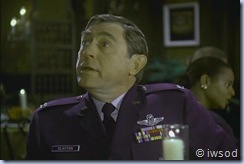 Has anyone had Pommard? I had to look it up

it’s a Burgundy! LOL.. sounds like the 82 didn’t have a vintage crop!.. this website suggests both the 81 and the 82 were lousy!

but Lee sounds so knowledgeable about wines!!!

Aie… The Col.  just ignored what Lee said! Lee just stares at him- dangers!!! Some strong feelings are welling up in Lee already.. The Colonel meanwhile is unaffected. I think Amanda notices.. do you?

Amanda: Well.. I don’t know about anybody else but I’m really very hungry tonight.

Col. Clayton: I like a woman who speaks her mind. [Aie! what a cliche thing to say

still I’m glad he likes Amanda – he can’t be all bad! but.. does he like a nephew who speaks his mind?? Hmm??]
Col. Clayton to Lee: your taste is improving skip. 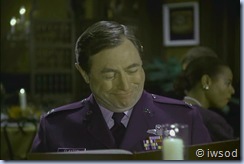 The Col. looks down to read his menu, a big smile on his face..
[my goodness.. he is sounding very oldfashioned 😆 I’m surprised they don’t have the Colonel check Amanda’s teeth or something teee heee.]
Amanda to Lee: Skip? 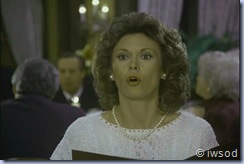 Amanda and Lee go back to looking at their menus. You think Francine would have let that one go? no way!! BTW- I think Diaper duty is worse!

So… the Colonel overrides Lee’s choice of table and wine year, oh dear… and calls him…. skip!!??? in front of his girlfriend??!!!!!

Sorry to do this to you my fellow SMK fans! but.. this is a long enough already and I’m going to need to split up this dinner.. I may as well stop here- right before Lee kicks the hornet’s nest!!   I look forward to hearing from you! byeeeeeeee!!