LOL!  Amanda begins searching for something.. anything!! Lee says she’ll know it when she sees it

and Amanda responds that he always says that- my goodness-these two know each other so well now!

Love how Amanda comes across Mauntel’s blue boxers right when she is telling Lee she will never get use to going through people’s private things!

[What is with this show and blue boxers?

This conversation is interesting.. Lee is not dismissing her, but responding to her concerns with guidance.

Lee: it’s all part of the job Amanda don’t take this so personally.
aie.. this makes me think of Spiderweb- and Lee searching Amanda’s house- I think both of them were taking that very personally.. was it before or after this episode?? it feels like after based on this conversation, and leads in nicely to how searching Amanda’s house was different- and personal!
Amanda responds: I know, it’s just that I respect 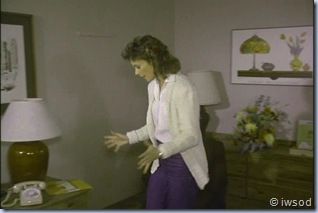 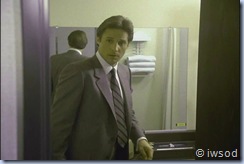 my room and-
Amanda’s voice trails off.. as she’s found something!
Calling Lee to her, she shows him an address she has found written on a hotel room service menu.. 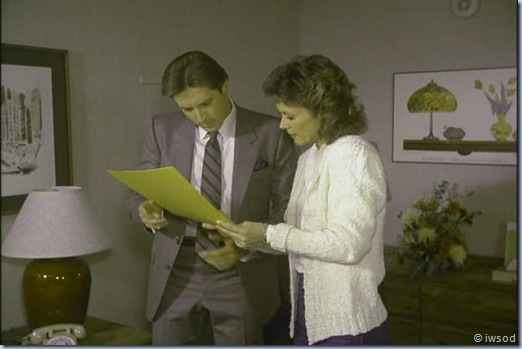 It might be something Lt. Mauntel jotted down so Lee treats it like a lead..
Amanda rushes to leave the room: Okay! Let’s go.
Lee: wait hooo hold it! (Amanda turns to look at him)

…We’re not going anywhere. I am…

[I love how Lee doesn’t look at Amanda at all as he says this!!! he knows she isn’t going to like it!!! ahhh I love how this foreshadows Over the Limit!!!]
Amanda: ohhhhh Leeeee!!!!!

Lee: Amanda, I may have to break into someone else’s house…

…and go through their personal private things!

[love the exaggeration! It’s both private and personal!] …I wouldn’t want to have to put you through that… 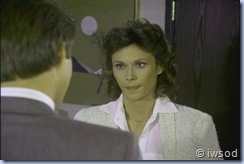 Amanda: call me in an hour… 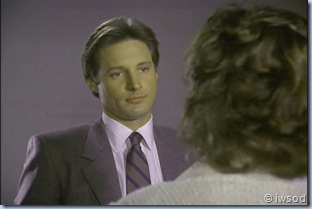 [ohhh my gosh.. these two are sooo coupley here! very sweet with each other! both jostling to look out for the other!]

[Love Lee’s quiet little smile here – he knows she’s true to her word and she’ll follow him! haaaa!  ]
...and if I worry

[Lee tries to put on his stern face..but he can’t quite manage it! 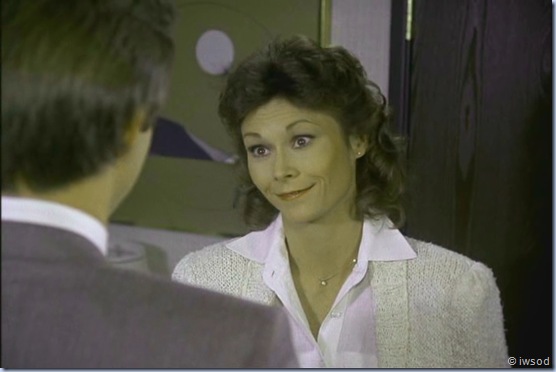 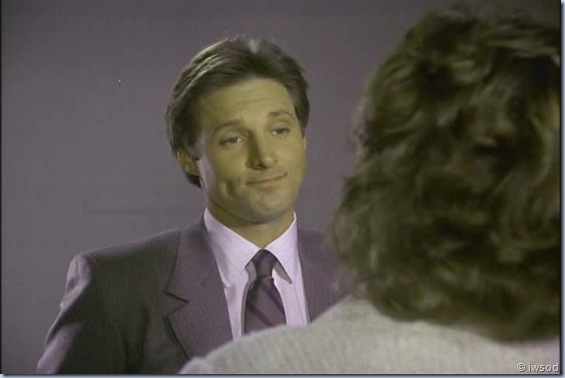 but I think it’s a sweet pain, the pain of having someone care about ya! 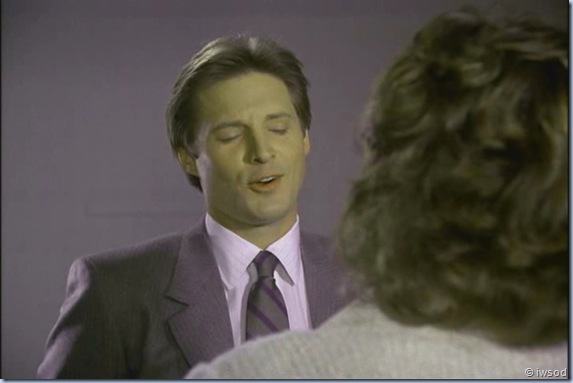 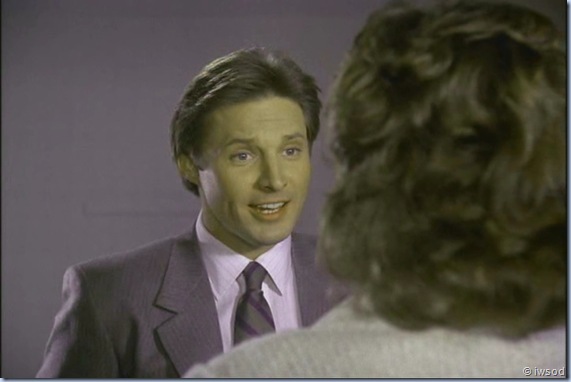 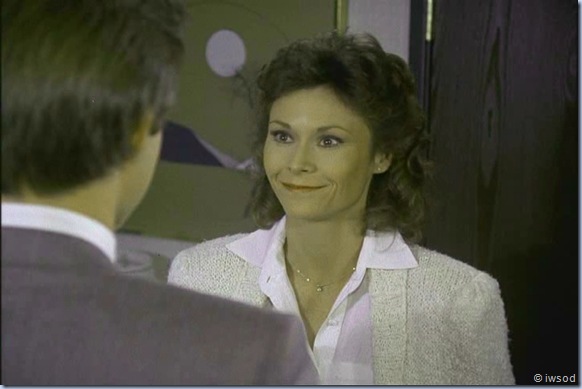 Don’t fight it Lee – you know deep down you really want to give in.. and let Amanda care about ya! 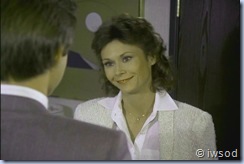 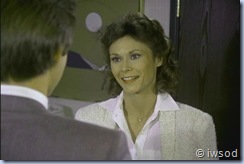 He takes her arm and guides her out of the hotel room..

Amanda: thank you.
Lee goes to open the hotel door but Amanda stops him with a hand on his chest (lucky girl) –

she peeks out of the peek hole to check the hallway haaaa.. Lee can’t believe it!

but hey.. I think good on Amanda! He’s just annoyed he didn’t think of it! 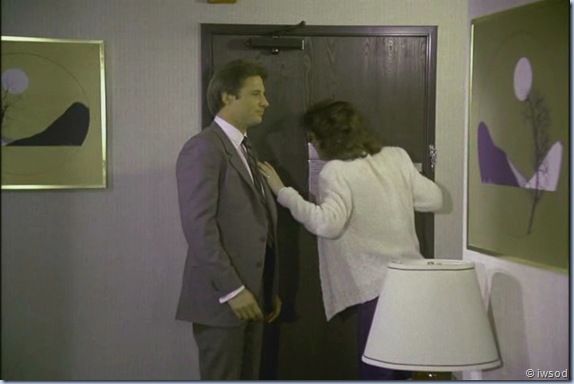 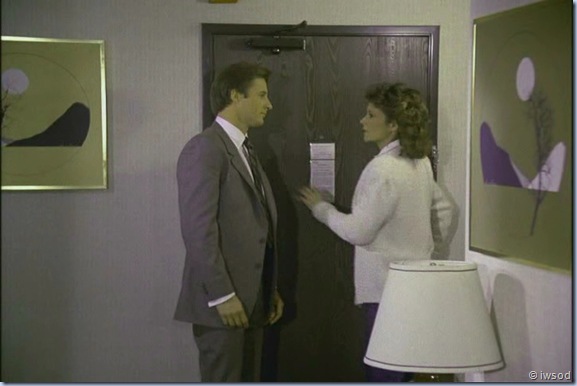 Amanda: positive. [LOL I don’t think she picks up on his sarcasm, the moment her hand hit his chest her mind went blank

I know mind would!]
Lee: okay? good.
cheeky!!!! I swear they are such an old married couple here!!! I think he’s annoyed..but still finds it kinda cute!

This is a very sweet scene!! Does it remind anyone else of the scene in Das Geisterschloss where Lee tries to get Amanda to stay in the car?? and he tries to control his frustration because he knows she has him?! Only this time, he is smiling and enjoying himself

To me- it’s utter honesty here between these two! They both know what the other is up to.. they both know the other’s faults, and accept each other, they both treat each other with care here.. Lee knows Amanda really wants to come, but he wants to protect her and not have her feel bad about it – so comes up with this new strategy of helping her avoid danger or LOL- the pain of invading people’s privacy! good one!!! Amanda is honest that she knows she’ll go after him if she doesn’t know he’s alright! She’s tried in the past.. but it’s just no darn good..

Lee, she needs to know you are alright! and don’t curse it because if Amanda was not like that – well.. You (Mr Pilgram’s Peach Puff) would have been dead by the end of the first episode! Deep down.. I think Lee is genuinely touched at how Amanda cares for him, and looks out for him- he’s starting to become more comfortable with this, and to actually enjoy it a little

In the context of this episode and what we have learned about Lee and his upbringing, being left by his uncle to fend for himself more or less.. it’s even more touching that Lee has Amanda to care about him – Lee’s not alone anymore!!!! He knows this now, and he’s accepting it

SMK does this progression so beautifully – by building their friendship, we don’t skip all this good stuff!!! We really are (IMHO) given the whole of their love story –the very meaningful and touching parts- not just the sexual tension and the drama.. Is it just me or are tv shows these days missing out on the good stuff like scene, between their characters? Ohhh I could go on and on.. but I’ll stop there: can’t wait to hear what you think!

I shall finish up there for now.. as always I’d love to hear your thoughts – Isn’t this part of the episode fabulous?? so full of Lee and Amanda goodness!!! Can’t wait to hear what you think!