The Psychology of SMK Costumes

Hello everyone! I am excited to be sharing with you my first post as an author on “Just Walk With Me.” I was a teenager when SMK first aired and I knew I liked it, but it wasn’t until about a year and a half ago that I learned to really appreciate it. I am so happy to have found this blog and all of you and I am grateful to Iwsod for encouraging me to write some posts. I hope you enjoy them, Morley.

Ernest Harms, in an article in The American Journal of Sociology, states “Dress is founded primarily in the world of emotions. It is not only a kind of covering but also a kind of mimicry through which man expresses many of his subjective social sentiments…. It intimately expresses his relation to his environment.” In fact there is a growing field in psychology  referred to as “Embodied Cognition.”  Embodied cognition explores the theory that “we think with not only our brains, but with our physical experiences including the clothes we are wearing.” (Jordan Gaines, “Brain Bubble”).  In light of this theory I thought it would be fun to look at the clothing choices for Lee, Amanda, Francine and Billy and see what it might reveal about how each of those characters view and respond to their environment and themselves over the course of the show. So pull up a couch and some “tootie fruitti” and lets discuss costumes, Dr. Pfaff style.

The show opens and our first image is that of a toga party where everyone is in costume, actually everyone is in the same costume. I am trying to think of a reason why it would be a “toga party.” Maybe it hints to they way society was during Roman times, decadence, hierarchy of leadership, political intrigue? Or maybe it was just a fun choice.  As everyone goes inside for the costume judging one lone figure remains behind.

This is our hero dressed in white posing as a waiter, alone left to complete some brave, desperate deed. I think there is some significance to this costume. Bearing in mind that the producers could have picked any scenario I try to find the purpose for the one they picked. I guess they are trying to tell us something about Lee. As an agent, he is behind the scenes, unobtrusively being a servant to the rest of us, like a waiter is. And he is dressed in white, he is the good guy.

The next thing we see is a woman coming down the stairs of a white suburban home in her nightgown. It is Amanda and she is pulling on her coat to take her boyfriend to the train station.

Here is the complete opposite of Lee in an undercover costume. Amanda is not even dressed. There is a website that helps people organize and clean their homes called www.flylady.net.  FLY stands for “Finally Loving Yourself.” The Flylady has some interesting theories about why a person would be disorganized and how to become more organized, but one of her ideas is that upon waking, a person should get completely dressed even down to their shoes. It is one of her steps to “finally loving yourself”. Check it out if you want to. But here is Amanda about to go out in the world in her nightgown. I wonder how she actually feels about herself? Is she not really engaged in life? Is she even a bit depressed, or maybe her life is so hectic that she hasn’t had time to take care of her own self? Maybe she doesn’t feel a worthiness about herself to be concerned about how she presents herself to the world. Maybe she just didn’t have time that morning? Well, for whatever reason she is in her  nightgown, covering her state of undress with an overcoat. It is interesting to note the colors here. Her night gown is light blue. Blue is the color of trust and peace, but it can also suggest loyalty and integrity as well as conservatism and frigidity. She covers it with a brown coat, brown being a serious, down to earth color that relates to security and protection. Both of these colors are in a muted form.

And then these two worlds collide 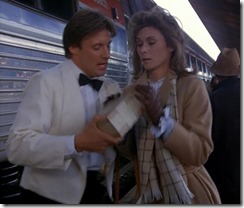 The disguised hero and the underdressed heroine.

The next thing we see is our hero a bit tattered, his white coat is soiled and torn. I think we sense the sacrifice he makes protecting the innocent. He enters the elevator. I think it is interesting that the elevator is full of costumes, it is like a portal.

We still know nothing about him except that he is a man in disguise, kind of like a superhero, hiding his true identity.

Billy appears fatherly  with his sweater vest and earth tones. And we meet Francine. 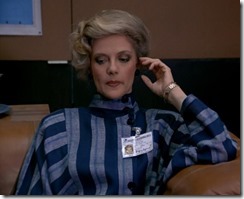 Francine is a fashion statement, but right now it looks like the statement that she is making has something to do with being a prisoner. I wonder what imprisons her?

Lee’s next appearance is another costume, this time he is dressed as a pirate. Pirates are rogues and uncivilized and can sweep a young innocent girl off of her feet and into a life of  danger, excitement, intrigue… Think Pirates of the Caribbean. Hmm, is this what is going to happen to our loyal, conservative, lady who covers herself with seriousness, safety and protection?

I love this next scene, leave it to a little boy to tell it like it is. “Gee, you look great, Mom.” And Dotty remarks that Amanda looks “awfully fixed up”. I guess Amanda hasn’t been doing her hair and wearing make-up very much lately, she has been looking frazzled instead, and feeling that way too. A sure cure, get involved in espionage, that should help with feeling frazzled… 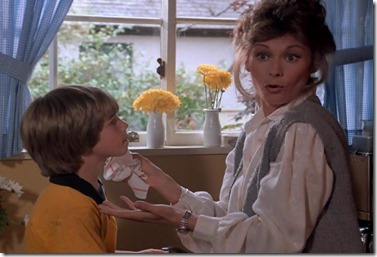 And now to another costume party.  And we see Lee in…another costume. This is Scarecrow the suave, lady-killer extraordinaire (and he knows it) 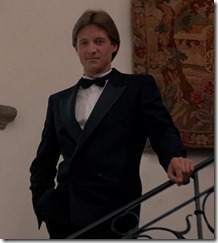 This party really has some ridiculous costumes. These seem like they are supposed to be some very upper crust people dressed as…

Yes, these people are Lee’s friends. And these “friends” find it crazy that Amanda would come “dressed as a housewife.”

What I find interesting here is that Lee has only been in disguise since the episode started and Amanda has gone from being in a nightgown to getting “fixed up” even as she begins to realize that she is “hideously underdressed”. I wonder if Lee realizes that his disguise as “lady-killer” isn’t going to work with her? There is still a discrepancy between them in their choice of clothing and how they relate to their environment and what they choose to project to the world, but already they are drawing one another out. And actually this scene ends with them both getting drenched and Lee looks like he is trying to cover her with that brown coat of hers. 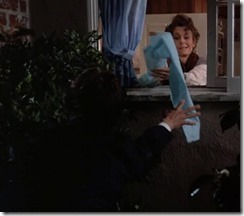 This just makes me think that those disguises are coming off with each other’s help. When water falls on us, we all get wet.

What I find most noticeable about their clothing here is how similar they look and I think that is on purpose. Here they are together, equals almost. No longer an undercover agent and an underdressed housewife, here they are two people trying to work together to solve a problem.

Amanda is now brought to the agency. She is wearing a rather homemade looking pink cardigan, over her shoulders. She looks very naïve here I think. Pink can indicate unconditional love and nurture, but it can also be immature, silly and girlish… yup, I see that here.

And Francine is still in black and gray, still in lines. She is “today’s woman” or so she says.

The next scene is the one at the Jefferson Memorial. What strikes me about the clothing choices here is that both of them are holding their coats. It is like their covers are off and in this scene they are sharing honestly for the first time, the first of many and that surprises both of them, I think.

Lee is also looking rather disheveled.

. Of course their over coats are back on for the late night information exchange, Amanda is now in costume, spy costume and Lee calls her on it.

I think Lee thinks its cute that she tries.

Note that his coat is open.

The last part of this episode has Lee in a suit and a blue sweater, once again blue being a color indicative of trust and loyalty. Amanda is also in a “costume” that would indicate loyalty and trust. It is her Jr. Trailblazers outfit. Lee notices it at some odd moment in the helicopter, “What are you wearing?” he asks her incredulously.

The way they end the scene with Amanda coming home, popping the dinner in the oven for Dean, and pretending like nothing out of the ordinary has happened is interesting. She has joined the world of disguise, but she is disguised as a Jr. Trailblazer leader.

She is brave, resourceful, loyal, patriotic, and in charge of the situation, or at least that is what her clothing is trying to project.

The tag seems to establish the characters for the rest of the shows.

Billy is in a comfortable cardigan, Francine is still in black and gray. Lee is in a double breasted suit not a blazer but not a tux. Amanda is in a loosely woven jacket and denim looking skirt.

I love this ending shot. Both of them under umbrellas, Amanda with a delighted look on her face in her comfortable, but neat looking clothes. Lee with a horrified look on his face wearing his double breasted, quilt lined, belted black overcoat (seems like some extra layers of protection for him).

I don’t think I will go into such detail for each episode but this one was so full of fun costume and really sets the stage for the rest of the show by introducing us to the characters. I think the clothing choices told us a lot during this one. I hope you enjoyed it. I like going under the surface a bit, there are a lot of treasures in SMK to dig up when you do.

This entry was posted in General SMK, Season One and tagged 80s TV series, costume design, Scarecrow and Mrs King. Bookmark the permalink.

31 responses to “The Psychology of SMK Costumes”