1/2 SMK Stats: Always Look A Gift Horse In The Mouth

Hello Everyone!  It’s about time for a break from evil Rita pictures so we can take in some dimples!

While there are some lovely comedic moments in this episode I must admit it is not one of my favorites.  And that scene where the white-haired baddie is singing is one of two scenes in the entire series that I fast-forward through….fortunately it does not fall into any of the stats categories!!

Well, off we go!  Hope you enjoy – and as always, would love to hear your thoughts!

Ahhh, more of these dreaded things….. 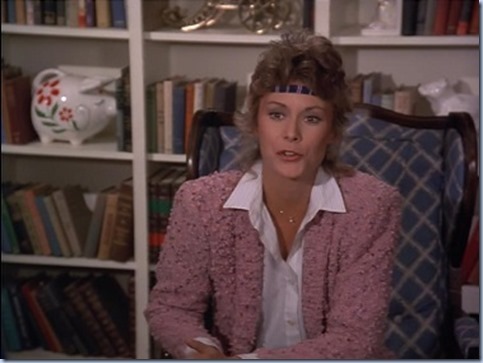 I just have to say…who was on set design that day?  The snake-like Amandaband almost gets lost between the bubble gum sweater, the books and curios plus the pattern on the wing back chair.

And here we have our second Amandaband of the episode.  At least this one doesn’t look like a snake.  But look!  Wardrobe bleached the bubble gum sweater!  Please tell me they only have this in two colors…..

I just love these Amandarambles.  I hope you don’t mind that I include as many pictures as I do.  It’s just that KJ has such awesome facial expressions I feel the need to capture them to show them off on her behalf.  This first ramble is in Billy’s office.  Amanda is wearing her lovely Fraulein Maria outfit that even the poor didn’t want – hahaha! (thanks, Iwsod).  She also wears it in TGTN at the Honeycutt Typewriter interview with Mr. You look delicious in blue (thanks, Melissa Robertson). 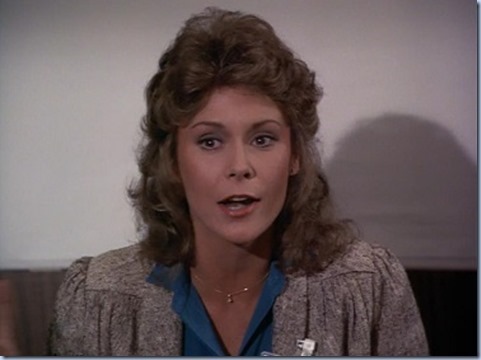 A: Oh sure, oh yes sir, and well I want you to know how proud I am to work for the agency. 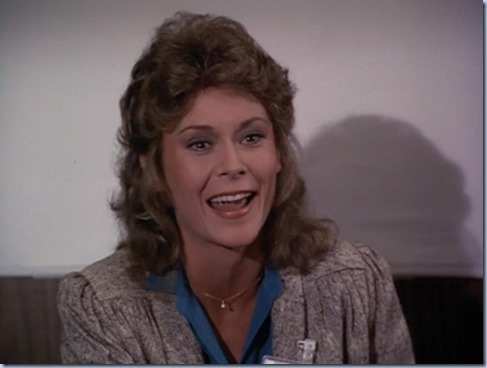 I think out of my entire graduation class I am the only one of us to go on to become a spy.

She’s beaming with pride as she says this!

Of course, I suppose, if there were any others I wouldn’t know about it,

I think Lee and Francine are both feeling a little bit embarrassed for her. 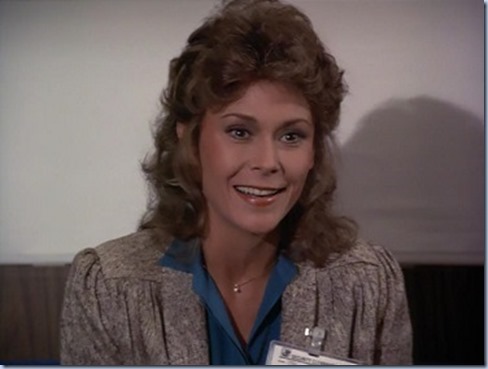 but…well at any rate, sir, um, well I’m not sure that , that you realize it, but sometimes these cases that I’m sent on, well they get a little dangerous, and well I was just wondering…. 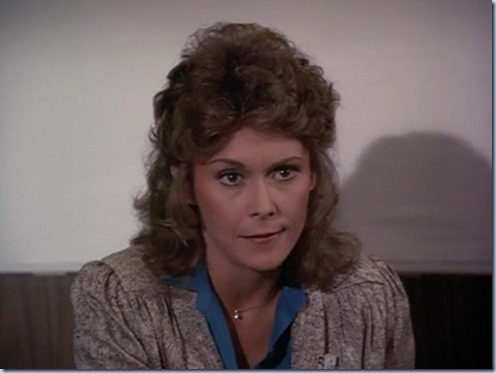 shouldn’t I know how to hit?

See what I mean – I couldn’t get one eyebrow to do that!  Can you?  At least not without contorting the rest of my face.  She can do it and still look good!  Maybe I’ll start practicing in front of the mirror.

Billy is just plain dumbfounded!  And his hair is looking a little scruffy today compared to normal.  Guess this is as close as we’ll get to a hair don’t for Billy!  hahahahaha!

Our next ramble happens right before the trip to Bo Johnson’s ranch. 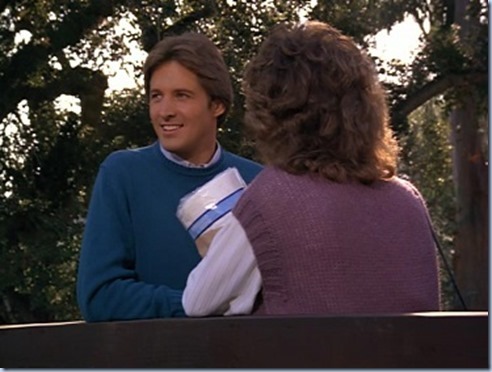 A: Look, I’m sorry. I wish she’d said he was a smuggler but she didn’t. She said he was a snake…gosh, do you have any idea how hard it is spying on this poor woman?  (Pardon the interruption, but duh, Amanda, you’re talking to a professional spy!?!)   She thinks I’m her friend. She’s afraid she’s losing her husband. And you know what? She’s so lonely she’s invited me to go to Bo Johnson’s ranch for the weekend.

Okay, okay, I know that Amanda means it is hard to spy on Penny because she is a friend, not that it is hard to actually spy on her.  But do you think for a minute Lee is factoring in the friend part?  I don’t.  I think that’s why he looks totally uninterested in what Amanda is saying.  At least he lets her get it all out before he tricks her into going with that story about Devil’s Island.

I wish.  Guess I shouldn’t get greedy…I mean we did have one wink in the last episode.

Unfortunately there’s not a lot of touching this episode.  But what little there is, is all Lee…

I know he’s attentive and all, but geez, he sure does like to touch Amanda!

I studied this frame most carefully and I’m fairly certain his right hand is touching her left forearm.

Almost looks like he’s puckering up for a kiss, doesn’t it?  LOL!

Look at his right hand on her!  Who does that???  At this point they’ve known each other, what, 7 weeks?  I don’t know any guys who do that.  Or remember any guys who did that when I was single.  He just can’t help it!  Or is this part of his playboy persona?

Ever the gentleman – helping her off that crazy horse! 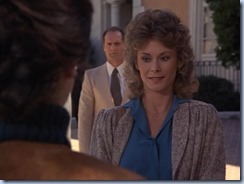 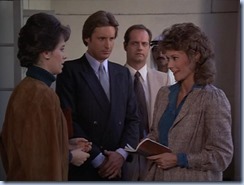 The Jacks are back!  And Jack 1 even gets a line of dialogue – woo hoo!  After Penny and Amanda are in the bathroom too long he says, “Someone’s gotta go in there!”  Go Jack 1! 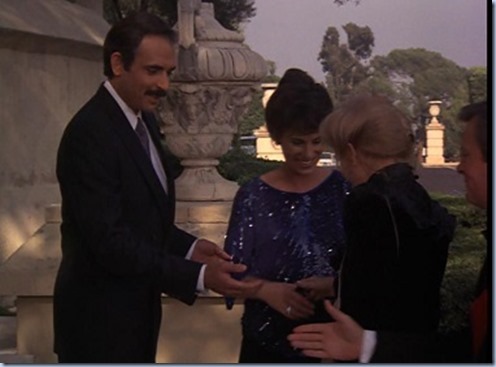 And here we have Jack 2!  See his profile on the right – that’s him!!  Here is is playing some sort of high ranking official as Lee calls the guests. 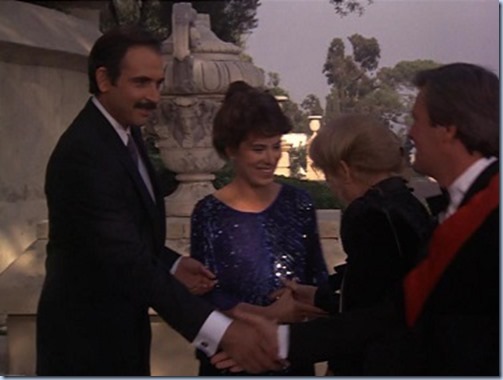 Here you can more of him, but a little less face.  Nice sash!  Trying to find this guy is a bit like reading the Where’s Waldo books!

Another Jill-free episode.  Actually, I think the blonde woman arriving with Jack 2 in the above pictures could be Jill but we do not get to see her face or enough of her profile to say.  She’s got the right hair though! 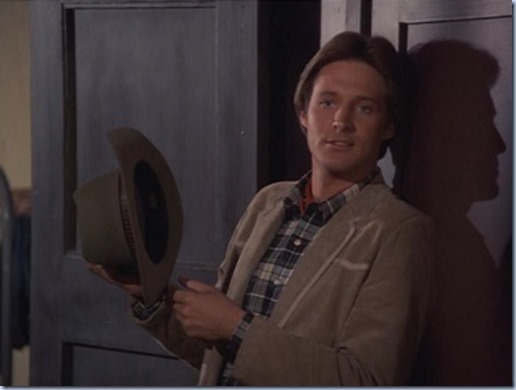 Damn Amazon Prime or WB or whoever is to blame for this fuzzy plaid picture….the DVD’s are just not as clear!

This is a little better.  OMG, even his profile silhouette is super handsome!  It’s getting warm in here…. 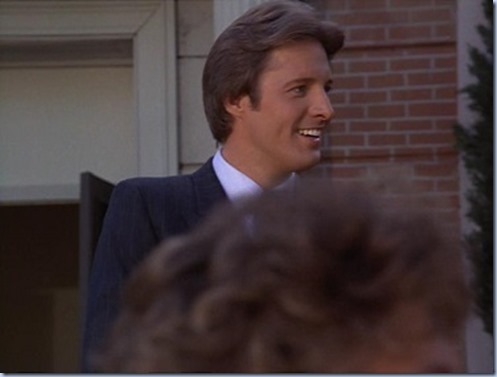 L:  Your highness, may I present Mrs. Amanda King.

Cute the way saying her name makes his dimple come out!  Awww…  Is it just me or does anyone else see more of BB as he looks today in this picture than in all the other ones?  Wish the two sourpusses weren’t in the background. 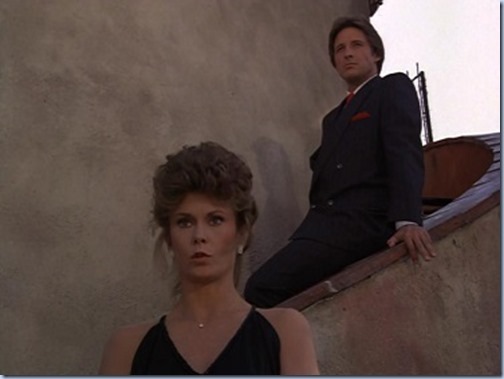 Ahhh, now we see him do his cheek muscle thing…yowza!  (I got lucky again, Rachael and managed to capture it!)  Can you see it everyone?

He shouldn’t be allowed to look so good while being so smug.  No wonder she can’t say no.  I’m surprised she’s still standing.

Not so crazy about the dialogue or delivery here, but sure am enjoying the visual! 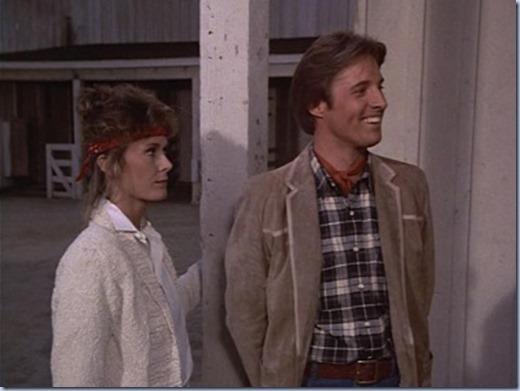 A:  Eyes straight ahead scarecrow!

That’s it for now!  Hold yer horses, part 2 is just around the corner.  Yippee kai aye yo get along little doggies….can’t ya just hear the guy singing….  Sorry for that.

Just couldn’t help it.  I wonder what that phrase even means.

Here is the link to Iwsod’s first post on this episode.

Thanks for reading – hope you laughed!

This entry was posted in General SMK, Season One, SMK Stats and tagged Scarecrow and Mrs King, SMK, Stats. Bookmark the permalink.

21 responses to “1/2 SMK Stats: Always Look A Gift Horse In The Mouth”