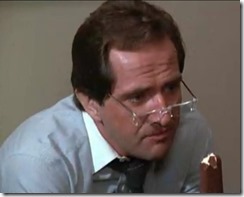 There is a theory that is used in counseling to explain why one person is often drawn to a certain personality type in relationships. This theory states that our first experiences with love come from our family of origin and so we identify “love” with that type of personality or relationship. This can be a positive or a negative pattern. For instance a woman who had an alcoholic father may be drawn to men who have alcoholic tendencies because she identifies that type of behavior as “love.” Or a man may be drawn to a dominant, controlling woman because his mother ruled the house. These would be examples of a negative pattern. On the flip side, a man or woman who experienced a loving and nurturing home and relationship between his/her parents would more likely be drawn to a person who would love them that way.

Ok. Well how would this theory be used to explain Lee Stetson and his many blonde  “kid” like women?  Or how would it be used to describe his falling in love with Eva? Could it even be used to help us understand his hot and cold response to Amanda? I think so.

First I think we need to take a tour of the women we were introduced to on the show. Hang in there, I know this could be uncomfortable. We don’t like these ladies because we are protective of Amanda, but I think Amanda took them in stride, so we can too.

First there was the flirtatious brunette at the costume party. 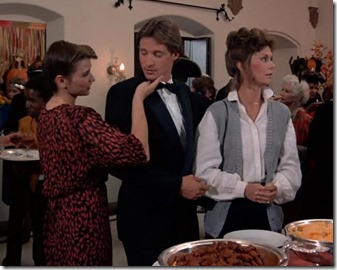 Lee gave her a passing glance, although I wonder at her forwardness. She must have known him and he her. Maybe they dated, maybe they were aware of one another’s reputation. I guess we are supposed to think that Lee is admired and feels free to admire women. Amanda was just annoyed by this, I think she is getting a pretty clear picture of this man who has just inserted himself in her life. This brunette doesn’t get a name and we don’t learn any history of a relationship.

Then there is Celeste, Celeste van Cresswinkle. 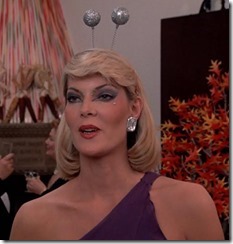 What a “costume” huh? I agree that she has a rather masculine feel about her. But she approaches Lee in a very alluring manner. He seems friendly with her, but he doesn’t seem flirtatious. I wonder if that is because Amanda just gave him a hard time because of the brunette or if it is because he has already had his fun with Celeste and has moved on.

We don’t really hear or see about any other women until Sudden Death. Here we have the blonde cheerleader. 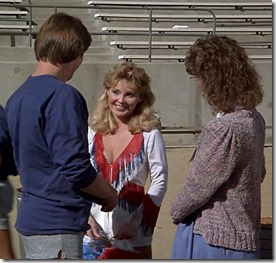 Lee certainly gives her some attention, although I think he may be putting it on so that he can get his attention off of Amanda, he needs to move on after the shock of that kiss. Yup, right, Amanda is NOT your type, Lee. She is not a flirtatious, alluring, fluff  kind of girl and that seems to be the kind of woman that gets Lee’s attention at this stage.

The next episode in which we meet another one of Lee’s women is Remembrance of Things Past. I know this one give some of us hives… The backgammon discussion. Yup, Francine. 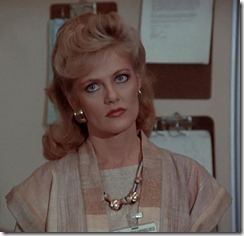 I actually captured this picture right at the time that Lee was making his comment about it having been a while since he and Francine had played backgammon. She does not seem thrilled here. Actually, as I think about it, most of these women that  we meet through out the show are not very thrilled with Lee at that moment, are they? But we know Francine and she is a professional and a friend to Lee at some level. Some how he hasn’t burned all his bridges with her.

And right after we learn about Francine, we meet Eva. She is the hardest for me (and I would assume most of you) I think because Lee acknowledges that there were some emotions invested here. I don’t think he was invested in any of the others we have met yet, but he tells Amanda that he would have asked her to marry him if she hadn’t accepted Angelo first. That tells me that Lee could conceive of marriage at one stage in his life, but also that he wasn’t very good at really getting to know someone (or he would have had an inkling at least of her duplicity) and he also isn’t good at communicating feelings (she didn’t know he cared that much, or her KGB assignment was Angelo first then Lee?)  Any way that didn’t end too well

Or maybe it did end well? Because Lee learned the truth about Eva, about what love isn’t, about true friendship and even more about Amanda? 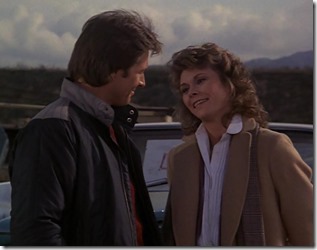 The next woman we meet is… um… yes that is it… Phyllis? Phyllis Pratt. 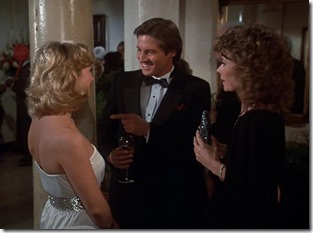 Why can’t he remember her name? She said he “usually” sends flowers, right? So he must have seen her more than once. And he must have gone out with her fairly recently, or at least right before she left for Gstaad. Maybe he has been too distracted by everything that went down with Eva and enjoying the growing friendship with Amanda in light of that, he just put Phyllis Platt and flowers out of his mind?

We actually don’t meet another woman of Lee’s until the later half of season 2. We hear about Gillian and Margot, but all we know about them is that they weren’t around very long. Gillian didn’t last much longer after the botched Pocono weekend (Lee spent it in the Alps with Amanda instead), and Margot “took off” with a pilot (I think?). The next woman we meet is Randi Baby… 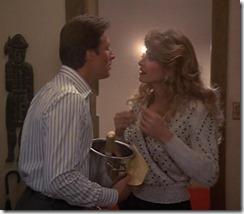 And I don’t get the impression that he is very into her, even though he is trying… And I don’t think she is very impressed with him by the end of the episode. 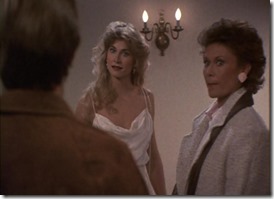 I think her exact words were, “That’s it!” I wonder what Lee was telling people because Francine makes a comment in DOA about Lee dating a girl named Randi. I can’t imagine him chasing that woman down to continue a relationship with her, maybe he dropped her name every once in a while as the latest (last) person he had dated so that people wouldn’t think he wasn’t loosing his touch. After all I don’t think he was dating too much at this point, he was probably “too busy with work” (in other words: enjoying Amanda’s company). 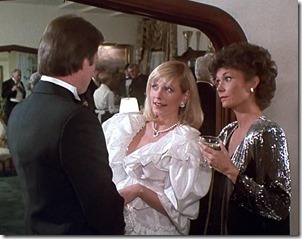 and Lee is not interested. Amanda is amused and comes to the conclusion that Lee must not be feeling well. This flirtatious piece of blonde fluff is not grabbing his attention. Hmm? Maybe Lee’s taste in women has changed a bit?

So, to recap, here are the women we believe Lee has dated or shown interest in, that we have met so far…

Other than the first one at the party and Evil Eva, I see a pattern, don’t you?

So back to my first comment about relationship choices and family of origin experiences. We know about Lee’s early childhood loss from ACM Kid, but I don’t know if Amanda does, and so far we haven’t seen any pictures of Lee’s mother. But even from here I would hazard to say that Lee is not spending his time with women who would be good wife or mother material and the one woman that we do know of up to this point that he picks to invest his heart into turns out to be using him in the spy game. I wonder what this experience with Eva did to Lee though? I wonder if it didn’t reinforce some deep seated belief that Lee was not worthy to be really loved, or that if he did open his heart to love it would be torn from him in one way or another based on his experience with his family of origin? It might have convinced him at some level that blonde, frivolous, fluff type women would be safer for him.

There is one other important woman in Lee’s life that we have met though, and I want to place her in this post because I think her presence in Lee’s life matters. 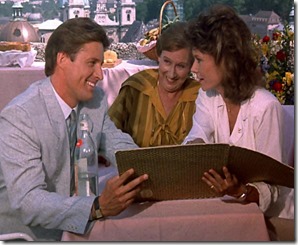 Lady Emily Farnsworth, I think, is important to who Lee is. He could have been trained by anyone, but his first superior was a woman who was brought into espionage the same way that Amanda was. She is a normal woman living in an extraordinary world and managing just fine and Lee respects her and, I believe, loves her. That is a good role model for motherless Lee.

So as we go into season 3 (and the arrival and quick departure of Leslie) it will be interesting to keep these thoughts in mind… I love this stuff!!! Thanks for joining in the walk, it is so much fun to stroll together

This entry was posted in Character Discussion, General SMK and tagged Scarecrow and Mrs King, SMK. Bookmark the permalink.