Amanda walks out the front of her house and there is Retzig! He is stunned to see her approaching him.. (I’m stunned to see him at Amanda’s house – how does he know where she lives?!)

Retzig reaches for his gun but quickly realises Amanda’s brain is kerbluey and he doesn’t need it.
Amanda strides confidently toward Retzig

saying: Well!!! Old Bill is getting to be efficient! I like to see that! (Amanda holds out her hand to shake his) hello. I believe I’ve seen you at the agency but we haven’t met have we. I’m Amanda King. 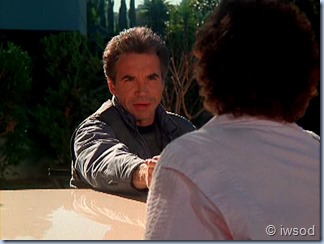 Retzig: Logan. Niles Logan. [what the draft script had as his name the whole episode.. I wonder if the name is significant to someone..] 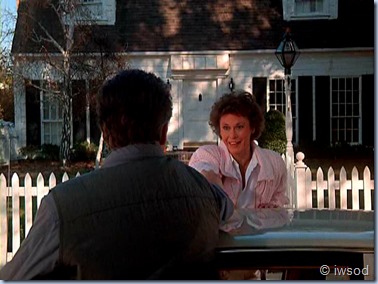 They start to drive off..

We see Lee is on his way to Amanda’s. Past the magic roundabout.. you know.. the roundabout that Lee has to go past nearly every time he drives somewhere in DC?! 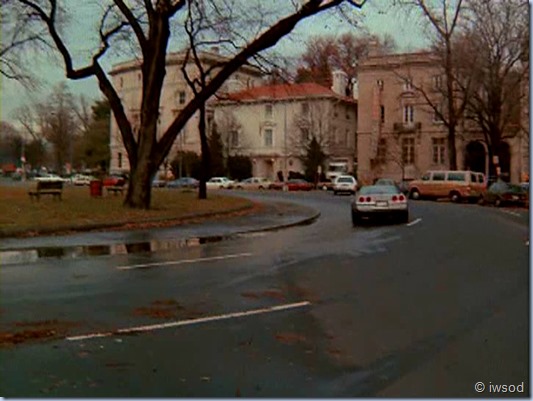 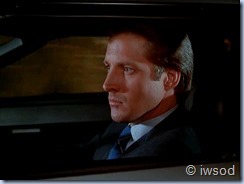 Of all the gin joints, in all the towns, in all the world, Amanda drives down the same street as Rick ( I mean Lee!) in the opposite direction with Retzig at the wheel!!!! Rofl!! gotta love that smk luck!!

Amanda is so funny!!! to Retzig: Wasn’t that Stetson’s car?

We see Lee do a dramatic u-turn.. just how did

he know that was Retzig or Amanda in the car?
oh whatever!
Lee is on it!!

Err sort of.. the vette seems to go a little goofy here!

Retzig: ah yes, Agent Stetson is running back up on this operation.

Amanda chuckles away..
Retzig takes a corner fast, trying to get away from ‘Stetson’

Ohhhh my goodness this is too funny.. I just love the look on Amanda’s face after he turns the corner.. she smiles and says: good driving there!

(Amanda is ever the encourager!! but.. oh no Amanda don’t compliment his driving!! he’s keeping you away from help!! None of this is in the script btw.. she quickly realises who he is so we don’t have this hilarious encouragement!!! what we got is so good.. well done KJ!) 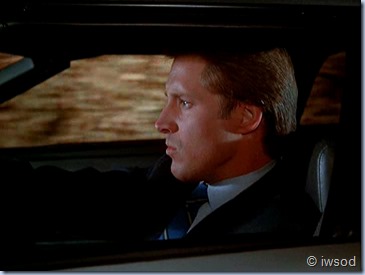 [after all, the vette ‘corners like a track racer’!]

Another screech, another corner.. Okay.. let’s finish this up now huh! Whoo someone must have heard me because they morph from suburbia to downtown and Retzig pulls into a car park.
Retzig and Amanda arrive at the warehouse.. Amanda gets out of the car and immediately

heads up the stairs followed by Retzig. Okay how did Lee know to turn down that street? Oh my.. I think we’ve just uncovered the agency’s dirty little secret! they’ve implanted a GPS tracker in Amanda!!! [that’s what’s really causing her loopiness!] how else could Lee have zoomed into that street and known where to go?!
Retzig gives Amanda an order: secure the inside. (Amanda pulls out her hairdryer and Retzig just can’t believe how she is behaving) …I’ll wait for Stetson!

[Amanda is funny.. but at the same time.. I do hate to see Amanda so vulnerable with the bad guy!!! Get him Lee!!! ]
Amanda: Right!
Amanda and her fully loaded hairdryer go 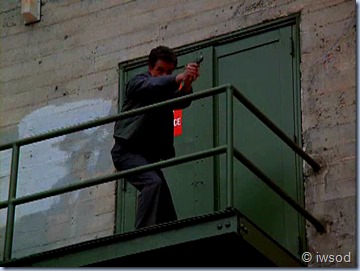 inside.. Retzig waits for Lee to pull up..and fires at him.

Whoooaaa how is it that first shot didn’t get Lee?!

Lee should be dead! This episode should have killed Francine with that vase, and Lee with that shot! And Amanda with her cartwheel!

it’s an episode of miracles!

Retzig goes into the warehouse with Lee in pursuit.. yeah I’d run away too Retzig, Lee’s magical with avoiding those bullets!

Lee rushes in.. love how he grimaces as the door slams behind him – announcing to Retzig- I’m here!!!! 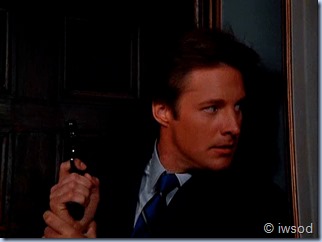 Gee Lee, what was it Billy was saying at the beginning of this episode?? about taking on Retzig without Backup??? oh yeah.. no it’s ok- Amanda is loaded and has a fully loaded hairdryer! 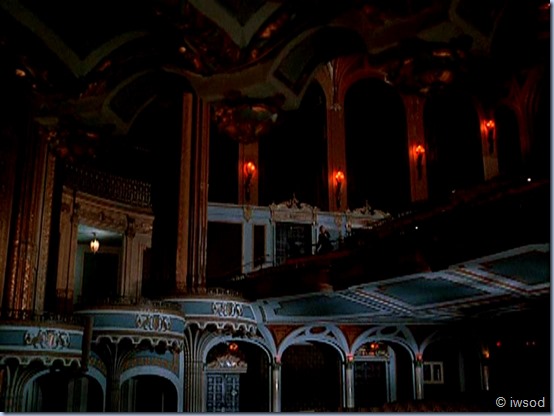 This is a gorgeous theatre! Anyone been there?? IMDB says this is the Orpheum theatre in downtown LA?? Lee wanders, waiting for Retzig to appear.. and giving us a lovely view of the theatre.. Lee ever the patient agent just yells out: Retzig!!! Let Amanda go she’s a civilian!’ [Like Retzig cares!] you’ve got no quarrel with her.

At this we see Retzig is wandering around behind the stage.. and Amanda is elsewhere..

Retzig responds: I make my quarrels with whom I please!

Amanda turns to look at Retzig.. and says: Retzig!!!!
She seems to realise for a second this is the bad guy. Not Niles Logan!!Amanda:that’s where I saw you at the hospital. 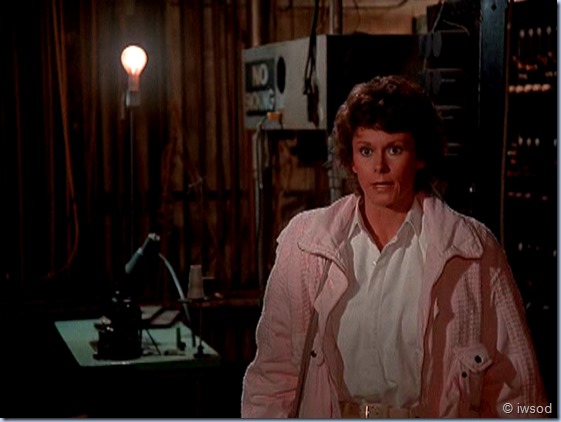 [Ahhh! so there’s the reason we needed Retzig to visit Amanda at the hospital.. even if I still don’t understand what happened there! ]
Retzig: Very good Mrs King. Now let’s be co-operative shall we?

He motions to his gun.

…I don’t want to use this, just yet.
Poor Amanda.. she’s scared again! Retzig gives her a shove to move off in the direction he

wishes.. LOL. suddenly Lee is up in one of the boxes?

I thought he was down near the stage?

I’m confused.. but my goodness this theatre is just lovely 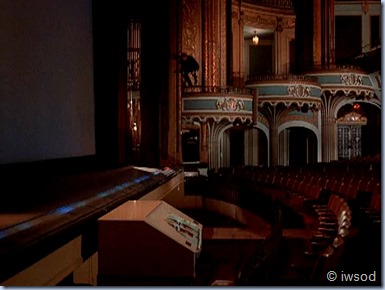 Lee jumps down onto the stage, and suddenly a spotlight shines in his eyes blinding him..

This is start to feel a little drawn out here!

Now that pic is just begging to be used for a meme!!
Lee jumps down off the stage into the orchestra pit for some cover… and dramatically shoots out the spotlight.

On go the bright lines on the floor blinding Lee..

Retzig: how does it feel to be centre stage? Mr Stetson.

Meh.. I do wish Retzig wouldn’t draw this out!

.. if your looking for me, try stage right. (so Lee turns right!) or I’m sorry. I get so confused. make that stage left. (so Lee turns left!! rofl!!!! Lee this isn’t one of those dumb smk baddies!! he isn’t actually going to help you catch him this time!!

Retzig isn’t stage left!! The bags full of powder start to go flying. LOL when Lee looks up it looks like he had already caught one.. his hair is pretty white!
Haa haaaa! that is so not Lee who gets whacked with the bag, that’s stunt Lee! 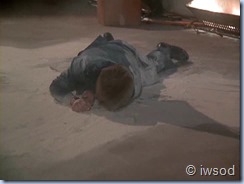 out of his hand and Lee is rolling in the dust.. you know for a guy who likes to look good – he does get himself into a few messy scrapes in the line of duty no? Makes me feel better about what’s ahead for Amanda!

Finally.. Retzig confronts Lee…
But… I better finish up here for now.. and I’ll come back with the final post for this episode very soon!
As always I’d love to hear your thinking! Byeee for now..