4/10 Season Two, Episode 20: You Only Die Twice–Scarecrow and Mrs King

She looks around holding up the newspaper obituary. No one volunteers an answer.
Amanda: Hmm?
Everybody is avoiding eye contact with her. LOL at Francine’s ‘eek’ face!

Lee: yeah sort of.
Ohhhh this makes me mad. Amanda deserves better than this! Is Amanda a part of the agency or not? Her life is turned upside down and she doesn’t even get a phone call. This makes me so mad! I think this kind of no man’s land for Amanda at the agency,  is going to need to be dealt with soon!!!
Amanda: well does this have something to do with a case?

Lee isn’t being forthcoming.. though at least he 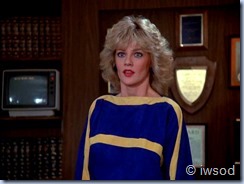 responds I guess!
Lee: Amanda, there’s been a foul-up here at the agency. 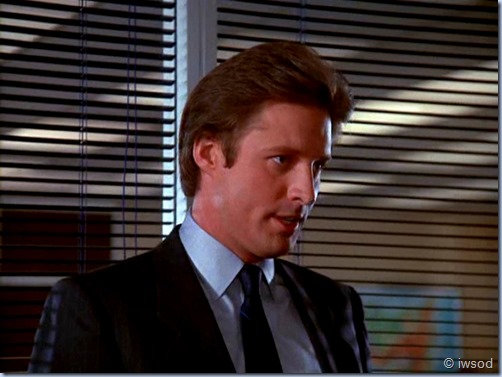 Amanda: Mmm Yes, I’d say there has been…

Amanda sees she’s getting no answers so bypasses Lee and moves over to address Billy directly. This is not okay. Go Amanda!

Amanda: …Sir, Excuse me. I know the regulations and all of that but I think on a need to know basis I think I needed to know about this one.

[Ahhhh Amanda’s turn for understatement!]
Billy is upset over Sylvia.. it would have been nice to see Lee or Francine step up here.. but no.. Billy hasn’t gotten his head around the situation at all yet.. Poor Billy!

Billy: Amanda we all sympathise with your situation but this whole situation has caused problems that we’re still trying to work out.
Amanda: yes sir, and I’ve got one of the biggest problems. According to this, I’m dead. 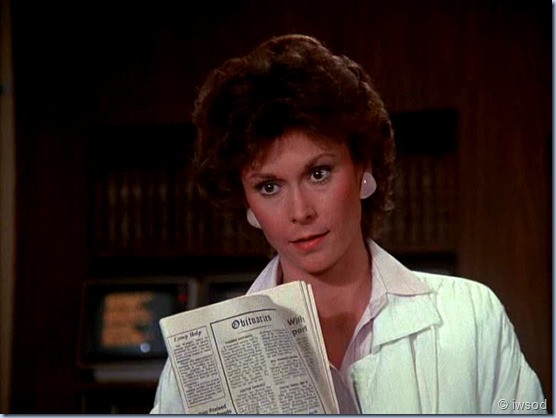 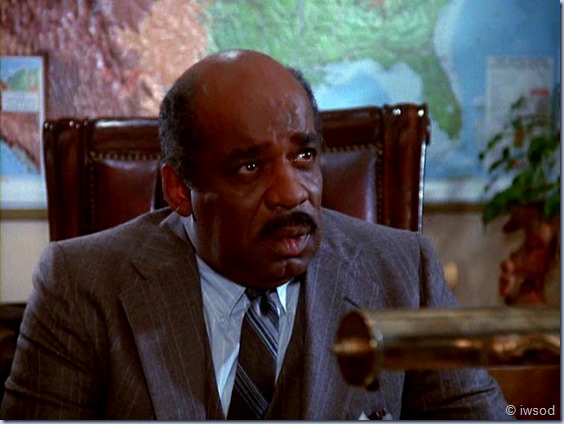 and he knows it.. 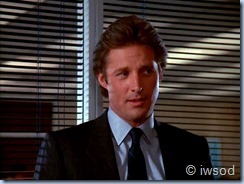 and Lee knows it..
Francine? well she’s probably not caring anyway! I love that Amanda doesn’t even look at her to see what she thinks

We cut to a commercial break here..
Amanda is being assertive huh! Great to see!! It strikes me that she is being assertive in the one area we’ve always seen her be assertive in: protecting what’s best for her family: the agency doesn’t realise it yet but this has caused her and her family huge problems and this is not okay!!!! I love to see Amanda not just take this lying down. 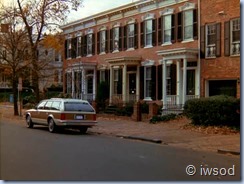 Back from the commercial break and for some bizarre reason, Lee has moved his car which was parked out the front of the agency and let Amanda park there instead

Oh dear.. they made this same mistake last week in DOA also..
Billy is on the phone to the newspaper..while Lee reads the obituary and watches Amanda pace.

Billy: If you’ll just print a retraction in your newspaper. no no no you don’t understand, Amanda King is not really dead!
LOL.. can’t IFF just pay the paper to print it? why does Billy have to beg? lol!
Lee  (to Amanda): Dead people don’t pace.

Hmmmm..
Billy on the phone: You see it was just a tiny little computer error.

Lee (to Amanda): See it was just a tiny computer error. That’s all it was.
[Dotty was right!] Amanda takes the newspaper and sits down. 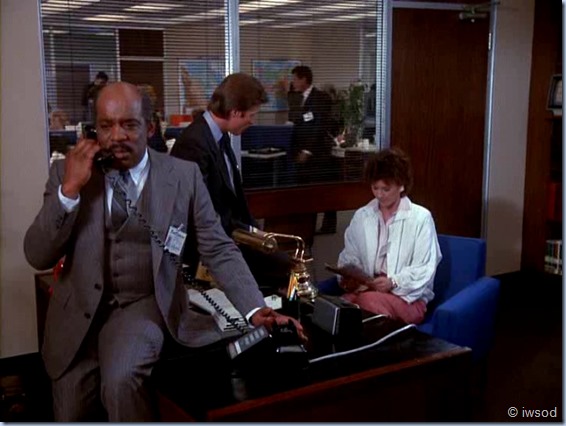 Lee: It could have been worse. The obituary could’ve been real. 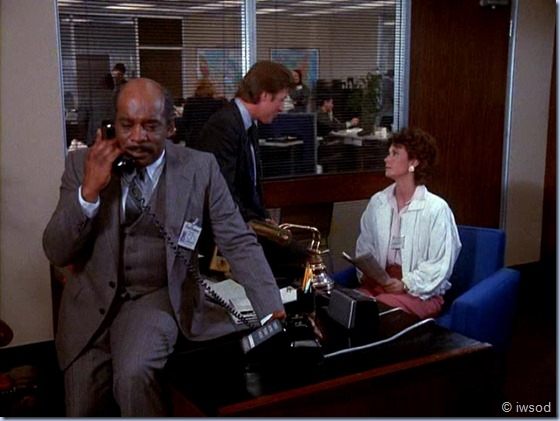 Oh nice one..meh.. Lee is trying to cheer her up.. find that famous silver lining Amanda knows he always finds ahem… but Lee really doesn’t understand the gravity of the situation for Amanda.

Amanda is not seeing the silver lining and quickly replies: Yeah well look, as far as my friends are concerned,

it is real. Do you know how many people called my mother this morning and sent

flowers?..
It was morbid. 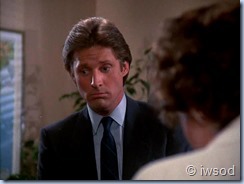 Amanda: I knew I was well liked before I was dead.

Amanda is serious and matter of fact about this. She sees no triumph in this knowledge or comfort. She only sees that people she cares about are upset.
Lee quietly looks at Amanda…

He looks away and quietly smiles. 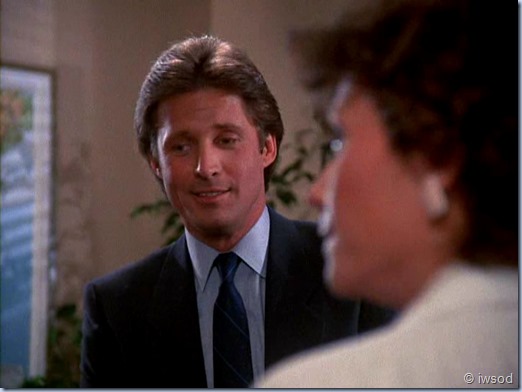 Then.. still thinking on what Amanda said I guess, Lee gives her a quick sideways glance while she isn’t looking at him..

Anyone want to have a go at what Lee was thinking in this moment? Do tell!

Yes go ahead and ponder about it Lee.. – she is a classy lady.. and you could learn a thing or two buddy. Lee likes to think Amanda doesn’t understand the seriousness of the spy world.. and maybe she doesn’t as much as him yet – but I’d say Lee doesn’t understand the seriousness of Amanda being declared dead for her and her family in the real world. I think Lee’s eyes are opened a little to the reality of a life full of family and friends in this episode.. and how blessed Amanda is- but she is also blessed because she values her family and friends and makes a place for them in her life- Where’s the place for that in Lee’s life?? This all reminds me of Lee’s funeral in Remembrance of things past. He didn’t mind Francine thinking he was dead! And tried to brush off how upset Amanda was at first over his faked death also.. .. and who showed up at his funeral?? some Internal affairs guy to say clichés.. it was depressing! Anyone else reminded of these things or have any thoughts on this they’d like to share? Gosh.. so much to think about already – and we’re only just getting started… [ BTW in the close up of Lee here – he is suddenly very very tanned.. almost like it was filmed at a different time! maybe they redid the look he gives her here – which is really quite lovely – do you agree?? He knows she’s right!

but also when it cuts to the wide shot, Lee is looking at Billy.. so glad they added this little look of Lee’s in- these small touches are what makes smk brilliant – would you agree??!! ]

Billy’s frustrations are rising as he yells into the phone: Okay okay! you can have that. we can send it to you in an hour. You’ve been very kind, thank you very much indeed. [lol Billy is being very ‘nice’ and polite here!

]
I’ll finish up here for the moment everyone..

Check out how different Lee looks! It was a very very long commercial break! Lee went out and got a tan

I’ll pick up right where we left off. whoooo so what do you all make of this eh?? do tell!!!! byeee for now!