Amanda is sitting in the semi-trailer pulling dirt out of 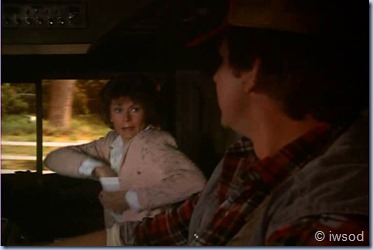 her pockets as she addresses the driver – LOL! She just dumps it on the floor of the cab!
Amanda: My name is, uh, Amanda King, and I gotta get to a phone. I have a friend who’s in trouble. 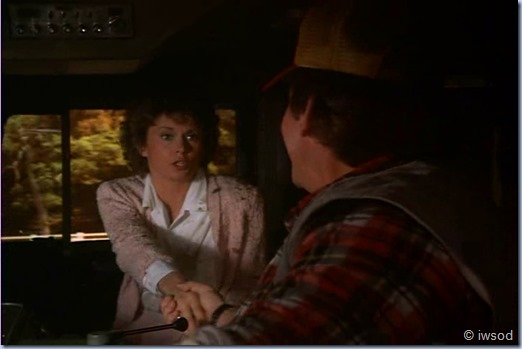 [Interesting.. he is assuming she’s a Mrs. LOL Travis is so normal here.. he’s lulling Amanda into a false sense of security!

]
Amanda: Thank you, Travis. I’ve got to get to a phone. I’ve got a friend who’s in some real bad trouble.

Travis: Phone? I’ve been up and down these roads since the flood, sugar. There ain’t no phones til we get to the city. 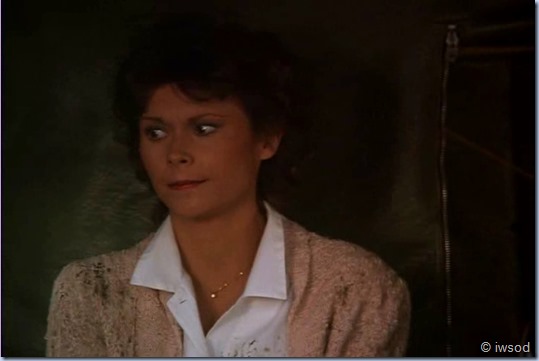 Travis: Now listen, don’t fret. If your buddy’s in real trouble, we can try to reach old Smokey on the CB.
[I love how Travis calls Amanda’s friend ‘buddy’ I don’t know why but it sounds funny to me! I don’t picture Lee as a ‘buddy’!  ] 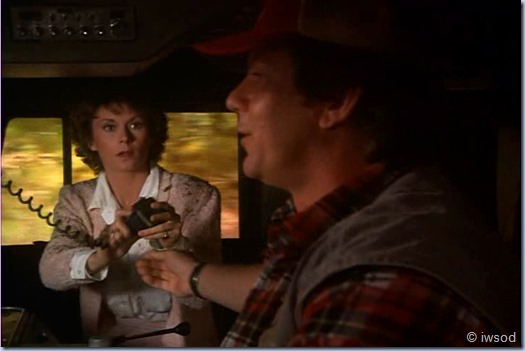 Amanda: Smokey? You mean the police. Look, can you get the CIA or the FBI on this thing?

[Ah!!! Okay.. sooo Lee is in trouble and Amanda wants the CIA or the FBI? Umm.. so what exactly is Lee? I guess Amanda couldn’t say: can you get the Agency on this thing?!

Maybe Lee is with the CIAFBI! or is that the FBICIA?!  Anyone?? ]
Travis: ha.. FBI? Your buddy must be in some kind of serious trouble. 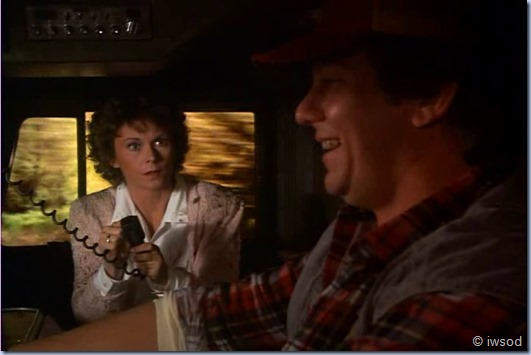 Amanda: It could be a matter of national security.

National security Amanda? hmm it isn’t really.. but that will do.. maybe indirectly it is.. Those two words seem to activate something in Travis! LOL!!! It’s like he’s been trained by Lester the duck ‘National Security’ turns Travis into a raging maniac with a passion for classical music and dramatics! Also love how Amanda says ‘could be’  so Amanda! She’s not exactly lying..
Travis: Na- National security?

Travis: You mean some pinko subversive has got their hands on your buddy?…

LOL Travis’ Mania is beginning to rise!!!
… And they’re trying to undermine our country?

Amanda: That’s not quite it!! but it’s real close!! 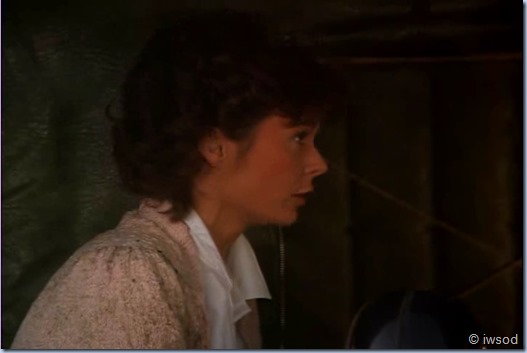 Travis: The hell with the police.

(Travis puts the CB radio away..)
…We’re going to kick some butt and take some names.

…Where’s all this going down?

Oh my gosh.. Travis’ dialogue is one big cliché and it is hilarious!!
Amanda turns to face straight ahead as she responds to Travis – like she can’t look at him.. she’s biting the bullet and telling Travis where to go- because she has no choice.. it’s this crazed patriot or nothing!!
Grab on to something Amanda!!

The beast has been unleashed!

Amanda blurts quickly: I heard something about a reservoir on Mill Creek!! 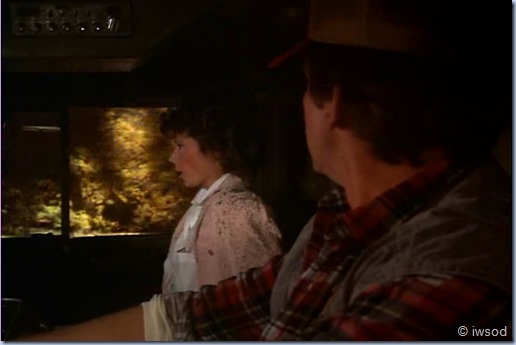 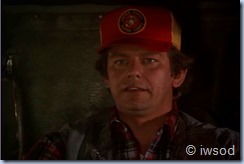 Travis: Mill Creek? The only thing I know out that way’s old cider mill, and I’ve been up and down these roads since the flood… 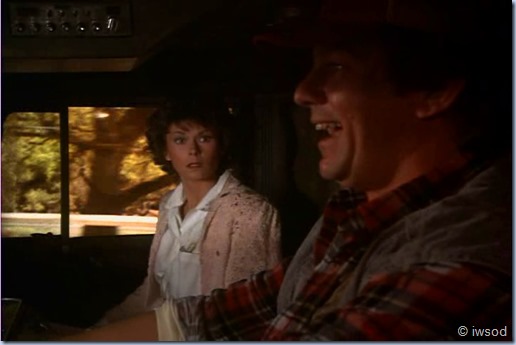 …Fasten your seatbelt, little honey. Travis is fixin’ to take you for a ride…

KJ’s face here is toooooo funny!!!! Ohhh how did they film this and keep a straight face??!!! LOL.. actually I don’t think they did!

Amanda desperately searches for that seatbelt she is suppose to tighten

but she finds she doesn’t have one! eek!! 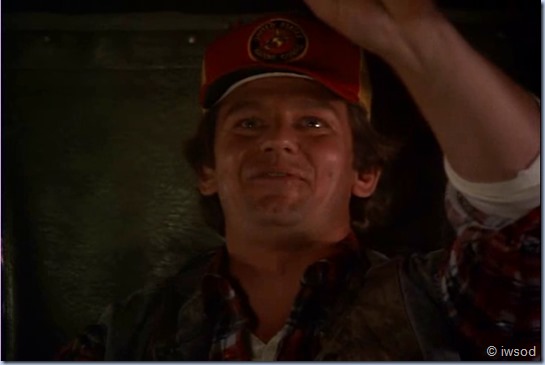 Travis switches on the music and laughs crazily!!
Thanks to Karen Rudolph [hiya Karen] I now know this classical piece is called ‘The Ride of the Valkyries” 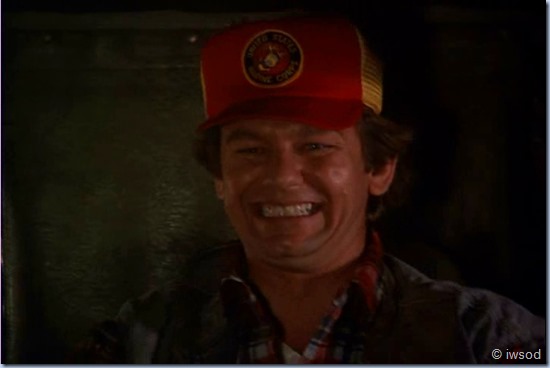 Amanda in response cries: I can’t find my seatbelt!

Such an Amanda thing to say!!!! I LOVE it!!!
Soooo funny!!!!! Actually when you slow this down, it looks to me like Amanda is only half terrified.. the other half is KJ just trying not to laugh!
Travis: Just grab on to anything!!!! 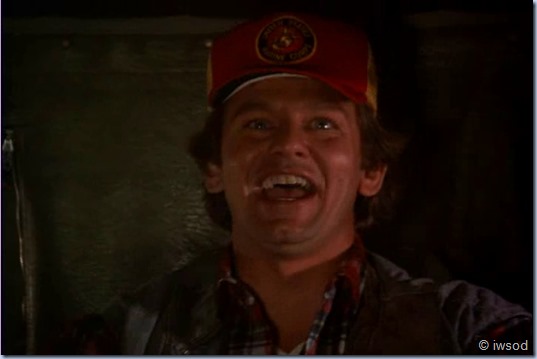 [I love how Travis’s voice has completely changed from the mild mannered trucker who said ‘nice to meet you Mrs King’!

The Semi’s horn blasts as it zooms down the road toward Mill Creek Reservoir!

You know the last time I wrote about Travis I didn’t find him that funny – man.. what was wrong with me?? This scene with Travis and Amanda is flippin hilarious!!!! The Stereotypical patriot trucker is sooooo over the top it can’t possibly be taken seriously – it is pure farce and a brilliant way to inject some lightness and humour into what has been quite a dark episode up to this point!!!
Gooo Travis!!! I also love love love to watch KJ trying not to crack up laughing – I think Amanda’s terror here is so funny because it is such a ridiculous situation.. I can’t take it seriously, and so I’m free to just laugh away! The guy playing Travis (Ernie Lively) really goes for it and holds nothing back.. he really makes this Travis character hilarious! IMDB says he is Blake Lively’s dad.. haaa she must be soo proud

I’ll also add that Travis reminds me of something I saw on Horrible Histories: He’s a Beserker! Working himself up into a frenzy in preparation for battle..
Here is a clip of the Beserker I found on youtube..

The vid, a sports segment on ‘Viking Feuds’, explains perfectly what Beserkers did.. Is Travis a wolf or a bear?! [I guess bears are Russian- soooo he’d be a wolf! LOL!!]
Do watch the vid if you have a moment- it is funny and explains Berserkers – the special Viking warrior

[You stupid moose face! What?!

BTW- I did some checking- ‘The Ride of the Valkyries’ is famously played in the Movie ‘Apocalypse Now’. During a helicopter strike on Vietnamese locals – they drop napalm gas and play Ride of the Valkyries over the helicopter loudspeakers!!!!
[Wagner would roll in his grave!]
Sooo SMK is doing a very non subtle spoof of Apocalypse Now here!!!
It’s been ages since I’ve seen the movie, I’ve seen the redux version. I think most people know it.. The movie is an iconic Vietnam war film – and I think this is the

inspiration for the Travis character..
I think Travis is the smk version of Lieutenant Colonel Kilgore

– A famous quote is coming up in the next post from Travis.

I do find it interesting that the main character in Apocalypse now is a soldier sent on a mission to assassinate a rogue general – this character, played by Martin Sheen and called ‘Willard’ is basically a Burn Out – he has 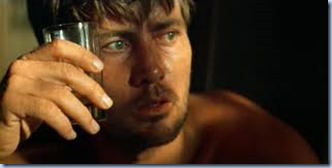 PTSD. He’s very mixed up and burned out by the demands of his job – Think there is a message in that?? That they allude to the famous movie Apocalypse now?? Which is all about the cost of doing battle? The Horror.. the horror.. The human price? I find this interesting- and for me it underlines the message of the episode that if Lee isn’t careful he’s going to end up like Willard..who is ‘hollow at the core’- a theme of the film [Like Lee, he is a killer and the job demanded he become a killer].. A very powerful and dark film. This episode sent Lee to a very dark place also.
Anyone seen Apocalypse Now? Anyone see parallels between the film and this episode? Besides the hilarious spoof? [BTW- smk refers to this movie again with the episode ‘Utopia Now’ –we’ll get there eventually!]  Sorry to digress, but I find this fascinating!

We cut to the armoured vehicle arriving at the Mill – hurry sugar! It’s nearly time for Lee to ‘meet his predecessors’

Quickly, back to Amanda and Beserker Travis..

Amanda yells over the music: Don’t you think we should notify the authorities first? 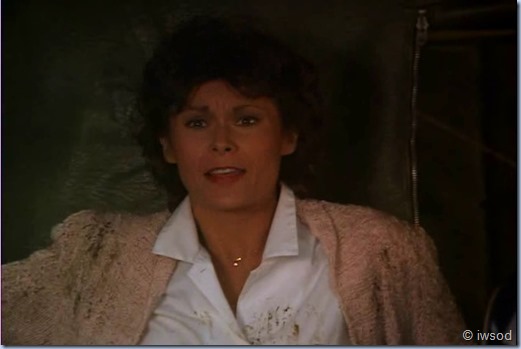 Travis: We’ll let them do the moppin up… 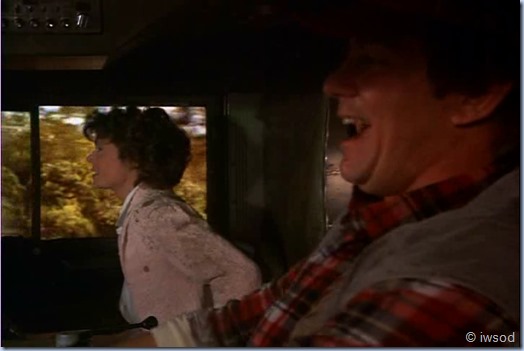 Whooo Travis comes from the same school of thought as Lee.. he likes to let his occasional back up (his boss Billy) do the mopping up too!

Travis holds his baseball hat out to make his point.. 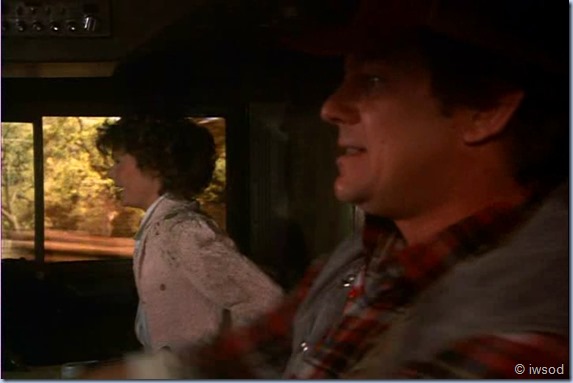 Amanda: Aaaaahh!
Rofl!!!! this has me in hysterics!!! Amanda’s sobs here are hysterically funny!  KJ is trying soo hard not to laugh – that it just makes it all even funnier! I bet there are some brilliant outtakes of this scene somewhere!

I’ll stop here before they arrive at the reservoir for the final showdown..
Hey Readers!! My Fellow SMK Fans!!! Do share your thoughts! any questions? Insights? complaints? Anyone not find this funny?? or like me, didn’t get it at first but have grown to love it?? Or.. anyone love it and now hate it?! Do tell!!!! Okay bye for now!!