We see Elizabeth and her husband Eric through a two way mirror?? is that a visiting room? or a questioning room?

I don’t know what it is.. but it’s not a happy place!
We see Lee and Amanda exit from another room in the police station.. Amanda is worked up!
Amanda: but I don’t understand. How can they arrest her. We saw that guy and we even got part of his licence number.

Lee: the police found Magnusson’s diary when they searched his apartment. It implicated Elizabeth up to her neck. 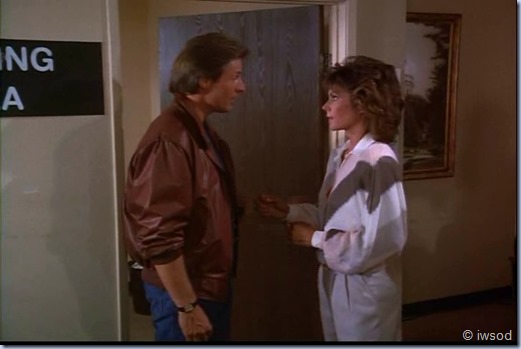 Before they walk towards Manny.. Amanda lets out a deep breath and gets herself together… the message Lee seems to be sending  IMHO is- behave Amanda.. tread carefully

here..
They greet Manny. Manny is enjoying that his job is crazy, sometimes someone confesses and makes it easy, but sometimes it’s ‘ a can of worms’. 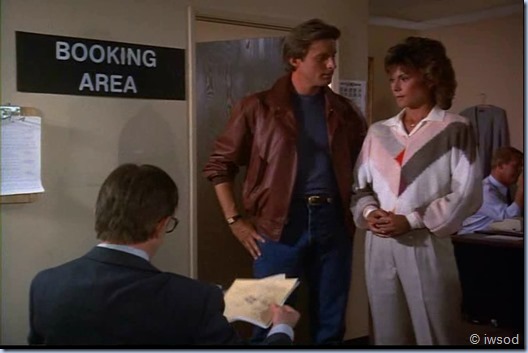 Amanda jumps on this passionately: well if all you’ve got is a can of worms then why did you arrest Elizabeth?

Lee warns Amanda: Amanda. Magnusson’s diary is the kind of evidence that makes US attorneys sit up and pant. 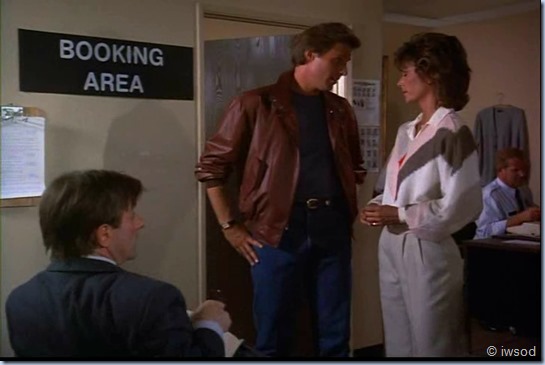 Seems Manny isn’t completely stupid: Still, that’s a good question. I mean a con on the loose, he doesn’t usually write everything down.
Go Manny! Like you again!! 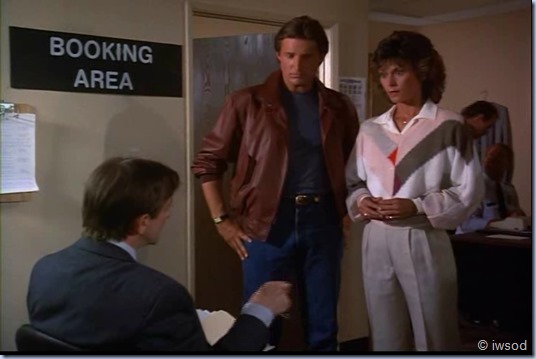 To me it sounds like he’s thinking yeah-didn’t think of that! 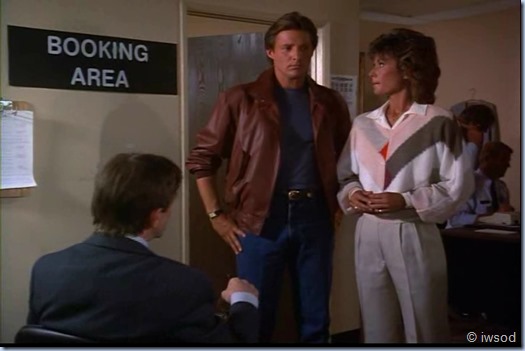 Manny stands up: if you want to see her I’ll fix it.
Amanda puts her hands out to stop Manny, with a quick look at Lee.. yes she knows she’s pushing it, but this is important!

Amanda: Ah excuse me. But, why did you call Mr Magnusson a con?

Lee: Well, Magnusson wasn’t really his name. It was Richards, he escaped from leavenworth two years ago. 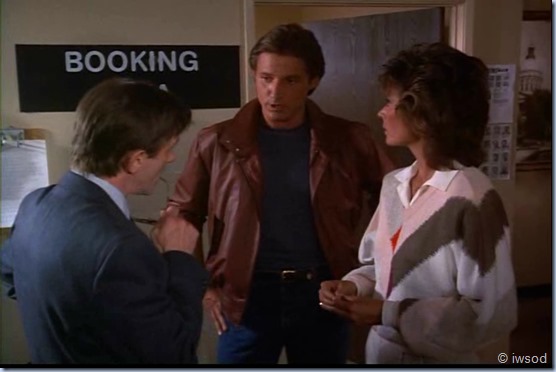 [gosh Lee, so why did you just call him Magnusson then? and why didn’t you tell Amanda that already?! lol guess he had to tell Amanda ‘in front’ of the audience.. tee hee.. like how I talk about them like they are real?! … I’m a very sick girl.. 🙂 ]

Manny: Elizabeth Sullivan found out and was blackmailing him or something. [Oh Manny how do you say that with a straight face?! They know there is a 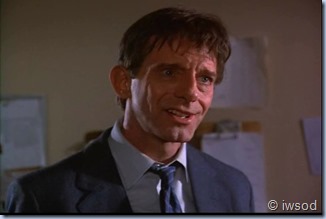 third party involved – because he got Lee in the face with the fire extinguisher! ] ... at least, that’s what it says on the charge sheet. It’s very weak.
Amanda can’t understand why Elizabeth is in jail if it’s so weak.

Manny responds that he dusts for prints and asks questions.. it’s the stupid US attorney who decides if there’s a case or not. Well.. where is he or she hmm??!! Let me at them!!!!

Did Manny dust those documents at the Save our Bay office that implicated Elizabeth? if he did, he would not have found any of her prints on them! screams setup- honestly!
Okay everyone.. which setup is lamer-
Amanda got him with the steak knife after dinner when she rejected his advances??
or Elizabeth got him by planting a bomb in her own baby’s baby carriage, when the guy was going to give her back her business?
or.. Elizabeth was blackmailing Richards so he blew up Rawlings and then went back to his apartment to be happily questioned by police? whahahaaa..
okay.. they are all really lame! But KC’s cry of ‘flying lettuce’ does make me prefer the MBF set up! 😉 good one KC!
I digress!
At least Manny is being friendly with Amanda.. Lee need not have worried about touchy Manny – I think he’s only touchy with Lee!

Lee and Amanda are led in to talk with Elizabeth and Eric. 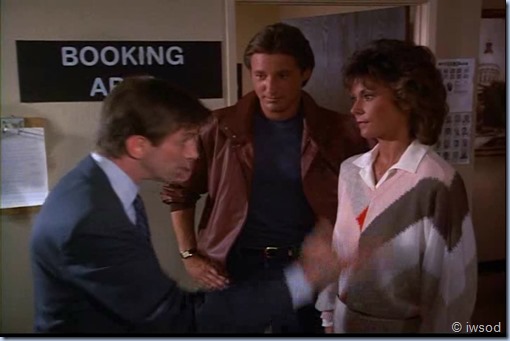 Eric is mad!
Sooo the cops came to arrest Elizabeth at 5am- ouchy.. 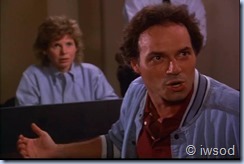 and Elizabeth has been arrested for two murders?! oh rofl!! she stabbed Richards?? too ridiculous! She tackled Lee and got him with the fire extinguisher?! Gosh I hope Amanda the encyclopaedia lady can help them!

Lee attempts to make them feel better: It’s preliminary
cases like this are volatile… 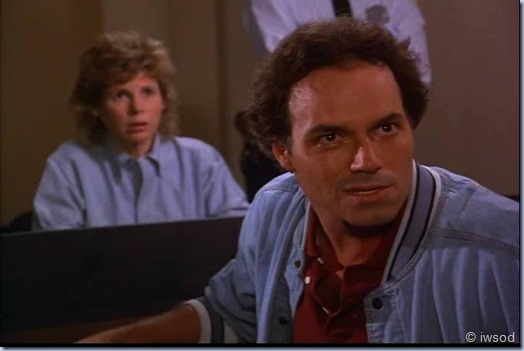 …and we’re going to do everything we can to help you I promise. 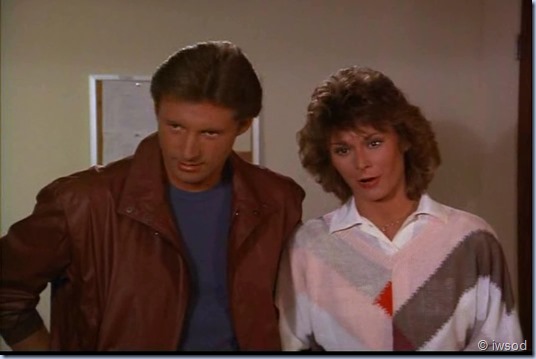 [We? the encyclopaedia lady Amanda is gonna help?

I haven’t previously noticed Lee being especially obtuse with his explaining.. ahem.. but.. I guess this is the start of that story arc where Amanda, a normal person with people skills, teaches Lee the spy who is not normal seems to loose what people skills he had previously.. feel free to disagree but I’ve always felt this difference in them was further expanded on in season 3 to give Amanda a point of different more so than in seasons 1 and 2.. but.. I’ll go with it!]
Okay here’s a question.. and asking not as a test but I’d like to know the answer! I vaguely remember Amanda telling a third person not to worry because Lee and her were going to help them or something – and Lee says under his breath ‘thanks a lot’ – like he can’t get out of it now.. where and when was that?? anyone??

Manny returns and says there are 11 possibles on the partial car number plate Amanda got off Tarzan..

Next thing we cut to the corvette busy trackin down

possibles.. love how Manny’s comment that ‘it could be any of them’ sounds soooo different to his previous line of his dialogue (added post production!)..
Lee and Amanda head off to track down all the 11 possibilities –but a voice over from Lee updates us.. they’ve found 8 dead ends.. and only 3 more to check (whooo Lee can do the math!

)
We see them arrive at Glengarry Meadows rest home,

Is that Duffy who gives them directions? LOL.. now every guy with grey hair looks like Duffy to me! Amanda greets all the elderly residents as they wander looking for their ‘suspect’! 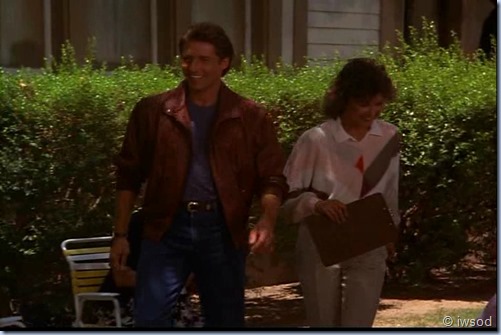 They come across an elderly lady gardening.
Lee: Excuse me! May Carswell?… 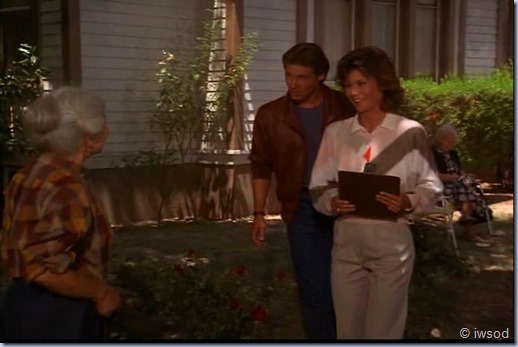 …Yes, I’m Lee Samson (whoo such a strong name!) and this is Amanda Smith.

(too funny.. do you remember when she checked in calling herself smith?? with a y ?? and.. an e?? I wonder

if this is a shout out??!!!)
May smiles to greet them as Lee continues his spiel: we’re from ah er senior’s outlook magazine.
Amanda: we’re doing an article on senior’s 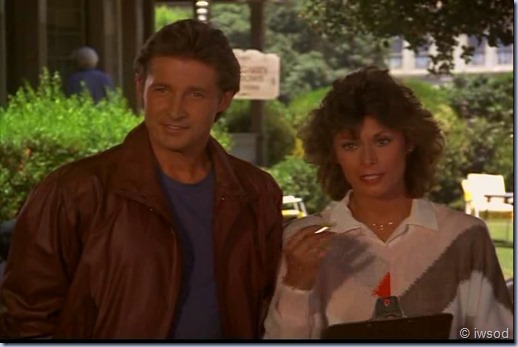 …and their cars. Where they drive, what they drive.

May laughs: drive?! I haven’t owned a car since I retired. 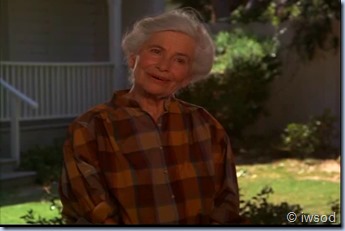 May: Ohhhh yes.. until my bursitis got me so gimped up that I-

(she cuts off a flower) 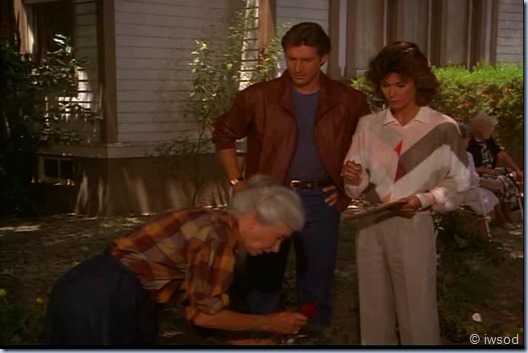 …I wasn’t safe at any speed!
May passes the flower to Amanda and they laugh… 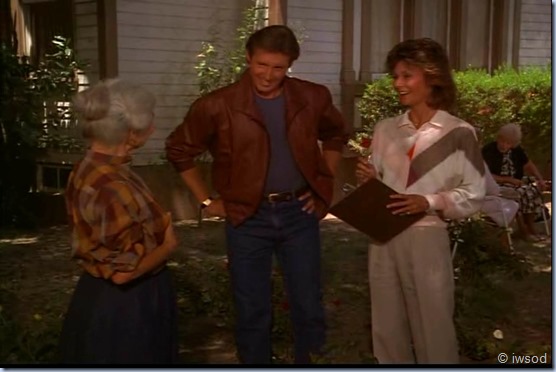 Ok.. transoceanic industries managed to get this lady’s car by offering her a minibus service or something.. sounds weird. whatever.. 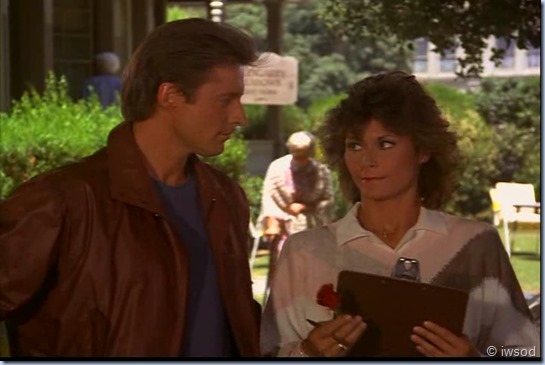 Love the look Lee and Amanda share on hearing the name ‘transoceanic industries’!

Just love how May is sooo cranky at the aphids.. all the way over theeeerrre!!
May: Ohhh!!! would you look at those aphids! I warned them… those!!!! (she walks off to kill all the aphids..)

My what great eyesight she has!

Amanda and Lee move to the side to stand very very close together and discuss..

Amanda: Elizabeth told me that Rawlings and Transoceanic were like peas in a pod. 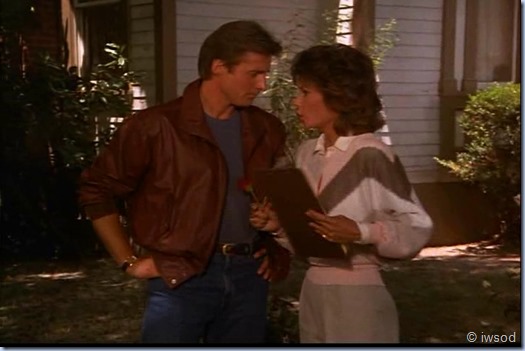 I just gotta include another pic.. 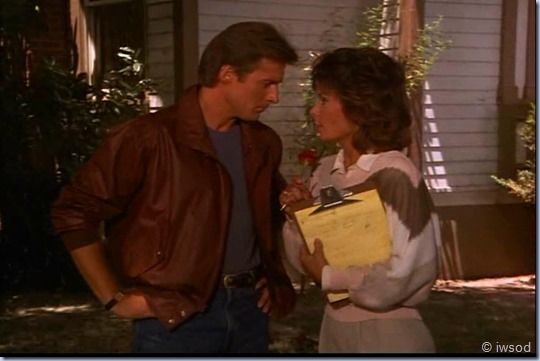 And another.. Love how the shot zooms in on Lee and Amanda standing so close

Lee: but he had more to gain by keeping him in office in that company that’s for sure.

Lee warns Amanda that the murderer will be heavily inside trans oceanic.. and is she sure she wants to go through with this? [through with what? ] 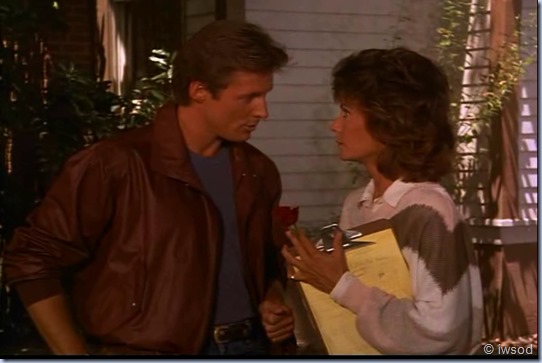 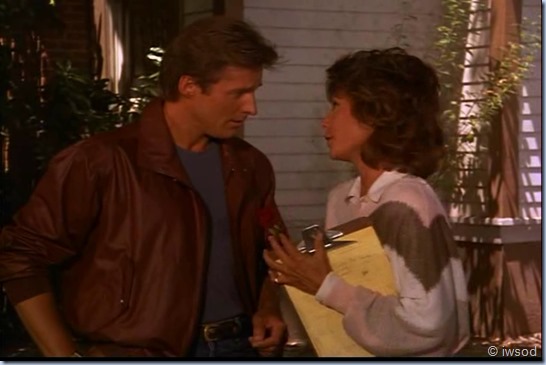 …I can still flirt pretty well when I want to. 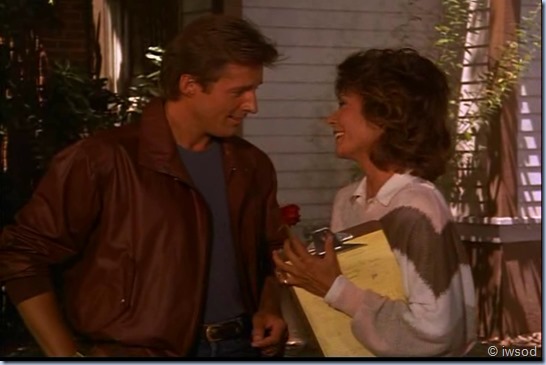 [When Amanda wants to. I like it – she isn’t indiscriminate…. she is intentional- and picky about when she flirts – if Amanda flirts with you, you’re  a  lucky guy! Pay attention Lee!]
Amanda laughs and looks at the rose. 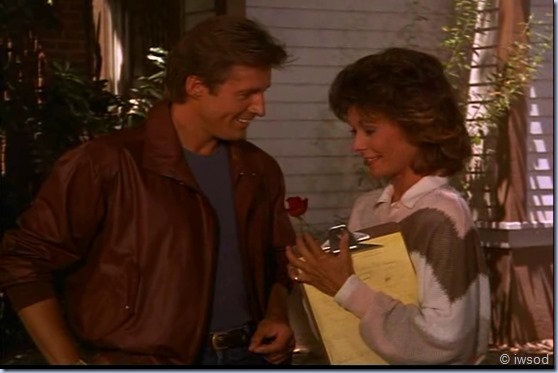 Lee smiles at Amanda..
Amanda then hands Lee the rose

Lee looks at the rose..

She’s cheeky Lee! You know what I like about this?

To me, Lee seems surprised by Amanda here. but also seems to tell himself- I should have known!
Yeah.. I know.. I can read a lot into an Ohh hoo hoo! but.. well.. it’s the body language that goes with it!
Do tell us what you think is going on here!

This plays nicely into the whole idea that Amanda had been suppressing her sexuality of late.. here we see Amanda beginning to ‘bloom’ – handing the flower to Lee and flirting, but also professionally stepping up to the challenge that is ahead of them – finding the murderer in transoceanic!

At the same time… while Amanda flirting with Lee is great.. what’s that got to do with transoceanic? did we miss something?? it’s like they’ve had a conversation about getting into transoceanic that we didn’t hear… Time to check the script in desperation! 😕
Okay, the  script has these two exchanging these lines not straight after talking with May Carswell.
Instead, they exchange these lines after having travelled to Transoceanic and clearly discussed their plan on the way there – and Amanda says this right when she is about to infiltrate transoceanic..now that makes more sense to me! I guess doing the lines at the rest home let Amanda give Lee the flower!

Was anyone else confused by this?? [and I don’t just mean because it was swoony and cute!

Oh BTW- it’s official!!! I loathe the editor of this episode!!!!! First he sticks a tree in front of Lee when he says she sure looked beautiful- and now? He fades away as Lee takes the rose and reacts!!! ‘He’? you bet! No woman would have cut those swoony moments!!!

Oh well…. I’ll include it anyway.. 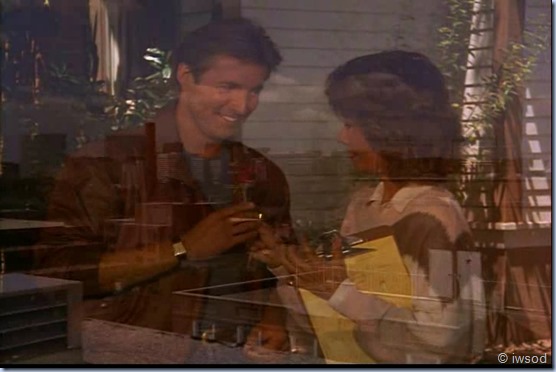 His smile getting bigger and bigger as he gets replaced by a flippin transition shot- boo!!

I feel like yelling at the screen-come back! come back! 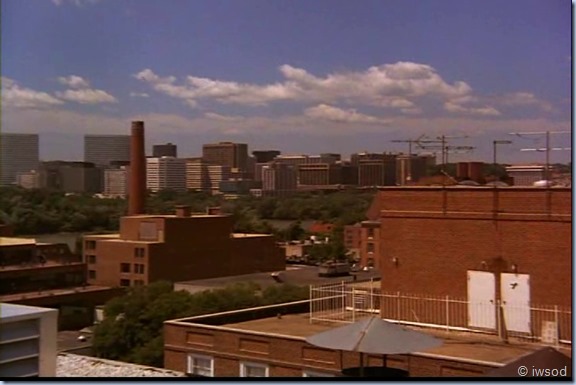 Hey this will be fun.. if you scroll down the webpage it will be like you’re watching it

I neglected to add Lovesmk’s gorgeous banner to this post, so in future people will be able to see the corresponding banner.. Here t’is!